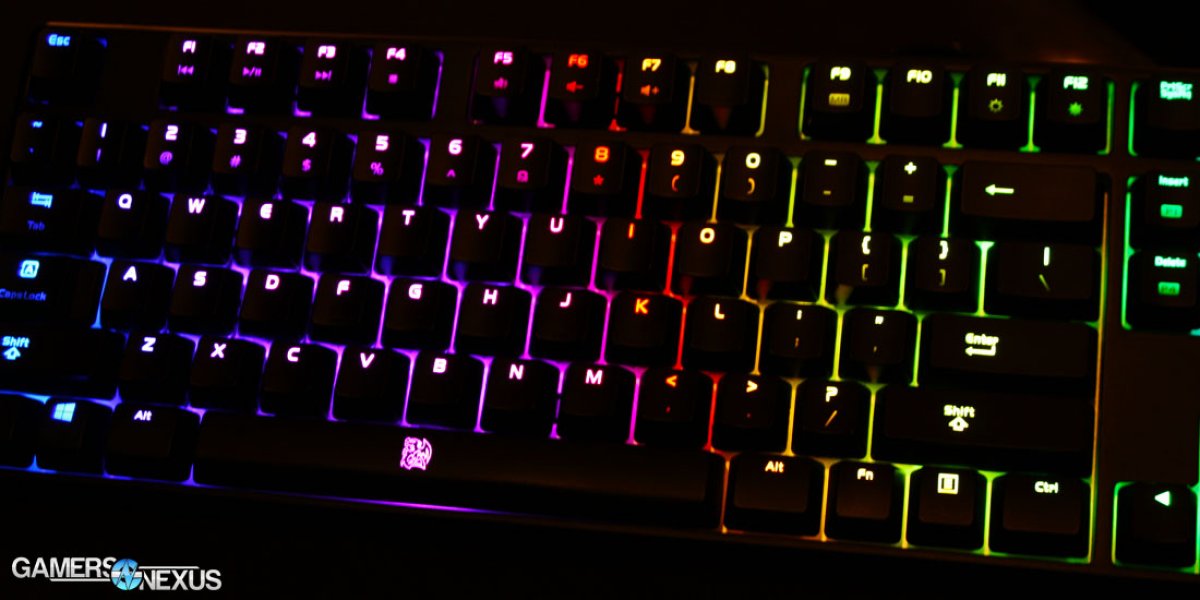 The commonality of RGB lighting in PC components seems to be ever increasing. Despite its rise to ubiquity, RGB LED lighting is still a feature that isn’t included in budget products; for this reason, products that incorporate RGB lighting at a reasonable price point are particularly interesting.

The Poseidon Z RGB keyboard we received uses Thermaltake’s “Certified Brown Mechanical Switches.” More simply put, these are are Kailh Brown switches. While Thermaltake doesn’t boldly advertise the fact they’re Kailh, it does say so on the back of the box; it’s acceptable for Thermaltake to very loudly brag about their “certified switches,” but I do dislike that it is not made obvious on Newegg, Amazon, nor Thermaltake’s website, that these are Kailh switches. This information is important to keyboard enthusiasts.

The Kailh Brown switches are largely without issue, although I’ve found that some switches on the keyboard are noticeably rougher – in terms of friction when actuating – than their neighbors, producing a friction inconsistency switch-to-switch. This isn’t obvious when typing, but can be noticeable while gaming. In real-world use, none of the key switches are significantly different feeling, although the subtle inconsistency is unencouraging for quality control. I have also had annoyances with what’s often referred to as key chatter (which is the springs in the switches resonating when pressed), especially so with the spacebar. The spacebar pings when hit harder, making furious FPS jumping result in “pings.” Other than this, the Thermaltake Poseidon RGB has performed admirably for typing and gaming.

Admittedly, these are minor disparagements against an otherwise reasonable keyboard. Key chatter and trivial switch actuation inconsistencies are items with which only a serious keyboard enthusiast should concern themselves; for the buyer seeking a gaming keyboard with lights and mechanical switches, the Poseidon Z RGB still has many facets to explore. Let’s dive into those.

The Poseidon RGB has 6-8 key rollover with toggleable NKRO, making key rollover a non-issue. The media keys are numerous and useful, but some are in uncomfortable positions. There are function keys for brightness, volume, skipping, pausing, profile changes, NKRO, and macro recording. All work as expected and my only issue is the position of the skip, pause, and stop function keys. The “Fn” key is located in the bottom right, but the media keys are in the top left. This requires some serious hand stretching or using both hands to use the media keys. For commonly used function keys – such as media keys – a better place would be directly above the function key so they can be pressed with one hand comfortably. Another minor issue, at most. 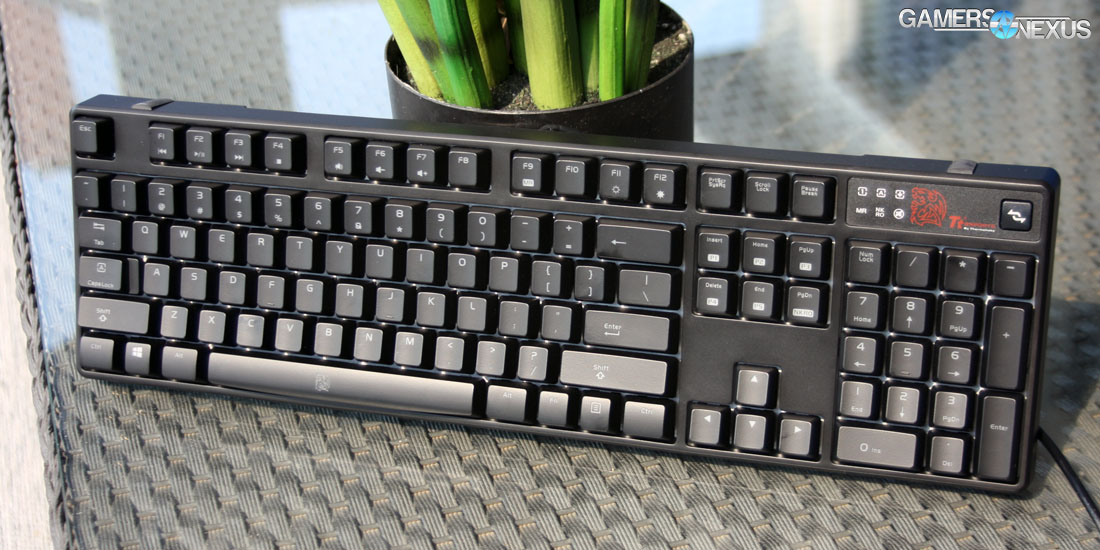 The Windows disable “Gaming Mode” works as expected – no surprises there. More significantly, the macro function also works well. Gamers who find themselves entrenched in MMORPGs, we’ve found, will most directly benefit from macro functionality. Other users, like those who perform production tasks in workstation software, can leverage macro configurations to execute shortcuts for quick edits.

The keycaps on the Poseidon Z RGB are standard for mechanical keyboards. They are thin, painted ABS plastic keycaps with legends made by paint exclusion, allowing light to shine through the legends. The space bar is actually a bit unique, as it has a rounded edge on the side facing the user. This provides a much comfier typing experience since my thumb rests and presses on a rounded surface rather than an angular one. Thermaltake’s space bar’s rounded front is a small detail, but is noticeable and preferable.

While I am fond of Thermaltake’s space bar, I’m not fond of the non-standard keycap sizing. The non-standard spacing makes replacing keysets much more challenging, and means that aftermarket keycaps may not work standard with the Poseidon Z. 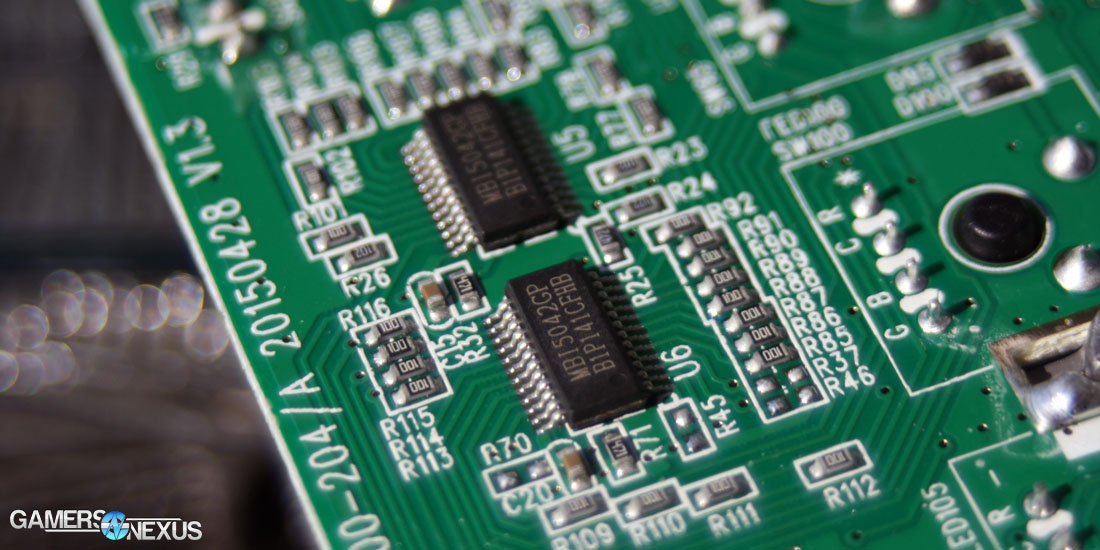 The RGB lighting is bright, vivid, and well-blended. The white is mixed cleanly, although it looks ever-so-slightly blue to my eyes. The dull silver colored metal backplate helps to reflect the RGB lighting, evening distribution and helping to diminish shadows that are a result of the top-mounted LEDs. 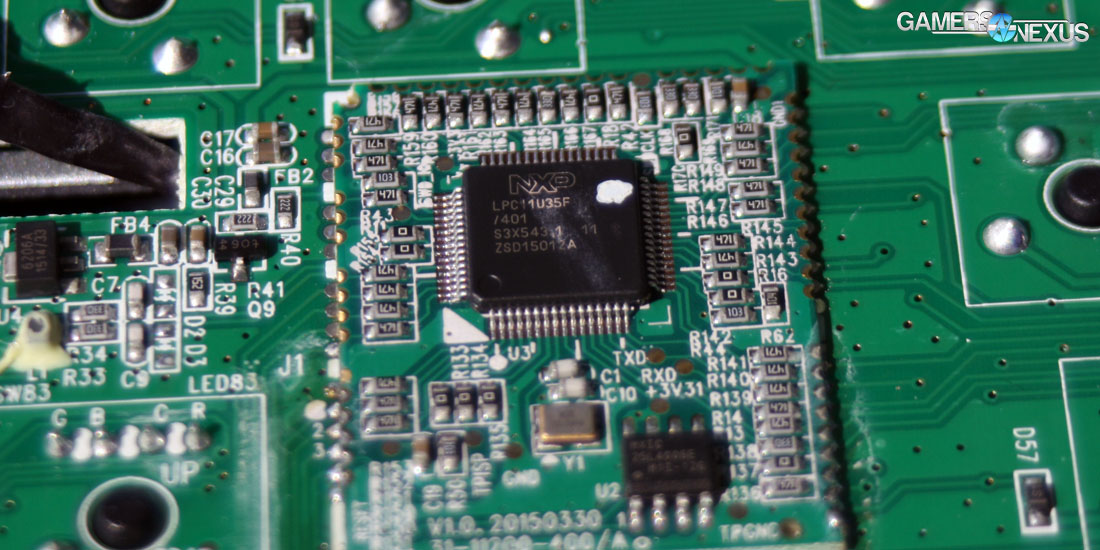 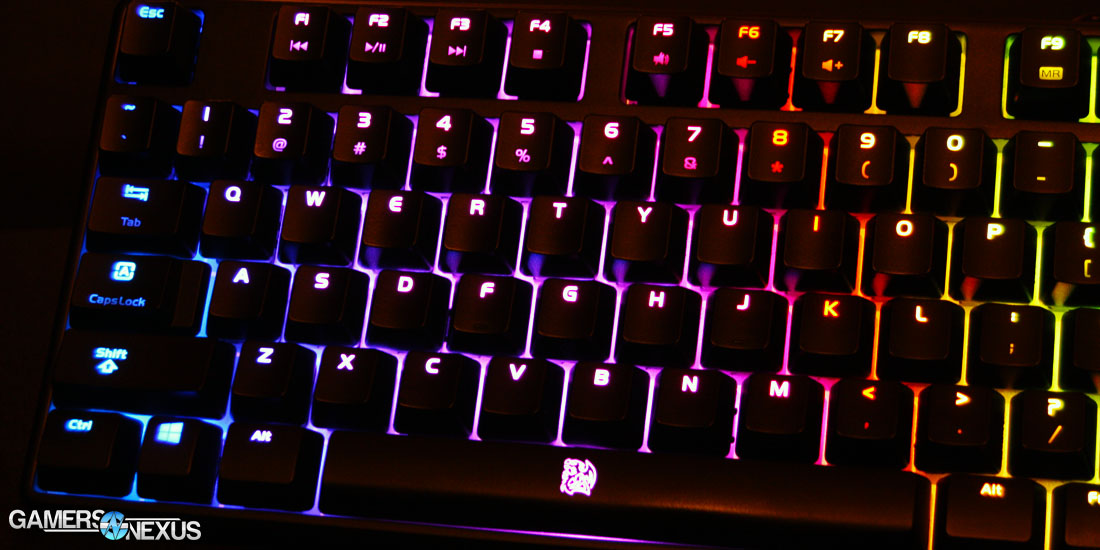 Each red, green, and blue LED has 256 different levels of brightness (including off). For this reason, there are approximately 16.8 million colors available -- actually just a little under that, since 256^3 is 16,777,216. The point is, though, that there are a lot of color options. These lighting options include static lighting, fade, wave, ripple, reactive, and arrow flow, all with sub-options such as speed and color. The Poseidon Z RGB doesn’t support as much lighting customization as some other keyboards (the Logitech G910 or Corsair K70 RGB), it is still reasonably customizable. The lighting configuration is stored on the keyboard rather than constantly communicating with its drivers, which allows it to move from computer-to-computer without losing its settings.

I have noticed one peculiar side effect of lighting. When LEDs are turned on, there is a quiet ringing – like coil whine. I have to put my head next to my keyboard to hear this, so it’s not a real, tangible issue, just a strange quirk.

The Thermaltake Poseidon Z RGB’s main issue is software. Keyboard utilities need not be perfect, but they should reasonably useable. Thermaltake’s Tt eSports Poseidon RGB software has the ability to set color, animation, profile, and record macros. The problem is that it is rarely as easy as it should be. On occasion, the software will work perfectly but, more often, they cease function for any apparent reason. Opening the software, of all things, is sometimes an issue. Often when clicking on the icon in the taskbar, the tool kit simply won’t open, or will wait an inordinate amount of time before opening. Even when it opens, I’ve had the software stop responding many times even before I press anything. Often it will stop responding or crash when trying to set lighting effects, making for a frustrating effort.

Furthermore, I’ve had the utility simply not work when applying lighting settings, requiring exits/reopens to take hold. The plus side is the software is decently intuitive when it does work, and performs valuable functions to the keyboard. The macro recording has worked fairly well for me and profile switching is easy, especially with the function profile keys. 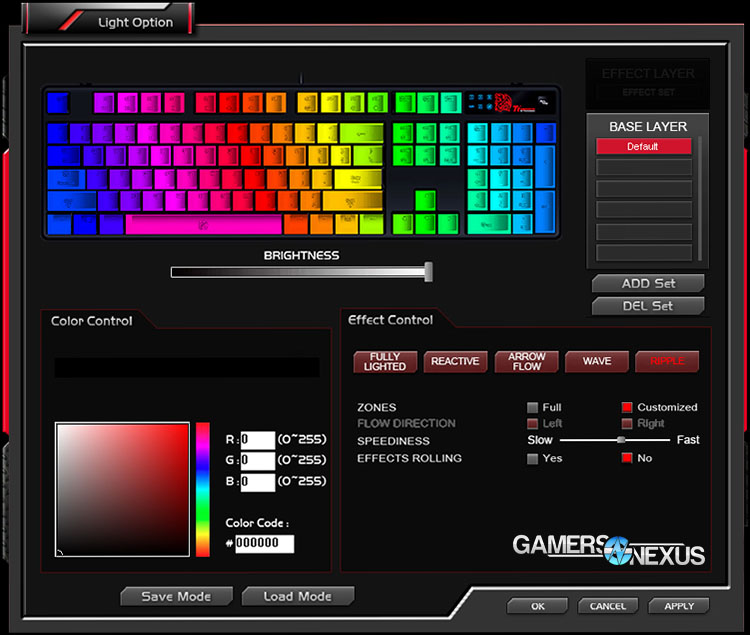 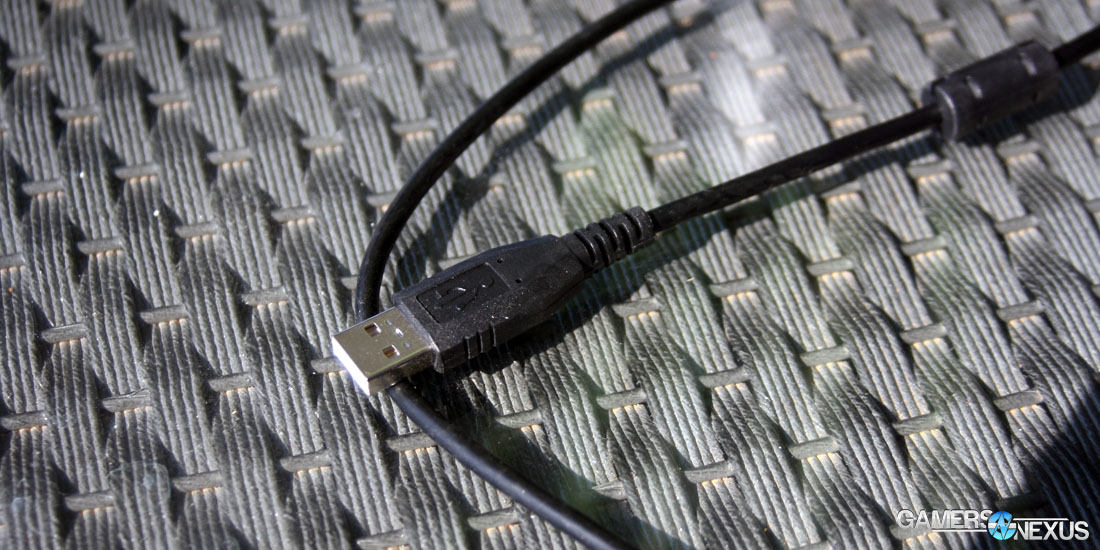 The external build quality of the Thermaltake Poseidon Z RGB is sturdy and truly without flaws. The Poseidon Z is plastic, which is common at this price point, but this plastic doesn’t scratch easily or collect grease quite as aggressively as other keyboards.

The USB cable is a cheaper rubberized plastic material, something I’m less than fond of on a keyboard this expensive. The USB cable also comes out at the top of the keyboard, which makes using the integrated cable management channels cumbersome. A much better solution would be to have the cable coming out right above the Thermaltake logo, so each cable management channel could be easily used. 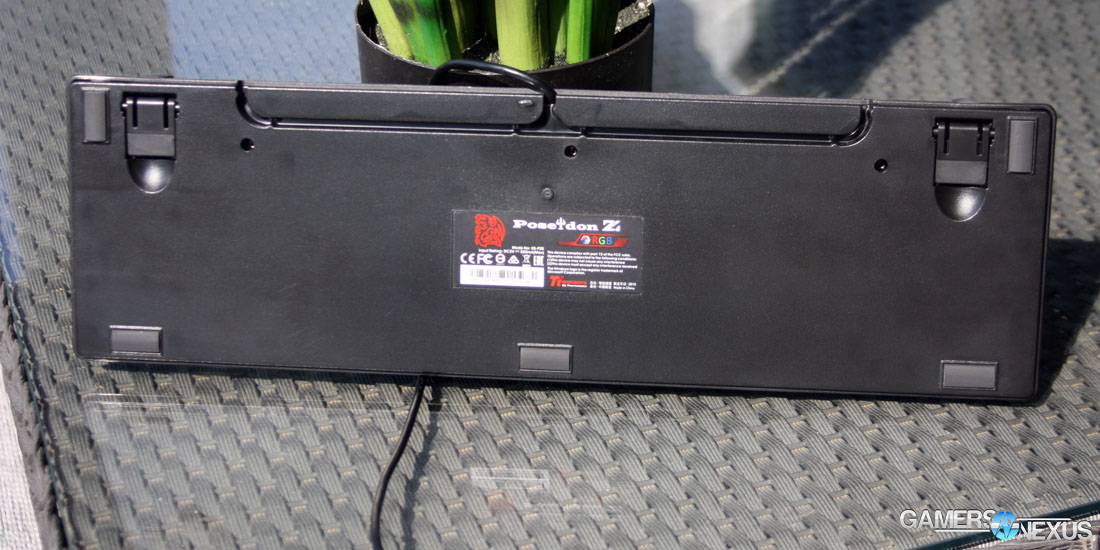 Above: Cable routing channels in the back-side of the keyboard would be better utilized with the cable located non-centrally.

The Thermaltake Poseidon Z RGB uses an NXP LKPC11U35F controller along with three MB15042GP B1P141CFHB lighting controllers, presumably one for red, blue, and green. There were a few oddities, like the backplate’s soldering -- some mounts were soldered on, some weren’t -- and the space bar switch, which is sideways, but nothing we’d call “bad.” Just oddities.

The internal build quality varied. Thermaltake uses a metal backplate and nothing was what I would consider bad or poor design, some parts were a little disappointing. Some solder joints were subpar -- there were spots that appeared to have solder flux on them -- and the stems of some switches appeared to have been slightly melted by heat. None of these issues are widespread or bad enough to warrant concern, but they aren’t encouraging, and are areas that Thermaltake can improve upon. Thermaltake’s five-year warranty does diminish any worries about the build quality of the Poseidon RGB since it Thermaltake stands by their product.

This, actually, is one of Tt eSports’ biggest points of advantage over the competition. The company’s five-year warranty, coupled with a switch durability rating exceeding 40-50 million clicks, means that any issues can be resolved within a very generous window of purchase. By the five-year point, we’ve all gotten our hundred dollars’ worth out of a peripheral -- if it happens to break at that point, it’s tough to complain about a replacement. We’re big fans of Thermaltake’s warranty and support backing the product. 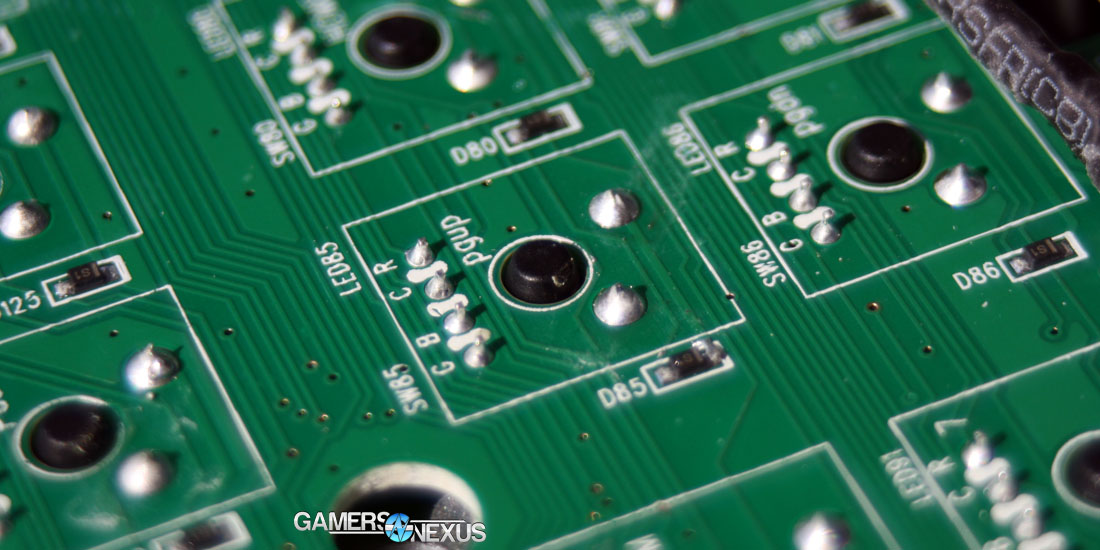 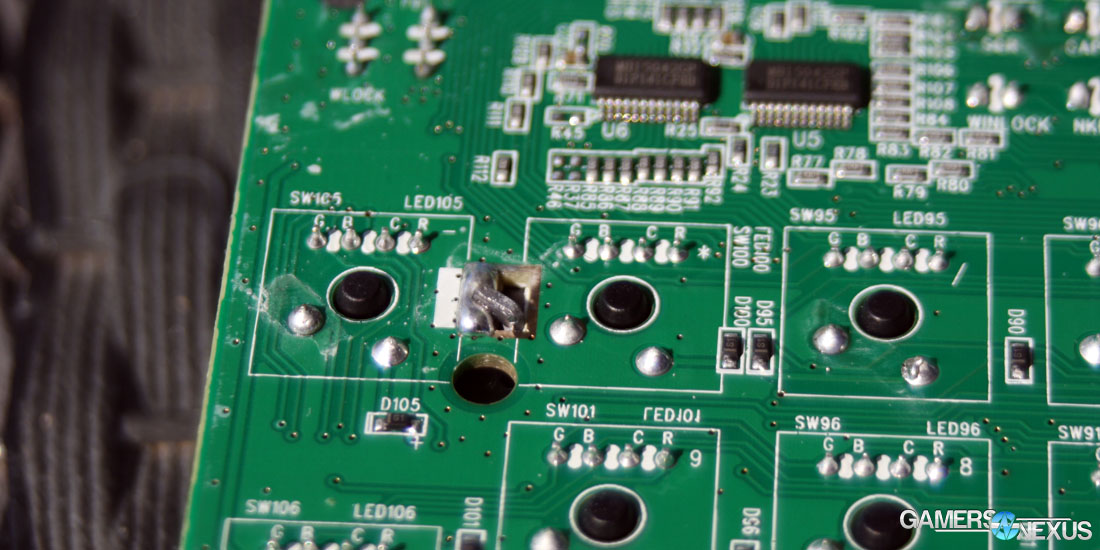 Above: Left-over flux. Flux is just flux, but could be cleaner.

Ultimately, the Thermaltake Poseidon Z RGB is a compromise. It provides 16.8 million colors of programmable RGB illumination, but does so with some downsides. Minor internal build quality issues, a non-braided cable, and frustrating software -- although the software can be fixed -- comprise most of these issues. That said, the keyboard is $100. That’s very affordable for an RGB, mechanical keyboard, and we already publicly shared our satisfaction with the original Poseidon Z’s quality of typing and relative simplicity (compared to more bulked-up options). 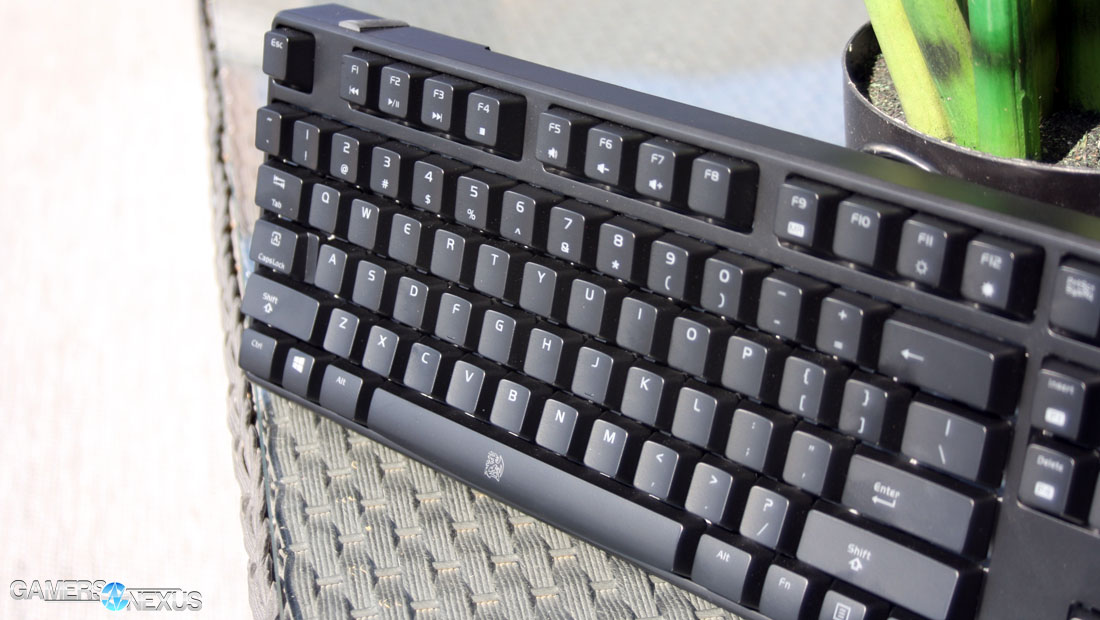 For those unwilling to accept these downsides for a cheaper RGB keyboard, the next cheapest options with 16.8 million color RGB functionality are the Logitech G910 at $140, G410 at $130, and Rosewill RGB80 at $105 (although it doesn’t yet support 16.8 million colors, it is supposed to gain this in a future update which, after Corsair’s fiasco, I would be hesitant to bank on).

With programmable RGB lighting, mechanical switches, usable (although frustrating) software, a five-year warranty and, compared to other RGB keyboards, a relatively low price of $100 on Newegg and Amazon, the Thermaltake Poseidon Z RGB has a unique market position and is a good choice for those desiring programmable RGB on a budget. We would encourage keyboard enthusiasts of the “truest form” to consider alternatives, but we feel confident in recommending this keyboard to most gamers with RGB and mechanical demands.