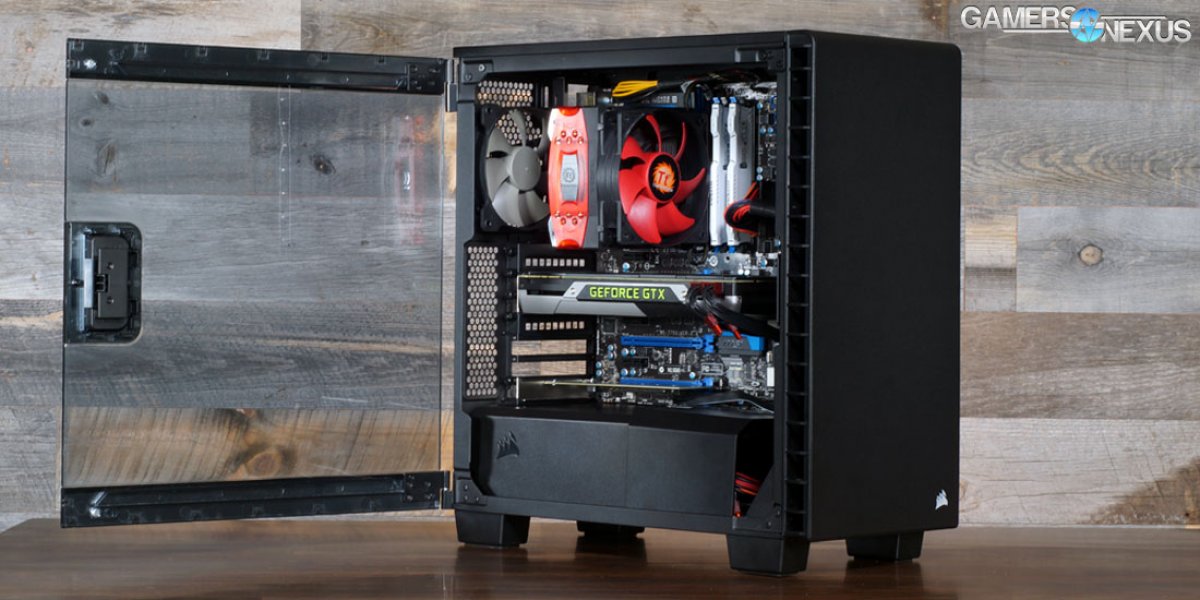 Our approach to methodology is underscored by one point: If we can’t do it consistently and confidently, we don’t do it at all. For noise, we aren’t yet confident in a reliable methodology given our setup, so we don’t test noise. Subjectively, the 400C is fairly noisy at the higher fan speeds, but is perceptibly the same as the staple S340 enclosure. A “Q” model of the Carbide 400 exists (400Q), which eliminates the side window in favor of additional foam padding for noise control.

We're starting strictly with the Carbide 400C's data, then will move into comparative analysis versus other enclosures. For 400C testing, as we did with the Manta, we tested most possible / realistic fan placement configurations within the case. This includes these setups:

The above charts show thermals over time (TOT) for CPU and GPU temperatures. It's not quite as easy to read as the equilibrium charts – immediately below – but gives an idea for ramp-up and cool-down time of the cases. The CPU chart is zoomed-in a bit more to help differentiate the data, so our Y-axis limit is only 50C in this instance (just a note, for those who might be confused by the change of scale).

There's not a massive difference between any of these results except for in a few key places – we'll talk about that in the next chart section. 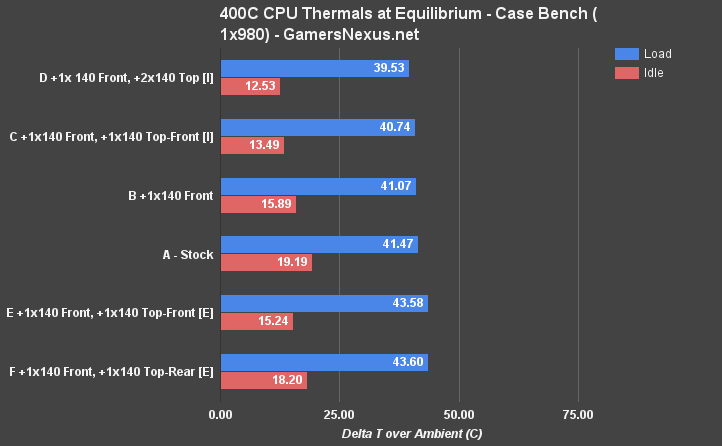 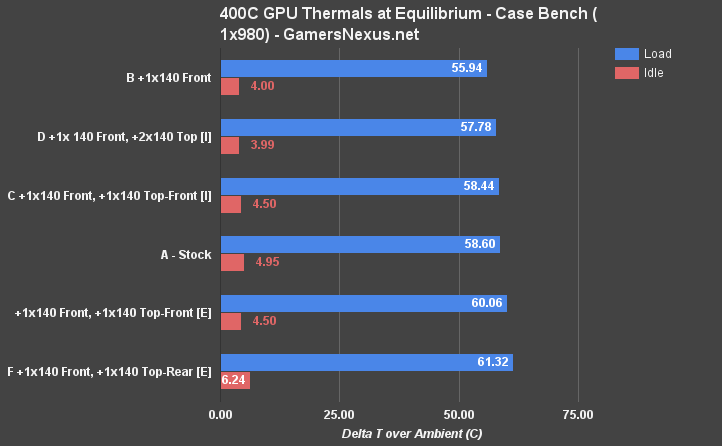 The equilibrium chart above paints a clearer picture as to performance.

Configuring everything as intake, unsurprisingly and in-line with previous case tests, benefits the CPU markedly. Top intake is obstructed in this case, but it still performs significantly better than top exhaust (for tower-cooled CPU thermals). Our range for these results is just 4.07C (43.6C to 39.53C), so all-in-all a fairly inconsequential performance impact – but the world of cooling is often a fight for single-degree gains. The stock configuration performs only marginally worse than mounting an additional 140mm fan in the front (aligned with the GPU – so that makes sense), and optimal CPU cooling scenarios all center around intake-heavy setups (with 1x rear fan still mounted). Top exhaust setups actually end up siphoning fresh, cool intake from the CPU before the air ever hits the tower cooler, effectively suffocating the CPU for a constant flow of cool air.

Not a major difference overall, but we'd suggest opting-out of top exhaust for tower cooler scenarios. It makes more sense to take your extra fan and put it somewhere else – like front intake or, maybe, top intake. Let's look at GPU thermals before making conclusions, though.

Despite its insignificance for CPU thermals, adding the lower-mounted 1x 140mm fan (intake) noticeably improved GPU cooling performance within the 400C, a delta of 2.66C (4.64% difference). This is the best possible configuration for raw GPU thermals (note: ours uses a blower fan), and the one we'd probably recommend as a go-to. Interestingly, dumping more cool air into the system (from upstairs) doesn't further improve GPU thermals; there's an improvement over stock, but GPU temps actually increase from the +1x 140mm front / 0x top configuration. This is because the top intake fans assist in dissipating heat from the tower cooler, but as a result, push that heat down and into the back of the GPU. As with the Manta tests, there's a trade-off to be made between GPU and CPU performance.

Top exhaust fans again damage cooling potential. This is in part because we used fairly powerful Corsair 140mm fans (the same as used in the 600C), which then go on to 'steal' air from the core components before the air can reach the heatsinks.

If you're adding one fan, we think it makes the most sense to place that fan in the front-bottom slot. CPU cooling is about the same, but GPU cooling sees a couple degrees improvement and has no perceptible downside. 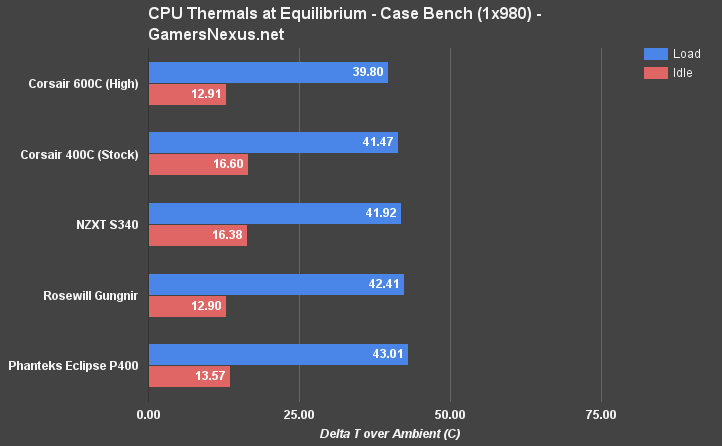 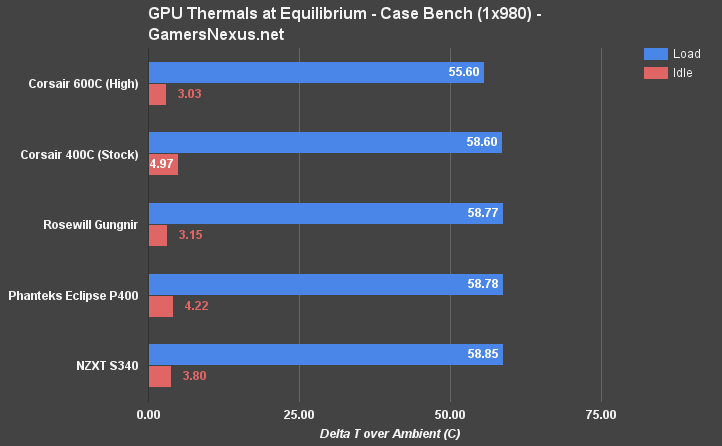 Our comparative testing mostly lines-up similarly classed cases: Mid-towers with PSU shrouds, a couple fans, primarily solid paneling (read: minimal intake meshing), and priced under $100. The 600C is the only case that doesn't necessarily fit here – it's a bit more expensive at $150 – but has been included for familial comparisons.

The 600C leads thermal performance. Its rotated board layout leverages the PSU's fan as a means to draft air up and toward the GPU, which assists the blower fan's ability to dissipate thermals. That keeps the 600C markedly ahead of all the other cases on the GPU bench (delta vs. 400C: 5.25%; range for entire chart: 3.25C). None of these differences are big enough to impact the daily life of a user, particularly once we ignore the 600C and look only at the similarly-priced and specified products.

The 400C operates at 58.60C load for the GPU (dT over ambient), though runs a hotter idle temperature at 4.97C; its competition sits in the 3.15 to 4.22C range. Again, effectively inconsequential for most users. We attribute this to the positioning of the stock intake fan on the 400C.

For CPU thermals, we again see higher idle temperatures than some competitors (S340 runs a bit warm – a trend for NZXT's recent and steel-heavy cases), but load temperatures are fully acceptable at 41.47C; in fact, CPU load thermals for the 400C plant it firmly above its same-priced competition, beaten out in this chart only by Corsair's own 600C. The chart range is 3.21C (load), with a 400C vs. S340 load delta of just 1.08% (imperceptible). Against the Phanteks Eclipse P400, there is a more noticeable gain at 3.65% – though still small.

Just to show the data a different way. 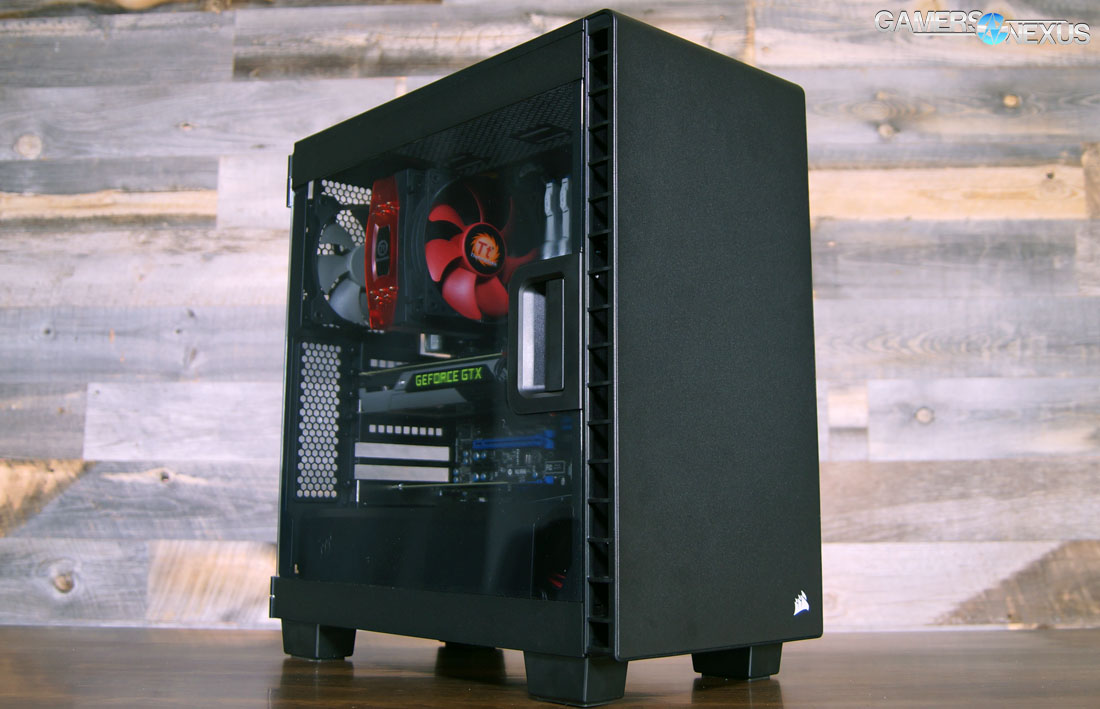 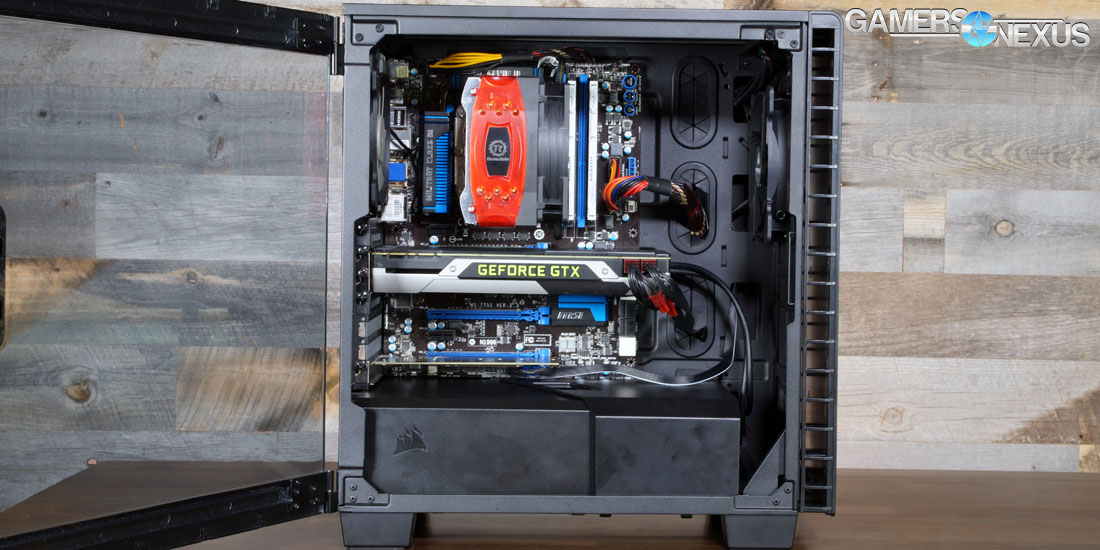 Corsair continues its focus on high-performance enclosures with the 400C. Even with the move to solid paneling and relying almost entirely on side- and bottom-vented intake, the 400C outperforms similarly classed, directly competing enclosures. The fans contribute most directly to this, but tooling large gaps in the sides of the front panel ensure greater access to cool air. On this limited-run bench, the Corsair Carbide 400C is second only to the 600C – a larger version of the case – and outmatches NZXT's S340, Phanteks' brand new Eclipse P400, and Rosewill's Gungnir (another new case of the same type).

We had some trouble with power supply installation on the Corsair 400C. For 180mm long PSUs, note that you may have to remove (or intensely battle) the 2x 3.5” HDD bay cages. Unfortunately, this is the only point of installation for 3.5” HDDs, so its removal relegates the system to saturation of the 3x 2.5” SSD sleds on the rear side of the board. If you're building an entirely new system and have already decided on the 400C, we'd recommend a PSU smaller than 180mm in length.

The front panel of the 400C is also difficult to remove. The use of clips (one of which has already broken) does limit the installation/removal cycle more than, say, what NZXT uses on its Manta. This complaint is ultimately minor – how often does the average user really remove the front panel? – but one that's worth mention as a point of improvement.

Corsair does do well with other aspects of ease-of-installation, however. Screws are packaged individually and clearly marked, the 2.5” SSD sleds are easily accessed and well designed, the PSU shroud looks good once in-place, and build quality is overall rigid and strong.

Like all products, the 400C has several points of improvement – but they're mostly small items and mostly pertain to convenience (aside from the HDD cage's restrictions on modular 180mm PSUs). This is a good thing for Corsair; we can overlook installation inconveniences when considering that most users will only build a system once. In terms of cooling, the 400C is undeniably the best of its class on the bench. It marginally outperforms the S340, P400, and Gungnir. Most users won't see the difference, but for folks who devoutly seek every (tenth of a) degree of difference, the 400C is the clear winner. We mostly leave aesthetics to the readers – the photos tell that story – but the case is overall unoffensive and somewhat discreet. We'll let you figure out if you like it more than the competition.

Build quality is high, cooling performance is superior, and the price (~$90 right now) is about what we'd expect.