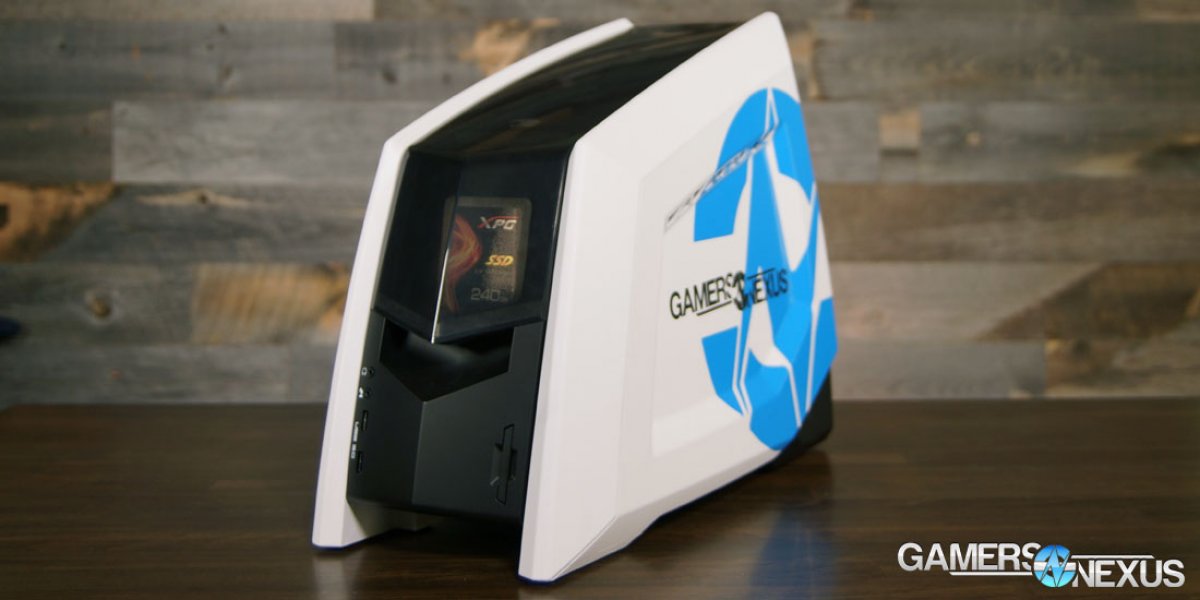 As with most SIs, the Revolt 2 is customizable by the customer prior to checkout. This BTO (built to order) approach does make reviews tricky, as your mileage may vary, but there are three primary SKUs of the Revolt 2. We were specifically loaned the high-end SKU for test purposes. Table below.

System Integrators all have the same point of weakness, and it's low-end builds. The high-end SKUs tend to be well-balanced and, in the case of the Revolt 2, are priced fairly evenly with the DIY route; at the low-end, these companies always seem to struggle with parts selection.

There's a few factors at play here – they're somewhat behind-the-scenes and don't make it as easy to run a part-to-part comparison with SIs. These custom PC vendors often work with manufacturers for MDFs (marketing development fund) and discounted hardware for moving high volumes of parts. On rare occasions, SIs are actually able to build and sell systems cheaper than is possible to do (identical part-for-part) via DIY. That's because of their access to components. It's also why SIs will sometimes use parts that cause a bit of head-scratching: Maybe they've got a warehouse full of 800W PSUs, so it may make the most sense (and be cheaper or encourage more MDFs) for them to ship more 800W PSUs even in systems that don't require them. The same is true for any other part.

That explained, the point of questioning I had for the standard Revolt 2 is primarily the lack of hard drive. IBP is trying to come in at a clean $900 and, given the nature of the case, they're trying to deploy an SSD to showcase the faceplate. They're also advertising it as a gaming system, though, and a 120GB SSD just isn't going to cut it for anyone. Maybe someone living off of Steam streaming can get by, but that's a small audience. It'd be a shame to drop the SSD for an HDD – again, because of the showroom nature of the case – but it would make more sense. iBUYPOWER allows a 1TB HDD to be added for $60 (a fair price) on the configuration page – we just strongly believe it should be a default component. If you're buying the Revolt 2 “standard,” just know that it's only got 120GB of storage stock, then throw on a hard drive. 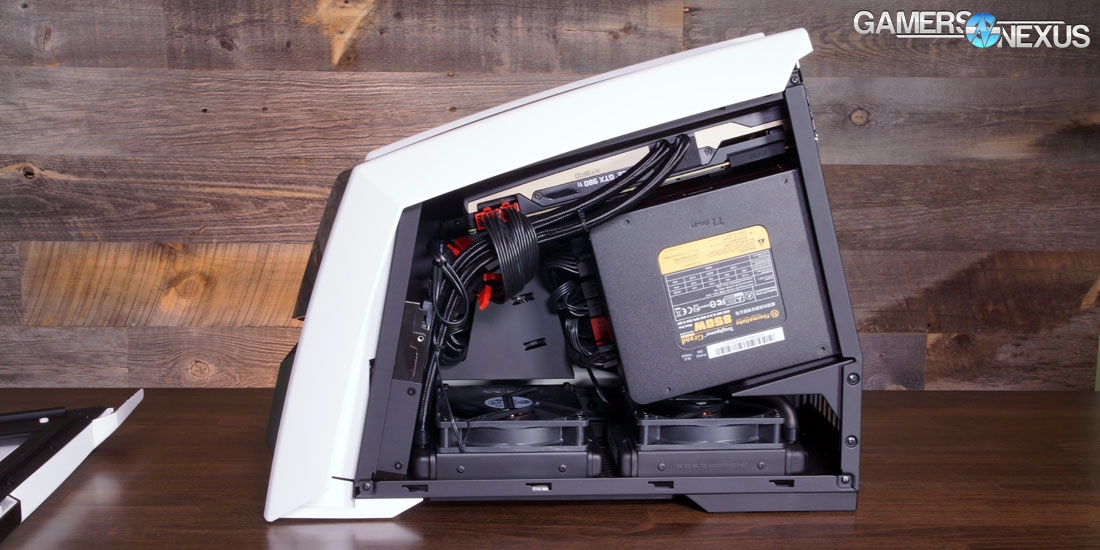 Now, if you were to properly DIY a build like this, you'd probably drop the motherboard SKU and allocated some funding toward an upgraded GPU (like a GTX 960 or R9 380X). Even though the difference between the part-for-part builds is just $47 after Windows, that's enough of a gap where a GTX 960 would be within range. This is why the low-end SKUs generally reflect poorer value from all SIs, since smaller amounts of money can be used to make bigger upgrades.

A ~$147 delta between DIY and prebuilt systems is a good deal. That's cheap, really, considering that Windows is pre-installed (there's $100, assuming no MSDN/school access), the custom case, and the fact that someone's building it for you. That's not to say we couldn't do it cheaper with different parts selection, but that exits apples-to-apples comparisons. iBUYPOWER retains a fair pricing structure for the components offered.

At the high-end, iBUYPOWER's value is significant and the case is most at home, able to showoff flashier, higher-end parts.

Here's an important point to bring up: For a rig with a GTX 970 and Core i7 CPU, the original power supply listing was “350W (Free Upgrade to 700W).” The company was shipping 700W PSUs with the build – more than ample – but did list the 350W as an assumed baseline when no 'free upgrade' is active, should a time ever exist. We talked to iBUYPOWER about this and urged that 350W is cutting it very close (our testing of comparable configurations landed us at ~290-300W draw – a little uncomfortable). We assumed that iBUYPOWER was trying to add perceived value (a standard sales technique, and one for which we don't criticize the company) and never intended to ship the low-end unit, but still wanted to talk about it. Immediately following our explanation of concerns, the IBP team updated the website to “400W (Free Upgrade to 800W)”.

That's fine. 400W is totally acceptable for the configuration, assuming it ever even ships with such a PSU. The responsiveness from iBUYPOWER's team is encouraging, and the level-headed reception to criticism shows a willingness to listen. That's the kind of support you want from a PC building company, seeing as one of the primary use cases is a buyer who doesn't know how to DIY (and would rather have it done for them). Not every manufacturer or SI is so open to criticism.

Another point that we liked: iBUYPOWER does not allow configuration of the Revolt 2 with air coolers – even low-profile ones. Given the thermal concerns, an air cooled CPU would likely suffocate for air and would be battled against by the PSU (fan facing the CPU block). An air cooler would be buried between the PSU, RAM, and video card, and LP coolers are always push fans – so they need room over-head to breathe. Forcing a CLC (the Asetek 550LC is more-or-less the same as the 'upgrade' Corsair H55) means we side-step thermal throttling on the CPU front. 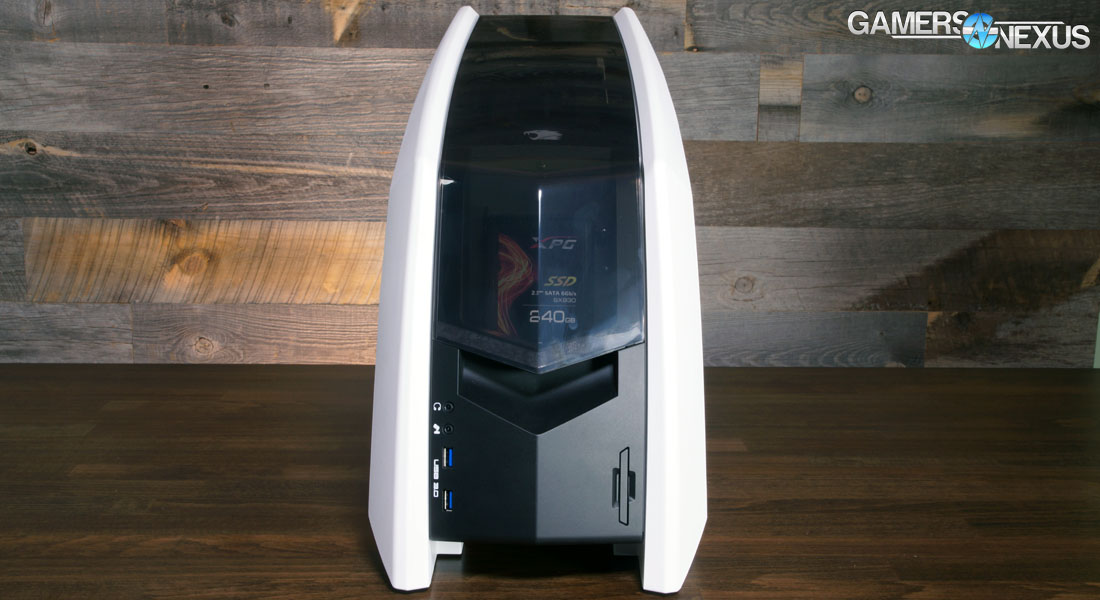 The Revolt 2 has been a unique, fun case to work with. It's thermally intriguing and presents test engineering challenges (all engaged below). The underlying chassis is also custom and not provided by an OEM (SIs will often hire, for example, Azza to make a temporarily exclusive chassis), making for more unique testing and use scenarios. Its aesthetics decisions are also in-line with industry trends to show-off the GPU faceplate, as Corsair has recently decided to pursue (and as NZXT does for SSDs).

We'll leave the discussion of exterior appearances to the video; it's up to you whether the case looks good, not us. What we will discuss, though, is the design and walkthrough of the case. 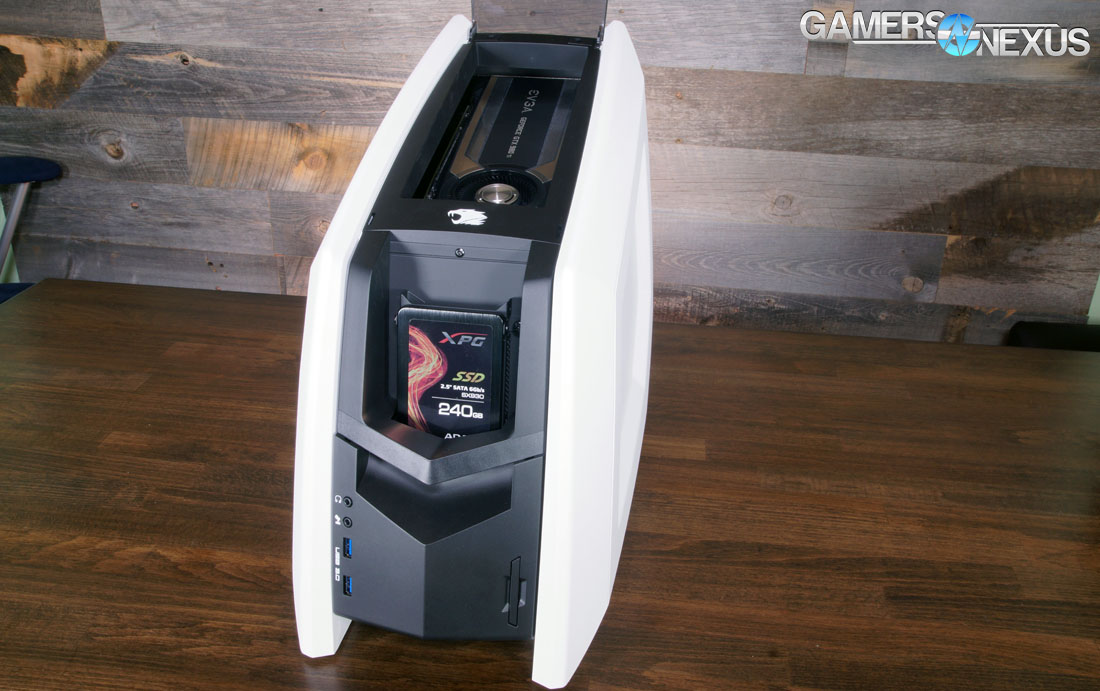 Top-center is the exposed GPU faceplate, which is illuminated by a set of iBUYPOWER's “Smart Lighting” (RGB LEDs with software control, similar to the HUE+). The lights also spotlight the front-center SSD area, where 2x 2.5” devices can be hot-swapped under the acrylic 'hood' of the case.

Internal components are accessed by removing the right side panel – the motherboard's inverted, orienting the PCI-e slot toward the top of the case. This orientation allows the GPU's faceplate to show through the window, and does so without requiring a PCI-e ribbon cable. The PSU is the only real visible component when removing the panel, as it hovers over the motherboard and has a hard drive on its left flank. The PSU fan is pointed toward the CPU block, aiding in the extraction of heat from the PCH and memory.

The frame is rigid and of high build quality. Side paneling is comprised of heavy plastics, which either looks great or looks cheap, depending on who you are.

We tested using the iBUYPOWER Revolt 2 PC as provided by the company.

The latest NVIDIA drivers (361.75) were used for testing. Game settings were manually controlled for the DUT. All games were run at presets defined in their respective charts. We disable brand-supported technologies in games, like The Witcher 3's HairWorks and HBAO. All other game settings are defined in respective game benchmarks, which we publish separately from GPU and system reviews. Our test courses, in the event manual testing is executed, are also uploaded within that content. This allows others to replicate our results by studying our bench courses.

Thermals are measured using AIDA64. We execute an in-house automated script to ensure identical start and end times for the test. The video card is configured to run at 55% fan speed at all times. Stock clocks are used.

Continue to the second (and final) page for gaming benchmarks & thermals!