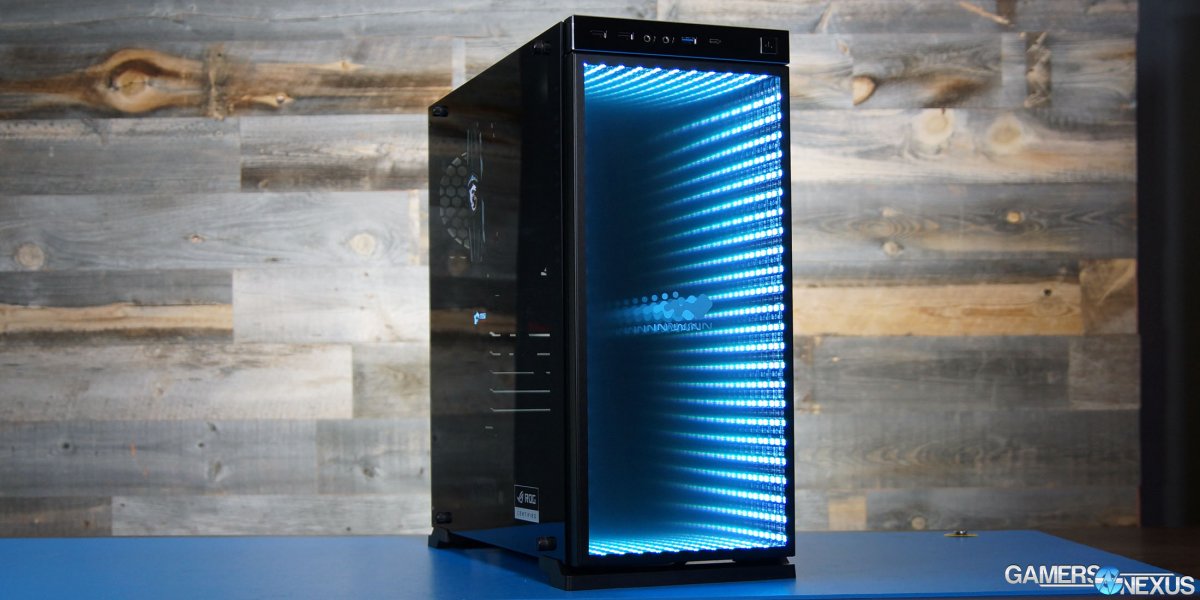 With that $250, you get the same case with LEDs, but with restricted fan support. The mesh front intake is replaced with a solid panel housing the RGB LED strip. The strip uses adhesive to stick around the inner wall of the half-inch thick shell, and is flanked on either side by mirrored surfaces. There is no possibility for front intake, as this infinity effect requires the entire front panel.

In Win 805i Cable Management 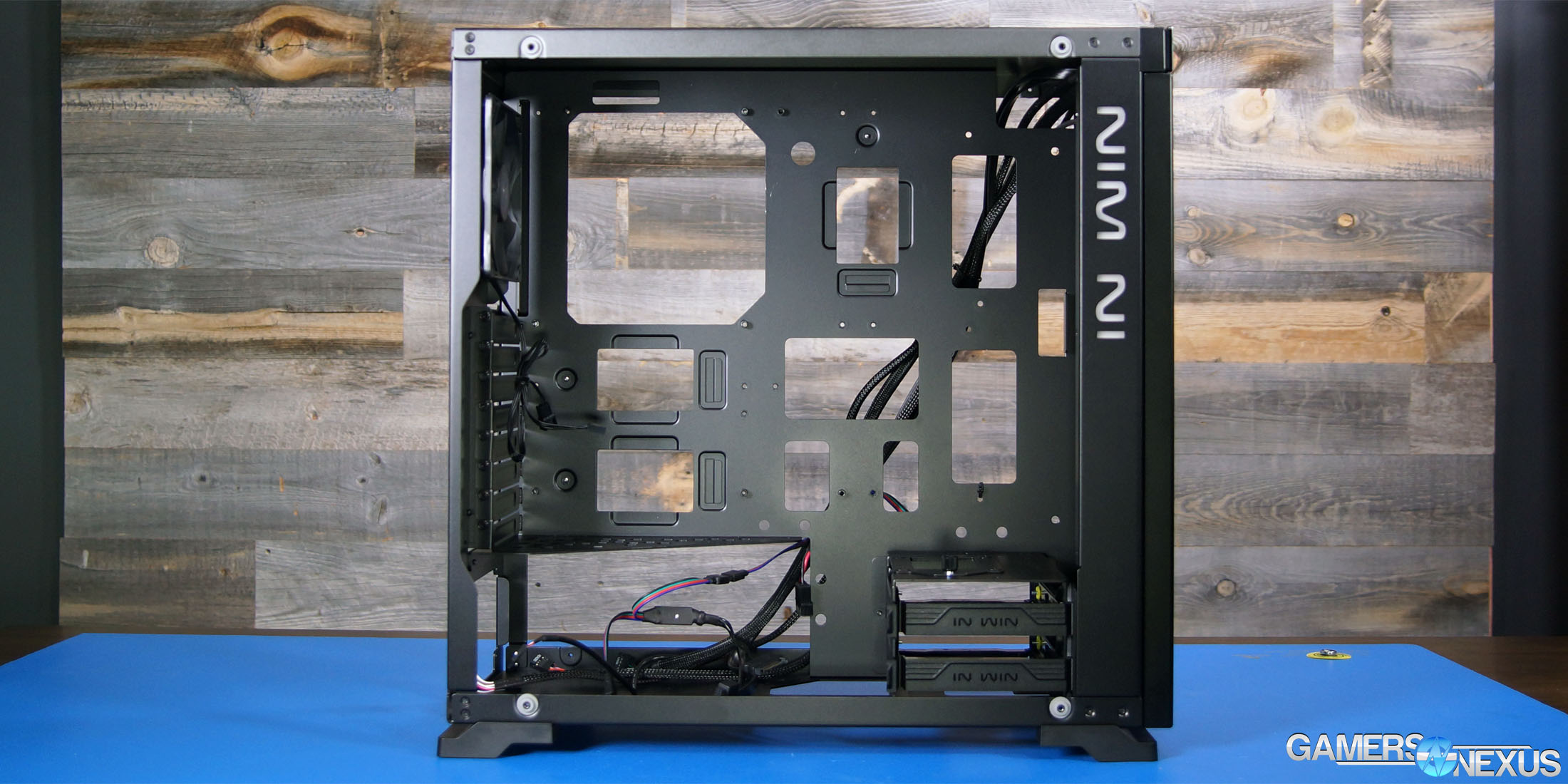 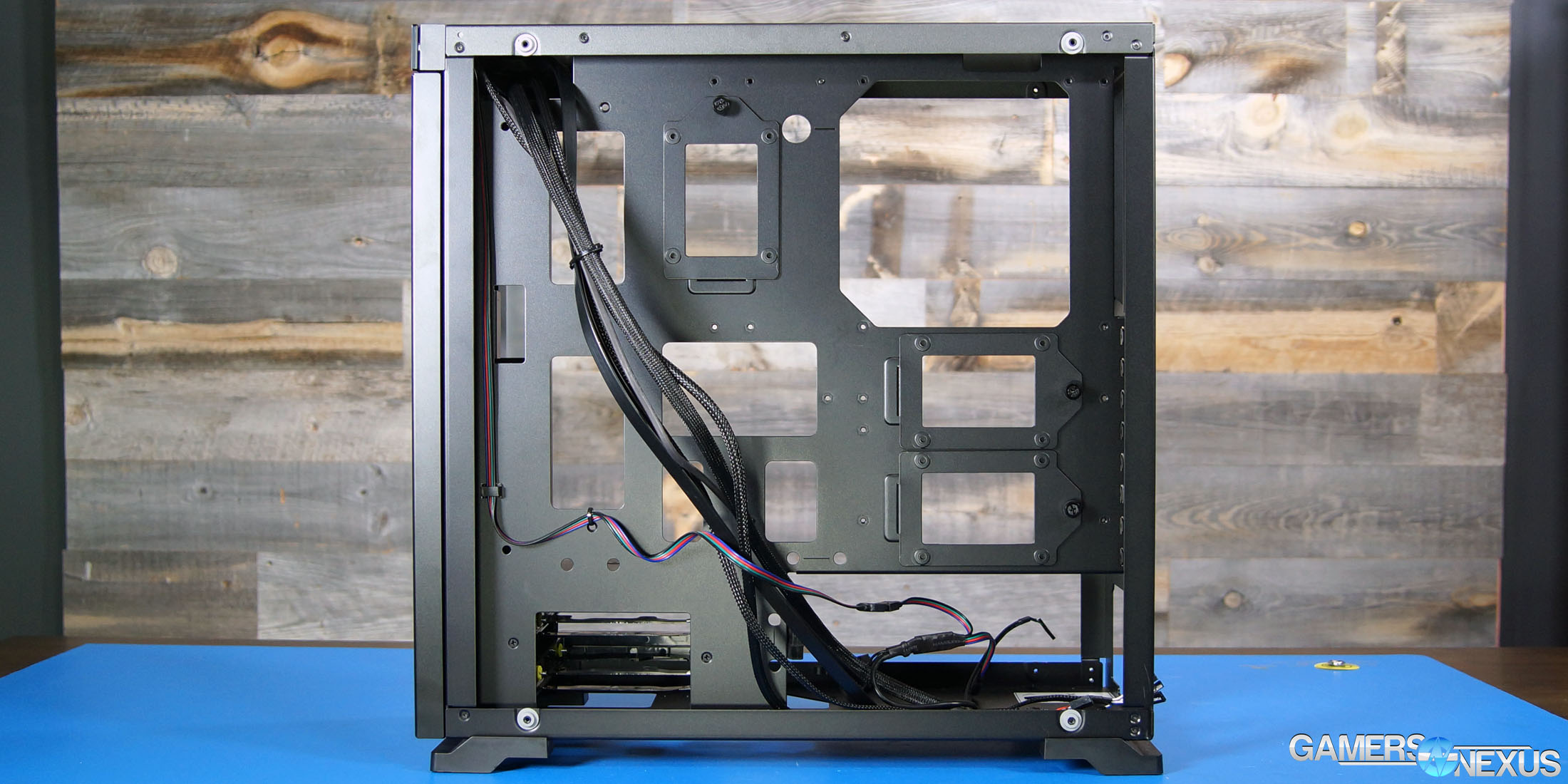 Its cables route internally and connect to an LED hub, which In Win dubs the “Halo” module, and that hub splits into SATA power, USB2.0 for control, and another LED cable for optional strips.

And this leads us to the cabling internally. First off, In Win provides this additional RGB LED strip with their enclosure, but doesn’t do much to help you out with it. The cable can be split off from the Halo controller, but because it’s 67 inches long – just over 5 feet – it’s sort of difficult to hide the excess wiring. It’s also impossible to mount to the case without looking awful, since you’re basically forced to run the thing along the perimeter of the inside, thereby routing it directly over the singular fan in the case.

Besides, once the user is more or less forced to install the LED strip in a single location, it does sort of make us wonder why In Win didn’t just pre-apply the strip. Adhesive is obnoxious to work with, especially at that length.

Cabling is problematic for many reasons. The cable management pass-throughs alone are poorly thought-out, often too large for their own good. The only reason you want a large cut-out is to fit big bundles of cables through the case wall. There is one place this happens: Near the PSU, because that’s where the cables originate. Maybe you run two total, but more than that is excessive, and begins to eat into the case’s ability to hide cables behind the wall. 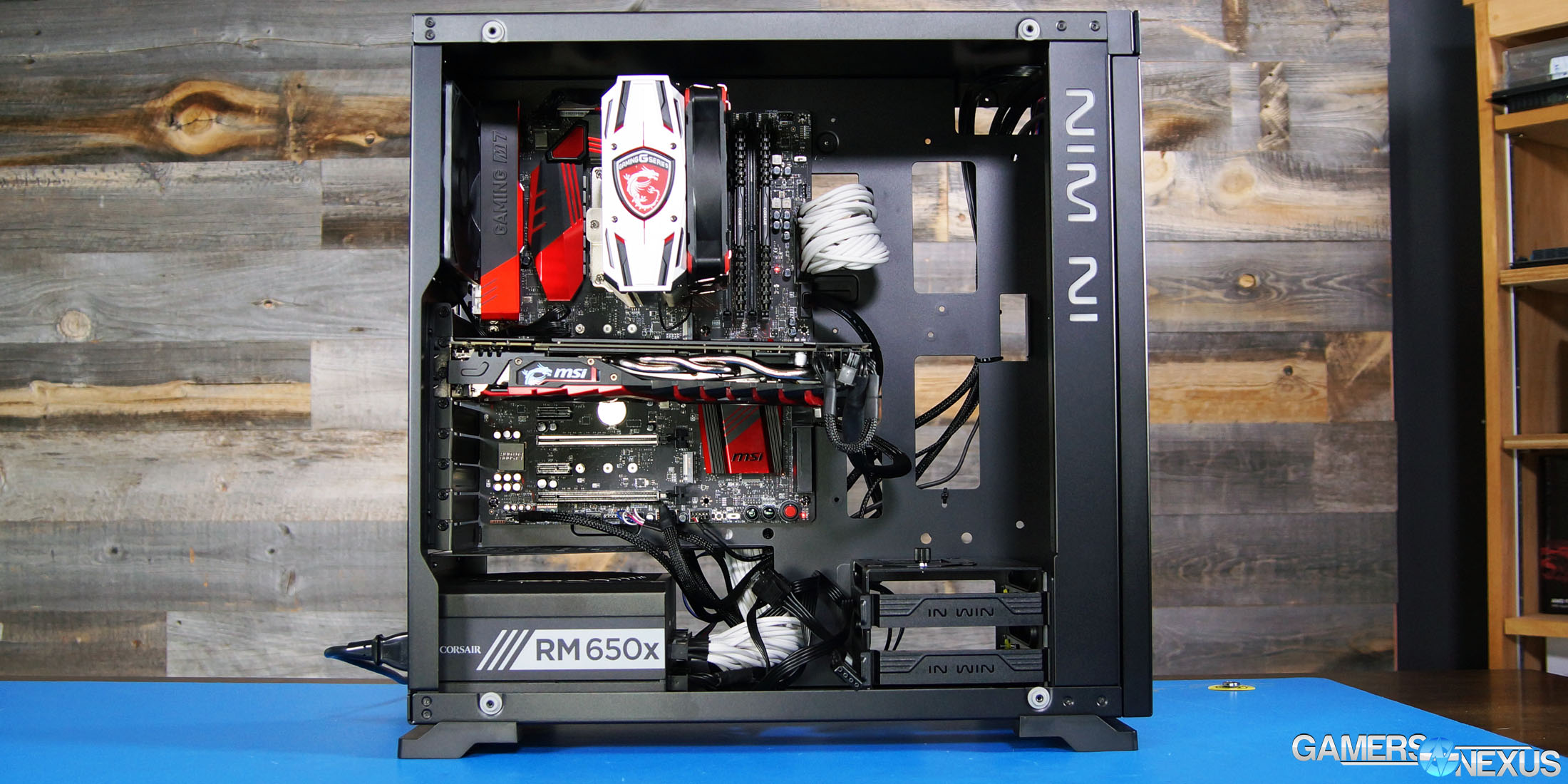 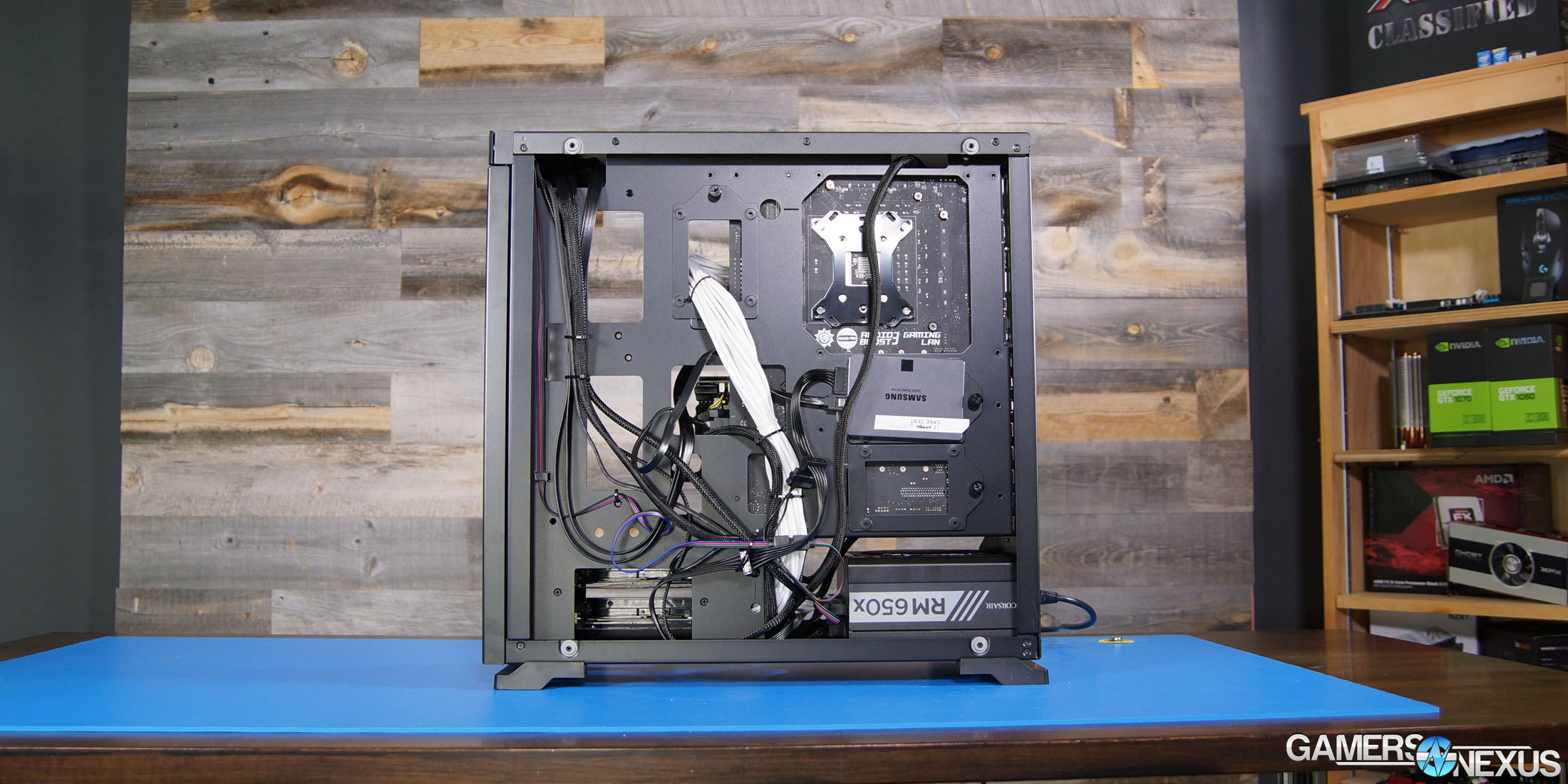 In Win does go through the effort of providing cable clamps – something we’ve come to admire, this year – but again doesn’t bother to pre-apply them. Just like the LED strip, this almost seems misguided; the clamps can really only go in a few places, as the cut-outs restrict cabling to just two primary channels.

It’s difficult to hide cables in this case, and because In Win has decided to opt for glass paneling on either side, including the cabled side, that just leaves us scratching our heads. This is particularly confusing, because the 805 Infinity is yet another case in a line of tempered glass enclosures that uses the paneling on both sides. That exposes the undoubtedly poorly managed cables to the right-side, eliminating the entire point of the glass. If exposing a panel with glass, it’d better look good.

This isn’t aided by the fact that the In Win 805 forgoes the trendy PSU shroud in favor of an artsy, but clearly structural power supply half-cover-thing. This forces us to pool any unused cables all at the bottom of the case, alongside whatever slack from the SATA and MOLEX cables there may be. The bottom, coincidentally, is also our only source of outside air.

And that’s not being hyperbolic, either. The top panel is walled shut, the front panel is clearly pre-occupied, there’s glass on either side panel, and there’s a single 120mm exhaust fan near the CPU socket. In Win has even decided to use completely flat expansion covers, limiting breathing near the GPU or SSDs.

This leaves us with one option for intake: The bottom. Although In Win says 2x 120mm fans can fit down there, the reality is that, at best, you’re only going to fit one. The first slot will be consumed by the PSU cabling for anything of normal size, like our Corsair RM650x, and the second slot is covered by the hard drive bays by default. You could relocate these cages to the radiator mount at the front of the case, if you pleased, but then you’d have no radiator.

Then again, losing that slot is irrelevant, because putting a radiator there is a bad idea. It can’t breathe. There’s about a 1-inch hole in the bottom front where the air could be pulled in, but that’s about it. The bottom half of the radiator will be adequately cooled, perhaps, but distribution of the air is not going to be even. In Win is even blocking the radiator with their artfully cut-out radiator fan holes, apparently not privy to the fact that the radiator sheds heat in more ways than direct airflow.

Keep in mind also that using this enclosure on carpet means you’re further limiting intake, and exposing yourself to dust accumulation in the future. 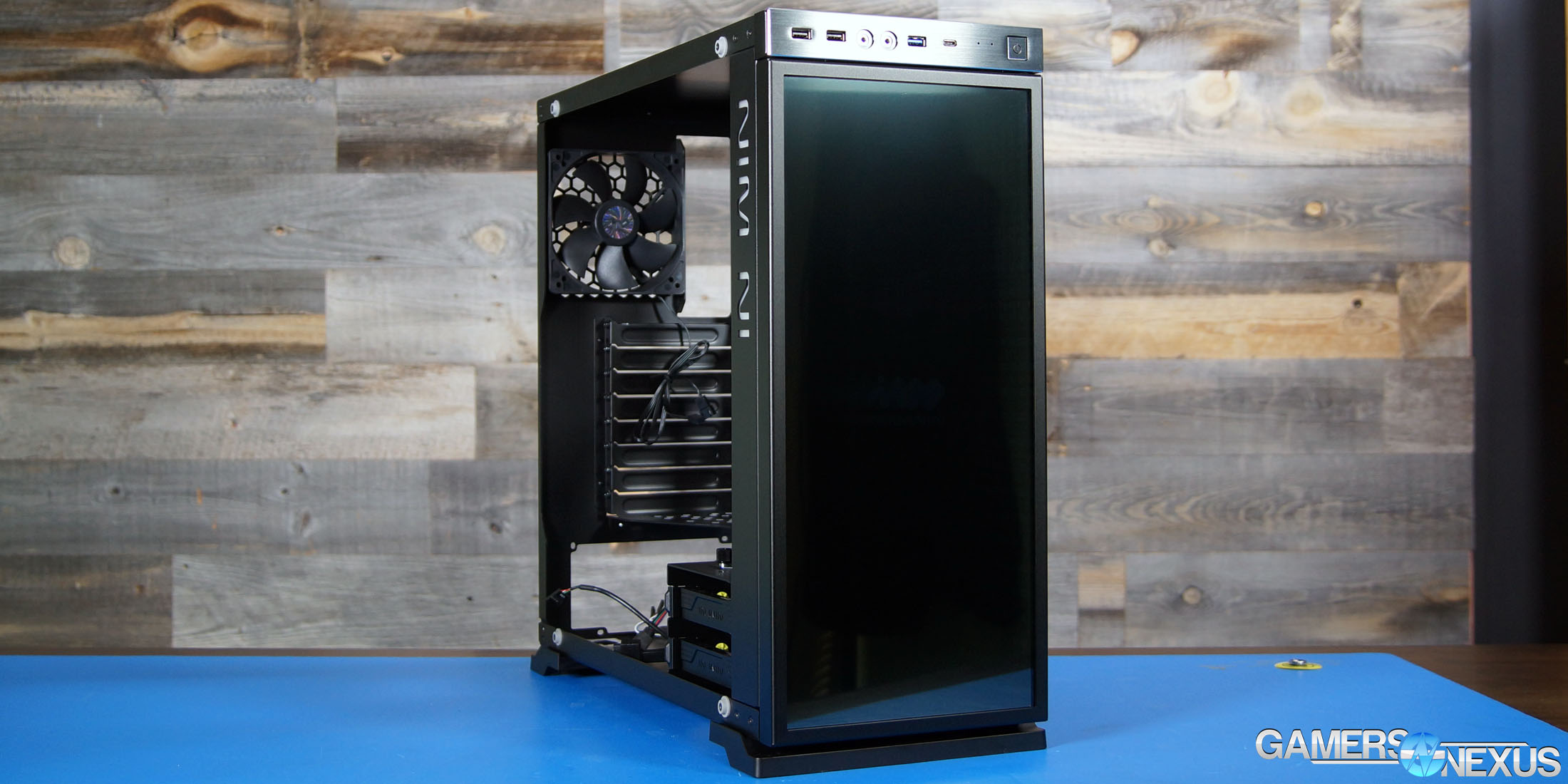 As for the power supply fan, that’s not facing down – that’s internal, and is leveraged as part of the exhaust system for the computer. If you were planning to buy a power supply that can passively cool itself, forget it – this case won’t allow that, and the thing will be spinning all the time. And do not put a passively cooled PSU with no fan in here, either. Something like the DigiFanless will run hot as it soaks heat from the internal case ambient.

Let’s pause on the criticisms and demonstrate the issue with thermals, just for a moment.

All case fans are manually configured to their maximum throughput using BIOS, then we configure to an RPM closer to 1050 (where supported) for a universal "quiet" testing. If a fan controller is present, we opt-in and test on multiple settings. This forces testing of case fan performance in addition to the case's air channeling and airstream design. This also ensures minimal variance when testing, as automatically controlled fan speeds can reduce reliability of benchmarking. The CPU fan is set to 1100RPM (constant) for consistency, and the CPU is overclocked to 4.4GHz with a vCore of 1.272V (constant). C-States and power saving states are disabled.

Continue to Page 2 for the In Win 805i temperature & noise benchmarks.