There are a lot of different ways to do CPU tests when considering gaming performance. Rather than isolate strictly games which are known to be fully CPU-limited, we mixed those in with a few mixed workload or GPU-intensive games to clarify the limitation to gains when bound by other devices.

The idea is that CPU-bound games will, as one would expect, better demonstrate CPU performance scaling across generations. That’s the best way to create a stack-up of performance without concern of other limitations, and so we’ve adopted a few titles (like Ashes) to help in this aspect of testing. As most games are more mixed workload, though, we’ve included some modern titles (like Watch Dogs 2 and Battlefield 1) to create a more realistic idea of what to expect as a user. We’re also sticking to 1080p resolutions, as this provides a good mix of realism and minimal GPU load (with a GTX 1080 FTW). Increasing resolution will rapidly close any CPU gaps we’re seeing as pixel throughput bottlenecks become an issue for the GPU.

Note also that we’re sticking to i7 CPUs for now. That was enough work for this content piece, considering we’re already on flights to CES. We’ll be visiting i5, i3, FX, and Zen CPUs as we continue benching the new generations from Intel and AMD.

For the full testing methodology, check page 3 of this article. 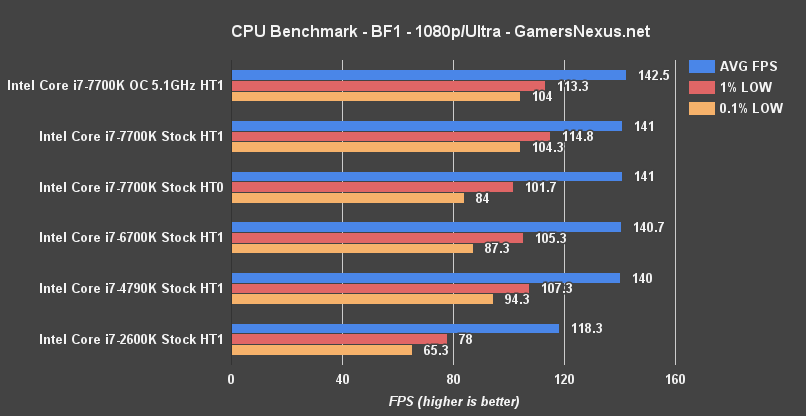 Battlefield 1 has received several patches since our initial Battlefield 1 CPU benchmark, and we’re also using new components for this benchmark.

Using DirectX 11, as Dx 12 has proven problematic with Battlefield 1, we’re testing our suite of i7 CPUs with 1080p/Ultra settings and a 96-degree horizontal FOV.

With these settings, we’re seeing the i7-7700K Kaby Lake CPU operate at 141FPS AVG stock with the GTX 1080 FTW, followed by 115FPS 1% lows and 104FPS 0.1% lows. The CPU allows for consistent frametimes at the low-end while enabling the 1080 FTW to operate effectively to its full potential.

Disabling hyperthreading keeps our average the same, but brings the frametimes down measurably. The 1% lows are now 102FPS, with 0.1% lows now 84FPS.

The 6700K pushes 140.7FPS – effectively the same – with lows at 105FPS and 87FPS. No perceptible difference here. Measurable, sure. But that only gets us so far. More CPU-bound games will help illustrate the differences further.

To compare to a popular CPU from two generations ago, the i7-4790K operates at around 140FPS AVG, 107FPS 1% lows, and 94FPS 0.1% lows. The marginally improved frametimes are a result of higher turbo clocks. We also saw this in our initial 6700K review. 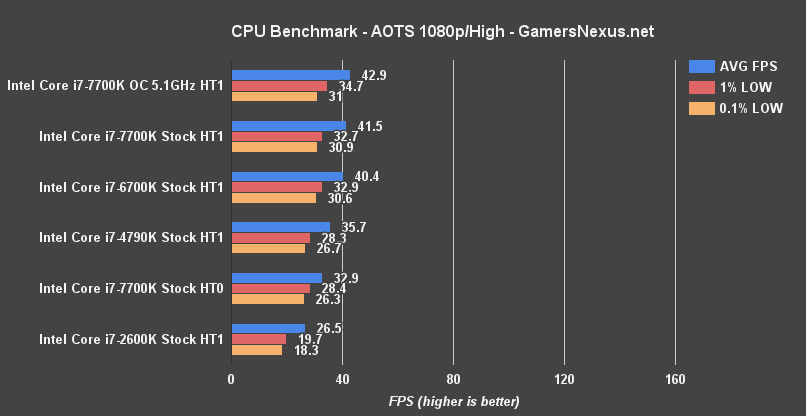 Ashes of the Singularity has a built-in CPU benchmark when operating DirectX 12, and provides more of a CPU-centric look at performance. With 1080p, “high” settings, and full resolution textures, we’re seeing a performance throughput of 41.5FPS AVG, 33FPS 1% lows, and 31FPS 0.1% lows. Disabling hyperthreading brings us down nearly 10FPS in averages.

Overclocked, we don’t get much additional performance – certainly not a noticeable amount. The 6700K at stock settings operates about 1FPS slower than the 7700K – about 3% slower – and the 4790K pushes a 36FPS AVG with about a 5FPS reduction in low framerates.

The 2600K puts things into perspective a bit better, approaching 2x slower than the overclocked 7700K. 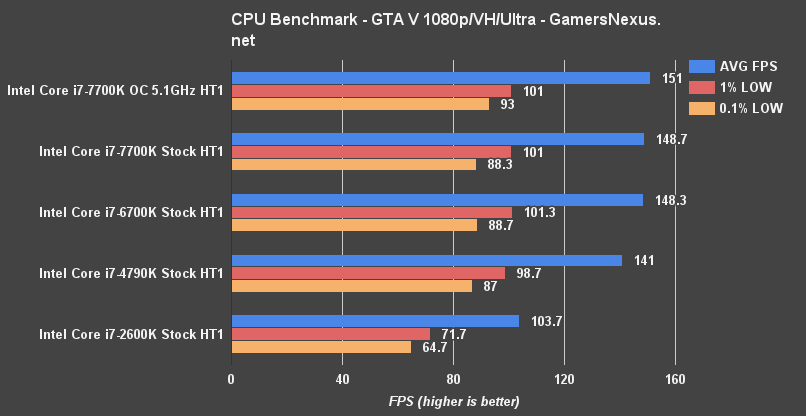 Moving on to GTA V, the chart is expectedly topped by the overclocked 7700K at 151FPS AVG, with lows sustained near 100FPS. There’s a few FPS reduction in performance to the stock 7700K, with nearly equal performance from the 6700K with this configuration. 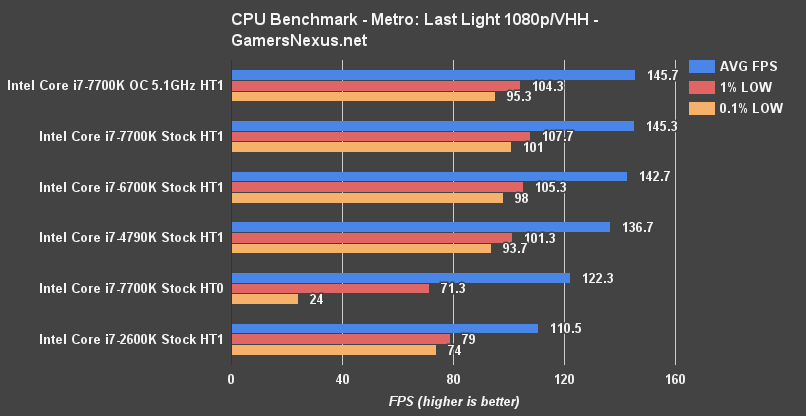 Our second-to-last title is Metro: Last Light, just for something a bit known. We’re seeing an average FPS of 145 on the 7700K at stock settings, with lows at 108FPS and 101FPS. Disabling hyperthreading, as we’ve always seen with Metro: Last Light, kills performance – but it’s also not a standard use of an i7. 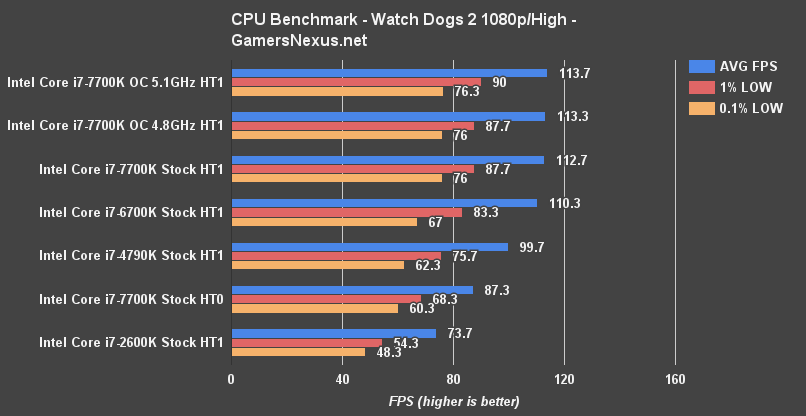 Watch Dogs 2 provides a look at a modern, mixed workload title. The game has some scaling between CPUs, but is pretty abusive on the GPU, too; this means that you’re getting a fuller picture at gain limits between CPUs, but also seeing that a multi-generational jump will greatly improve performance.

And that’s shown most obviously when referencing the i7-2600K CPU numbers, where we see an average FPS of 74, with lows at 54 and 48FPS. Even just skipping Ivy Bridge and jumping to Devil’s Canyon, we see more than a 20FPS gain. Jumping another generation, we land on the 6700K’s 110FPS AVG, with lows at 83FPS and 67FPS 0.1% low.

The 7700K stock CPU provides a performance throughput of 112.7FPS AVG, with lows at about 88 and 76. This gain isn’t something you’ll notice as a user between the 6700K and 7700K, but it’s noteworthy nonetheless. We’re looking at a jaunt of about 2.5% before hitting other barriers. Overclocking gets us another 1FPS or thereabouts, but that’s it.

In the immediate future, once CES is over, we’ll be revisiting i5, i3, and future Zen CPUs in benchmarks. We’re hoping to add a few more games at that time, like Total War for additional CPU-bound game benchmarks.

We’re also hoping to add some more unique benchmarks, but you’ll have to find those out as they’re posted.

Continue to Page 7 for the Kaby Lake conclusion.