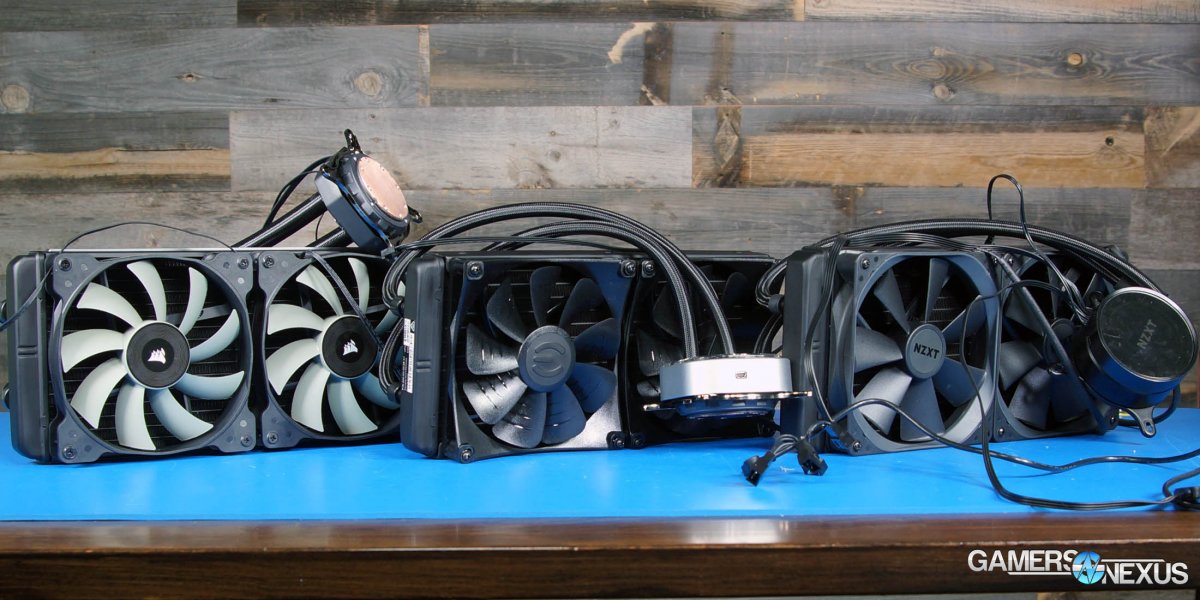 Starting with EVGA Only

Let’s start with only the EVGA results, then we’ll include other 280mm coolers. This will help simplify data presentation so that there is a cumulative increase in DUTs on the chart, since it otherwise gets complicated quickly.

Averaged across more than 1000 cells of data, we’re seeing a load temperature of 39.5C delta T while at the lowest fan RPM with the EVGA CLC 280, matched with a 7.3C idle temperature. The 1500RPM temperatures land at 5.4C idle and 34.7C load delta T, with the unbearably loud 2200RPM fan speed getting us an extra 2 degrees Celsius reduction in load temperatures. It’s absolutely not worth the noise though, as this output resembles a server room. We’ll look at dBA numbers last for folks curious about noise output. 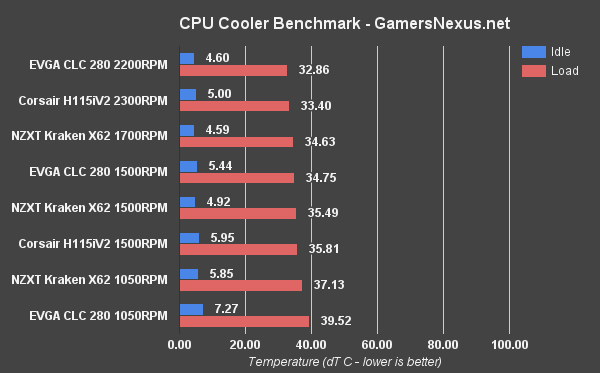 Let’s add the Kraken X62 and Corsair H115iV2 numbers to this chart.

Matching first against NZXT’s Kraken X62, the EVGA 280mm CLC, when matching RPMs to 1500, performs approximately 0.75C better than NZXT’s Kraken X62. For the most part, this is a shallow victory. We’ve got a known variance of approximately 0.5C in our results after accounting for calibration anyway, so these two coolers are more or less identical. NZXT is running at 35.49C delta T, with EVGA operating at 34.75C delta T.

At the top-end, EVGA has more RPM headroom on its fans to support a higher speed, and therefore tops the charts at 32.86C delta T – pretty damn good, but again, very loud. NZXT’s highest RPM is 1700, landing it at 34.63C delta T.

Moving down to 1050RPM, we see EVGA start to lose some ground against NZXT’s X62 unit. Our hypothesis to this 2C deficit against NZXT’s cooler is that EVGA likely loses power toward the low-end of the PQ curve, which is strictly a function of the unique fan design.

Corsair’s competing H115i is priced at $120, making it $10 cheaper than EVGA’s cooler and $40 cheaper than NZXT’s cooler. Looking at the performance, we see Corsair’s H115i at 1500RPM is functionally identical to the Kraken X62, and falls within our test-to-test variance. The Corsair and NZXT units are equal strictly in terms of cooling at this RPM, making Corsair the obvious choice if you don’t care for the LEDs. EVGA’s CLC 280mm cooler outperforms Corsair by about 1C when at 1500RPM. When we look at max RPMs, Corsair’s cooler can hit 2300RPM with its SP series fans, landing it at 33.4C load. EVGA’s new CLC 280 cooler lands at 32.86C load. 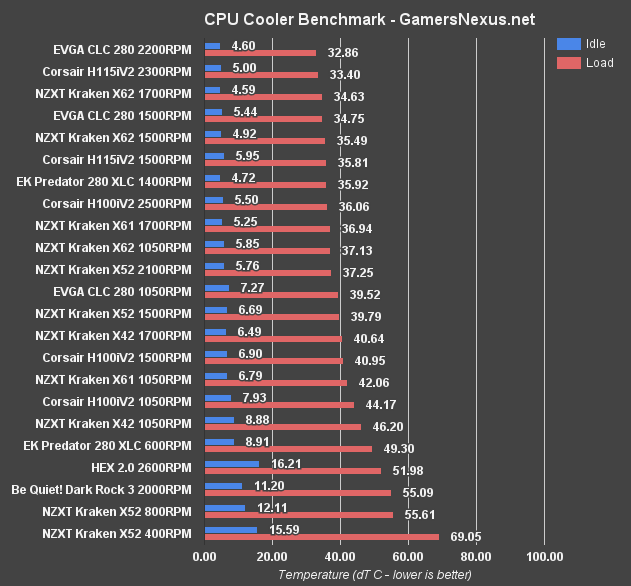 And finally, here’s a chart with the full results. This has a couple other coolers present, if you’re curious, though the most directly comparable units are still the 280mm coolers. Included above, we have also tested the smaller Kraken X52 240mm cooler, Corsair H100iV2 240mm cooler, and last-gen variants. 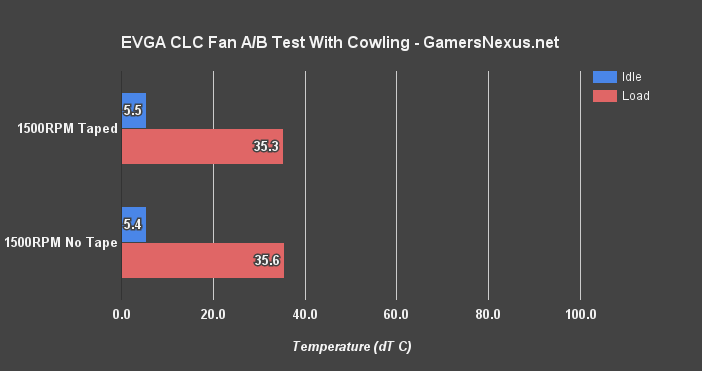 We decided to test the fan cowling depth (squared casing) on the new EVGA CLC 280 fans, seeing as they're so uniquely shaped and begged questions related to air "leakage" out the sides of the casing. Note the above "no tape" test was re-done as it had new thermal compound applied following the first round of tests, so was done again. For this test, we taped off the sides of the fans for an ad-hoc/rapid prototype of the fan with some cowling; this is not necessarily identical to how plastic would function, but as it was taut and formed the barrier, we still have a good baseline understanding. The results show that the fan cowling difference -- although visually significant -- does not present any noteworthy performance gap between the squared fan casing vs. EVGA fan casing designs. With a 0.3C swing, we are within our 0.5C test variance and can call these functionally equivalent. Despite EVGA's fans feeling like they are leaking air out the sides, they are performing just the same as if they had the squared casing. There may be a noise benefit, but we will have to test further later. 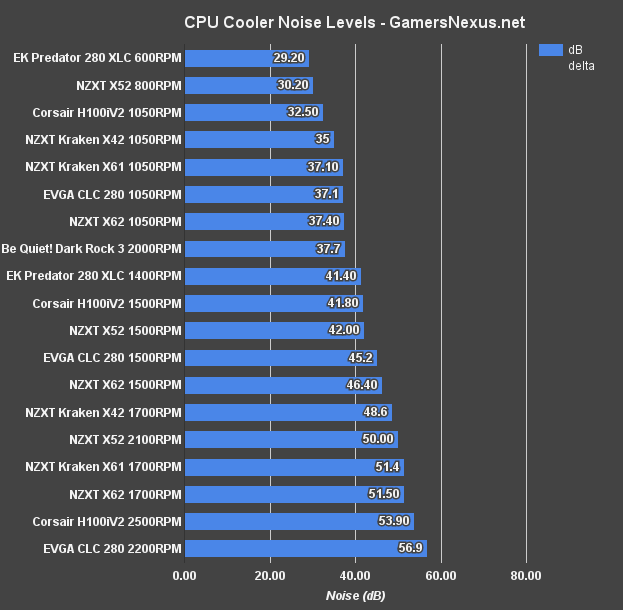 This is our final chart. For noise levels measured at 20” with a dB meter, we’re seeing the EVGA 280 and NZXT 280mm coolers both landing around 37dBA with a 1050RPM, though keep in mind that EVGA was 2C warmer at this speed, so there’s a bit of a trade-off. At 1500RPM, where EVGA was about 0.75C cooler thanks to its PQ curve, the EVGA unit runs at 45.2dBA with the NZXT X62 at 46.4dBA. We still have to test the Corsair H115i for noise levels, and will do that once back from our current trip. EVGA’s first attempt at an AIO is remarkably strong; they’ve come out swinging with the CLC series, outranking NZXT in noise levels just barely, and performing with a slight advantage in some cooling tests. EVGA falls behind by 2C when at the lower end of the fan speed curve, and could likely improve that by optimizing the fan design / static pressure for future generations. For a first generation product, EVGA has done well to rely on expert input from its partners at Asetek and its media / channel partners during development. It is not common that we see a first attempt at entering a new industry go over competitively (outside of price, anyway).

Ultimately, the product stack now looks like this: If you only care about price, the H115i is a strong competitor and significantly cheaper ($120) than NZXT’s X62 ($160). NZXT is the winner in the RGB department by a long shot, but also asks $160 for the unit. EVGA strikes a balance between price and looks, but still manages to pull ahead in cooling performance at roughly the same decibel output as NZXT’s X62. EVGA’s CLC 280mm cooler is priced actually reasonably for a debut launch, for once, and sits at $130 between the neighboring competition.

If function is all that matters, Corsair does have the most compelling price-to-performance argument in both the 240mm and 280mm categories. If you’re not hardcore about NZXT’s visual focus but still seek something more LED-driven than Corsair’s H115i, the EVGA CLC makes sense.