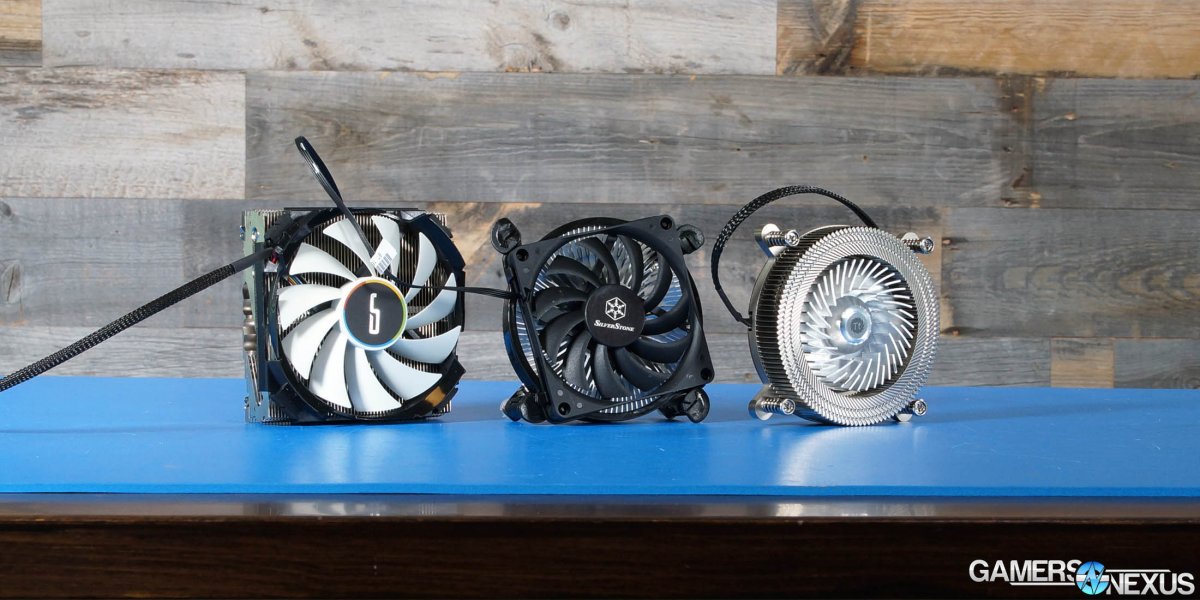 Getting into this review, we’re abandoning our standard cooler test bench in favor of an ITX-specific bench. These small form factor coolers can’t handle as much heat as the big stuff, with the TT Engine 27 rated for 70W TDP CPUs. Because of that, rather than use something way beyond spec like a 6700K, we’re opting for an i3-6300 CPU and an ITX motherboard. Ultimately, this cooler is meant for ITX, and so we’re testing it with that in mind.

But for competition, we’re testing against the SilverStone NT08-115XP and the Cryorig C7 coolers, both of which are also small form factor. The SilverStone unit measures at 33mm tall, with Cryorig’s quite a bit larger than both Thermaltake and SilverStone (at 47mm tall). This means that Cryorig’s will undoubtedly outperform both the others and at lower RPMs, but provides a smallest-to-largest look at performance.

We’re only showing three coolers for right now, as ITX cooler testing is new for us. The Cryorig C7 lands at the top of the bench with a load temperature of about 53C delta T. This cooler is also 47mm tall, or 20mm taller than the Engine 27 and 15mm taller than the NT08.

None of these are particularly impressive, but they are all more or less equal when considering the lessened cooling potential of a small form factor cooler. Cryorig’s C7 manages to properly differentiate itself with a more noteworthy advantage in cooling, and one which is attributable to its larger stature and superior heatsink, but Thermaltake and SilverStone aren’t too far apart.

The numbers that matter most, purely from a competing size perspective, will be the SilverStone and Thermaltake numbers.

For a proper comparison, we’re setting each cooler to run at an RPM that equals a noise output of 43dBA. This means the SilverStone cooler operates at 3300RPM and the Thermaltake Engine 27 operates at 2500RPM. Those two results land us at 60.1C versus 59.6C -- within our 0.5C range of variance on CPU temperature generation and measurement. For all intents and purposes, when equalizing the noise levels, these two coolers are identical. 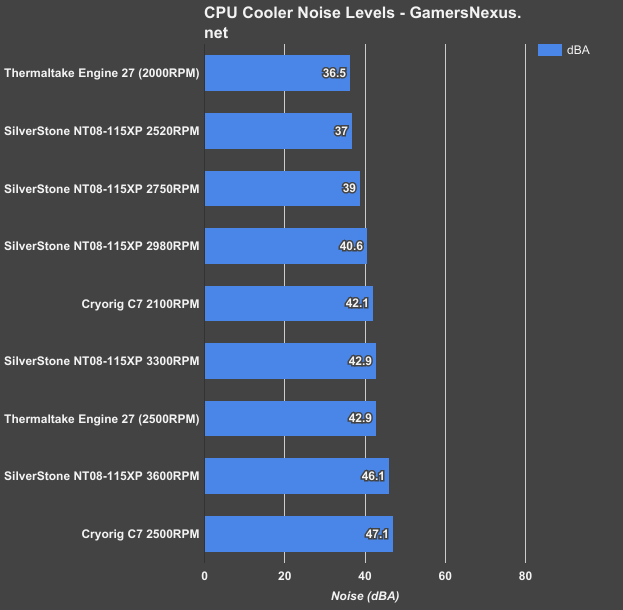 Here’s a chart showing all the noise levels. The coolers tend to be most effective in terms of cooling-to-noise when around 40dBA, just by coincidence, with the Engine 27 still maintaining some level of acceptable performance when at 70% fan RPM with a 36.5dBA output. It wouldn’t do so well with heavy load at that RPM, but idle and low workloads are sustainable.

If you want all of the noise levels for everything we’ve tested, here’s a quick chart for that: 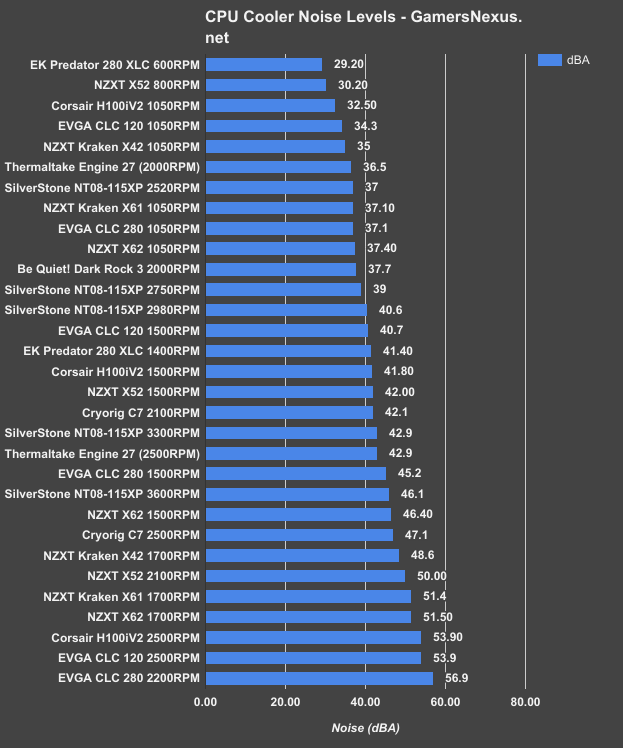 The test methods between platforms are comparable enough to look at all the data for coolers we’ve benched in the past, despite temperature testing being hugely different (different CPUs, motherboards, so forth).

One Thing About Noise

One thing that isn’t shown with our noise testing, though: The type of noise. We’re not doing frequency spectrum analysis, so what you don’t see is that the type of noise made by the Engine 27 is a high-pitched whine – very similar to the whine found in Sandia’s original video – whereas the SilverStone cooler’s same-dBA output is a lower-pitched hum. This is a lot more tolerable to the end-user. Running the Engine 27 at 100% fan speed is borderline unbearable, subjectively, but you’d hopefully be running lower RPMs in most HTPCs where workloads aren’t too devastating to cooling.

Conclusion: Is the Thermaltake Engine 27 Any Good? 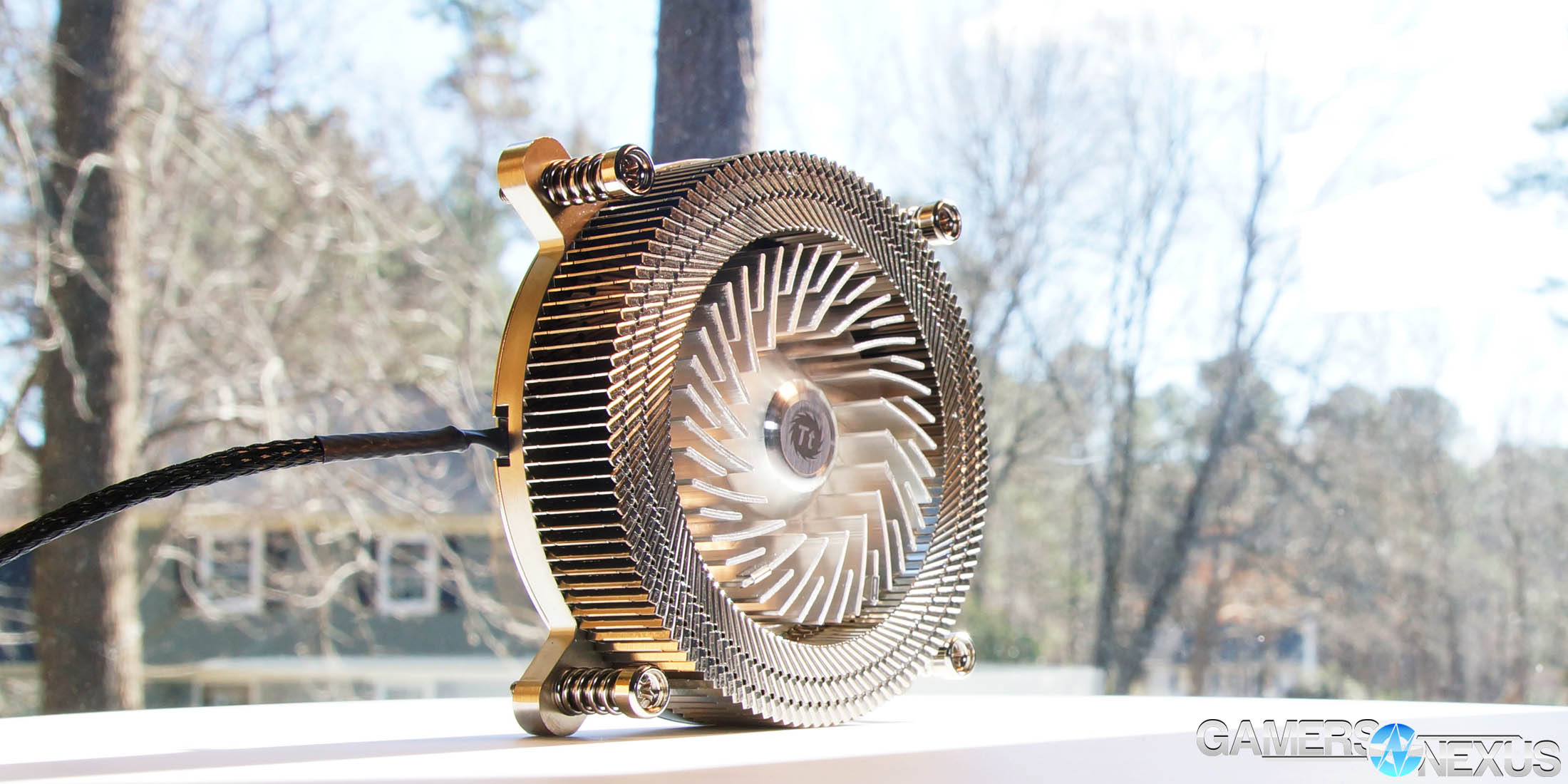 The Engine 27 is a unique attempt at making a small profile cooler. It’s interesting, and Thermaltake explained that they worked with Coolchip to develop the Engine 27 for this largely untried approach to cooling. Strictly in terms of thermal performance, it’s around where the comparably sized SilverStone NT08-115XP lands, particularly when considering equal noise output.

It’s also over two times the price, with the NT08 at $20 and the Engine27 at $50. If you can fit a 47mm cooler and still have breathing room above it, Cryorig’s C7 at $30 is the clear winner of all three coolers – it’s just a lot bigger, and won’t fit in slim HTPCs like the SilverStone PT series.

Ultimately, the Engine 27 isn’t a bad cooler – it performs about the same as similarly sized products, so it’s not some crime against humanity. That said, it’s priced significantly out of its performance bracket, and the high-pitched whine at max RPM can get a bit irritating. You’d want to run this at a lower RPM to account for that.