Thermal tests on Ryzen are difficult to trust, as were tests on the Bulldozer line. Actually, until the tools used to read temperatures are understood, generally all temperature readings in software should be regarded with some skepticism. AMD is still using its same sensor methods that it used with FX, doing some sort of temperature scaling. Sam Naffziger, Corporate Fellow at AMD, confirmed to GamersNexus that the temperature output by Ryzen’s junction sensor is not a straight Celsius value indicative of real temperature. It is scaled by a formula of some sort, and we are not able to gain access to that formula (though did ask).

This means that measurements in software like AIDA64, AI Suite, and other motherboard vendor solutions are sort of guessing. They’re either reading AMD’s TSI temperature – which we understand isn’t the real temperature, but an adjusted temperature based on maximum Junction temperature (TjMax) – or they’re doing some calculations. ASUS and AI Suite, for instance, pull data from AMD’s TSI temperature bus with its own thermistor on the board, its algorithm, and outputs its best guess. We have found ASUS AI Suite to align closely to TMPIN0 with HWMonitor Pro. We’ve found AIDA64 to be wildly inaccurate, depending on software revision, and have decided it to be untrustworthy for Ryzen in our testing. 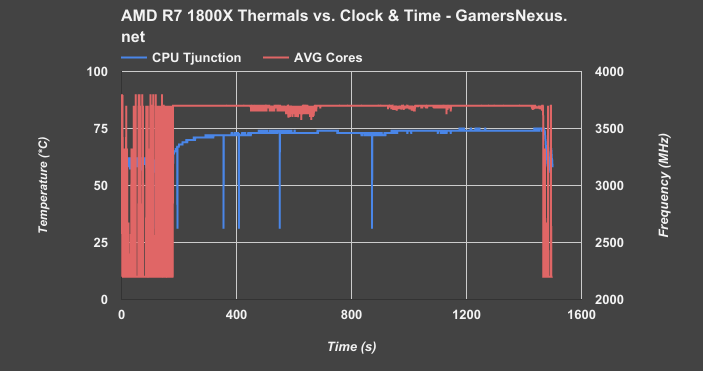 This first chart shows two things, primarily: We’re looking at CPU junction temperature in blue and averaged core frequency in red during a Prime workload. Ideally, the red line is perfectly flat when under heavy load, indicating a more stable core clock. The blue line should never exceed 75C, as that is AMD’s maximum junction temperature for the 1800X – or TjMax. We were able to trip a thermal shutdown by intentionally heating the CPU beyond 75C, validating that TjMax is in fact around 75C (+/-2C reading in AI Suite). Note that although the junction sensor is perfectly precise, it is not necessarily perfectly accurate – nor is software’s ability to interpret the sensor data. There may be latencies in some software solutions, and other differences in sensor accuracy could mean that you see temperature reports exceeding 75C; that does not mean Tjunction is actually >75C in reality, it just means that the sensor thinks that’s the case. Depending on what type of sensor is used, there are often accuracy ranges of 1-2.2C. Precision remains unimpacted by this. Using software which does not make adjustments to the raw junction output by the CPU means, like in the case of early AIDA64 revisions during this testing, that you may see temperatures ~20-30C below what reliable tools report.

We did our best with a combination of AI Suite and HW Monitor. Ryzen Master was not made available to media until we were on planes for an event. Prior to our finalized test run, we mounted thermocouples to the IHS to get an understanding of external case temperature, then compared that to a few other DUTs to build a knowledgebase of the temperature logging behavior on Ryzen. This was plotted versus various software solutions. We then removed those thermocouples and began temperature testing with our chosen two.

Gauging thermal performance on AMD isn’t exactly easy, and the diode reporting has some inconsistencies at times that manifest in the form of massive reported temperature drops. 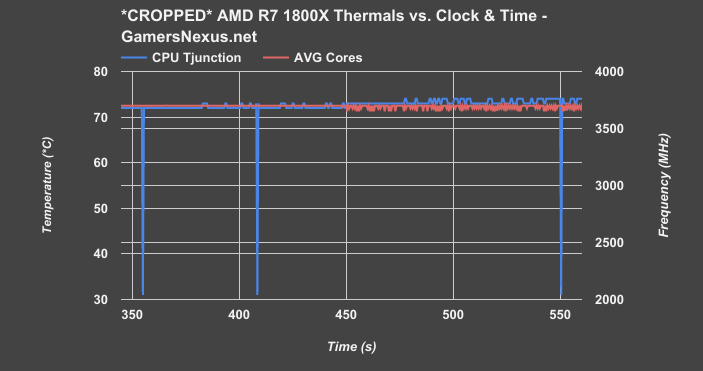 If we zoom into the chart, you’ll see that the clock-rate (using an nT workload) becomes less stable and starts to fluctuate in increments of 25-75MHz once temperature approaches 73-75C. This is AMD’s internal sensors working with the clock to keep thermals under control, down-clocking in rapid intervals to keep thermals below 75C. In other words, “expected behavior.” This is a worst-case Prime workload with an NZXT Kraken X62 at maximum fan and pump speeds (X62 review here). We see these temperatures in endurance production workloads as well, e.g. 100% load with Blender. Anyone putting this chip under 100% load for long uptimes, like CPU rendering, should seriously consider a better cooler than the Noctua unit that is most commonly paired with the CPU.

We also logged voltages versus applications, clock, and power draw. Here’s a look at those sort of ad-hoc results:

With 185W total system power consumption – again, this is for the full system – we see the Ryzen R7 1800X operating at a steady boost frequency of 3.7GHz when all cores are engaged. This number can boost to 4.1GHz when only two cores are engaged, leaving the rest at lower clocks during unutilized periods. The voltage to sustain Blender at this clock and 100% load ranges from 1.221 vCore to 1.243 vCore. Cinebench 1T pushes us up to 4.1GHz at times, but fluctuates between 3.7 and 4.1. This workload generates a voltage of about 1.395 to 1.461 vCore, with total system power consumption at 92W. Finally, POVRay 1T runs a 94W system power draw, with 4.1GHz fixed for the frequency – fully in XFR range – and a core voltage of about 1.417v.

Continue to Page 5 for the synthetic benchmarks.