Exiting the power, thermal, and voltage heuristics, we now look to our first tests. This initial lineup includes synthetics and validation of AMD’s claims regarding Cinebench. Once we’ve established a baseline with FireStrike, TimeSpy, and Cinebench, we can move to production workload encoding and to game benchmarking.

This first test is 3DMark’s TimeSpy benchmark, offering a Dx12 performance look in a synthetic environment. TimeSpy provides framerate numbers alongside its CPU scoring and total score. The numbers we care most about are the “CPU Score” and “CPU FPS” metrics, with “Total Score” serving more as a validation point. 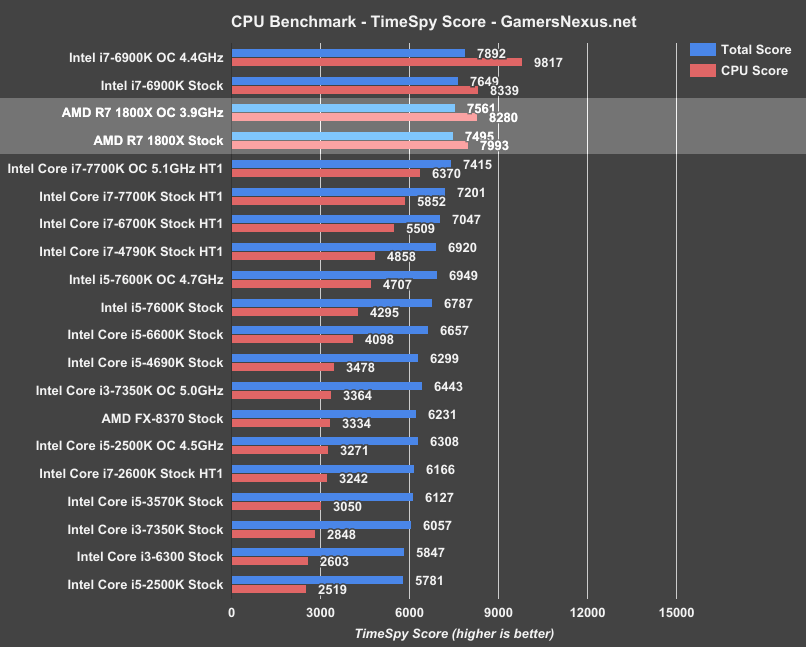 Sorting by CPU score, the AMD R7 1800X comes out looking strong in our first synthetic benchmark. It’s not quite up to the i7-6900K’s performance in this test (stock – we do not downclock the Intel CPUs like AMD has done in its demo), but at $500, the proximity grants bragging rights to Ryzen. The R7 1800X performs within a couple percentage points (~4%) of the i7-6900K when both are stock. Overclocking Ryzen gets us nearly equal to the i7-6900K, but applying an OC to Intel’s $1000 K-SKU part pushes it far above the rest of the bench. Intel overclocks higher right now, and additional memory overclocking headroom can help in other memory-specific tasks. 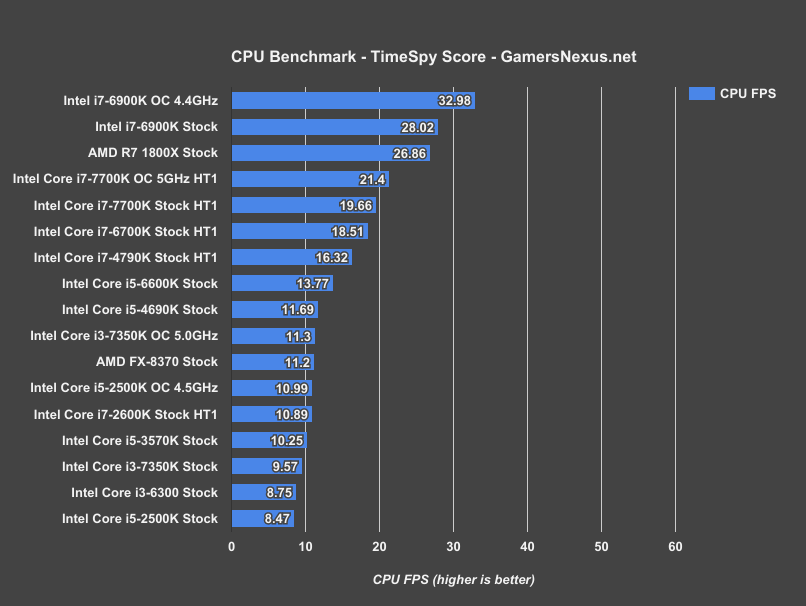 These comprise the above scores (some runs may be averaged over multiple passes). Should provide a more relatable set of metrics, though we have actual games for that later.

Moving on to 3DMark’s FireStrike suite at 1080p: 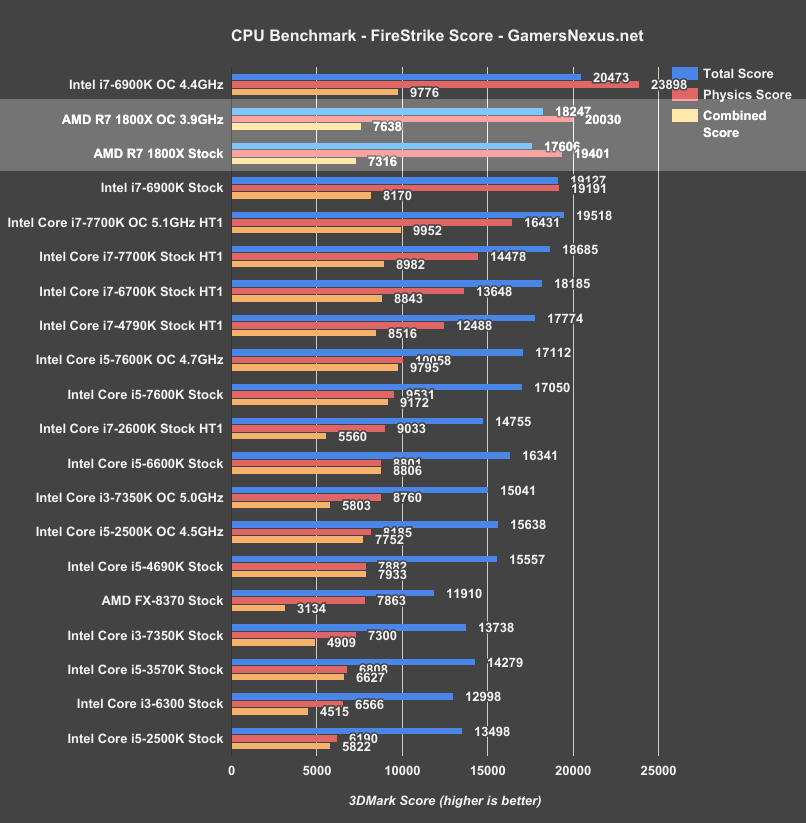 In this benchmark, AMD looks pretty good. The R7 1800X falls prone only when we overclock the Intel i7-6900K to 4.4GHz, even when we also OC the 1800X to 3.9GHz (its maximum stable overclock on our bench). Still, landing where it does is, again, a feat worthy of note. We still have to look at real-world tests, but Ryzen starts off strong in synthetics, Cinebench (as AMD demonstrated), and some production workloads. The 1800X is at least marginally ahead of the i7-6900K when both are stock (19191 physics vs. 19401 physics, or a measured difference 0.67FPS – within FireStrike’s usual pass-to-pass variance). 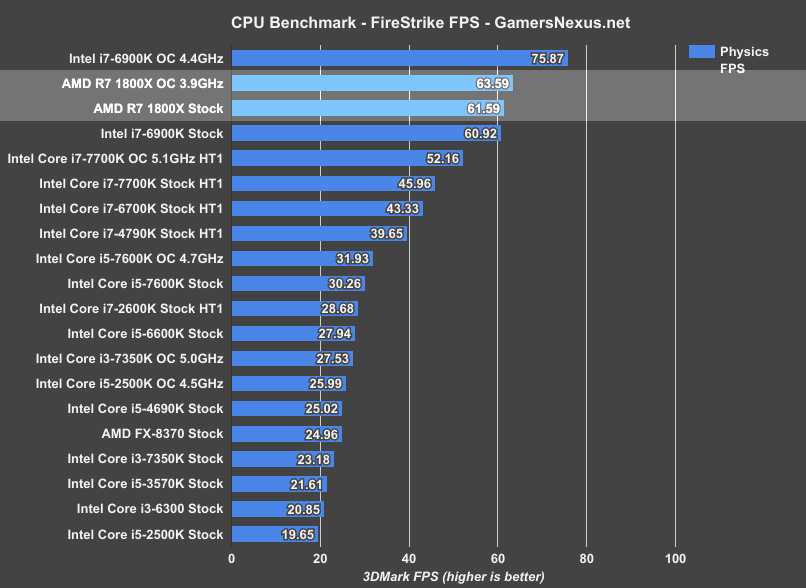 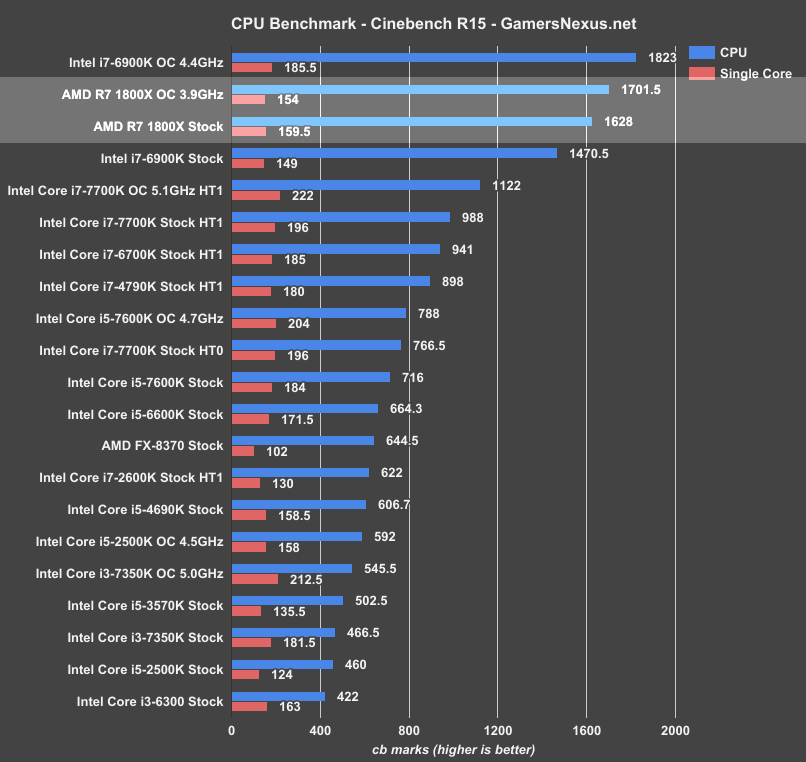 Cinebench isn’t everything, but early marketing slides might have you believing it is.

With Cinebench testing, the R7 1800X continues its synthetic lead from FireStrike. AMD is weaker when overclocked, but manages to best the 6900K (both stock) by roughly 10%. Note that 1T performance falls in the OC test as a result of XFR falling into disuse when manually tuning clocks, and so we actually reduced our 1T performance from 4.0-4.1GHz (variable) to 3.9GHz (forced OC). This is still better for nT performance.

The Persistence of Vision ray tracer software (version 3.7.1 beta) offers a heavy CPU render test, where we use a standardized benchmark (not comparable with 3.6.x) for ray trace testing. POV-Ray can render atmospheric and particle effects, reflections, radiosity, and multiple light sources and bounces. We use the built-in single- and multi-threaded benchmarks (1T and nT, respectively). 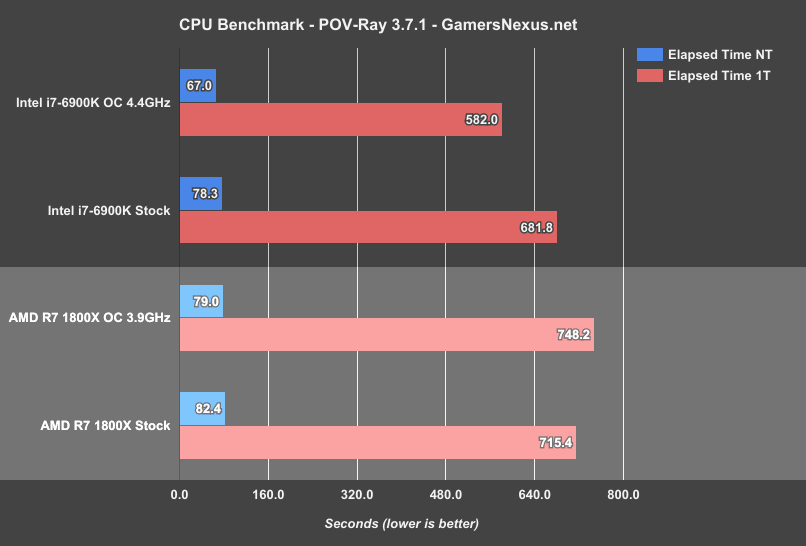 Intel pulls ahead in POV-Ray for both multi-threaded and single-threaded performance (again: 1T time increases on the OC 1800X as a result of the loss of XFR). We’re looking at 78.3s nT on the 6900K stock, or 82.4s on the 1800X stock. This test is conducted a minimum of three times and averaged.

We’ll move on to real-world rendering benchmarks for the next set of tests, using Premiere and Blender to provide that data.

Continue to Page 6 for the rendering benchmarks.