Note: If you've skipped every other page and come straight here, please consider reading the previous pages before posting comments with questions. The methodology page likely answers most basic questions.

Our standalone Watch Dogs 2 CPU benchmark demonstrated the game’s propensity for multithreaded scaling, including utilization up to 16 threads on the 6900K (and now R7 1800X). WD2 stands as one of the best real-world gaming benchmarks for multithreaded CPUs, thanks entirely to its responsiveness to threads and (to a lesser extent) CPU frequency.

For additional research on Watch Dogs 2, check out our WD2 CPU Optimization guide, which talks graphics settings and the individual impact on CPU performance. 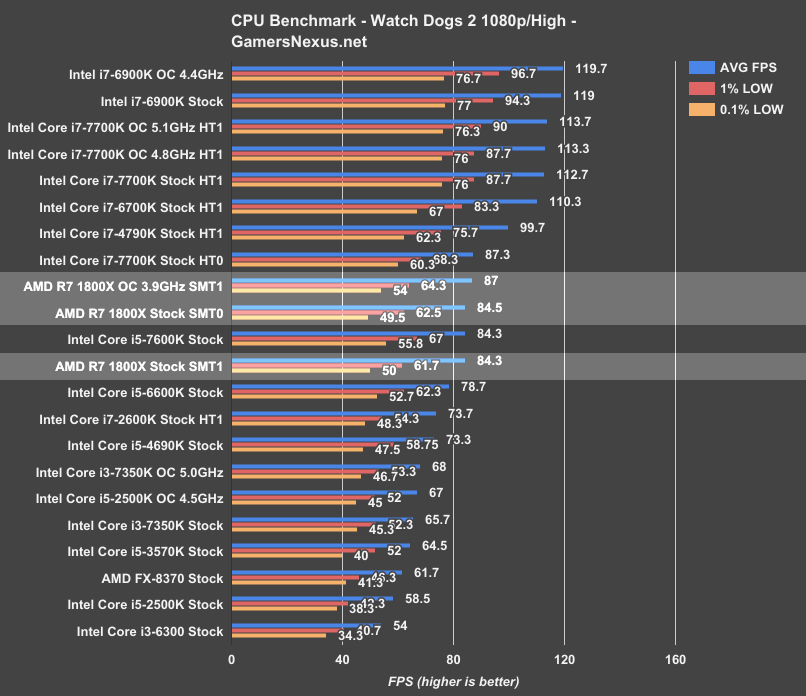 Disabling hyperthreading on the i7-7700K plants us about equal with AMD’s R7 1800X (SMT enabled, so 8C/16T), further demonstrating an Intel architectural advantage outside of raw core/thread count; at least, an advantage in gaming workloads – AMD has already demonstrated a clear advantage in production workloads, shown on page 6 of this review.

Overclocking the R7 1800X pushes to 87FPS AVG, with marginal (read: unnoticeable) improvements in lows to 64.3 1% and 54 0.1%. The maximum sustainable overclock with our chip and motherboard seems to be about 3.9GHz, resulting in a percent increase of ~3.2% from stock (3.7GHz on all cores) to the overclocked variant.

This illustrates quite clearly that just having more cores doesn’t win all arguments, but that’s something we’ve experienced time and again with CPU architectures. There’s more to architecture than just cores, threads, and clock speeds, as detailed on the first page of this review.

In fact, disabling SMT reveals that performance is largely the same in Watch Dogs 2 – though we’ll see a decrease in other games – netting an output of ~85FPS AVG versus the original 84.3FPS AVG. SMT doesn’t help AMD here, but let’s check Battlefield for a better idea. 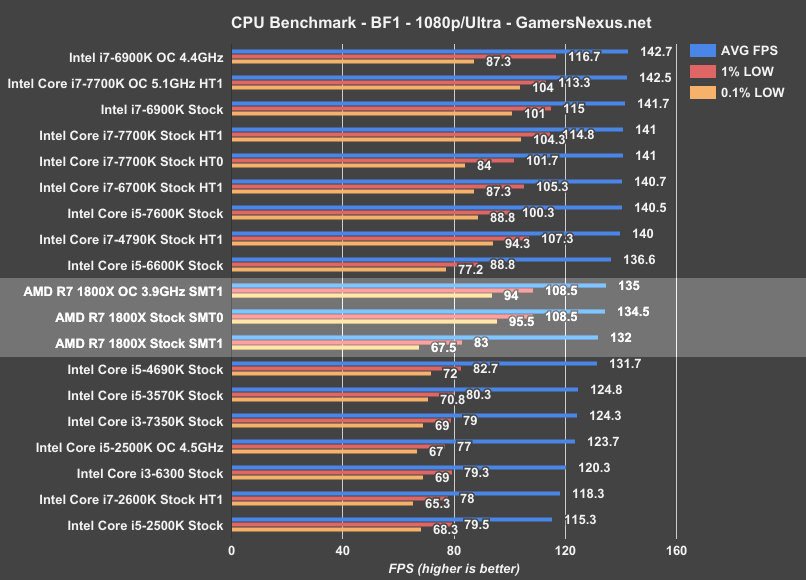 Disabling SMT on the R7 1800X results in performance that boosts to 134.5FPS AVG, up from 132FPS AVG. Because GamersNexus also measures frametimes, we benefit from the knowledge that disabling SMT further increases 1% low and 0.1% low metrics by upwards of ~30FPS (around 30% better 1% low values with SMT off).

Let’s move on for now, then loop-back later to see how imposing more of a GPU bottleneck impacts things. 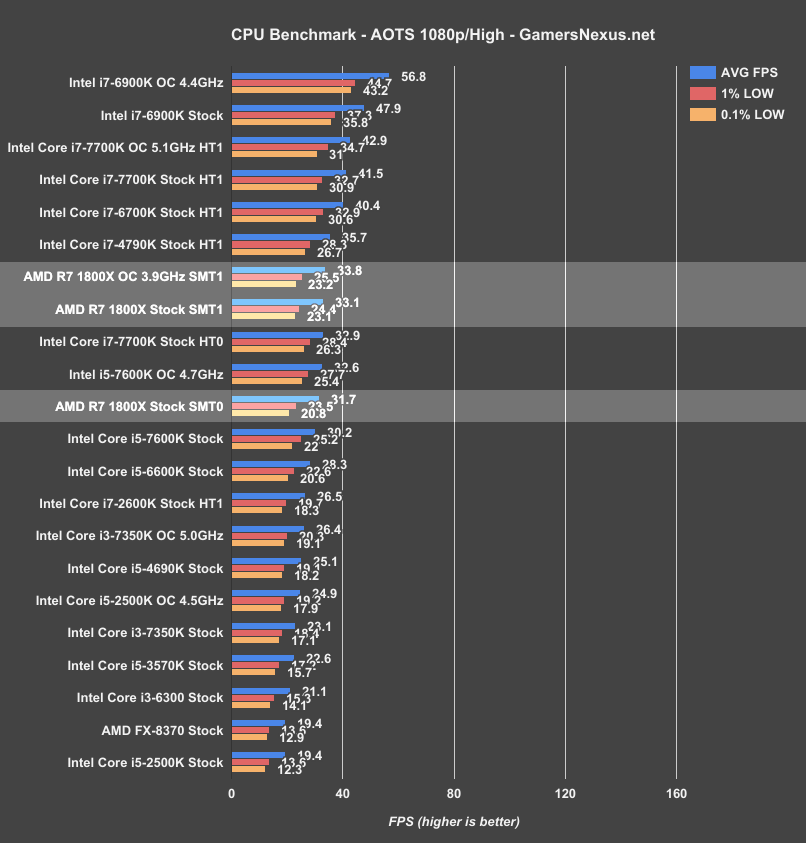 Ashes of the Singularity offers a glimpse into DirectX 12 performance, where we use the CPU-specific test and 1080p/High settings to pit processors against one another in a high-stress gaming workload. The i7-6900K at 4.4GHz plants us around 56.8FPS AVG, with low performance around 44.7 and 43.2FPS (1%, 0.1% respectively). This overclock is a significant gain over the 47.9FPS AVG of the 6900K stock, netting a jump of approximately ~15%.

In the very least, this is a more defensible position than the 1800X’s outflanked standing on the Battlefield 1 chart – we’re no longer in territory of i5 CPUs from five years ago. We see again that cores and threads aren’t everything, given the lower-level intricacies of what exactly constitutes those cores.

Disabling SMT in Ashes of the Singularity results in a performance decrease of roughly 1-2FPS AVG, and so is insignificant overall. This game seems to get some slight benefit out of SMT. 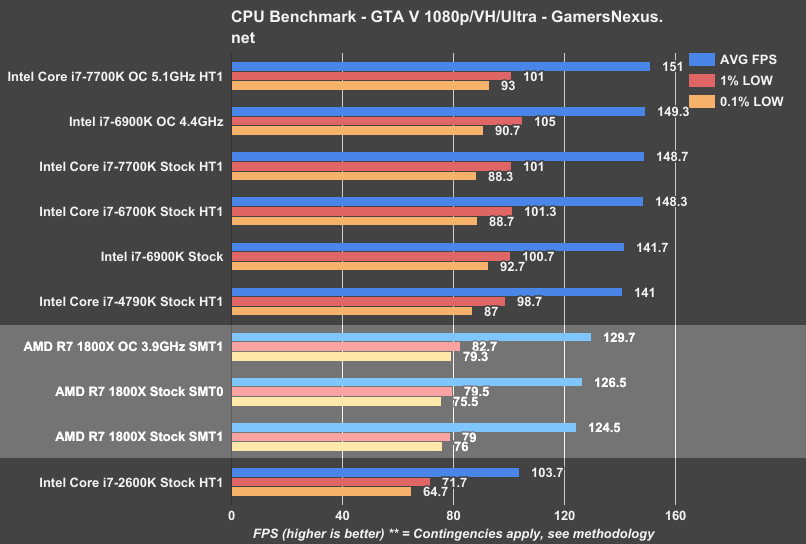 GTA has several issues in testing, but it’s not a problem if you know what they are. We eliminate four-core CPUs from this benchmark for methodological reasons. View here. Note that the game engine limits framerate to a hard ~187 (187.5, it seems), and so any CPUs performing in excess of this during spikes will not count the framerate with the greatest accuracy, as we run out of headroom. This means that the 6900K and 7700K OC CPUs are actually capable of higher averages, but the spikes exceed the engine framerate cap. We are working toward deprecating GTA V in our benchmark, but it still has usefulness for eight-core CPUs.

Overclocked, AMD pulls up to ~130FPS AVG (with an appropriate increase in lows). Compared to the OC’d 7700K at 5.1GHz, which is bumping hard against the framerate cap in some scenes, we see the 1800X decreases the theoretical maximum throughput by >16%. 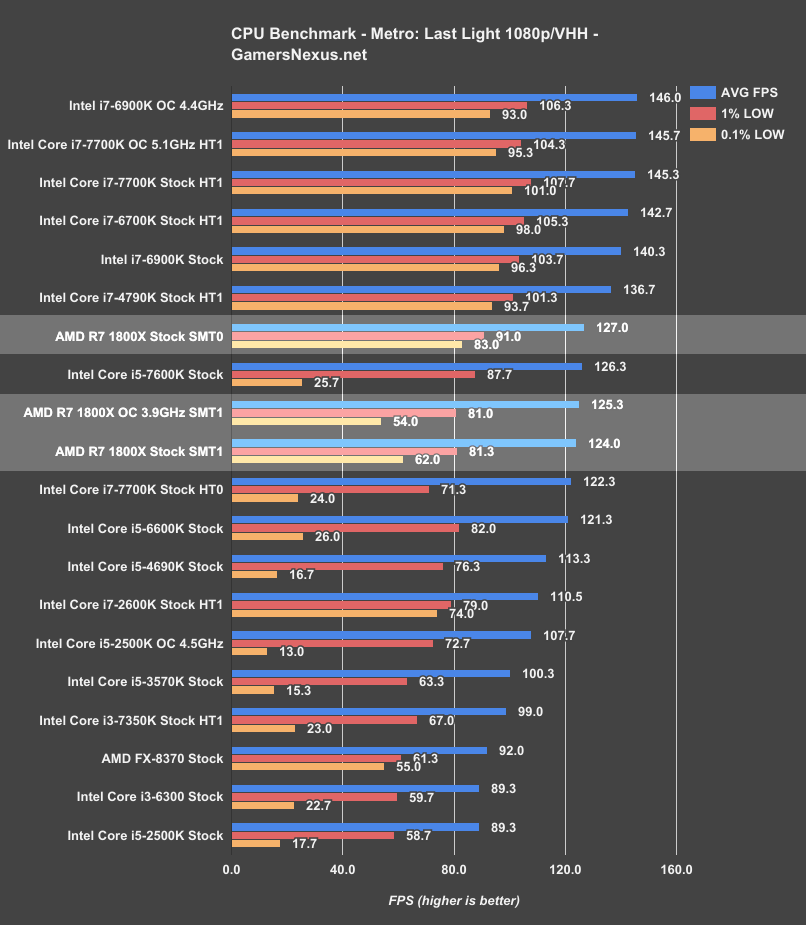 Metro: Last Light has historically penalized games in the 0.1% low department for two things: Threading and clock-rate stability. Overclocks that border instability are more likely to show poor 0.1% low performance, as are Intel i5 and i3 CPUs that operate on just four total threads. This is shown clearly in the 6600K and 4690K performance, where we have some bouncing around between low-end frametime performance (tends to become less repeatable, too; the ‘tightness’ of results decreases).

The AMD R7 1800X with SMT enabled (stock) operates at 124FPS AVG, or about 3FPS behind when SMT is disabled. Frametime performance also decreases with SMT, dropping from 83FPS 0.1% low to ~62FPS. We believe this is related to some sort of resource contention, though we are presently unclear on whether that’s more on the game side or the uCode/CPU side. AMD's cores do show a real advantage in Metro, and it's in the low frametime metrics. It's still not competing head-to-head with a cheaper i7-7700K, but the lows are better than i5s of comparable averages. 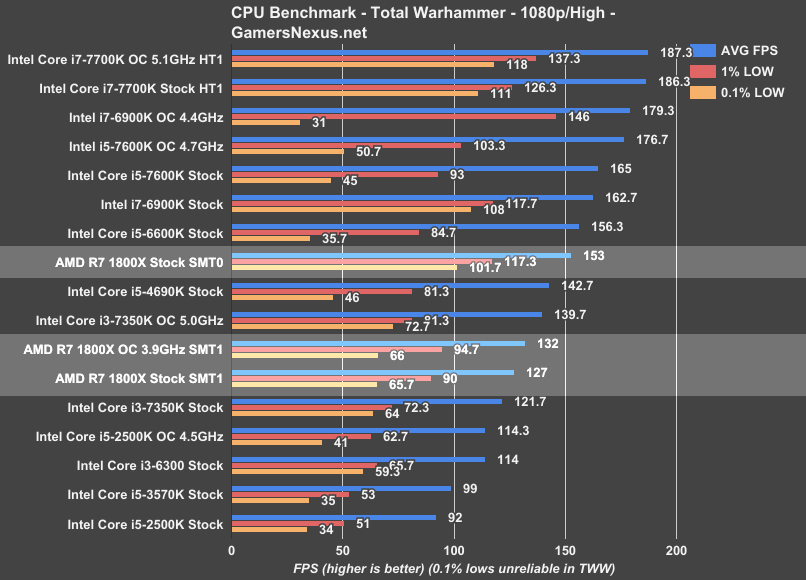 We’re still adding to our Total War: Warhammer benchmark listing. The game was only just added to our charts in time for the i5-7600K review & i5-2500K revisit articles, and so i7 CPUs haven’t been fully subsumed by the Warhammer bench. Thus far, we’ve added the i7-7700K and i7-6900K, alongside all the usual i5/i3 suspects (and the FX-8370). Warhammer is also finnicky about overclocking stability, as you’ll see with the low frametime metrics in the 6900K OC values.

Total War is one of the most CPU-intensive game series we’ve worked with, right up there alongside Watch Dogs 2. That said, the game does appreciate clock-speed to a great extent: we see the tradeoff between cores and frequency when ricocheting between the i7-7700K and i7-6900K processors. The i7-7700K pulls ahead in every regard when pitted against the 6900K, thanks to its 4.5GHz and 5.1GHz clocks, and lands around 186~187FPS AVG. Our lows (stock) operate at 126FPS 1% and 111FPS 0.1%; overclocking pushes those to 137FPS 1% and 118FPS 0.1% low.

As for the Ryzen R7 1800X, the new Zen arch CPU lands between the i3-7350K ($180) stock and 5.0GHz overclocked variant (reviewed here). Total War shows a clear frequency focus, further emboldened by the 1800X’s ~5FPS (~4%) FPS increase from a 200MHz overclock. Partly for this reason, among other architectural advantages, Intel again holds the lead even with processors of significantly lower cost. We still wouldn’t recommend that you go out and buy an i3-7350K (at least, not at $180), but the 1800X performs just slightly better than the overpriced (but still cheaper) i3 K-SKU.

When we approached AMD with these results pre-publication, the company defended its product by suggesting that intentionally creating a GPU bottleneck (read: no longer benchmarking the CPU’s performance) would serve as a great equalizer. AMD asked that we consider 4K benchmarks to more heavily load the GPU, thus reducing workload on the CPU and leveling the playing field. While we fundamentally disagree with this approach to testing, we decided to entertain a mid-step: 1440p, just out of respect for additional numbers driven by potentially realistic use cases. Of course, in some regard, benchmarking CPUs at 4K would be analogous to benchmarking GPUs at 720p: The conclusion would be that every GPU is “the same,” since they’d all choke on the CPU. Same idea here, just the inverse.

We’ve only run a few CPUs for these tests, since they’re not part of our standard bench. Here’s a look at Watch Dogs 2 at 1440p/High:

The AMD R7 1800X – even when taking AMD’s suggestion of burdening the GPU (again, we don’t necessarily agree with this methodology) – is still performing at a framerate deficit to the cheaper i7-7700K. Now, of course, the next argument might be that the visible difference between 86FPS and 77FPS AVG is not profound – and that’d be a fine argument. Unfortunately, it still doesn’t make sense to spend more money and get less. That’s just bad value; besides, when considering the CPU and platform tend to last the longest in a system, the upgrade pathways (to stronger GPUs) are going to be better on the platform which has the highest baseline performance.

The next argument might be that mixed workload users, like content creators, would benefit from the production advantages afforded by Ryzen. That’s a much stronger argument, but still has caveats and counters; we’ll point you back to Page 6 for that discussion.

All that said, let’s look back to the numbers one more time: Frametimes suffer a bit with the 1800X, falling to ~48FPS 0.1% low and ~60FPS 1% low versus the 7700K’s ~68FPS 0.1% low and ~74FPS 1% low metrics. This isn’t something where we’re seeing stuttering (you’d have to fall lower for that), but it does indicate that AMD has other potential weaknesses that could emerge under the right conditions.

Moving on to Battlefield 1 at 1440p, where we’re definitely developing a GPU bottleneck (and beginning to invalidate the wants of 120/144Hz users), we see similar hierarchy:

Ryzen’s R7 1800X, using the GPU as a crutch, is now more or less on-par with the 7700K and 6900K CPUs (demonstrably GPU bottlenecked). We’re still seeing decreased frame latency versus Intel, but like with Watch Dogs 2, that’s not producing any noticeable stuttering to the end user – it’s just a measurable difference.

In this particular title, benchmarking incorrectly does in fact make the numbers look better for AMD – but the 7700K still outperforms the 1800X, and the 7700K is still cheaper. We’ll have to see how the R7 1700 ($330) performs for a better glimpse at AMD’s future as a competitive performer in video games.

Continue to Page 8 for the conclusion.