At this point, you might be left feeling disillusioned when considering AMD’s tech demos. Keep in mind that most of the charts leaked and created by AMD revolved around Cinebench, which is not a gaming workload. When there were gaming workloads, AMD inflated their numbers by doing a few things:

In the Sniper Elite demo, AMD frequently looked at the skybox when reloading, and often kept more of the skybox in the frustum than on the side-by-side Intel processor. A skybox has no geometry, which is what loads a CPU with draw calls, and so it’ll inflate the framerate by nature of testing with chaotically conducted methodology. As for the Battlefield 1 benchmarks, AMD also conducted using chaotic methods wherein the AMD CPU would zoom / look at different intervals than the Intel CPU, making it effectively impossible to compare the two head-to-head.

And, most importantly, all of these demos were run at 4K resolution. That creates a GPU bottleneck, meaning we are no longer observing true CPU performance. The analog would be to benchmark all GPUs at 720p, then declare they are equal (by way of tester-created CPU bottlenecks). There’s an argument to be made that low-end performance doesn’t matter if you’re stuck on the GPU, but that’s a bad argument: You don’t buy a worse-performing product for more money, especially when GPU upgrades will eventually out those limitations as bottlenecks external to the CPU vanish. 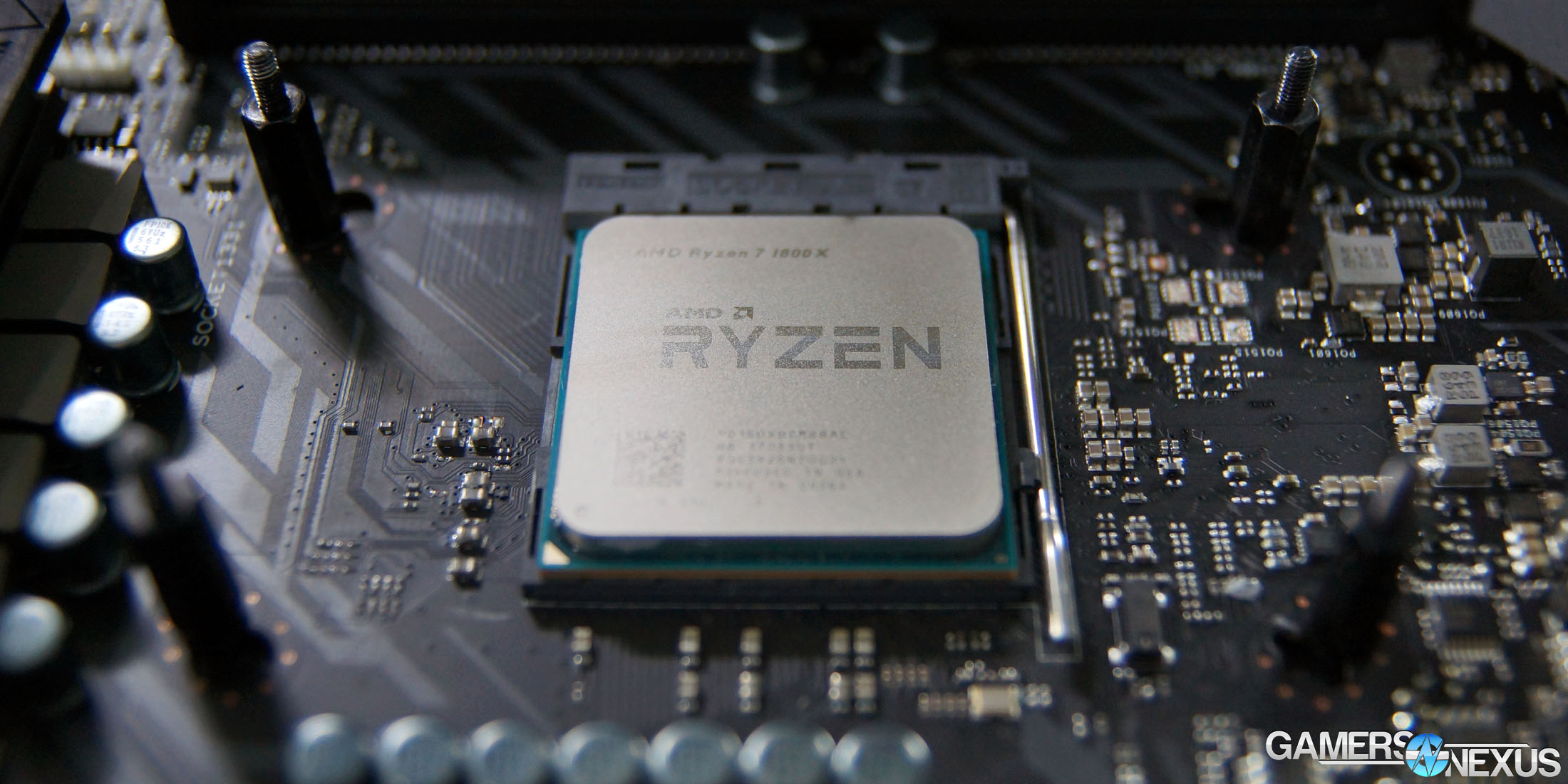 As for Blender benchmarking, AMD’s demonstrated Blender benchmarks used different settings than what we would recommend. The values were deltas, so the presentation of data is sort of OK, but we prefer a more real-world render. In its Blender testing, AMD executes renders using just 150 samples per pixel, or what we consider to be “preview” quality (GN employs a 3D animator), and AMD runs slightly unoptimized 32x32 tile sizes, rendering out at 800x800. In our benchmark, we render using 400 samples per pixel for release candidate quality, 16x16 tiles, which is much faster for CPU rendering, and a 4K resolution. This means that our benchmarks are not comparable to AMD’s, but they are comparable against all the other CPUs we’ve tested. We also believe firmly that our benchmarks are a better representation of the real world. AMD still holds a lead in price-to-performance in our Blender benchmark, even when considering Intel’s significant overclocking capabilities (which do put the 6900K ahead, but don’t change its price).

As for Cinebench, AMD ran those tests with the 6900K platform using memory in dual-channel, rather than its full quad-channel capabilities. That’s not to say that the results would drastically change, but it’s also not representative of how anyone would use an X99 platform.

Regardless, Cinebench isn’t everything, and neither is core count. As software developers move to support more threads, if they ever do, perhaps AMD will pick up some steam – but the 1800X is not a good buy for gaming in today’s market, and is arguable in production workloads where the GPU is faster. Our Premiere benchmarks complete approximately 3x faster when pushed to a GPU, even when compared against the $1000 Intel 6900K. If you’re doing something truly software accelerated and cannot push to the GPU, then AMD is better at the price versus its Intel competition. AMD has done well with its 1800X strictly in this regard. You’ll just have to determine if you ever use software rendering, considering the workhorse that a modern GPU is when OpenCL/CUDA are present. If you know specific in stances where CPU acceleration is beneficial to your workflow or pipeline, consider the 1800X.

For gaming, it’s a hard pass. We absolutely do not recommend the 1800X for gaming-focused users or builds, given i5-level performance at two times the price. An R7 1700 might make more sense, and we’ll soon be testing that.

AMD defends its position by indicating the ISVs need to begin supporting their product, and has provided us statements from StarDock and Bethesda relating to this. To these statements, we’d remind folks that games take a long time to develop. Buying a CPU now in the hopes that games will better leverage 16T CPUs in a few years is a risky move – particularly with Bethesda’s track record for game optimization.

Regardless, we’ll provide the quotes that AMD passed along:

“Oxide games is incredibly excited with what we are seeing from the Ryzen CPU. Using our Nitrous game engine, we are working to scale our existing and future game title performance to take full advantage of Ryzen and its 8-core, 16-thread architecture, and the results thus far are impressive. These optimizations are not yet available for Ryzen benchmarking. However, expect updates soon to enhance the performance of games like Ashes of the Singularity on Ryzen CPUs, as well as our future game releases.” - Brad Wardell, CEO Stardock and Oxide

Note that the above was in response to poor performance of the 1800X in Ashes of the Singularity.

"Creative Assembly is committed to reviewing and optimizing its games on the all-new Ryzen CPU. While current third-party testing doesn’t reflect this yet, our joint optimization program with AMD means that we are looking at options to deliver performance optimization updates in the future to provide better performance on Ryzen CPUs moving forward. " – Creative Assembly, Developers of the Multi-award Winning Total War Series

This, we believe, was a response to the Total War: Warhammer performance that we observed, given Creative Assembly’s previous partnerships with AMD to promote the FX-6350 CPUs.

AMD’s best wasn’t enough for gaming workloads. If production is your thing, check the relevant benchmark page for more information. The price:performance in that category is the one saving grace for the R7 1800X.

The R7 1700 may prove a better value for gaming; we’ll have those benchmarks shortly. For now, though, the 1800X is a disappointment, and is not a processor we recommend for gamers when considering the price-point. If you were to buy it, disable SMT for gaming. It’s mostly detrimental, likely due to resource contention among threads in gaming environments. Even mixed workload users should consider when and where software acceleration is better than GPU acceleration, if ever for their needs, before purchasing the 1800X. Do the research on your applications. For what we do with media production, it makes no sense to render software-accelerated; that doesn’t mean it never makes sense.

But yes: The 1800X is an impressive competitor to the 6900K in production, and it’s significantly cheaper. We’d recommend the 1800X over the 6900K for folks who genuinely use software acceleration. It’s just not good for gaming, and GPUs kill both AMD and Intel CPUs in accelerated rendering.

If you're on this page without reading the others, we'd suggest taking a second look back over them. The review is dense with information and took a significant effort to complete.

To the team: Thank you for assisting in accomplishing this tremendous feat in just 4-5 days, while also sustaining travel across the country four times in the past week.