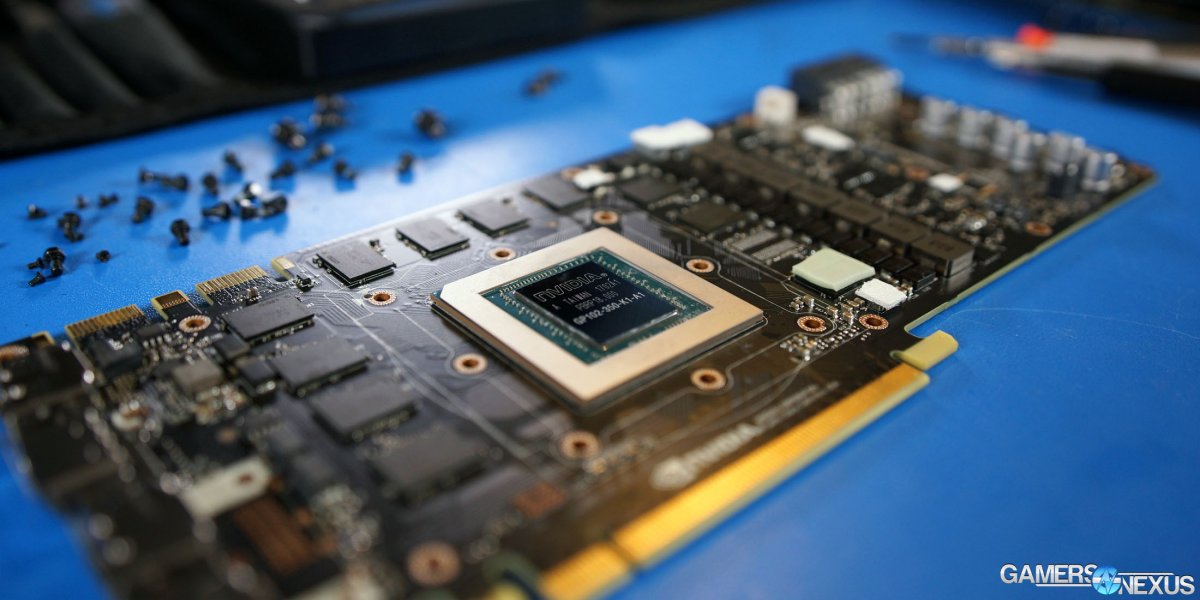 Our thermal tests are up first. For these benchmarks, we’re measuring MOSFET temperature in the middle of the board and at the bottom of the board – so that’ll be FETs 2 and 7 on the 1080 Ti, on the ICX GTX 1080, or FETs 1 and 5 on the GTX 1080 FE card, counting up. Page 2 describes the thermocouples used and talks calibration, chemical composition of adhesive pads, positioning, and more. If that’s of interest to you, check page 2. Taking this approach to cooler testing allows us to analyze a cooler’s efficacy for more than just the GPU because, as we explained in our EVGA ICX review, GPU thermals are only part of the story. The modern, lowered power budget of GPU silicon means that it’s not as challenging to keep a GPU cool as it used to be, and this leads to lower fan RPMs (controlled via PWM from the GPU), resulting in warmer FETs. We test the whole solution.

Let’s start with just the GTX 1080 Ti, then add other cards.

With our thermal torture test and with the GTX 1080 Ti in completely stock settings, including the fan and clock speeds, we’re seeing the GPU temperature sitting at its limit – right around 84-85C. This is the GTX 1080 Ti’s clock limit point, where the clock will start to ramp down in order to better sustain its thermal target. We’ll look at clock fluctuations in a moment. 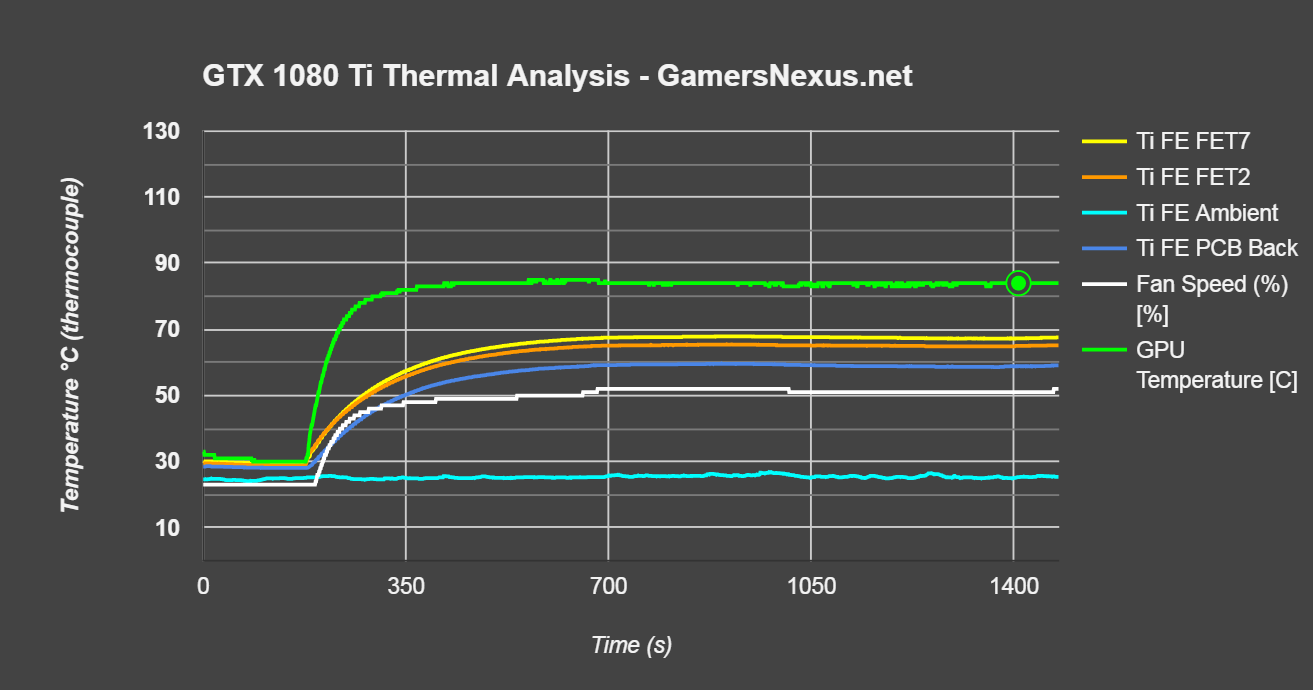 For now, we can see GPU temperatures in the 84-85C range, with the MOSFETs number 7 and 2 closely packed around 65-68C. This is heavily competitive to AIB partner FET temperatures, but the card is also only under stock clock loads. The GPU temperature, of course, looks dismal when compared to AIB partners. The card requires a significantly higher fan speed in order to sustain a comparable GPU temperature to AIB models, which then sacrifices noise output in a substantial way. To this end, despite using high quality materials, the cooler is not all that great for our audience. It’s a better fit for system integrators or specific needs users, but for most folks, we’re still recommending axial or liquid coolers. This begins choking the clock in a way which is unnecessary, and means the FE cooler doesn’t allow the card to get the most out of the components. That’s where AIB vendors come in, of course.

Anyway, to round out, we have a PCB backplate temperature of around 60C. Completely fine. We only measure this to ensure that the backplate doesn’t unnecessarily trap high amounts of heat against the PCB, as we’ve seen before. 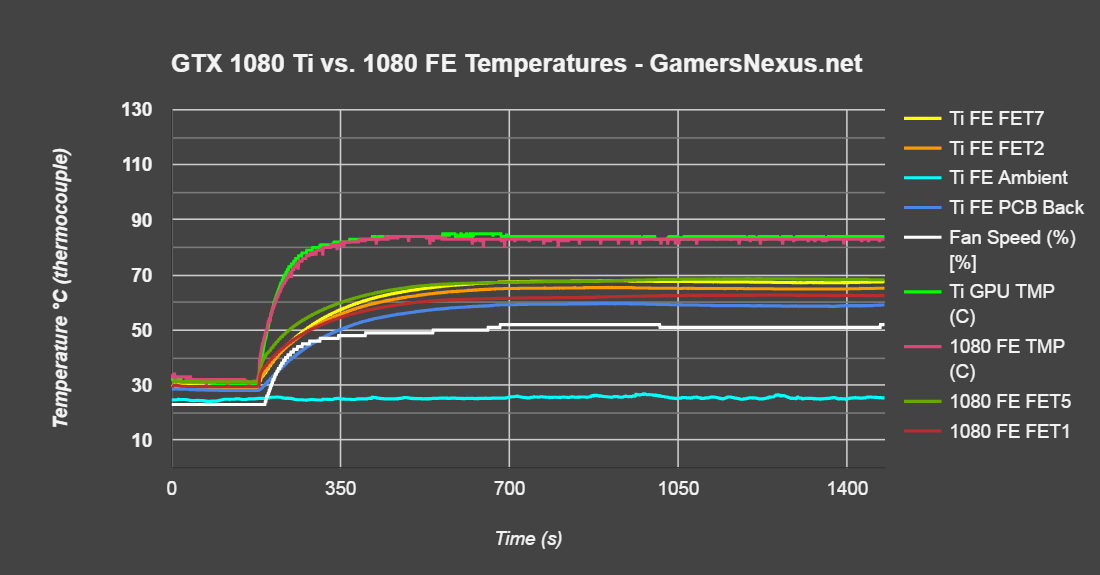 Here’s a comparison to the GTX 1080 FE, just for frame of reference to launching point for FE coolers. We’re seeing the GPU temperatures on each device locked to their max permissible limit when under stock settings, with the FET temperatures all within the same range. The GTX 1080 FE’s middle MOSFET does run about 1C warmer than the GTX 1080 Ti’s middle MOSFET, but the cards cool effectively identically when under a high stress workload. Also, this isn’t a perfect A/B comparison since we’re looking at a different VRM design and different FET placement, but gives a good look at hotspots.

What matters is the frequency throughput, of course, since they’re both boosting to a point of hitting thermal limits.

Looking at the clock-rate versus the temperature, we can reveal that the GTX 1080 Ti sustains a higher, more stable clock when forcing its fan to 80%. No big surprise. This enters territory of unbearable noise and is not representative of a real-world user scenario, but does show how the silicon behaves when temperature is no longer a concern.

The GPU frequency on the GTX 1080 Ti with auto fan speeds, or around 50% (~25C ambient +/- 1C), shows that we’re bouncing rapidly between about 1341MHz to about 1544MHz. By contrast, the 1080 Ti at a manual 80% fan speed posts frequency almost at a constant 1480MHz, with occasional spikes to around 1544MHz. Note that this is with a VRM power virus scenario, so we’re seeing higher thermals despite a lower clock overall. These clocks are not representative of video games, where you’ll see higher boost states. 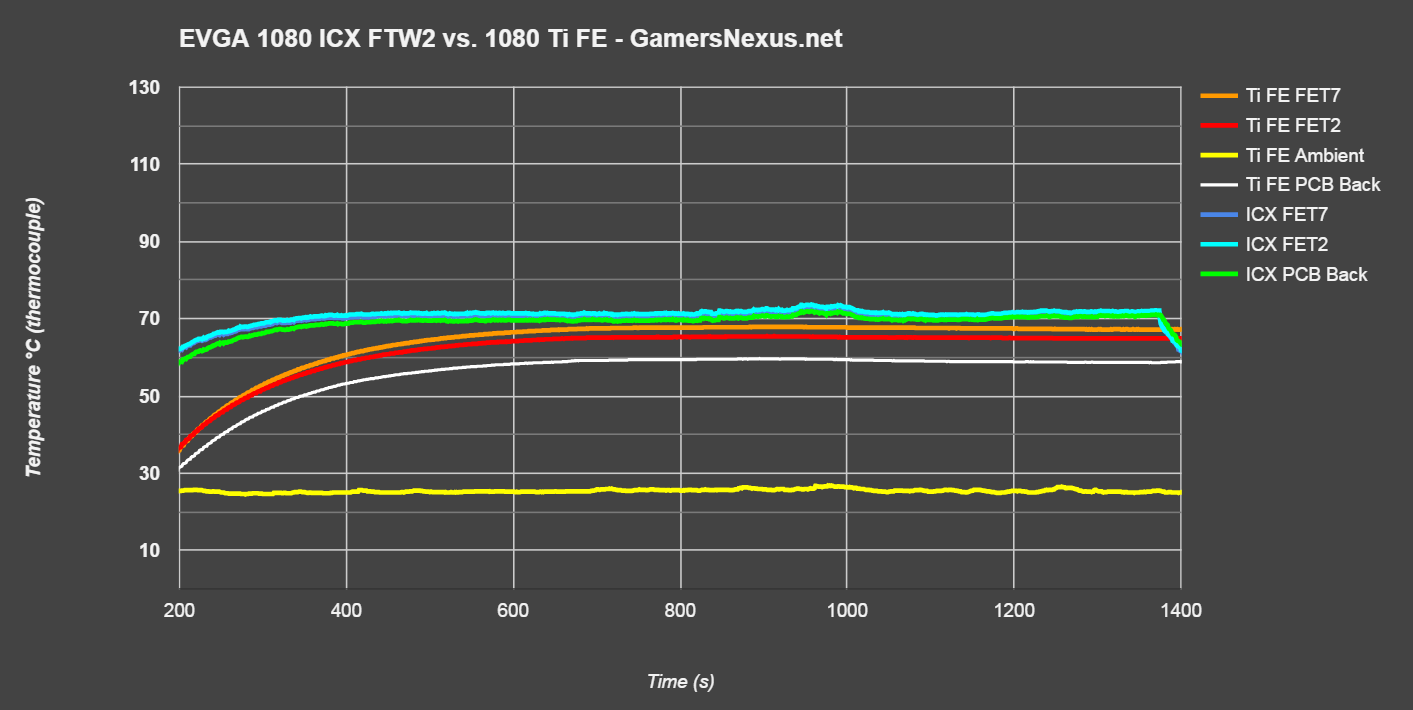 The above chart shows an ICX card on the same table as the Ti FE card, just for frame of reference. The FET temperatures, as explained, are pretty damn good on nVidia’s design. It’s just the GPU that isn’t exactly agreeable, as we’ll highlight here: 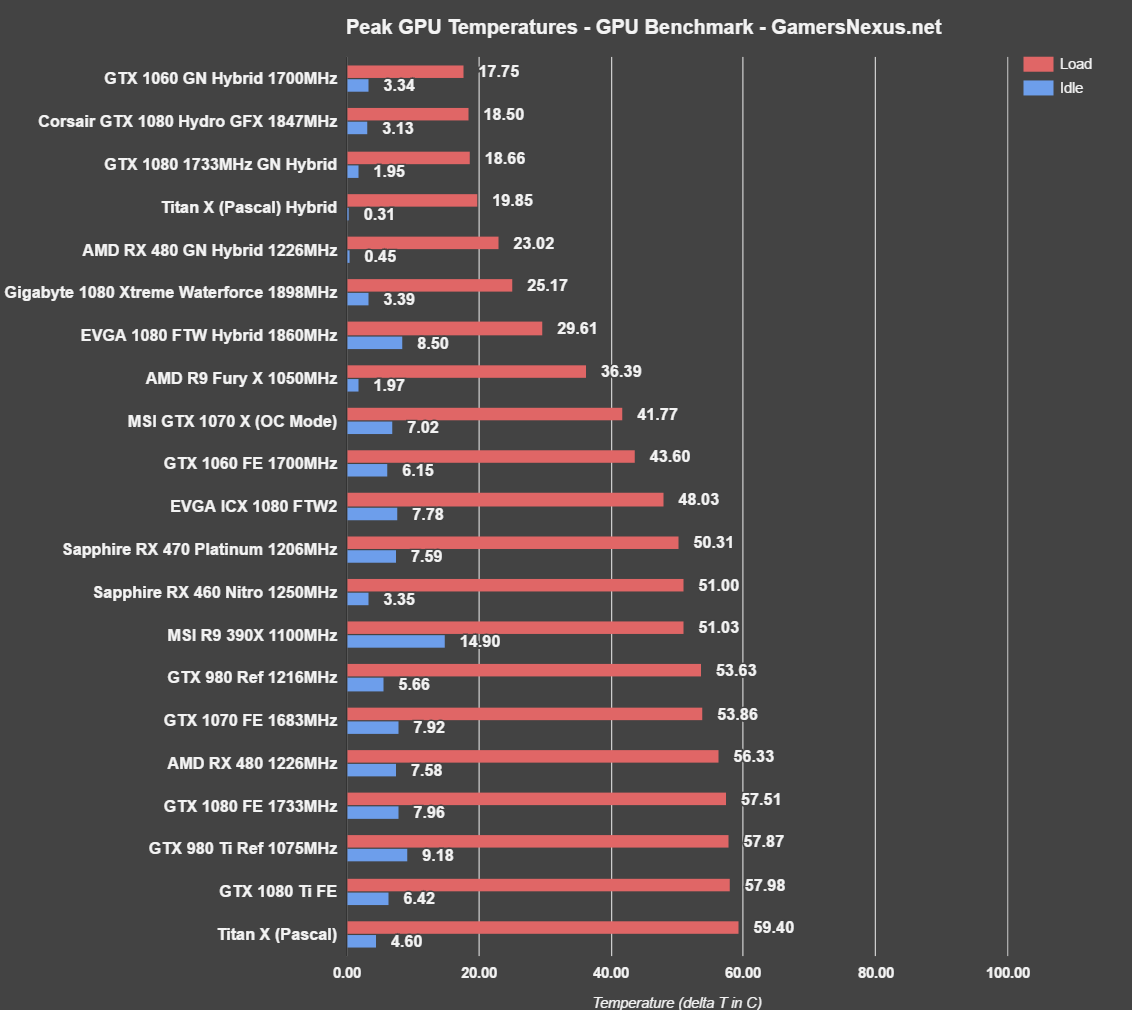 Just to stick one of our ancient charts back up here, here are the temperatures for the test when at steady state. The GTX 1080 Ti reference ends up around 58C delta T load for its steady state temperature when under torture workloads and with an auto fan, where the 1080 FE sits around 57.5C. That’s within our measurement variance, and so we must say that the 1080 Ti – alongside the 980 Ti – are effectively equal in thermal performance.

NVidia claimed 5C improvements with the 1080 Ti layout, but we can’t exactly validate that on the same PCB since we don’t have a means to fit both coolers on the same card. Changes in the FET layout and VRM design mean that we can’t do an apples-to-apples temperature comparison, but we can get fairly close.

If you’re curious about how an AIB partner board compares, our previous EVGA ICX review gives a good look at those numbers.

In general, though, you should expect the same high temperatures of all previous reference designs, and nVidia isn’t alone here – both major GPU vendors use radial fan designs. Using better cooling means quieter operation at higher frequencies, and unless you have a specific need for a reference board, we almost always recommend that you go with an AIB partner. Limitations can be removed from the native card by improving cooling, thus improving overall performance. Despite nVidia’s marketing presentation where CEO Jen-Hsun Huang showed a 2038MHz maximum clock-rate at temperatures below 85C, we have not been able to replicate that in our testing environment. That’s not to say it’s impossible, but we want to highlight that 2038MHz is not generally sustainable other than in short bursts, and that <80C temperatures at 100% load are going to require louder fan RPMs than likely desirable.

If you do need a reference board for liquid blocks, consider waiting for the board vendors to ship their stripped down versions with disposable, plastic coolers. Those might be a bit cheaper at some point, considering usual rebates.