Memory overclocking and timings tuning isn’t necessarily trivial on Ryzen right now. It’s mostly time intensive, and if you’re used to just toggling an XMP switch on Intel and moving the frequency around, this is going to be a lot more involved.

After sorting through about 6 kits of memory, we found that our Trident Z 3200MHz CL14 kit had the best potential for overclocking in Ryzen. This is because it’s got Samsung B dies, whereas other kits – like those from HyperX – are running the Hynix dies that are proven to have issues with higher clocks on Ryzen.

We have since requested an even higher bin of memory from GSkill, and are awaiting that shipment. For now, our Trident Z B-die kit will work for establishing a premise of how much improvement we can expect from memory overclocking on Ryzen.

Thanks to EFI updates, direct support from Buildzoid and ASUS, and support from GSkill, we were able to walk through about 6 hours of memory training and tuning to establish a stable overclock of 3466MHz with CL14 timings. We were able to hit 3600MHz, but it was not stable for actual load usage with beneficial timings.

Our previous results (2933MHz) used the Corsair Vengeance LPX kit at CL16. Improvement to performance is from lower CL timings as much as it is from higher frequency – so far, we’ve seen that Ryzen cares about both.

A lot of the tuning is figuring out whether your R7 chip responds better to reference clock tuning or memory multiplier tuning, then figuring out if you want to operate from a base 24x, 26.66x, or 32x multiplier on the memory. This is mostly guess and check work and takes the majority of the time required. Working on that for a day gave us stability and timings we were happy with benchmarking.

We’re using the 1700X for this, since all of those tests were conducted most recently and were conducted on 2933MHz base. Note that we don’t particularly recommend the 1700X, given the deal that is the R7 1700 by comparison when overclocking, but we’re using it because it’ll allow for the most linear presentation of data. 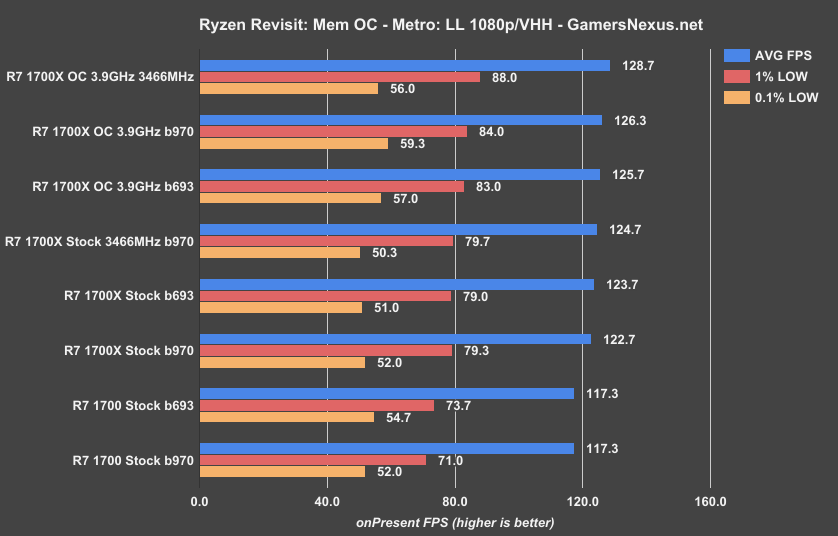 Starting again with Metro: Last Light, the 3466MHz 1700X with stock clocks sees a performance bump from 123FPS to 125FPS AVG, with lows effectively identical around 80FPS 1% and around 51FPS 0.1%. That’s an improvement of about 1.6% by going from 2933MHz to 3466MHz with the Windows update and EFI update included.

We might as well add these in to the original tables. Note that the Intel series and the 1800X haven’t been retested with the new updates, so anything which impacts Ryzen could theoretically also impact Intel (on the Windows or game update side). The same goes for memory: We haven’t done a memory OC effort on KBL yet, which would be necessary to better determine the max potential of each platform. 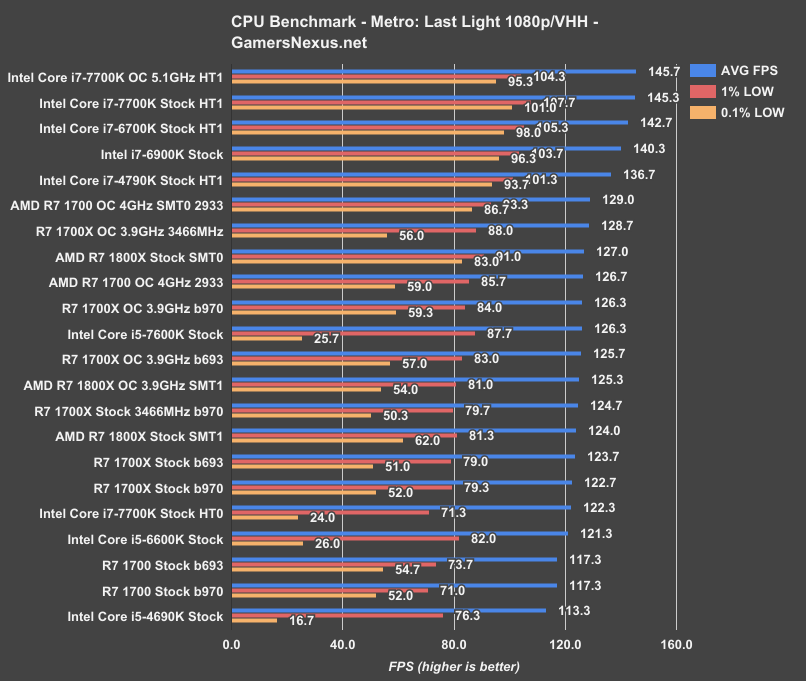 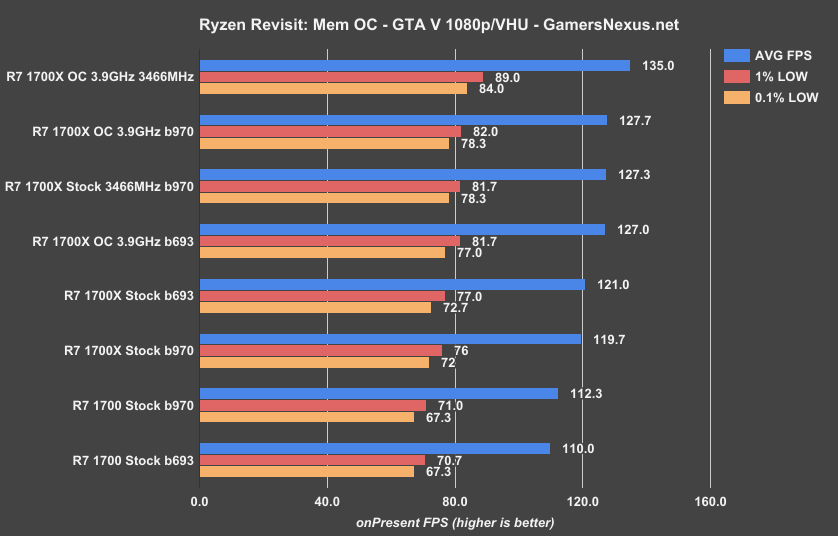 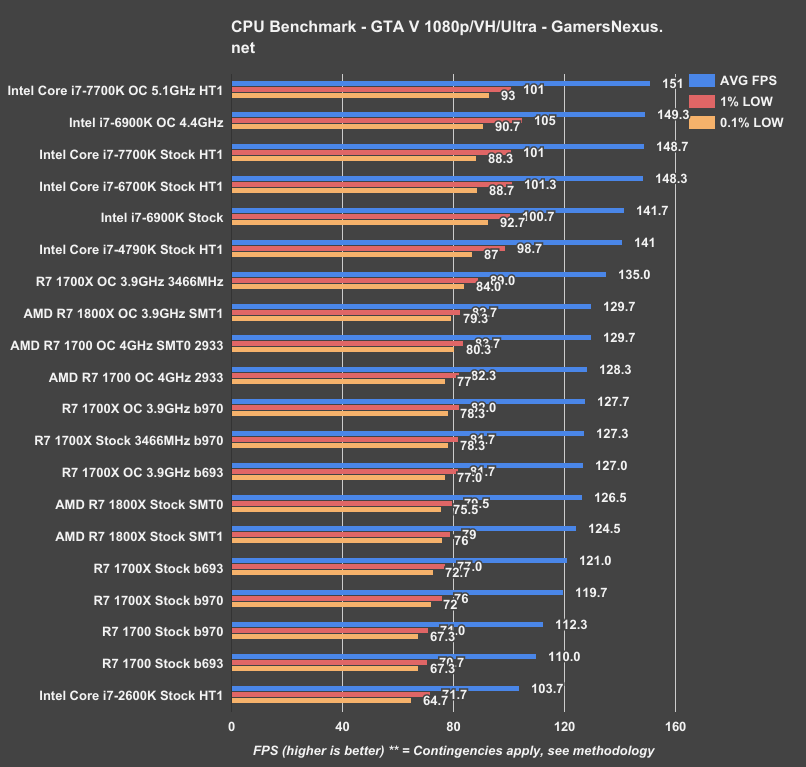 The overclocked i7-7700K is next to be compared to the overclocked 1700X. The 7700K is similar in price to the 1700 and, for pure gaming builds, should be alongside the 1700 for head-to-head options. Keep in mind that the 1700 can support the same overclock and memory overclock as our compared 1700X, chance notwithstanding, which means performance is identical at the same clocks. The 7700K overclocked is at 151FPS AVG with 101 and 93FPS lows. The 7700K still holds a performance lead of about 11.9%, which is down from its previous performance lead of 18.9%. That said, we have not yet retested the 7700K with build 970 of Windows 10 or with memory overclocking of its own. The 7700K here is at 3200MHz CL16. 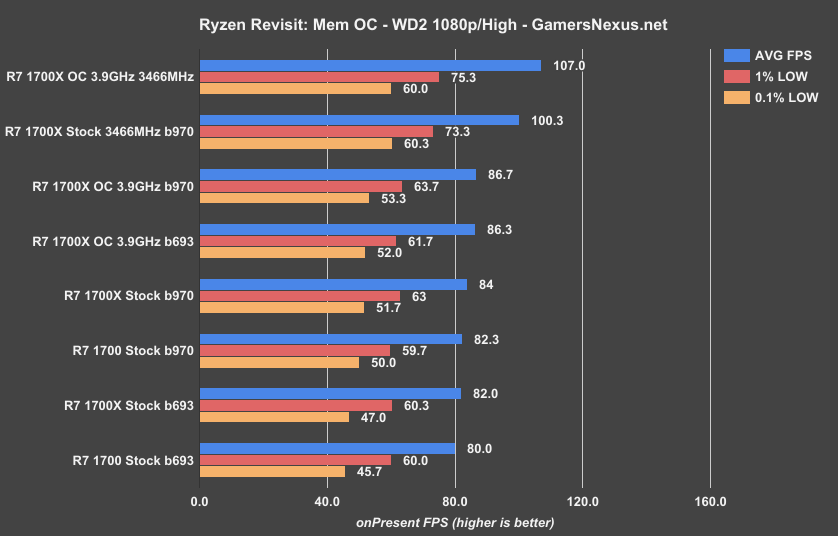 In Watch Dogs 2, the 1700X overclocked to 3466MHz CL14 with its stock CPU speed places at 100FPS AVG, lows in the 70s and 60s. Versus the 1700X stock with 2933MHz memory, this is a significant improvement of 19%. So far, all of our improvements in this same comparison have been in single digit percentages, making Watch Dogs 2 a bit of an interesting title. We also know that Watch Dogs 2 is particularly thread intensive, unlike the others, and so could be causing some sort of cross-CCX traffic that benefits from the faster memory. 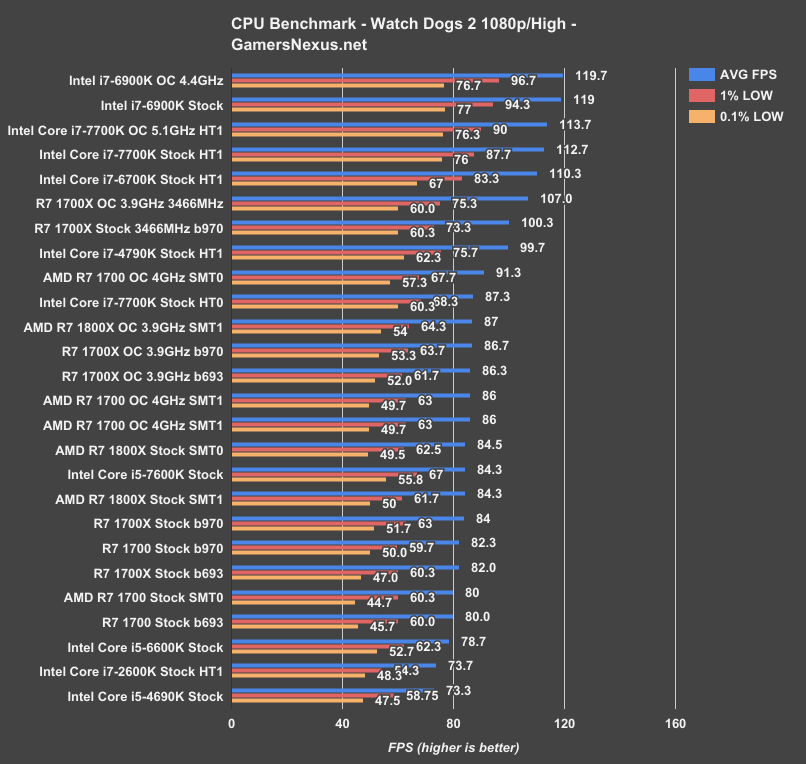 Again, we’d also have to overclock Intel’s memory for final validation of this title, but this gives an idea as to Ryzen’s memory overclocking performance. 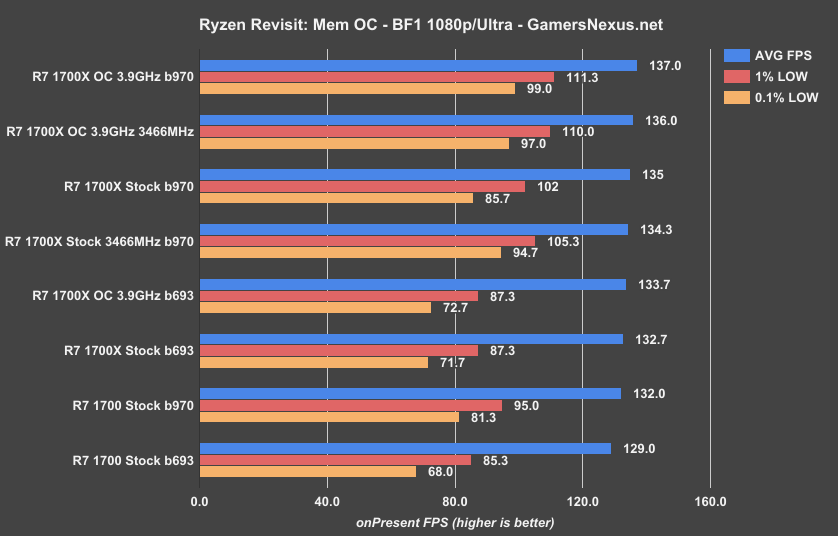 Back to Battlefield 1, it appears that the most important item is the b970 Windows update and/or update to BF1 since previous testing, after which point overclocking becomes less significant. The 1700X with its 3.9GHz OC and 3466MHz memory posted no significant statistical difference versus the 1700X at 3.9GHz with 2933MHz memory. The difference here is effectively 0%. Battlefield 1, like Watch Dogs 2, has its own unique performance needs. 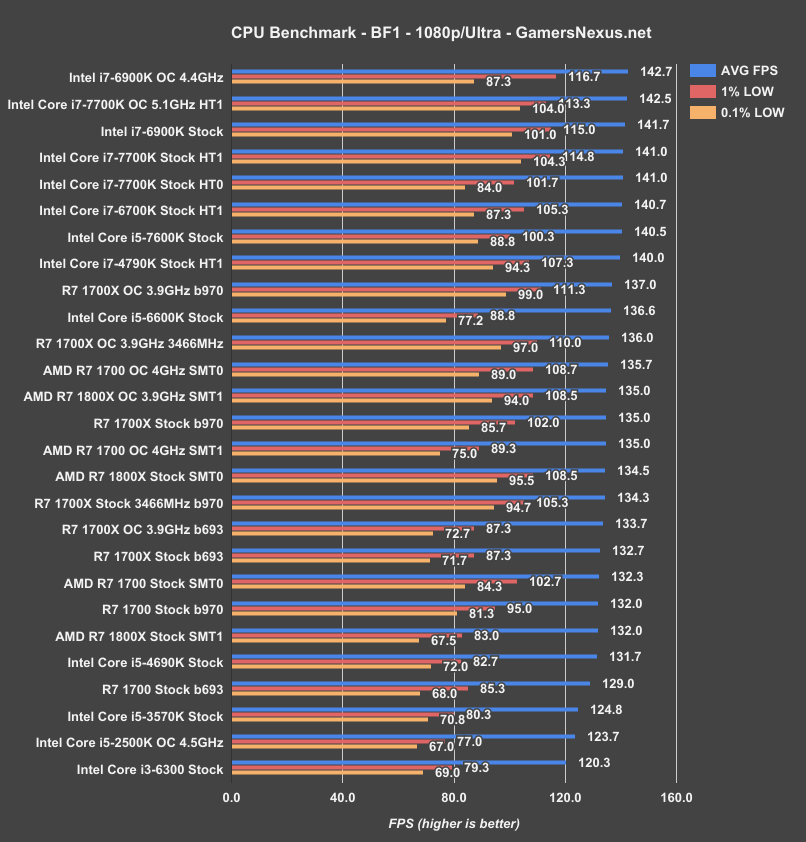 Looking at the stock 1700X versus the stock 1700X at 3466MHz memory, we also see an effectively equal average framemrate, albeit with improvements to the 0.1% low metrics from 86 to 95FPS.

Again, we haven’t updated Ashes yet. That’s not the point of these tests.

Ashes appears to care about the memory overclock more than the core overclock, in this test configuration. The 1700X at 3.9GHz with 3466MHz memory places at about 41FPS AVG, just ahead of the 39FPS AVG of the stock 1700X with 3466MHz memory. The latter of the two, with its 39FPS AVG, posts an improvement over the stock 1700X with 2933MHz memory of 18.8% versus our best-of b693 metrics. This is another title that seems to make use of the gains. 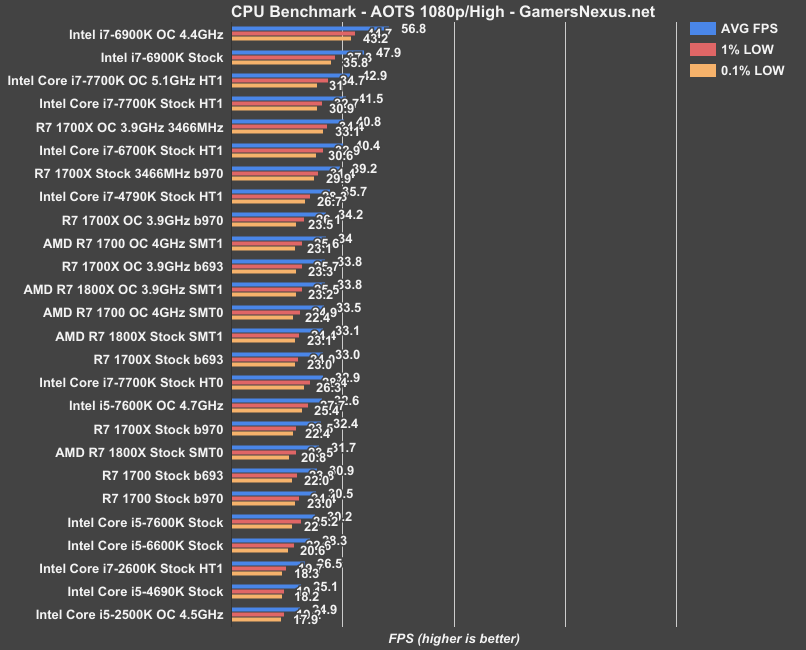 Also again, we haven’t rerun Intel yet or overclocked its memory, so mileage may vary until we get those results in. Comparatively, the 1700X is now price-competitive with the 7700K in this title, as the 7700K is running a 43FPS AVG with its core overclock, or 42 without. We are curious to see if a MemOC benefits Kaby Lake in this particular game, but for now, the 1700X with all our overclocking effort is starting to claw back some ground. 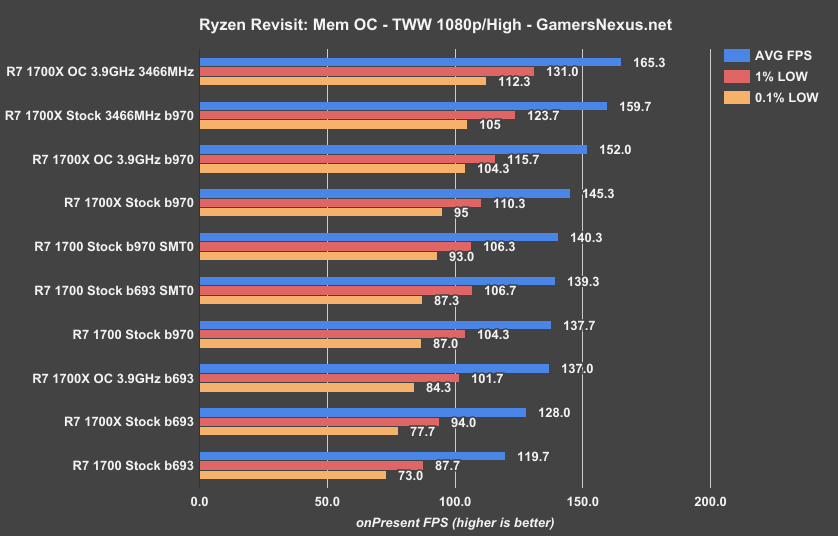 Finally, we have Total War: Warhammer. Again, keep in mind that this game just received a patch and we haven’t yet rerun the other tests. The Ryzen CPUs listed in this benchmark include the update, but not the later-listed Intel/FX/1800X CPUs, for clarity. 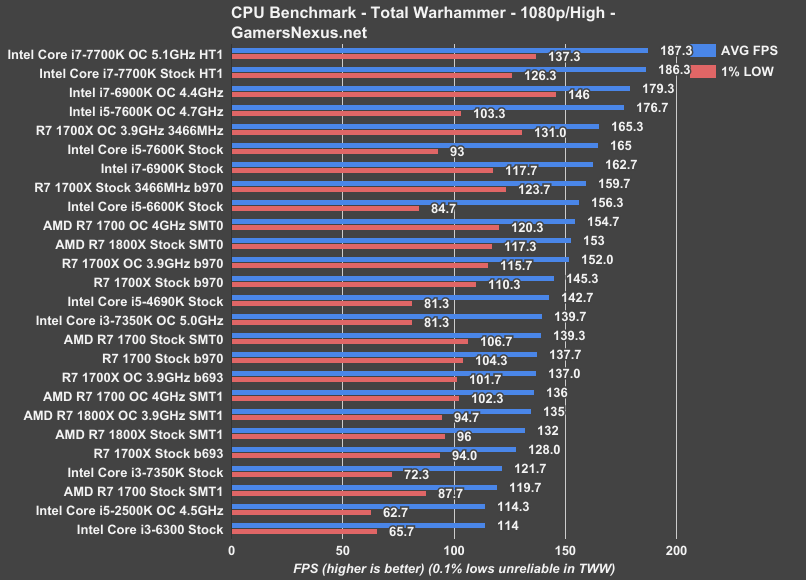 Versus other items on the chart, the i7-7700K overclocked lands at 187FPS AVG, with the stock 7700K at 186FPS AVG. We are bumping up against other limits here (either engine constraints or non-CPU hardware constraints, as indicated by the 7600K + OC deltas), given the proximity of performance between these two line items. The overclocked i5-7600K runs at 177FPS AVG with poorer frametimes compared to the 7700K, more similar to the stock 1700X. In its best light with all the overclocks, the 1700X lands AMD ahead of the 6600K and behind the 7600K in averages, though lows are ahead at 112.

There’s a lot more to do, as always, but we’ll leave this here for now. We are currently sorting through still higher overclock options, thermal testing, and R5 chips. After the overclocking effort, we had to keep the Kraken X62 cooler on there to ensure the 1700X didn’t encounter thermal throttles for longer tests, which we showed to be a possibility in our previous review. More on thermals soon, though. For now, we’ve got the FPS numbers updated for you to sift through, as seen in this content.