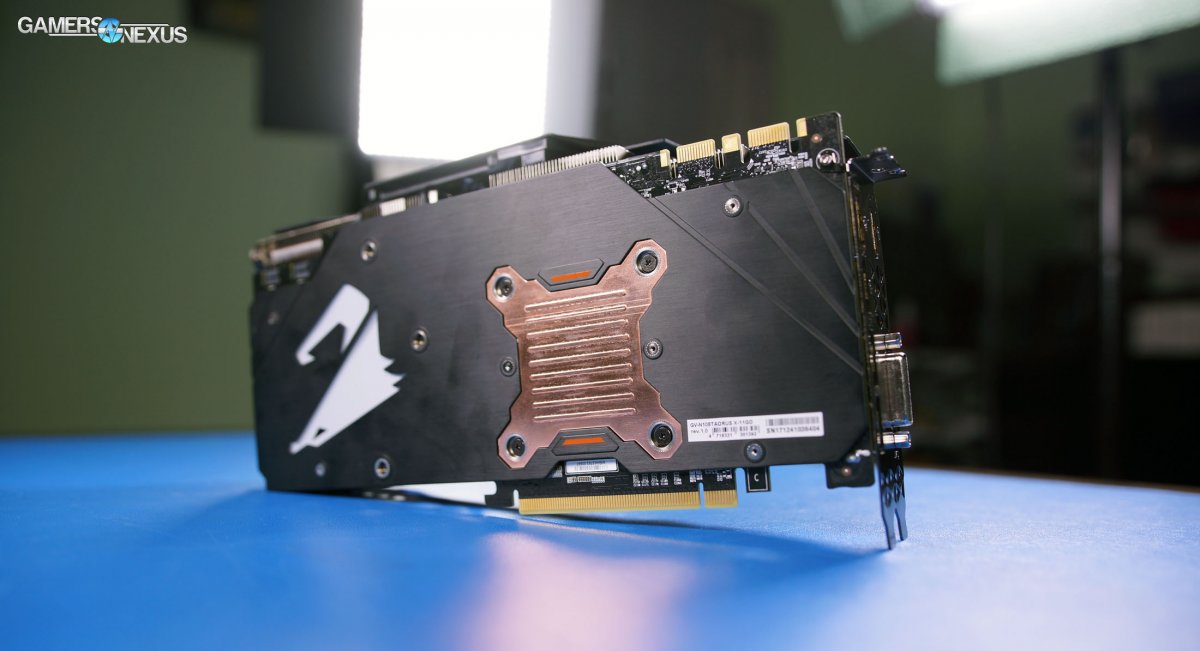 Our first temperature chart covers frequency vs. temperature & time, plotting time on the x-axis, temperature on the left axis, and frequency on the right axis. Note that frequency is lower in these tests than gaming scenarios, as we're generating a power virus load on the GPU to strain it heavily.

What we're looking for is a flat frequency line. We're getting close -- the range of fluctuation is less than 100MHz, this time, without approaching any thermal constraints on the card. The biggest constraint is going to be power and voltage, as tends to be the case for AIB partner Pascal cards. Fan speed levels off around 60% and stays there for the remainder of the test, which is also around where fan speed sits during gaming workloads. 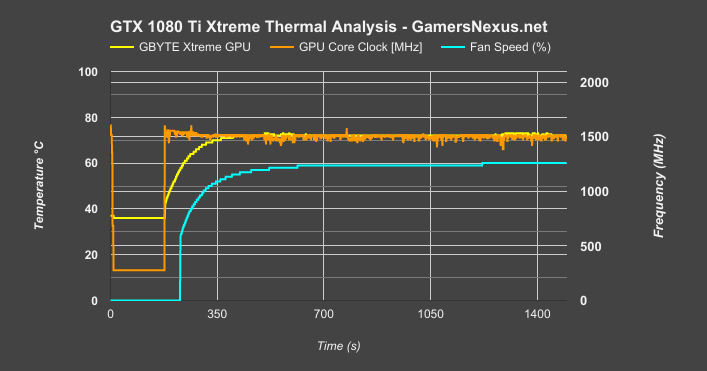 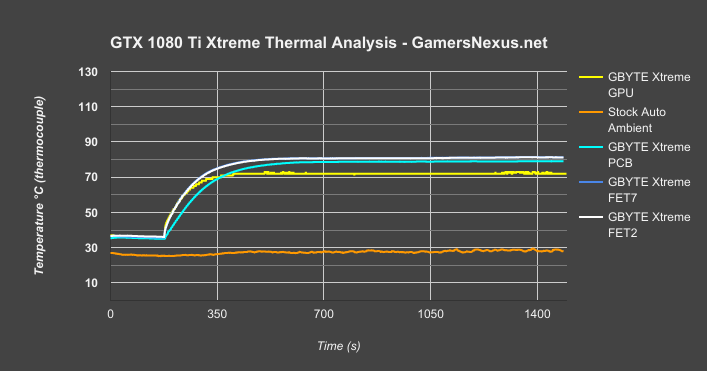 This test plots temperature of critical board components against some other cards. We’re looking at the Gigabyte GTX 1080 Ti Xtreme versus the MSI GTX 1080 Ti Gaming X; for those who missed our Gaming X review, the MSI card had similar FET and PCB temperatures to the Founders Edition card (review here). This can serve as something of a stand-in for those numbers. It’ll also simplify the charts. The FE card, naturally, has a much higher GPU temperature of about 84C when under auto conditions. 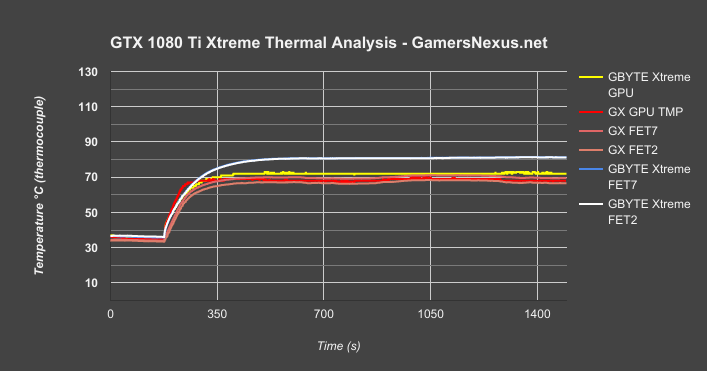 With these two cards, the Gigabyte Xtreme GPU diode temperature runs at about 70-72C, with the MSI Gaming X GPU temperature at around 68C. FET temperatures place the MSI card at around 70C for FET7 and around 67C for FET2. The Gigabyte card runs a hotter VRM, with its FETs around 82C. That said, these VRMs are both well within any reasonable operating range. You’re not going to get derating at 82C on the Gigabyte card – we’re so far away from a 125C threshold that it’s fair to say both cards are doing their job well, considering Gigabyte and MSI use different driver ICs and FETs to begin with. They’re not necessarily linearly comparable, since the overall VRM solution is different in addition to the cooling differences.

This next part of the thermal testing is the most interesting, we think. We’ve previously done backplate A/B testing with entire backplates, and have found that they occasionally work – like on EVGA’s FTW and FTW2 cards – but most often just provide structural support, with no real benefit outside of that. In some cases, like EVGA’s first FTW card, there could even be trapped heat.

But this card is different. Rather than just test the backplate in an A/B scenario, we decided to specifically benchmark the copper plate on the back of the PCB while leaving the rest of the backplate attached. We ran these tests a few different ways: First, we used our standard bench with only light airflow over the back of the card (1x 120mm fan at ~10” away). Next, we ran the tests with a 120mm case fan mounted an inch away from the backplate on an open air bench, providing very direct airflow to the copper plate. We thought this to be a necessary test, as any conducting heatsink will require dissipation in order to function properly. That requires a new set of A/B tests with and without the case, since we’ve changed the airflow dynamic. This is something of an ideal scenario.

For all these tests, we tested using the GPU fan speed manually configured to 60%. This is the most common fan speed that this card reaches in real gaming scenarios, and so we chose it for our benchmarks. All the thermocouples and diodes are allowed to reach a steady state prior to proceeding. We are logging ambient second-to-second as well, then creating delta values. This allows us to largely rid of the 1-2C uncertainty caused by normal fluctuations in ambient.

These are the tests with the backplate on.

Starting the A/B tests with just one case fan positioned about 10” away from the GPU backside, with the usual sticks of RAM in between the fan and the card, we see the chart above. These numbers are with the backplate on the card. We’ve cropped the temperature scale in to 0-60C, as it will help better show deviation in the numbers. All values are delta T; we are accounting for ambient in these measurements.

As shown here, we’re seeing that the 1080 Ti Xtreme runs its FET7 and FET2 temperatures nearly identically – they’ve built a very consistent VRM across the entire board – both at roughly 53C delta T when under the power virus load. The PCB backside temperature, with the probe affixed behind the FETs and inductors, measures at around 49-50C delta T load. The GPU diode temperature is bouncing around near 43-45C delta T.

What you’re looking at is a whole bunch of lines on top of each other. Fortunately, they happen to be sectioned in an easy-to-follow fashion once reading through the data.

The top pairing of lines is for the FETs. There are actually four lines here, but they’re all covering each other. FET2 and FET7 with the backplate on and off are effectively identical in performance. We cannot confidently state that there is a significant difference between these numbers. The copper plate does not impact FET temperatures.

We can next look at PCB backside temperatures – these, you’d think, may be more affected given that the plate is conducting heat away from the back of the PCB, and therefore out of a potential hotbox scenario caused by the backplate.

No difference here, either. The two lines show that the PCB backside temperature is effectively identical with and without the plate.

Let’s highlight the last two lines. These are for the GPU diode temperature. Again, this is a delta T reading. There is no significant difference here, and our confidence interval is not tight enough to declare a potential 0.5C advantage. We’ve got about a 1C range of confidence. These numbers are effectively identical.

Looking at the 200 to 350 second mark vertically, we can see that the plate does not even impact the ramp-up time of temperatures. The temperatures increase at the same pace regardless of its presence, and because our test is automated, we can see this quite clearly.

But there’s a chance that we need better airflow over the copper insert to really see a benefit, so we also ran those tests.

Here’s the chart with the backplate on. We now have a fan directly pointed at the plate. Temperatures overall are slightly better on the backplate diode than in our previous test, which shows that the extra airflow is getting down the backside of the card.

Removing the backplate, we can now add in the rest of the lines. FETs 2 and 7 in both the A and B test are nearly identical, once again. FET7 with the plate off is slightly advantaged, though we’re not confident enough to state if that’s because additional air is getting into the backplate. That could be the case, since FET7 is also in the exact spot where there is no thermal pad coverage to the backplate, since the LED tape is there instead. This stated, the difference is hardly more than 1C, so we can’t confidently confirm a meaningful difference.

The PCB backside temperatures are also effectively identical, even with the help of the direct airflow.

GPU diode temperatures are not meaningfully different, either.

Based on our testing, it does not appear that Gigabyte’s copper insert is aiding with temperatures in any way whatsoever. That said, it’s probably conducting some of the heat away from the caps on the back-side of the GPU, and you’d be able to measure that by sticking a thermocouple to the caps – it just so happens that this is completely irrelevant. That doesn’t impact actual GPU temperatures. That’s not an area that needs conduction and dissipation to cool. It won’t run that hot, and the copper/fiberglass PCB mixture doesn’t much care what temperature it is. There’s no advantage in any temperatures that matter.

This is a marketing stunt. It may cool those four caps, but that’s not going to matter for anyone. It certainly doesn’t impact the GPU or VRM in a meaningful way; at least, not at the default fan speed of 60% when under load. There might be more of a difference at lower fan speeds, it’s just not going to be a relevant one if so. This is doubly the case since the card tends to run at 60% during any gaming scenarios.

MSI's Gaming X ($750) tends to auto at around 55% when under an equivalent load to the Xtreme card, which keeps its auto around 60% (with the installed fan curve). Out of box, that makes MSI a bit quieter under auto -- ~2dBA total -- but not necessarily in an appreciable fashion (we generally can’t notice until the difference is >3dBA). 50% fan speed keeps the two cards mostly tied, as is their GPU diode temperature. Gigabyte stays a bit quieter at 100% fan speed, though you should really never be spinning this fast, anyway, as it’s entirely unbearable and an unrealistic scenario.

Versus the FE card, either the MSI or Gigabyte solutions would be a substantial upgrade.

Continue to Page 4 for synthetic tests.