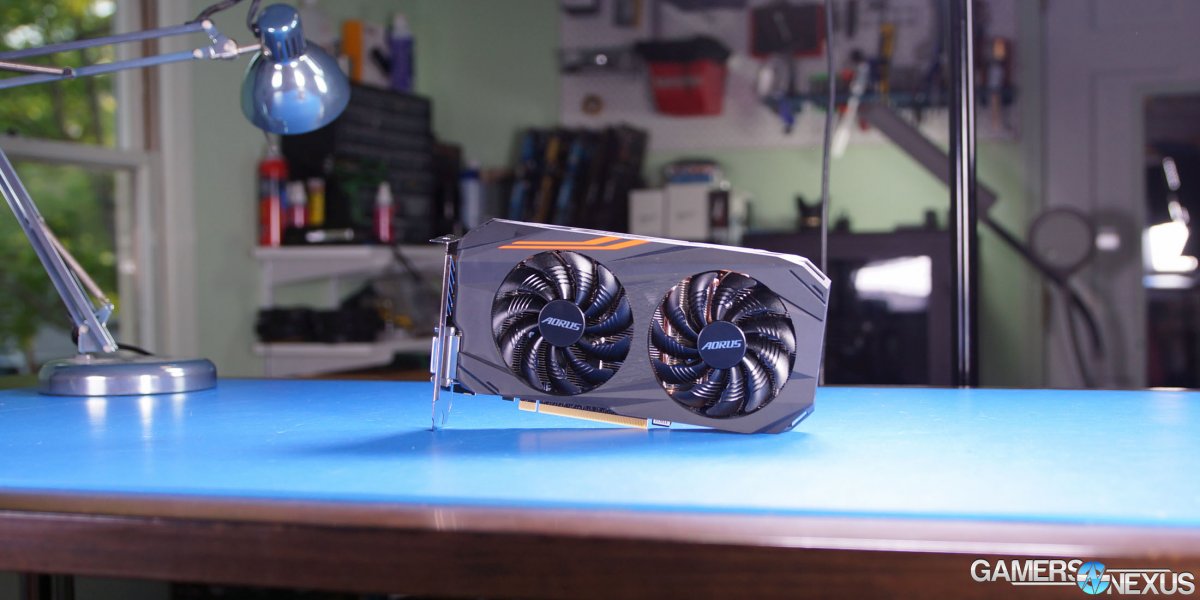 Time to move on to game benchmarks. Most of these will be at 1080p, though we did run several of the tests at 1440p just out of curiosity.

Before getting into the tests, let’s look at the OC stepping table. We ended up with a stable 1400MHz clock for some initial burn-in, but had to drop to 1390MHz to sustain a stable run through most the games. DOOM was a special case, where we had to drop clocks all the way down to 1350MHz to keep stable. The other games were run at 1390MHz. 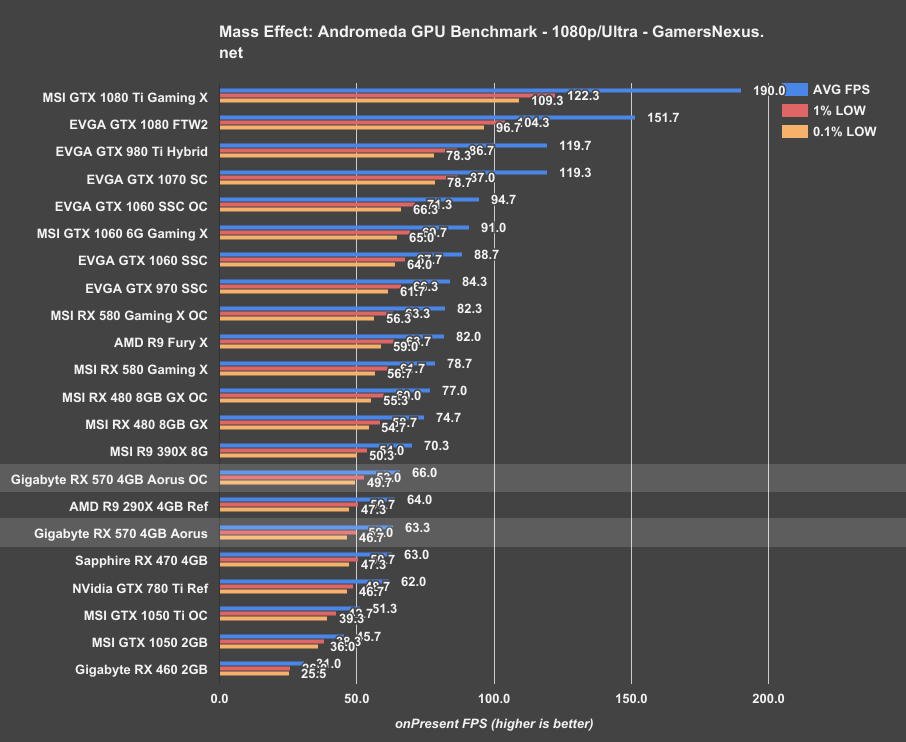 Overclocking the RX 570 gets us an improvement of about 4.3% over the stock card.

Considering that we’re off to effectively equal performance to an RX 470 in this particular game, the 570 isn’t impressive given the relative power draw increase of 25-28%. Let’s look at another title where there’s more room to improve. 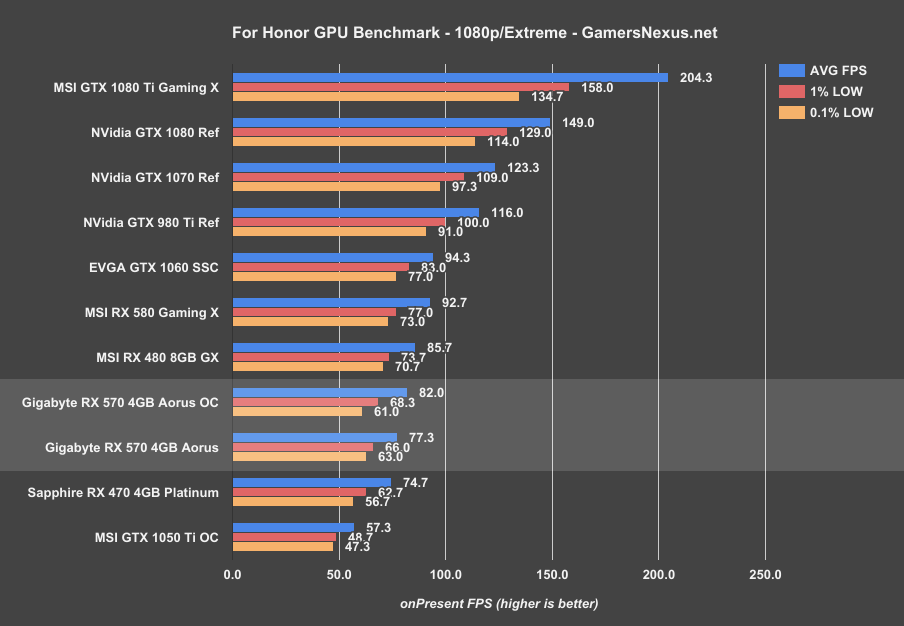 Looking now at For Honor, the RX 570 Aorus card runs at around 77FPS AVG, placing it roughly 3.5% ahead of the RX 470 4GB card and about 35% ahead of the $140 GTX 1050 Ti – in other words, the 1050 Ti is still oddly positioned, just as it has been since our initial review. We were able to get an actually stable overclock on the Aorus 570 for once with this game, but had to drop our max stable OC by about 10MHz to stop obliterating the frametime variance numbers. Overclocking landed us about 6% ahead of the stock 570, with only a slight performance detriment to 1% low and 0.1% low values after fine-tuning. 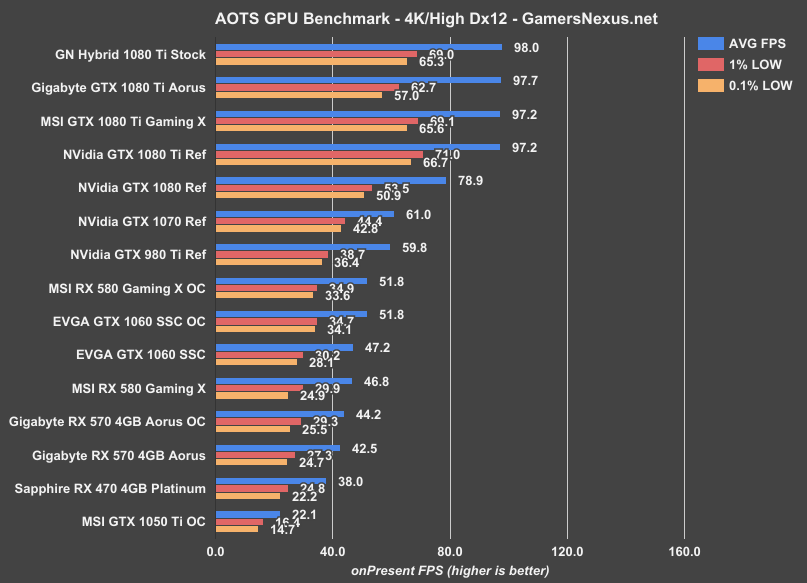 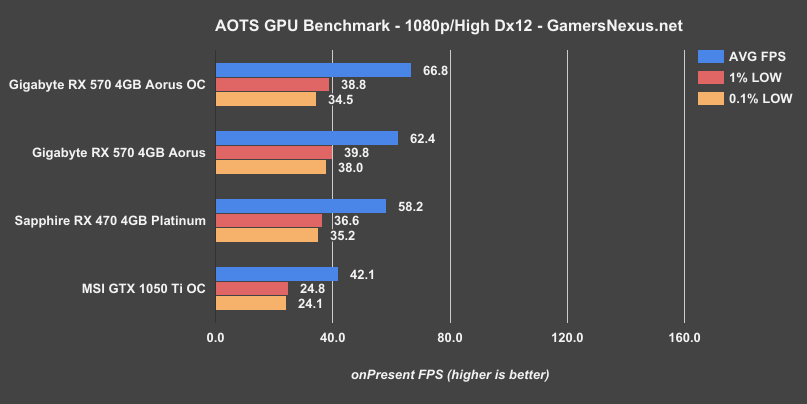 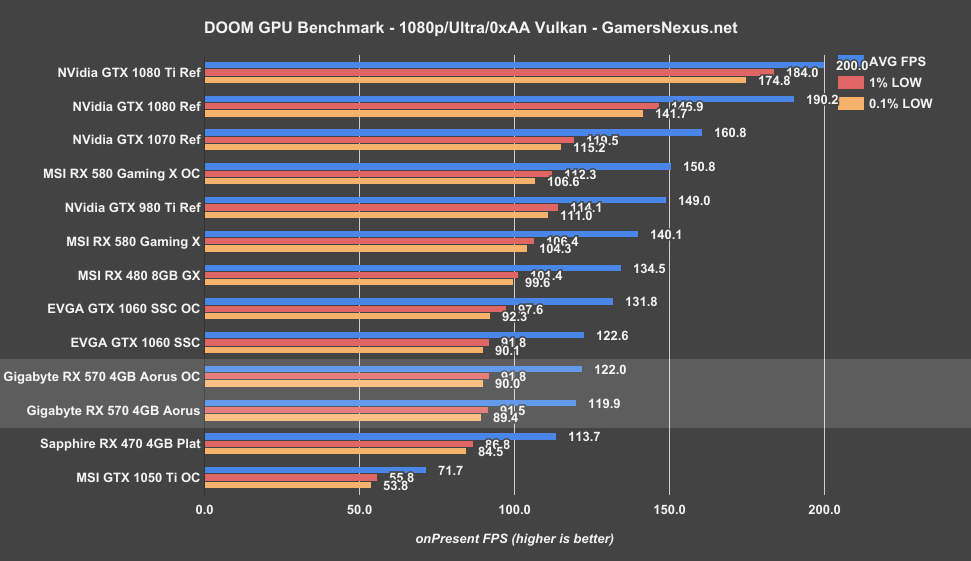 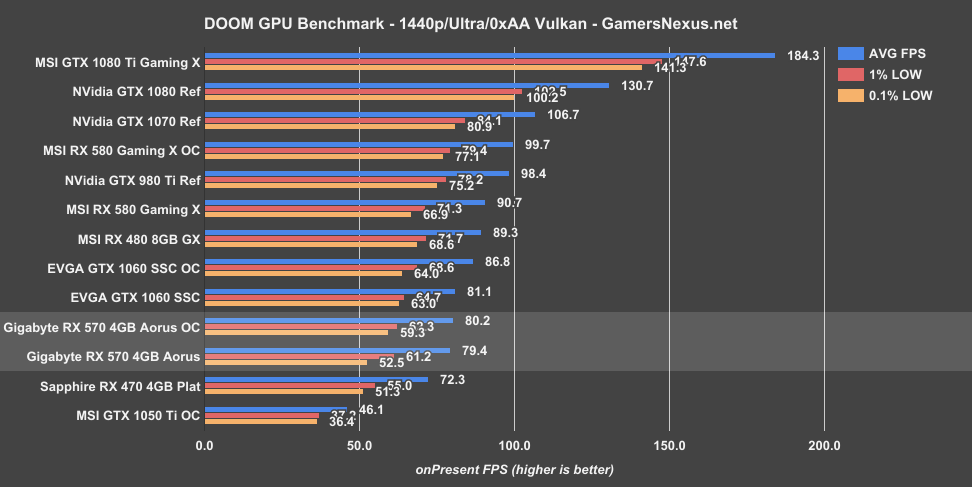 DOOM can be run at 1440p just as easily with all these cards.

Ghost Recon: Wildlands at 1080p with Very High settings gets a little hard for the RX 570 and 470 to run, but we also ran tests at Medium as part of a new low-end test suite. 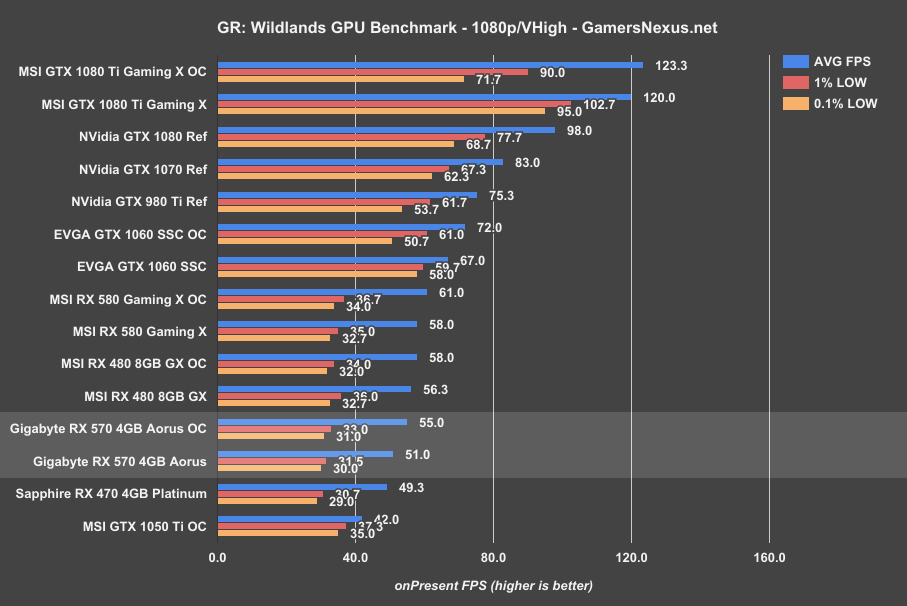 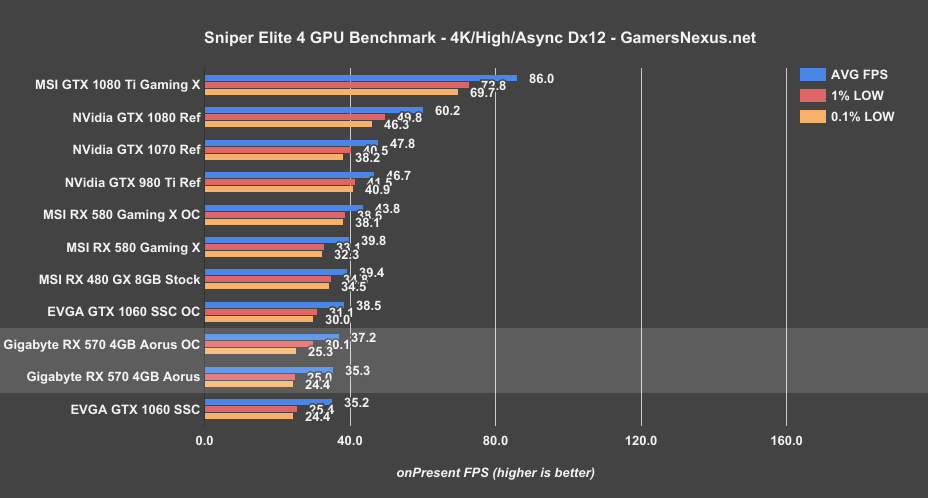 Sniper Elite is our last game for the charts in the video, though you can find 3DMark and Ashes of the Singularity in the article linked below. Just like Ghost Recon, we’ve had to expand our Sniper Elite testing to include 1080p resolutions – we were originally only benching at 4K for the 1080 Ti launch, but have just begun building 1080p results.

The RX 570 runs this particular bench at around 35FPS AVG stock, or about 37FPS with the overclock. That puts it around the same levels of performance as the GTX 1060 SSC pre-OC, which was previously outmatched somewhat handily by the RX 580 Gaming X, operating at around 40FPS AVG. 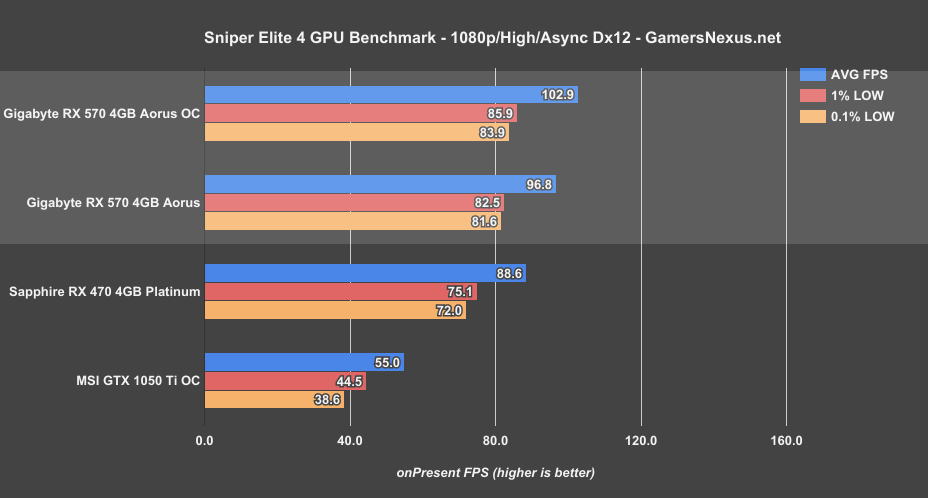 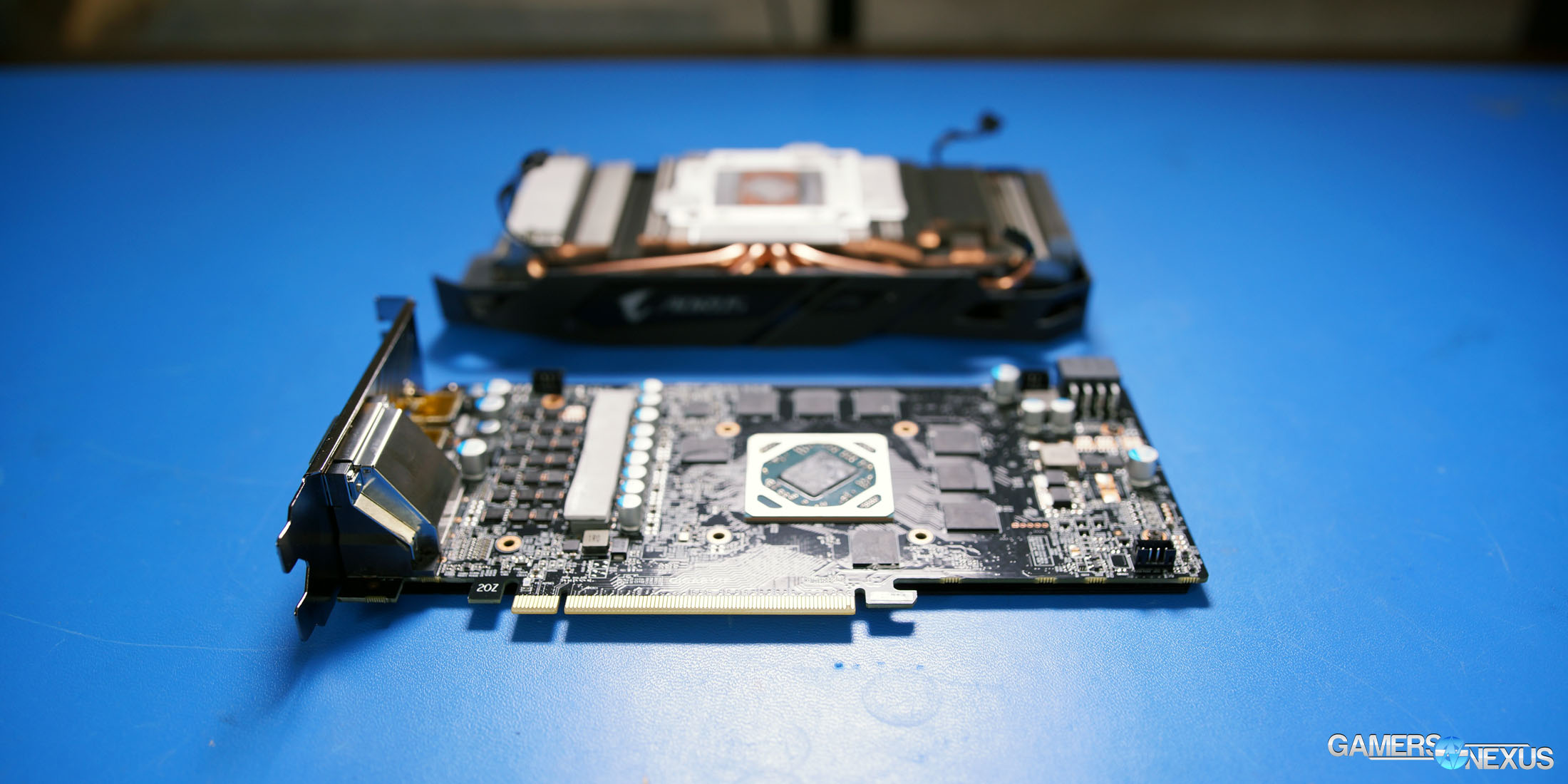 The particular RX 570 model we reviewed – that’d be the Gigabyte RX 570 Aorus at $180 – did not necessarily impress versus the RX 470. Gains in FPS were anywhere from ~3% to 9% (in a single scenario), while gains in load power consumption were 25-28% in similar gaming tests. The power tradeoff for a few percentage points of improvement in framerate – if that – just doesn’t feel worth it. That stated, the RX 470 (and therefore RX 570) is still a better buy at the ~$180 price-point than most of the GTX 1050 Ti cards, particularly those in the $165 price bracket.