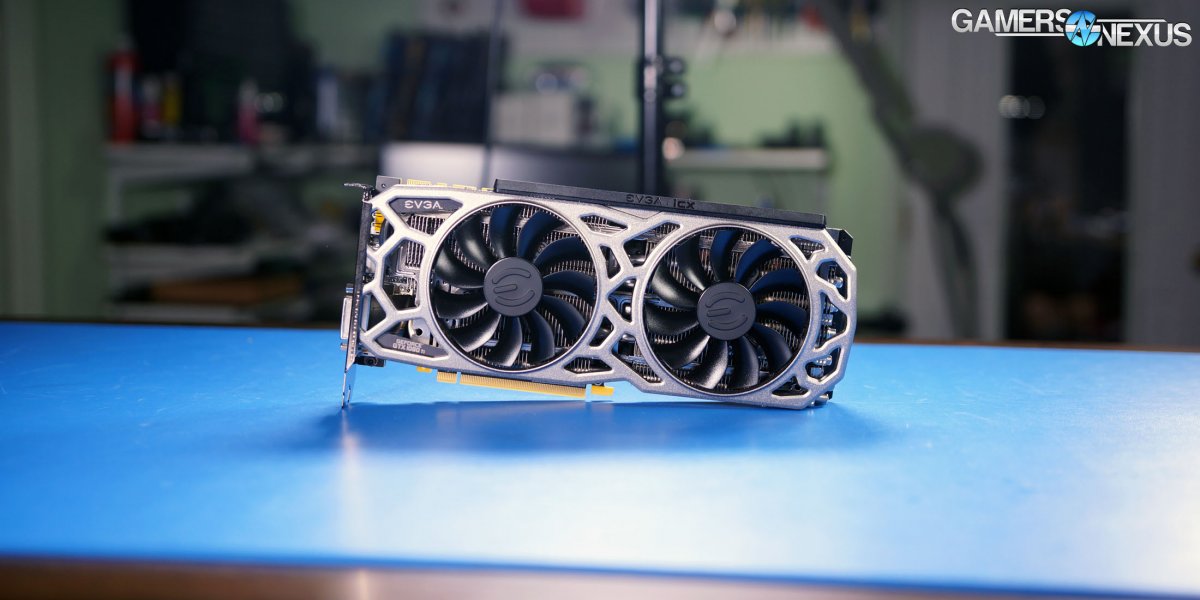 EVGA’s GTX 1080 Ti SC2 ($720) card uses the same ICX cooler that we reviewed back in February, where we intensely detailed how the new solution works (including information on the negative type thermistors and accuracy validation of those sensors). To get caught-up on ICX, we’d strongly recommend reading the first page of that review, and then maybe checking the thermal analysis for A/B testing versus ACX in an identical environment. As a fun add, we’re also A/B testing the faceplate – it’s got all those holes in it, so we thought we’d close them off and see if they actually help with cooling.

The fast version is basically this: EVGA, responding to concerns about ACX last year, decided to fully reinvent its flagship cooler to better monitor and cool power components in addition to the GPU component. The company did this by introducing NTC thermistors to its PCB, used for measuring GPU backside temperature (rather useless in a vacuum, but more of a validation thing when considering last year’s backplate testing), memory temperature, and power component temperature. There are thermistors placed adjacent to 5 MOSFETs, 3 memory modules, and the GPU backside. The thermistors are not embedded in the package, but placed close enough to get an accurate reading for thermals in each potential hotspot. We previously validated these thermistors versus our own thermocouples, finding that EVGA’s readings were accurate to reality.

Although this is absolutely a unique, innovative approach to GPU cooling – no one else does it, after all – we found its usefulness to primarily be relegated to noise output. After all, a dual-fan ACX cooler was already enough to keep the GPU cool (and FETs, with the help of some thermal pads), and ICX is still a dual-fan cooler. The ICX sensors primarily add a toy for enthusiasts to play with, as it won’t improve gaming performance in any meaningful way, though those enthusiasts could benefit from fine-tuning the fan curve to reduce VRM fan speeds. This would benefit in noise levels, as the VRM fan doesn’t need to spin all that fast (FETs can take ~125C heat before they start losing efficiency in any meaningful way), and so the GPU + VRM fans can spin asynchronously to help with the noise profile. Out of box, EVGA’s fan curve is a bit aggressive, we think – but we’ll talk about that later.

Here’s a quote from the previous article on EVGA ICX, just to recap some of the other technical details: 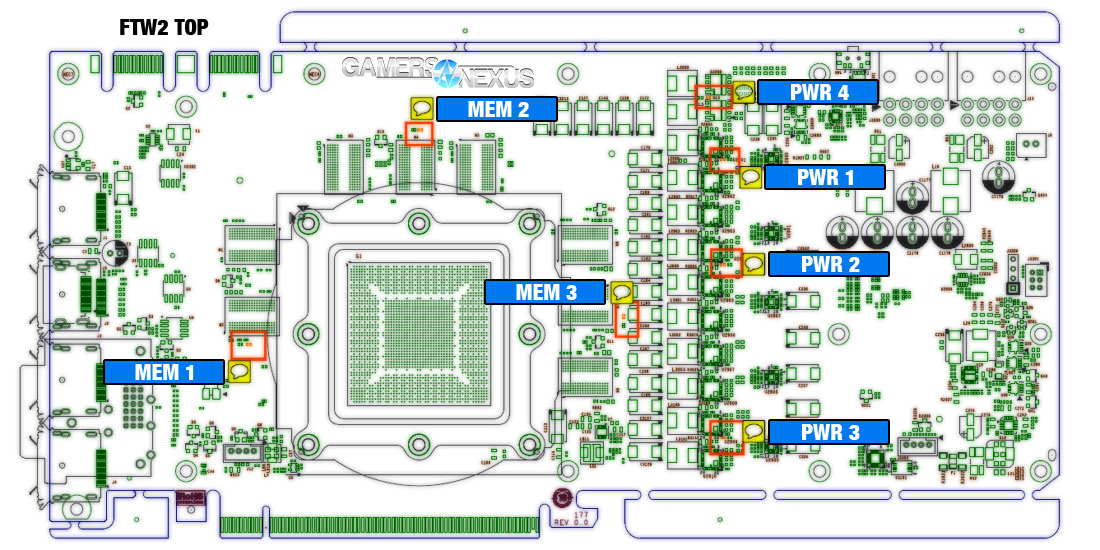 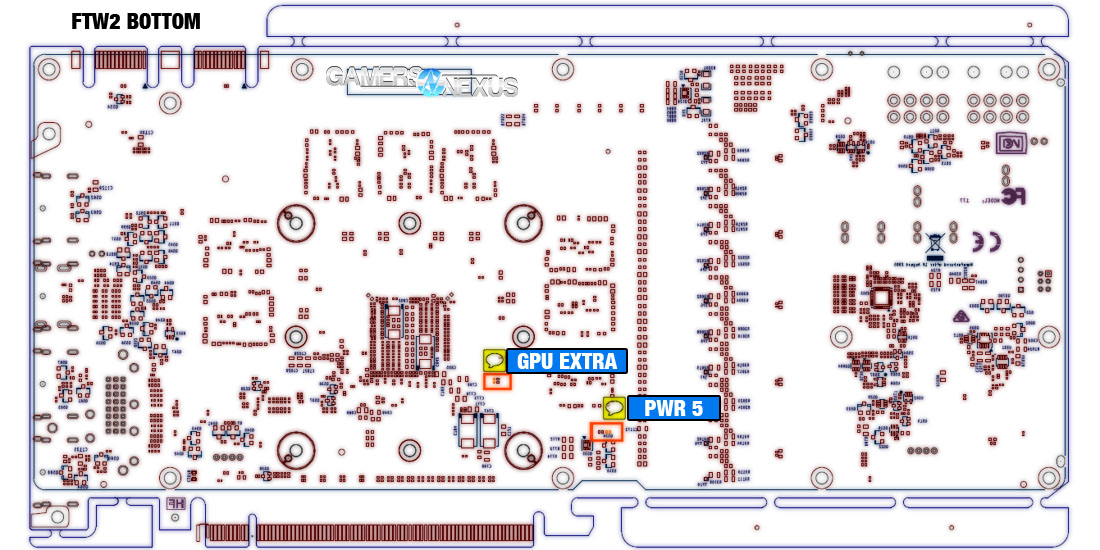 “Above is an image of the EVGA front-side and back-side of the new GTX 1080 FTW2 PCB, to be outfitted with the ICX cooler. For point of clarity: When we refer to the “front” of the PCB, we are talking about the side with the GPU.

The biggest part of the ICX cooler is its implementation of thermistors for real-time temperature sensing on a second-to-second basis, useful for diagnosing VRM and VRAM temperatures. As discussed above, this is a critical step forward in video card design, as the GPU dies are now efficient enough that nearly any reasonable aftermarket cooler will keep them well within limitations. This introduces an interesting challenge: With GPU temperatures lower, fans controlled by traditional PWM based on the GPU will spin at lower speeds than might be comfortable for a VRM.

The sensors talk to an MCU (microcontroller). EVGA hosts two MCUs on the new ICX coolers, both SC2 and FTW2 series cards, with one of the two dedicated solely to controlling the actually functional RGB indicator lights on the top of the card.

But back to the actual sensors: There are two primary types of sensor used in a PC hardware, with EVGA opting to use thermistors of the negative type. NTC thermistors have a resistance-temperature curve, responding to higher temperature results with lower resistance. The MCU reads the voltage off of the thermistor and then calculates the temperature of the sensed object, whose output is then to control fan RPM for the newly added VRM fan.

With a better understanding of how EVGA is sensing its temperatures, let’s now go back to the topic of placement of those thermistors:

The front of the PCB – the one hosting the GPU – positions three thermistors near the VRAM modules, with an additional four thermistors for controller and VRM (collectively “power”) components. It is not feasible to mount thermistors under the VRAM modules (which use a 170 BGA package, or sometimes 190 BGA for G5X), so EVGA must settle on the next best thing. The thermistors are therefore mounted just off to the side of the VRAM package, top-side of the PCB, in a position that EVGA determined internally to be close in temperature to the VRAM case temperature. In terms of testing and engineering, EVGA likely mounted thermocouples (as we do) or thermistors to the top of the VRAM packages, then moved around the thermistors on the PCB until the temperature matched as closely as possible.” 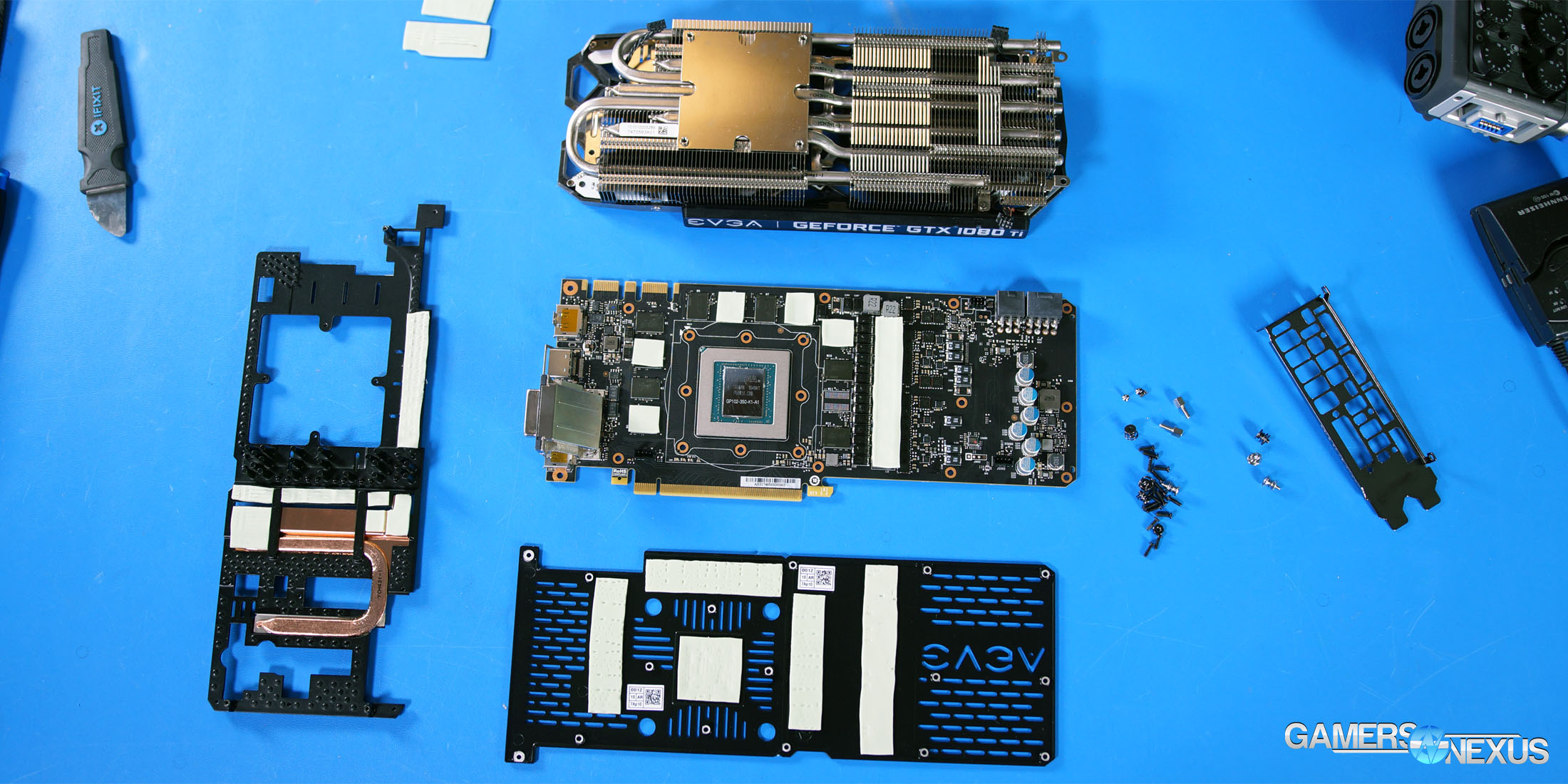 While much of this remains the same with the SC2 card, a few key items are different. First, thermistor placement is different, so the 1080 Ti & 1080 SC2 ICX devices are not directly comparable without using third-party measurement tools (like our thermocouples we mount). 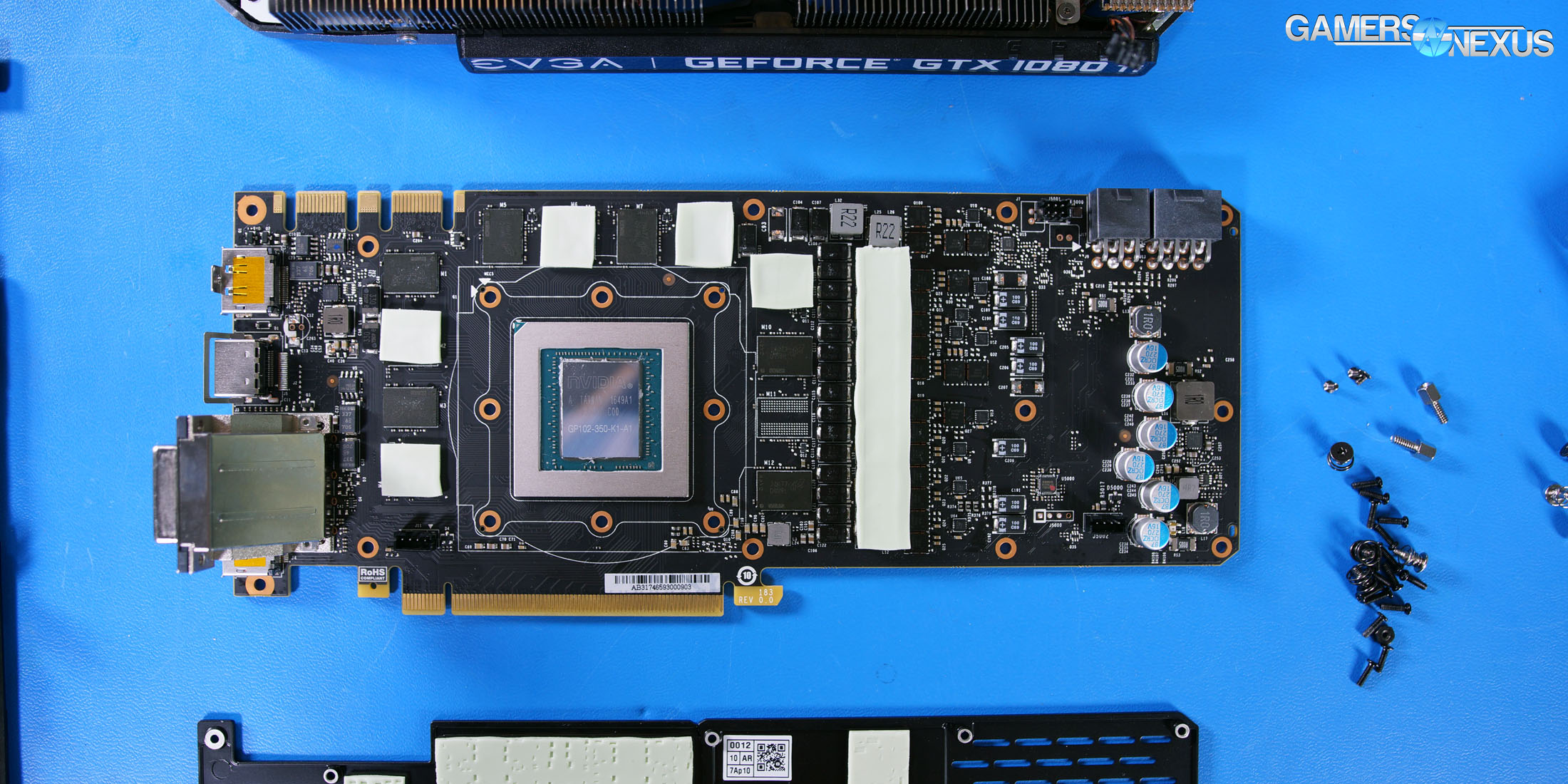 More importantly, though, the cooler has changed. EVGA’s baseplate for the SC2 card now features still more bumps to increase surface area – hard to say exactly how helpful they are without A/B baseplates – and the cylindrical fin stack is now taller. These “pin fins,” as EVGA calls them, are mounted directly above the right-side VRAM components and capacitor banks, which is one of the three hottest places on any video card PCB (the hottest being the inductor/FET line, and the second hottest being the GPU proper). 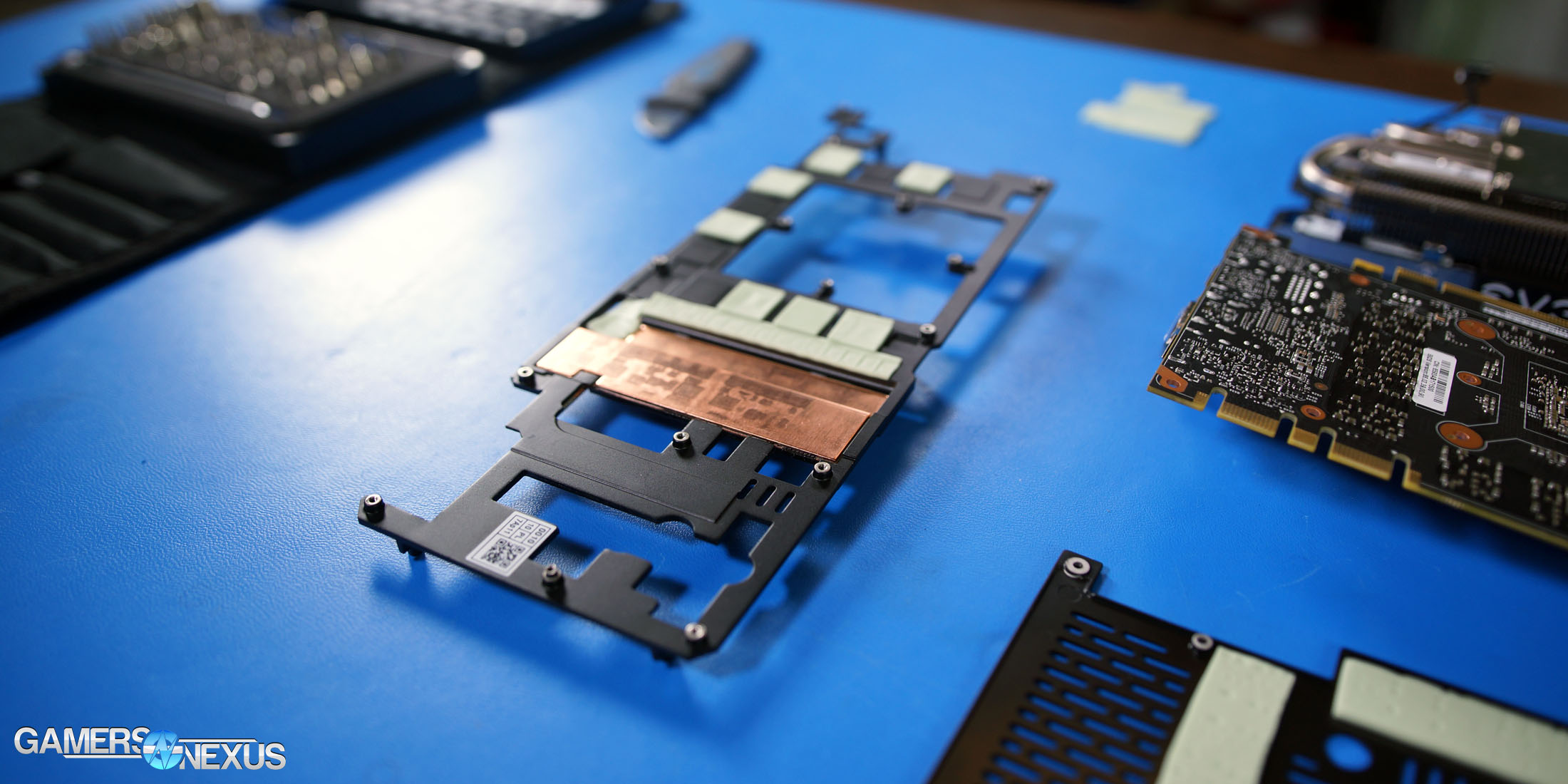 Speaking of the FET/choke line, EVGA has also changed that part of the baseplate in a significant fashion. The SC2 card uses a copper coldplate to conduct heat away from the FETs and, unnecessarily, the chokes and into a newly implemented heatpipe. The heatpipe routes under the VRM fan and sinks via thermal pad into the aluminum heatsink. EVGA’s gone a bit overboard with the thermal pads lately; it’s not going to hurt anything, but they’ve definitely got something to say after the ACX thermal pad deficiencies. This card, it so happens, uses pads on nearly every single component and along the backside of the PCB.

Let’s get to the thermal testing first.