The first chart is our clock versus temperature plot, which is used under a power virus scenario to draw maximum power through the card and test its clock stability. Note that this type of test does not enumerate the clock in the same way that a gaming workload would – the frequency is lower here than in games – but the power draw is significantly higher, and more load is placed on VRM components.

The FTW3 is able to leverage its cooler to maintain a stable clock, similar to what we’ve seen with most the 1080 Ti cards we’ve tested thus far. The clock has a range in fluctuations of about 50MHz when held at 66C, indicating relatively consistent frequency throughout the test. That’s what we want to see.

Ramping into other thermal tests, let’s first start with a reminder: Here’s a refresher from our SC2 coverage. 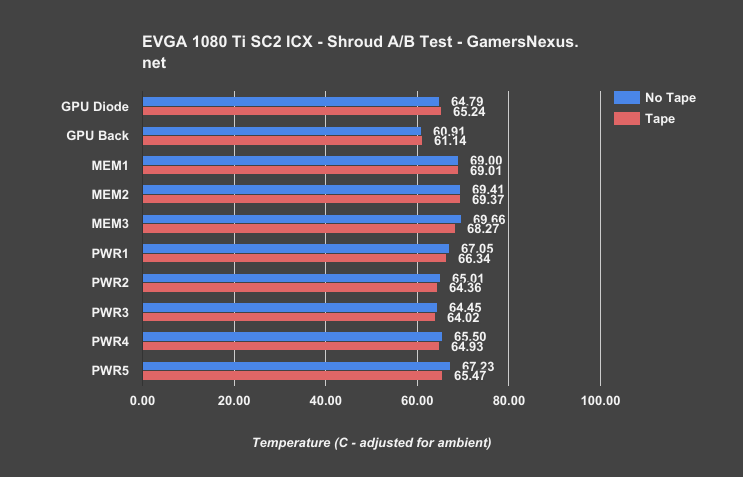 This chart shows the SC2 temperatures with and without the holes in the shroud, indicating that the holes in the faceplate of EVGA’s new design are more for looks than for functionality. The same holds with the FTW3 – they’re really just there for looks. Let’s move to a test where, just out of pure curiosity, we unplugged the third fan and ran the other two at fixed speeds. 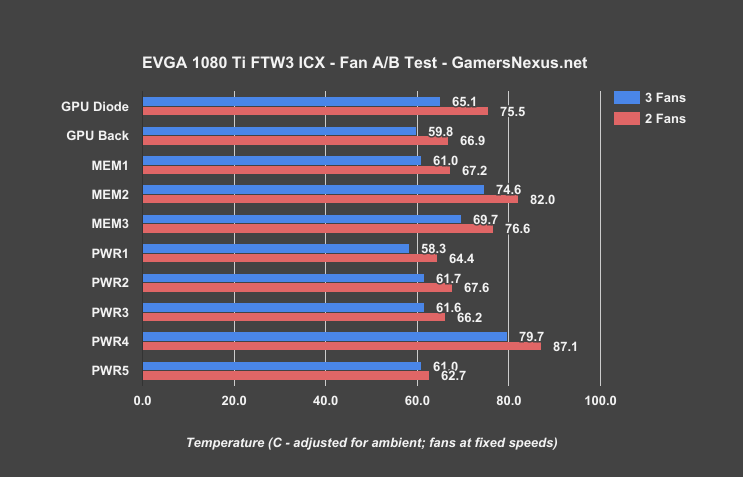 This test was conducted with all fans at the same speed. The only difference was disabling the power fan in the second test, just because we figured the overengineering on the VRM and cooler would be enough to keep the power components within spec without that third fan.

The result is mostly what you’d expect: Running two fans results in higher temperatures, obviously, but despite being somewhat expected, this data is still really interesting. We don’t normally have this level of access to temperature sensors without placing them on the boards ourselves, and we often limit that to two to three thermocouples. Because there are 9 diodes on the ICX cards, we’re able to fully understand the impact of a two-fan versus three-fan cooler across the PCB, not just on the GPU and our thermocouples.

As far as power component temperatures are concerned, it’s really not that much of a loss to move to two fans. The overbuilt VRM and heatsinks do their job to keep the VRM components within spec in our tests. Even that 87C number for PWR4 isn’t terrible for a MOSFET, considering they can withstand over 125C of heat.

What’s more interesting is that the third fan, which EVGA has positioned over those power components, seems to most heavily impact the GPU itself. GPU diode temperatures increased by roughly 10C without the third fan, despite the fact that the GPU and Memory fans – the leftmost two – are spinning at the same speed. This indicates that the heatpipes and right-side heatsink are dissipating a significant amount of heat from the GPU silicon, and that third fan is necessary to dump that heat from the fins. We can validate these numbers by looking at GPU backside temperatures, which have also risen about 6C.

The memory components really don’t seem to care either way. They are certainly benefited by the third fan, but the difference is about 6-7C, and those memory modules are rated for well over the heat they’re experiencing in both tests.

Although it’s not something you’d likely do, disabling the third fan, it is genuinely interesting information. This helps us understand how the cooler and fans work together so that we can better build fan profiles in the future. 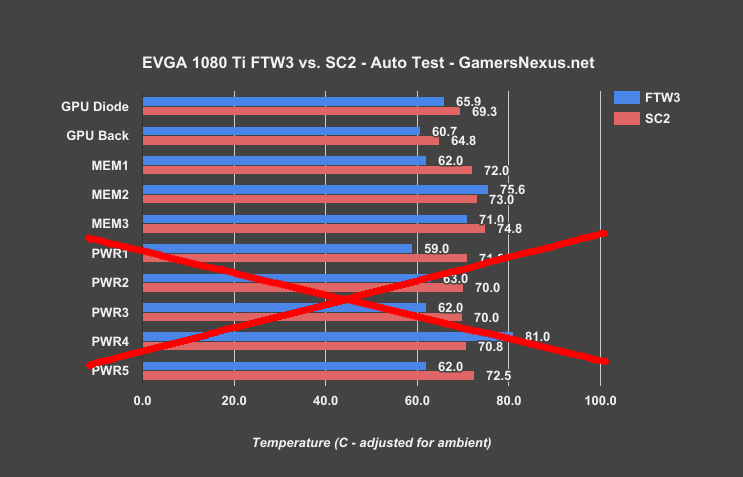 This next chart shows temperatures versus the SC2. Unfortunately, half of this chart is useless – here’s why: EVGA positions its SC2 and FTW3 thermistors in different locations on the board, which we can show here:

This means that, despite really wanting to compare the two directly, we really can’t. Power reading 4, for instance, is really warm on the FTW3 – much warmer than the SC2 – but it’s also on the back of the PCB and located behind VRAM and above the GPU backside. That’s going to be a hot location. The SC2 positions its PWR4 diode on the front-side and within the MOSFETs, so it’s measuring a completely different location on the board.

Going back to our thermals chart, you can see how this difference plays out above: PWR4 on the SC2 looks way lower, but it’s also measuring a different component. These are therefore not directly comparable, aside from the two GPU temperatures and some of the memory temperatures. Fortunately, we also position our own thermocouples on all the cards, and put those in the same spot each time. We can directly compare these. 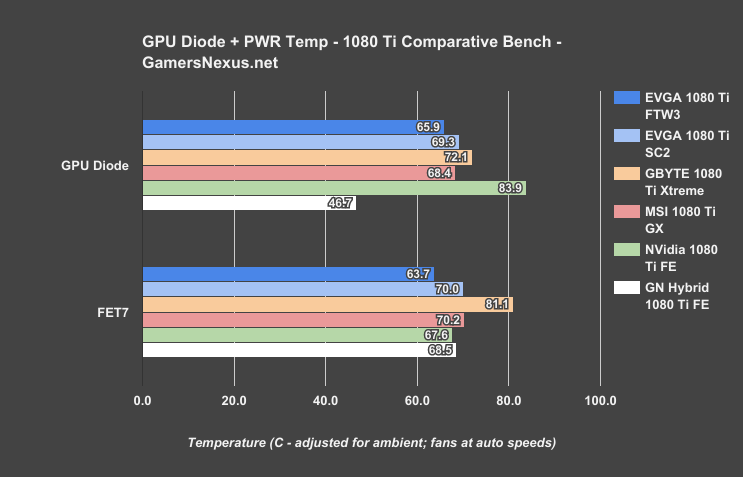 Let’s look at the FTW3 components we measured with thermocouples as opposed to the ICX NTC thermistors, then compare that against MSI Gaming X ($750), Gigabyte Xtreme Aorus ($750), and the nVidia FE card ($700).

We’re still expanding on this chart. This is brand new, and we’re excited about getting more detailed with it. VRAM is being added next, and the iteration after that will be to show component temperatures with all coolers equalized at 40dBA output.

For now, though, this is where we’re starting. With auto settings for the coolers, all cards running out-of-box, we see the EVGA 1080 Ti FTW3 ($780) keeps lower power temperatures than everyone else, meaning that they could sacrifice some cooling for lower noise. This is a common trend with EVGA, where the auto fan profile is aggressive compared to competition. At 63.7C for the power measurement on the middle FET, EVGA runs nearly 20C cooler power components than Gigabyte, who we remarked ran warm in our Xtreme Aorus review, and about 7C cooler than the Gaming X.

So far, the EVGA FTW3 is the coolest 1080 Ti that we’ve tested to-date for both GPU diode and power component temperatures. There’s another component to coolers, though, and that’s noise. 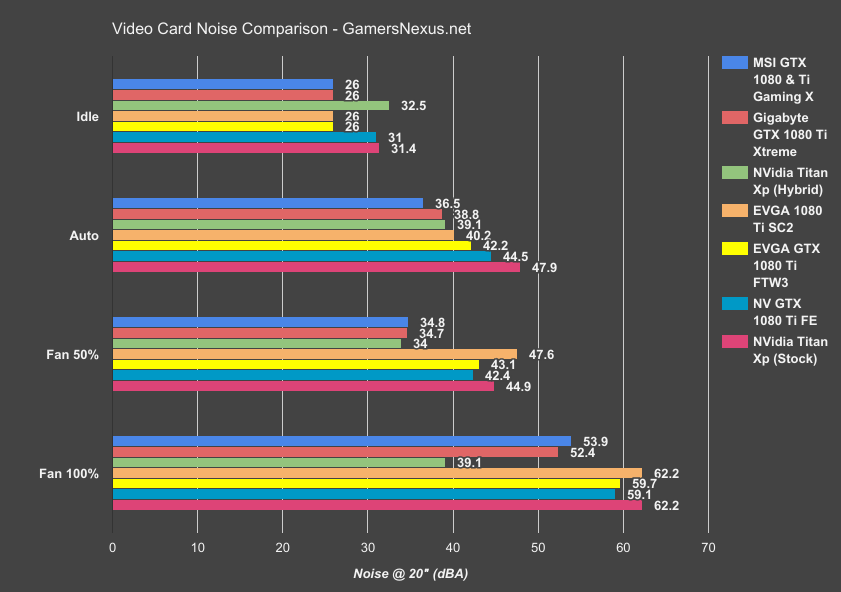 Until we add our 40dBA fixed temperature testing, let’s look at the normal noise charts.

Under idle conditions, the fans spin down to 0RPM, just like several other cards do right now. That said, we’ve noticed that the GPU fan does like to spin-up to 700RPM somewhat regularly, but you could shut that functionality down with a custom fan curve – it really has no business spinning until the GPU starts hitting 50C or higher.

Auto conditions place the EVGA FTW3 at 42.2dBA, whereas the MSI Gaming X operates at 36.5dBA and Gigabyte Xtreme Aorus is at 38.8dBA. Considering both of these cards run warmer than the FTW3, which is the coolest of the 1080 Tis we’ve tested thus far, it makes sense that the quieter cards would run a bit warmer. The really interesting test will be our fixed dBA temperature tests, which are still underway.

Regardless, for now, the EVGA FTW3 sits perceptibly louder than the Xtreme Aorus and Gaming X. The Gaming X deserves praise for its significantly lower noise levels, which are largely made possible by the fat cooler with tall height fans. EVGA’s FTW3 fans are about 90mm across, whereas the Gaming X uses 100mm fans.

Continue to the next page for gaming benchmarks & conclusion.