As the GPU approaches 55-60C, the stock profile dictates that the fans kick-in and start ramping-up to match temperature. The GPU frequency fluctuates more heavily with this card than with the FTW3. We saw a frequency range of approximately 62MHz on the EVGA FTW3 ($780) and a range of about 152MHz on the ROG Strix ($780). Some of this can be credited to chip-to-chip manufacturing tolerances and variance. We do not have a large enough sample size of the Strix to be sure.

Regardless, the card’s temperature target seems to be 65C, at which point the fans are spinning at 1400RPM on our bench. We’ll look at fixed-noise temperature performance in a bit.

Moving on, our next chart shows individual component temperatures for the ASUS 1080 Ti Strix card when under auto cooling conditions. We measure the power components around the center of the VRM, as that’s the hottest location. The MOSFET temperature reading spits out at around 68-69C, which is well within any reasonable MOSFET spec. Most FETs can take 125C and beyond, so this one’s no problem. So far, we’re cooler than the Gigabyte Xtreme power components.

VRAM is a bit on the warm side, but still well within spec. We’re looking at around 85-87C for the hottest VRAM module, sandwiched between the GPU and the capacitor bank for the VRM. 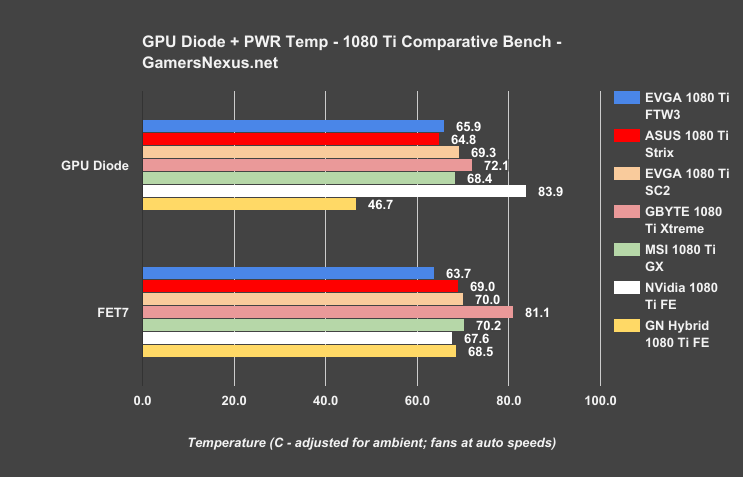 Looking at power component temperatures, EVGA’s FTW3 still reigns king in this department – entirely thanks to its overbuilt heatsink and asynchronous fans – with ASUS landing middle of the pack. The only real takeaway here is that Gigabyte’s card is the least impressive when looking at out-of-box thermals.

There are some challenges with this approach to testing. To “normalize” for a fixed noise output means we must fairly achieve that noise level on all tested devices. We use a passive test platform for finding the correct fan RPM to meet a 40dBA measurement (noise floor is ~26dBA), then guess/check fan RPMs until our reading is 40dBA @ 20”, +/- 0.3dBA.

EVGA’s asynchronous cooling makes things complicated, though. With cards that use a fixed fan speed across all three fans, it’s a straight-forward process: Find the output, set the fan speed, run the test. For EVGA, we have a choice as to how we achieve that dBA output – we can increase GPU fan, decrease MEM fan and PWR fan, or we can do a balance of all of them, or we can run higher MEM + GPU fans and a very low PWR fan. There are lots of options. For our initial testing, we ran the FTW3 with proportional fan speeds to what we typically see in real workloads with EVGA’s default profile (54%/40%/40%).

With fan speeds configured to a fixed 40dBA output, we finally start to see some distinction between these AIB partner cards. The other cards are all-or-nothing fan speeds, making them easier. ASUS is impressive, here: The ROG Strix runs cooler on the GPU, producing a 31.4C delta T over ambient value, which is a full 6C cooler than the next closest card – the Gaming X. The Gaming X has generally been one of the quietest cards on our bench. That card has now been dethroned by ASUS.

Next, the Gigabyte Xtreme Aorus, which doesn’t look great when these are all tested at stock speeds, is running 40.7C delta T. The FTW3 is last, but again, it is the most difficult to configure. You could get these temperatures lower and sacrifice other component temperatures, if so desired.

Power temperatures measured on the middle MOSFET, offset up, land the Strix again at the lead, with a 35.4C delta T measurement. EVGA’s FTW3 is the coolest for VRM components when all cards are configured to auto, but loses ground to ASUS here with its 40.4C delta T value, with MSI trailing at 42.1C delta T.

Finally, the VRAM module between the GPU and VRM measures at 52.7C delta T on the ASUS Strix card, where EVGA runs a 56.6C VRAM temperature, trailed by MSI at 57.9C.

With these noise-equalized tests, ASUS is the clear victor – and not in an insignificant way, in the GPU test. We’re excited about this new test procedure and will be rapidly expanding it for future reviews. It only really works when we’ve got a bunch of the same card, as comparing these numbers between multiple GPUs wouldn’t really make much sense. Still, we’ll play around with it as content continues to ramp.

Under idle conditions, the ASUS Strix makes no noise, and so we see our noise floor for the test environment. The Strix card’s fans spin down when under no load, as do the fans of the SC2, FTW3 with BIOS2, Gaming X, and Xtreme Aorus.

When left to their own devices, the Strix is the second quietest card, with the Gaming X holding on to the quietest rank. The Strix pushes about 38.6dBA when under an auto fan curve, so it’s spinning slower than in our aforementioned 40dBA test. This plants it roughly tied with the Xtreme Aorus card, and perceptibly quieter than the FTW3 card with auto fan speeds. To be fair to EVGA, though, the FTW3 is a dual-slot card – not many others can claim that at this time.

At 50% fan speeds, the 1080 Ti Xtreme and Gaming X cards are roughly tied, with the Strix, FTW3, and FE roughly tied. All three are noticeably louder than the Xtreme and Gaming X. The SC2 is more than 2x louder than the Gaming X in perceived noise output, as this is a logarithmic scale. This number isn’t all that useful, though, since you’re either running the coolers under auto conditions or under fixed fan curves.

We also have a chart of noise at 100%, just to provide perspective. Your fans will never realistically reach a 100% fan speed, as the cards would rather sacrifice frequency than push decibel levels this high.

At 100% fan speed, the Strix is among the loudest three cards on the bench, including the SC2 and Titan Xp. All this really means is that ASUS allows its fans to go faster than the others, combined with acoustics of the cooling solution.

If you’re using your card out-of-box, with no changes whatsoever, auto settings are the acoustics you can expect. ASUS has one of the most efficient coolers we’ve tested thus far, shown by the thermal performance overall and by the 40dBA normalized charts.

As stated heavily in the video version of this review, gaming tests lose their value once we’ve established a baseline for performance for the 1080 Ti. They’re all about the same, +/- small percentages on either side. Most of the differences are in chip quality, not in actual PCB/cooler quality. There are exceptions – but not with these high-end contenders.

Anyway, let’s get a few gaming tests in there just for validation. 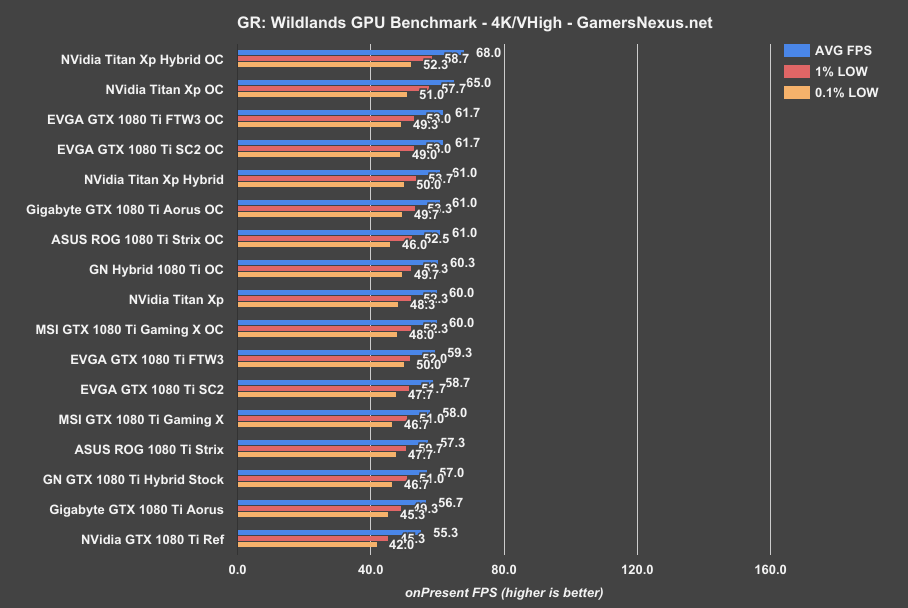 Not much difference between the cards – not enough to speak of, anyway. They’re all roughly the same when stock, +/- 3%, with the only routinely noticeable gain being against the FE card (unless you remove its thermal limit). 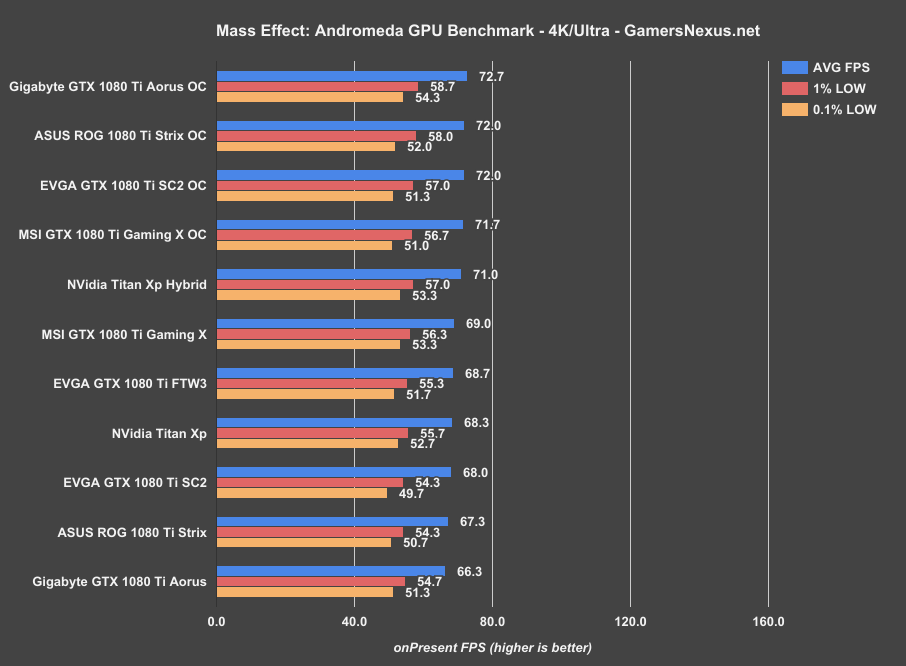 More of the same. These 1080 Ti cards all perform effectively equally. 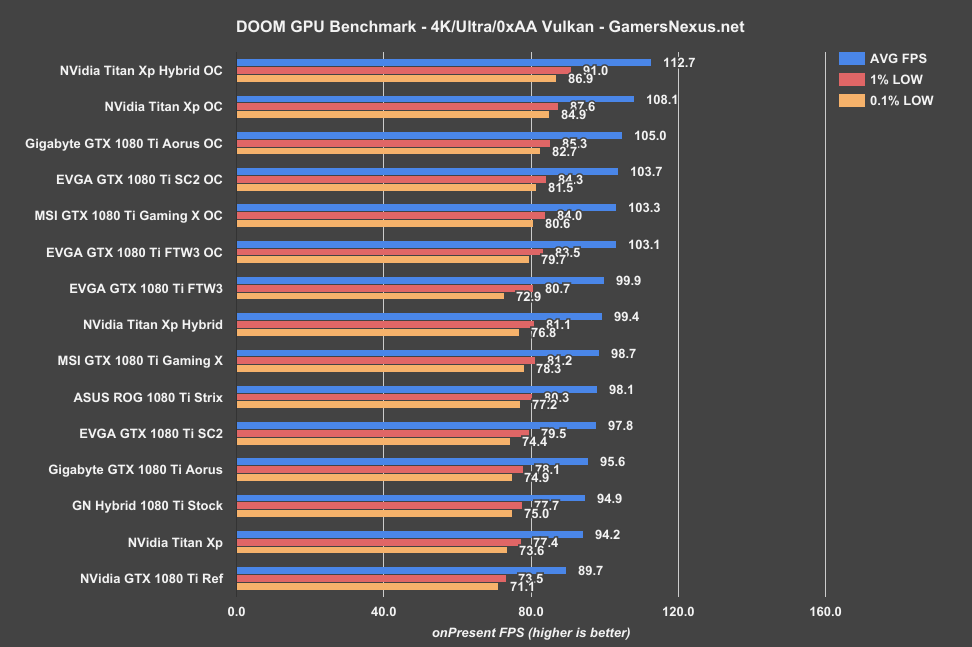 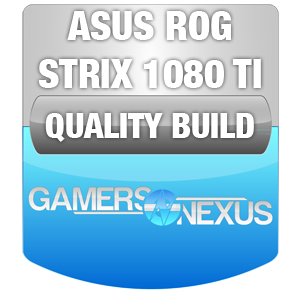 Like the EVGA GTX 1080 Ti FTW3, this card is a tough sell at $780. Also like the FTW3, it’s a well-engineered card with superior build quality to many of the cheaper options on the market. If you’re buying just for gaming performance, though, you’re in for a disappointment with Pascal – they’re all roughly the same, once accounting for poor PCB and cooling designs (read: entering $720+ range).

But noise and thermals are where these cards make their differences. ASUS’ distinction is in our normalized 40dBA test, where the card’s solution is clearly superior to nearby competitors. The ROG Strix cooler bests EVGA and MSI in cooling performance for the GPU, VRAM, and MOSFET temperatures we collected. We are confident in stating that ASUS’ cooler design reigns supreme when normalizing for a 40dBA output. EVGA still has the most interesting features – ICX is tough to beat, and made huge strides to further the industry’s understanding of what makes a GPU cooler unique (primarily by way of thermistors). The Gaming X remains quietest under auto conditions, in our tests. The Xtreme Aorus card gets increasingly difficult to justify, it turns out, as we test more of these alternatives.

ASUS does deserve praise for its cooler’s efficiency. They keep all measured components cool while running a low noise emission fan setting. It’s not going to make your gaming better if FPS is all that matters, but it’ll make it quieter.

Whether or not it’s worth an extra $30 for the thermal and noise performance – that’s largely up to the buyer. We think most people would be perfectly happy with a ~$720-$750 GPU purchase, like the SC2, Gaming X, or potential alternative ASUS options in the future.