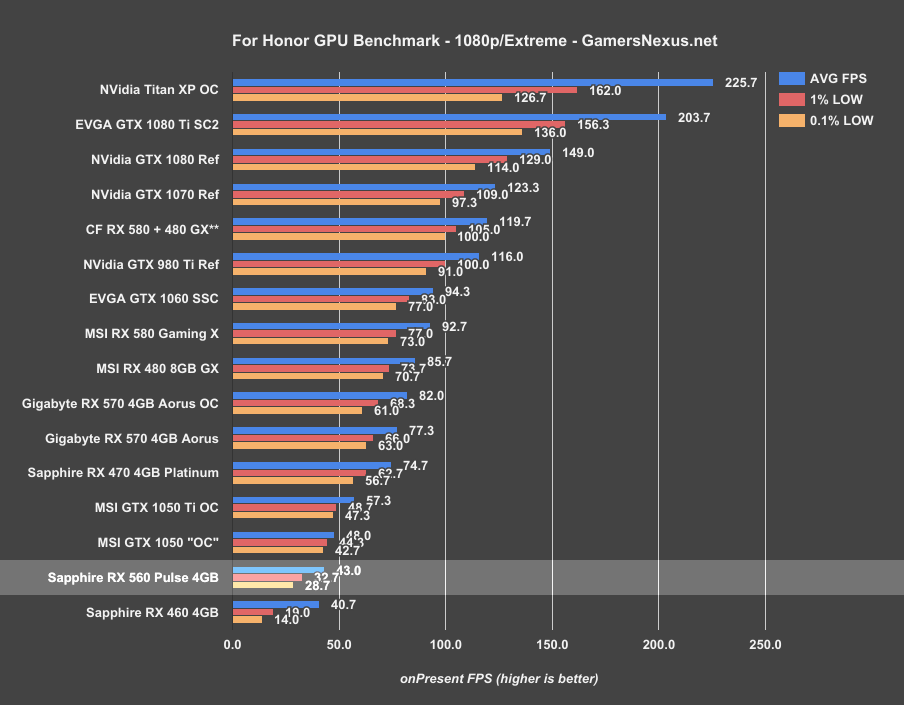 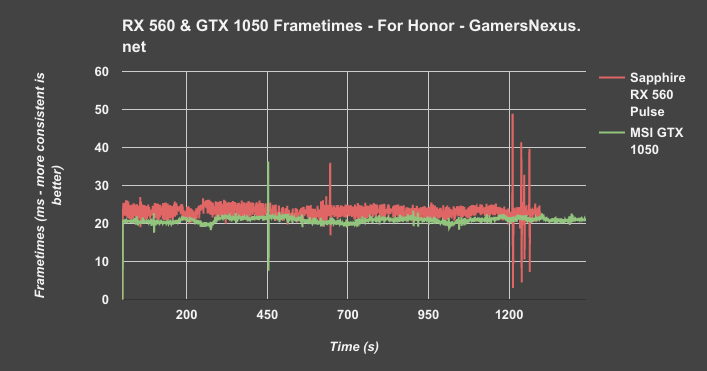 Frametime consistency isn’t king for the RX 560 in this particular title, as we can show in this frametime plot, although the GTX 1050 does reasonably when compared to the 560.

Moving on to Mass Effect: Andromeda, we start with higher settings tests to get some comparative numbers to the higher-end cards, then we’ll move to tests with medium settings. 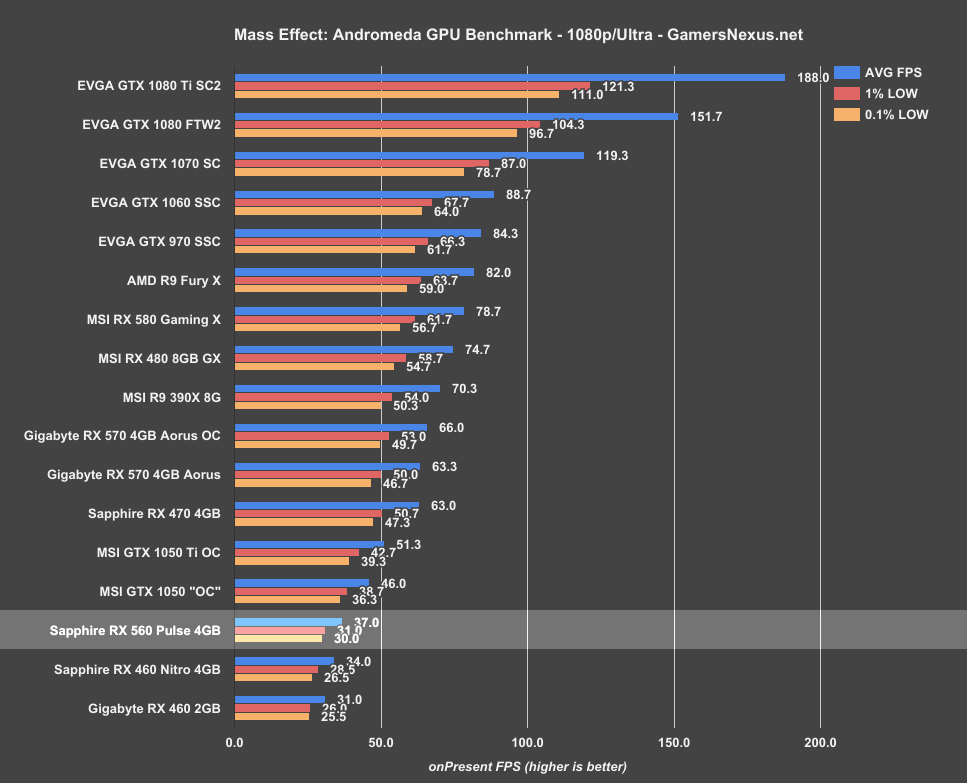 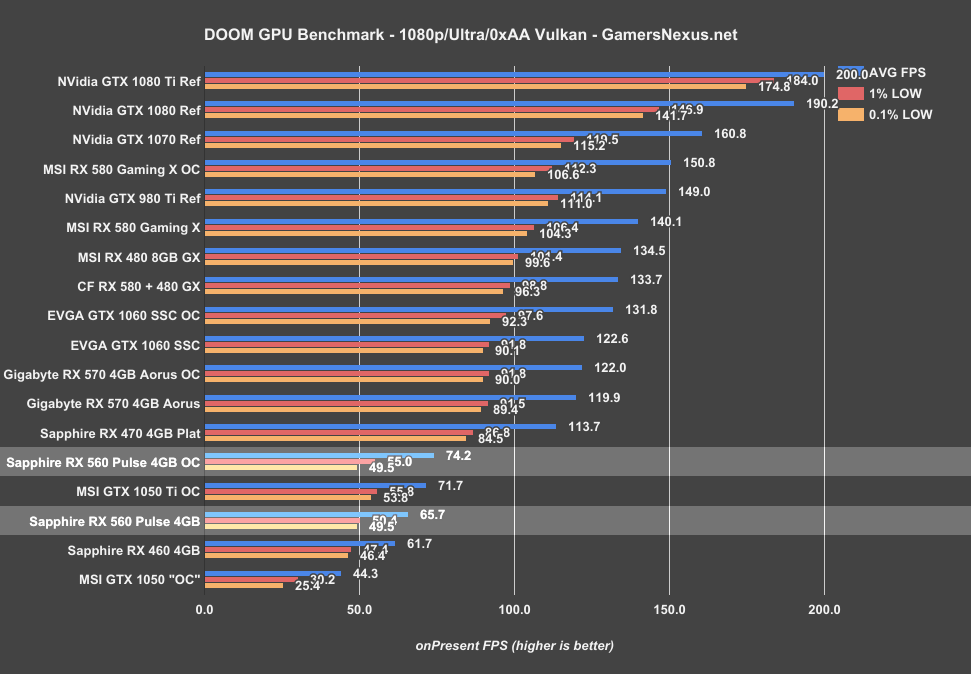 Moving now to DOOM with Vulkan and Async compute, the RX 560 finally begins to pull ahead of the GTX 1050; in fact, once overclocked, it also pulls ahead of the more expensive 1050 Ti. This is in-line with what we’ve seen out of this particular game in the past, where DOOM tends to produce more favorable results for AMD with its Vulkan integration. The MSI GTX 1050 OC struggles a bit, maintaining an average FPS of 44 with lows dipping to 25, and overall produces less consistent frametimes than the RX 560 4GB card. The 560 averages 66FPS, which is about 6.5% faster than the RX 460 4GB Nitro card.

A quick note, here: this is with DOOM configured to Ultra graphics at 1080p – not bad performance for these low-end cards. Even the 1050, although we wouldn’t recommend it. 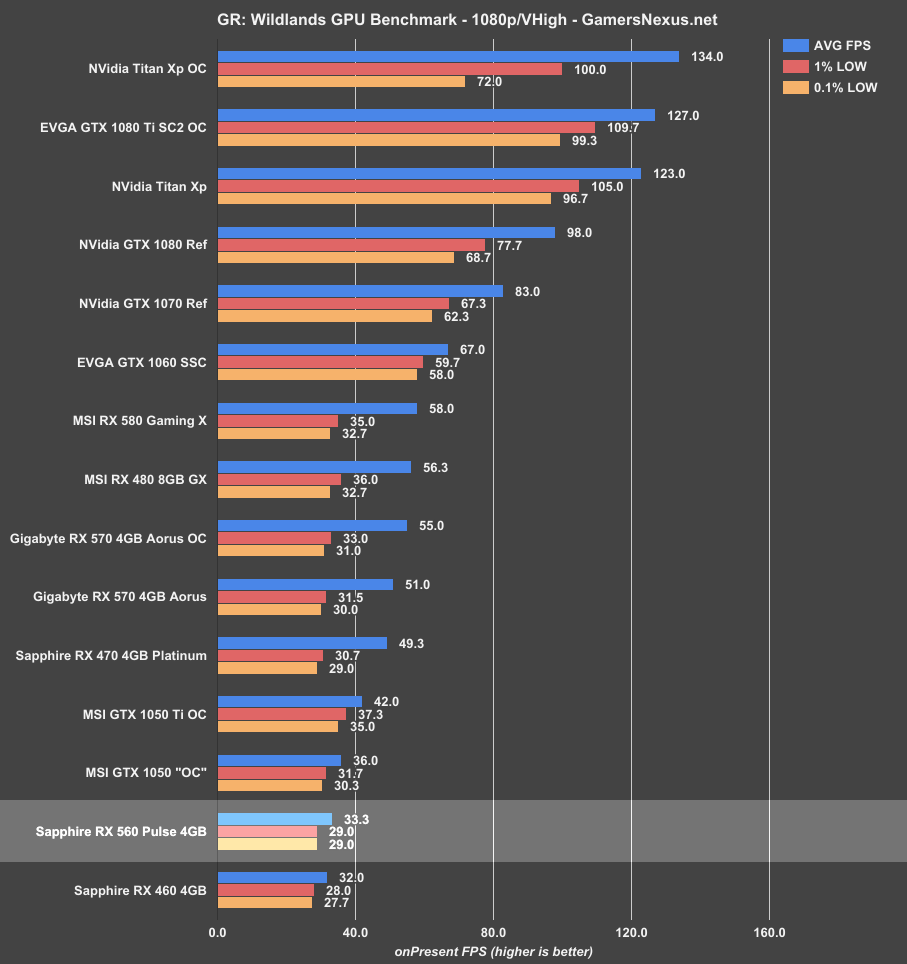 We now move to Ghost Recon: Wildlands, where we’ve got tests at Very High for comparison and on Medium for more realistic representation of the cards.

We’ve got a fairly complete view of performance from top-to-bottom with this chart, with regard to scaling. The RX 560 Pulse operates an average FPS of 33.3, followed by the RX 460 4GB card at 32FPS AVG. The GTX 1050 is able to sustain a higher average at 36FPS, with the 1050 Ti running about 42FPS AVG. For perspective, the RX 570 runs an average FPS of 51, leading the RX 560 by 53%. It’s not until RX 570, RX 580, and GTX 1060 territory that we start reaching numbers where it’d be possible to play on a mix of Very High and High settings. The GTX 1060 is the real victor of that stack, but at more than two times the cost of the GTX 1050 and RX 560, can’t really be considered as an alternative in the price-point. Instead of trying to make that work, let’s just run the tests with lower settings. 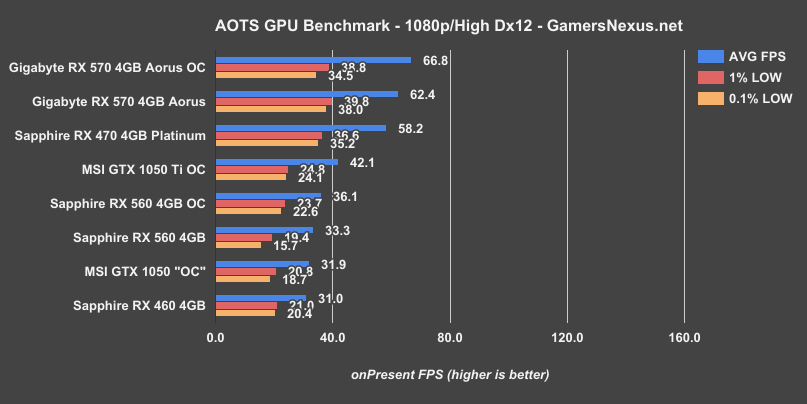 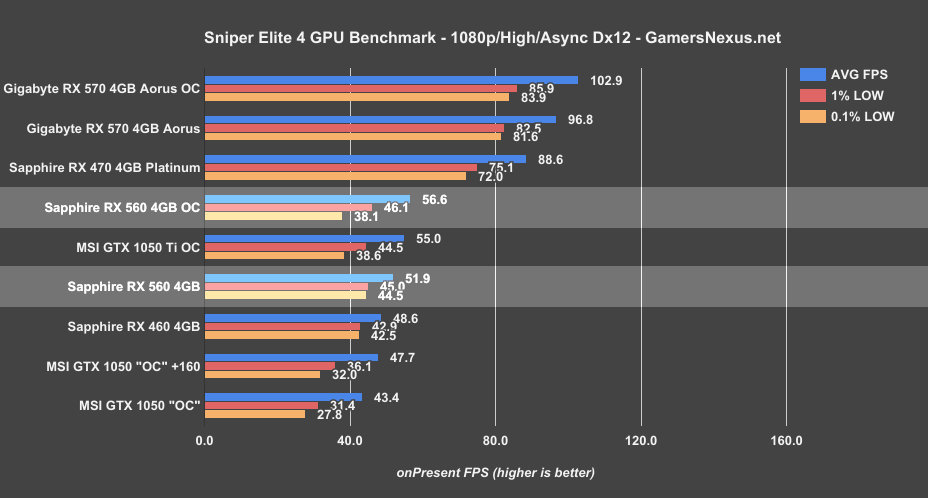 Sniper Elite 4 is another game where we’ve only just started running low-end card tests, so it’s not as populated as our 4K tests. Looking at 1080p/High, the RX 560 4GB card runs an average of 52FPS, with overclocking producing a 9% performance improvement over baseline. The RX 460 runs a 49FPS AVG, making the gap between the 460 and 560 about 6.7%. The GTX 1050 is led by all of these, thanks to its 43FPS AVG, though overclocking nearly gets its averages on-par with a 460 – despite lower performance in frametime consistency overall, as illustrated by GN’s low values.

We’re not yet looking at 4GB vs. 2GB comparisons for the RX 560 (but hope to), but the promised price-point of ~$115 (a $15 difference) nearly makes such a comparison irrelevant. Our initial reviews of the RX 460 and GTX 1050 ($80 to $100) demonstrated that the RX 460 was a bad purchase, given the competition at the same price bracket. Things have changed today – part of that is the games market, where we now have the likes of DOOM and Sniper holding the RX 560 well ahead of the 1050 – and part of that is just the core and frequency increase. Still, it’s not a clean sweep; the RX 560 4GB is behind in our Dx11 test suite, costs more ($15 more from retail, or $35 more if counting near-constant MIRs), and consumes more power. Considering, though, that its Dx11 deficits aren’t as large as its surpluses in other test titles, the RX 560 is far from a “bad buy.”

This particular model, the Pulse from Sapphire, is able to maintain perfectly acceptable VRM FET and VRAM temperatures in spite of its low-quality cooler, thanks to lower amperage throughput on the 560 GPU. Temperatures aren’t offensive, performance isn’t offensive, and power draw is acceptable.

These cards aren’t the most exciting to look at, given the price bracket, but they fill an important niche. At this point, the 1050 is aging – that’s not to say the 560 is “new,” seeing as it’s really just Polaris with a new BIOS, but the unlocked cores do help the RX 560 regain ground where the 460 lost handily. The extra ~5-7% over the initial RX 460 launch helps out.

Really, though, just buy whichever fits the budget. Unless you’re playing one of the specific games where the 560 takes a strong lead (like DOOM or Sniper), performance is similar enough to just go for the card that favors the budget. If games like DOOM and Dx12 titles are in your regular games arsenal, then the 560 seems to suit those titles (from our tests).

More to come on this card.