Our charts start with the stock card (air cooler) and will move to the Kraken G12-assisted H2O variant. We’ll open with thermal vs. time tests, then move to “GN EQ” charts (temperatures at steady state), then get into noise-normalized temperatures and liquid cooling.

Out of box, the GTX 1080 Ti Armor operates a GPU temperature of around 77-78C when left to its own devices. This is in our torture workload, and triggers the fan into an 80% speed. This 80% fan speed is the max that we found for the 1080 Ti Armor; its curve seems to try to reduce the instances of >80% duty cycles on the fan. With its 80% duty cycle -- the most common speed when under any kind of gaming load (and achieved within moments) -- the Armor outputs approximately 46dBA of noise. At this noise level, the card manages to be one of the worst performers on our charts in both noise and thermals. This is thanks to the low-spec heatsink that’s stuck on a relatively high TDP component.

As for measurements on other components, the VRAM module measured -- located between the GPU and the inductors -- is nearing 90C under these workloads. In a higher ambient environment, like the inside of a case, an additional 10C would not be unheard of. That starts pushing VRAM component temperatures fairly high. Power component temperatures are closer to where the Gaming X PWR component temps sit when measuring the same MOSFET: roughly 71.2C here, which is within reasonable variance and well within any operating spec for a MOSFET. 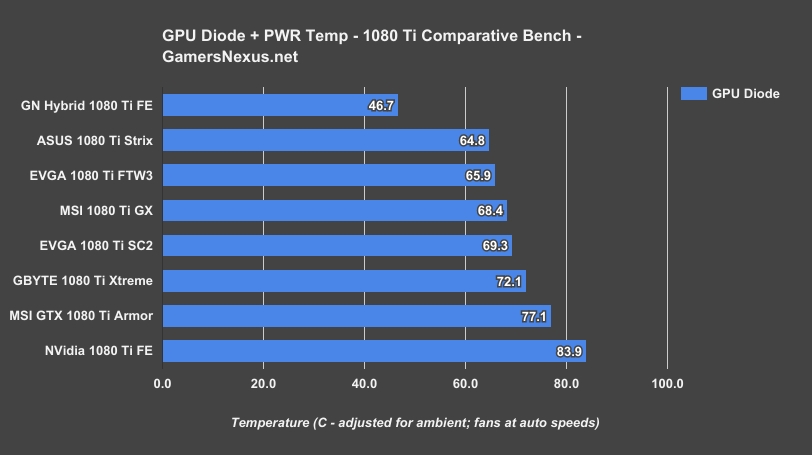 MSI’s Armor cooler is the worst of the AIB partner models that we’ve tested thus far, and also the cheapest. The GPU diode reports a 77C average in this workload, comparatively close to the Founders Edition card at 84C (which is limiting the clock as a result). That said, the FE card has more fan headroom to resolve its thermal issues; the Armor does not. At 77C, the noise output is about 46dBA from the Armor card, whereas the FE card runs a 45dBA noise output with its auto configuration and 84C reported temperature.

In the very least, these numbers show that just buying any AIB partner model isn’t magically going to be better than reference. The king of cooling efficiency versus noise, at least in our testing thus far, still appears to be the ASUS Strix 1080 Ti -- but it’s also $780. This card gives us some perspective: the Strix maintains its 65C temperature with a noise output of around 38.6dBA, which is perceived by human ears as nearly a 2x reduction in noise output vs. the Armor (accompanied by a 12C reduction in GPU temperature).

If we look to a more reasonably priced card, the EVGA 1080 Ti SC Black Edition (non-ICX card) would perform effectively equally to the SC2 ICX card that we have here, just with synchronous fan RPMs. The SC2 runs around 69C load, matched against a 42dBA noise output -- another non-trivial reduction over the Armor. 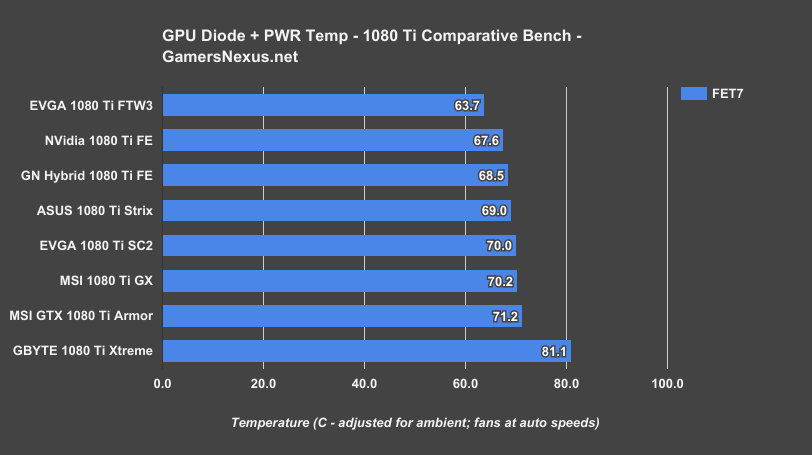 The MSI Armor does OK in power temperatures and lands around where the rest of the pack lands -- though again, the components used are different on each card. This is similar to the Gaming X, as previously stated.

We’re measuring in Delta T over ambient now, so keep that in mind for the above chart. Testing is done with the cards configured to a 40dBA output, then tested to see where the temperatures land. We do not yet normalize for power, but do normalize for noise.

The above plot shows noise levels at different fan speeds with the stock cooler, establishing a fairly linear trend.

This chart is produced using the higher auto fan speeds (~80%), showing that the MSI 1080 Ti Armor falls hard as temperature ramps. The frequency falls from ~1630MHz to ~1520MHz within the first two minutes of the test (including gaming workloads). Keep in mind that this is a power virus, so clock is not enumerated as a game would demand -- but we’ve got Superposition benchmarks to illustrate those numbers.

The same thing here, really. We’re immediately dropping clocks and framerate as a result of the rising, unchecked temperature.

Here’s a framerate reduction over time table. This shows eight loops of Metro: Last Light tests, illustrating performance degradation over time resultant of thermals. The loss is not great enough to complain about in real time, but it is an unnecessary reduction in performance. A better cooler would completely absolve the card of these issues. The Gaming X does not experience the same degradation at the same rate.

Sticking an NZXT Kraken G12 cooler onto the MSI 1080 Ti Armor will allow us to keep VRM cooling while replacing the GPU cooling with a CLC (Asetek 570LC, using an EVGA Hybrid fan for the radiator cooling).

This chart shows nearly a perfectly flat line for the frequency, which is what we want. This means that we’ve got less clock fluctuation, aiding in framerate and frametime delivery, and we’ve improved overall framerate. This is comparable performance to the Gaming X card, which uses the same PCB and a strong-performing Twin Frozr cooler:

The fact that the Gaming X aligns so closely with the liquid-cooled version of the 1080 Ti Armor tells us that, yes, the Armor really is a Gaming X with a cheaper cooler. That makes it a good solution for liquid cooling.

This chart provides a look at component-level temperatures after our liquid cooling mod, showing a reduction in VRAM, MOSFET, and GPU readings that make for a much better card.

A revisit of the 40dBA normalized noise chart, where we now see the CLC version of the Armor chart-topping. This was with a ~65% radiator fan speed and 900RPM VRM fan speed.

FPS isn’t the biggest deal with AIB partner models of the same card, as we’ve demonstrated before, particularly considering that GPU silicon quality can vary so much from card-to-card. That said, we can see some differences under adverse thermal scenarios, as demonstrated clearly in our 1080 Ti FE Hybrid mod results. 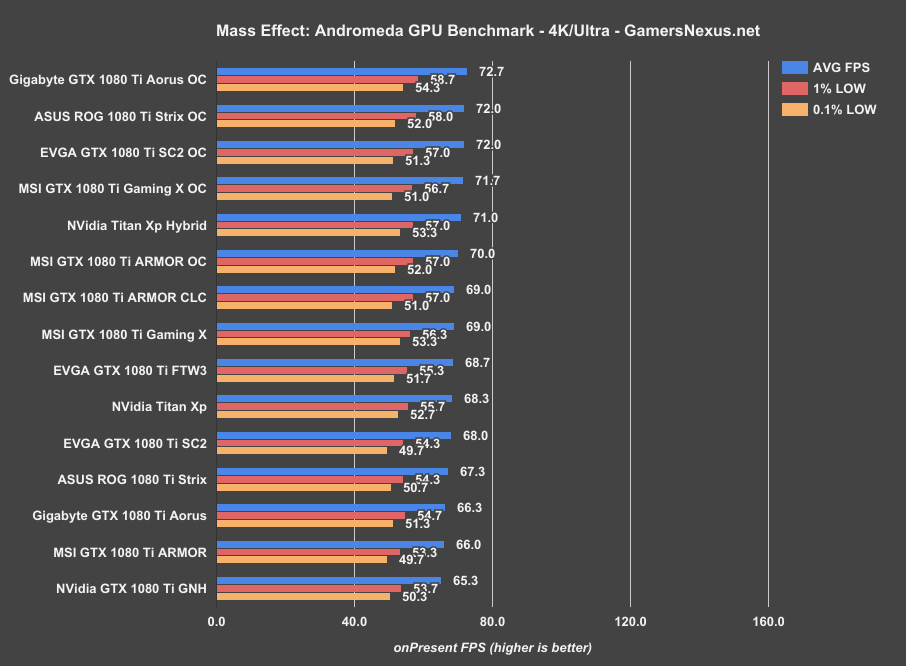 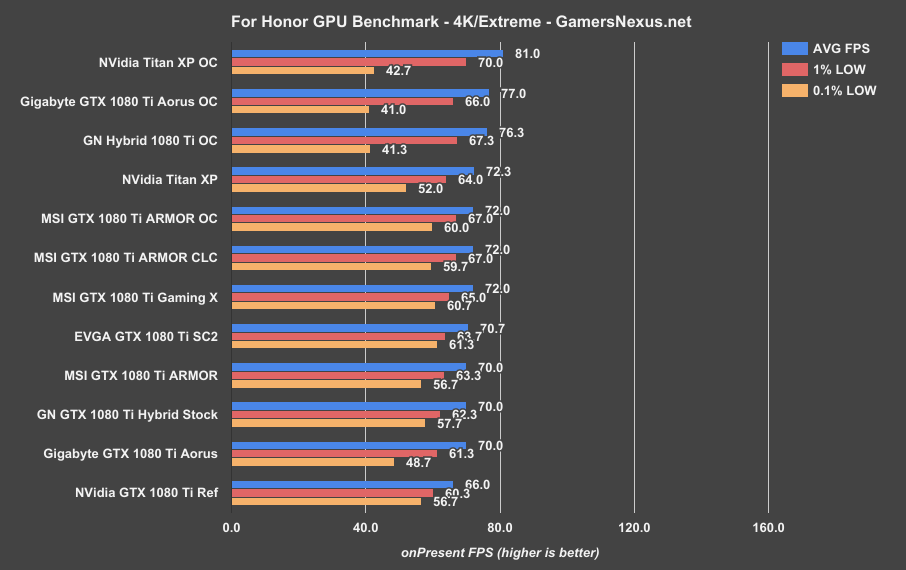 Here's the problem with the above charts: We don't get the full picture with a thermally challenged card. To truly see performance, we'd have to account for the fact that there's framerate degradation as the gaming session drags on -- you'll see a slight reduction in FPS over gaming sessions that last long enough to drive up the temperatures. As the fans start screaming to keep pace, there's also the noise concern, hence the huge focus on noise and temperature charts above.

Even with the thermal deficit, our framerate is somewhat comparable to most the other 1080 Ti cards -- as you’d expect, really. The biggest difference is that of noise and of efficiently dissipating heat, two things the Armor is not particularly competent with. That said, as a bare PCB, the Armor offers itself as what is effectively a Gaming X for $50 off. That discount makes the Armor an excellent candidate for liquid cooling or hard modding, as you get a good, custom PCB with a disposable cooler.

Out of the box, we wouldn’t recommend using the Armor cooler -- it’s really meant for a 1070, not a 1080 Ti, and that shows. Sticking the Armor into a case with higher ambient temperatures (it is not unreasonable for case ambient to be +10C over room temp) would further threaten performance and cause clock drops. The Armor is also limited in cooling potential -- it’s already at 80% for most of our numbers, leaving little room left to improve. If air cooling is your preference, it’s best to buy something else. An extra $20 for an SC2 Black Edition would be well worth it, though there are alternatives at $700 that can also work.

As a bare PCB for CLCs, though, the Armor is a good card. We’re just not sure if that was its intention. This is a good solution for folks intending to go with liquid, either through hybrid mods or with compatible water blocks. The air cooler will suffer when thrown into cases with a medium to high internal ambient temperature, and it is not unreasonable to see +10C internal case ambient given the right mix of components (or wrong mix, really). In these instances, clock dropping will be more exaggerated.