Almost every time we look at one of these cards, we’ve shown the impact on frequency by using a cooler more capable than some of its competition. In this case, we see frequency remains relatively stable, with minimal drop in clock-rate from the start point. There are a few hiccups at times, but nothing out of the ordinary for GP102. Frequency as a whole remains near-constant, and so will provide smoother and more predictable frametime performance.

Note, as always, that this chart is generated under a power virus scenario. That means that the frequency curve will appear lower than it would in a gaming workload. The clock is enumerated differently under power virus workloads, as the point is to generate maximum power throughput and stress, not to maximize the clock.

The SC2 and SC2 Hybrid are easily compared, given that their thermistors are located in the same places – though we did place our own thermocouples on each card in addition to EVGA’s NTCs. Our ability to compare these two cards directly is in contrast to the FTW3, which is not comparable in PWR component readouts given its completely different power design and NTC location on the board. 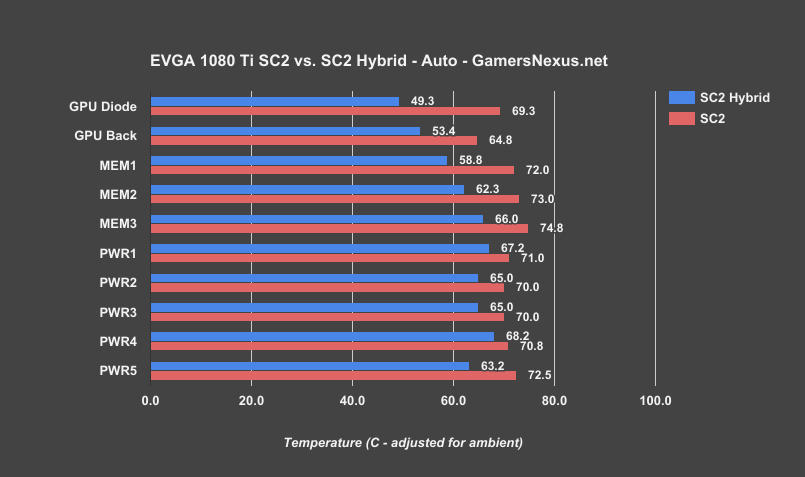 EVGA’s doing better with this generation of Hybrid cooling, and seems to have learned that running 100% radiator fan speeds at all times is not actually necessary. That’s reflected in these results, where we don’t see quite as big of a thermal improvement as in previous generations – but that’s because the noise levels are actually tolerable. This has been EVGA’s biggest weak point for a long time now, and they’re working to resolve the noise output while still meeting expectations thermally. The SC2 Hybrid looks to be about at the right place, ranking 20C lower than the SC2 in GPU diode readings, about 13C lower on MEM1, 10C on MEM2, and 9C on MEM3, with power component temperatures also down across the board.

Because we take thermals a lot more seriously than is common, it’s worth reminding everyone that we’re using thermocouple readers for a few things here: one is to validate the NTC readings, but another is to log room ambient, intake, and exhaust temperatures actively. We then apply a modifier to the values to normalize for ambient, but we’re not presenting them as a hard dT over ambient value here just because it’s easier for everyone to follow in this particular chart.

We’re moving now to our noise-normalized charts, where we configure the cards to run at a 40dBA output. This helps understand cooling efficiency per card, rather than just its stock performance. Stock performance, of course, is highly variable and will hinge completely on whether the manufacturer built for noise or for thermals. Here, we’re looking at strictly the cooling efficiency at a fixed noise output; we’re not normalizing for power, but perhaps in a future test.

Starting with GPU numbers, the EVGA 1080 Ti SC2 Hybrid is the second coolest on our charts, operating a sustained 24.9C delta T over ambient. This places the card about 20C cooler than the FTW3 ($780) – though the FTW3 had some testing caveats that we detailed in our unveiling of this method, primarily that we configured the fans to asynchronous speeds. The Xtreme Aorus card is nearby, with the Gaming X ($750) still showing the prowess of MSI’s Twin Frozr dual-air cooler design. ASUS keeps hold of the “best efficiency for an air cooler” title, and is outranked by about 6C with EVGA’s SC2 Hybrid. The Armor is the worst card we’ve tested when air cooled, but its Gaming X PCB makes it an excellent candidate for H2O. The Armor CLC uses a 570LC and Gentle Typhoon fan, but there’s something more important: EVGA is sharing its liquid cooling solution with a copper plate that conducts from the VRAM, increasing the heat load relative to the constant heat dissipation. We are increasing our heat load by approximately 15W by doing this.

But that’s just the GPU.

Moving now to power component temperatures, we see the SC2 runs a warmer VRM target than its neighbors, at 42.2C delta T over ambient. This is near the Gaming X and FTW3. This is another situation like the FTW3 review, where we could have configured the VRM fan to run faster while the radiator fan could run slower, but we ultimately decided to follow EVGA’s own fan curve. That curve dictated roughly a 28% VRM fan RPM under load, which fit well with our 70% radiator fan RPM for a 40dBA output. Performance is neither impressive nor bad. We are way within spec for these FETs, even measuring an effective case temperature.

Finally, here’s a look at VRAM. The SC2 Hybrid manages to keep the lowest VRAM temperature, largely thanks to EVGA’s decision to cool the VRAM via copper plate that contacts the CLC. 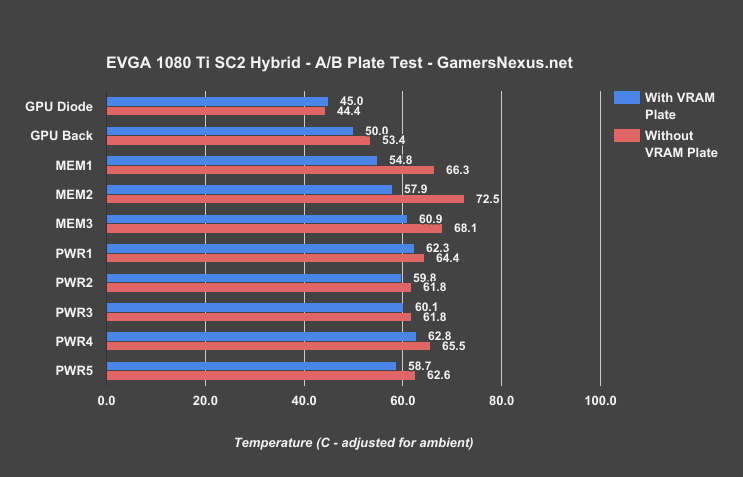 But we were curious about the impact of the copper plate at all, and so ran some A/B tests with it removed. The radiator fan was configured to 100% for these, with the VRM fan at 28%.

Finally, here’s a look at the noise output versus various RPMs on the radiator and VRM fans. Under auto settings, the EVGA card tends to stick just under or right around 40dBA, +/- 3dBA depending on load. We still think EVGA could improve their noise with these cards, but it does start to enter territory where your temperatures run higher for lower noise, and that might not reflect well in less scrupulous reviews or with more casual users. 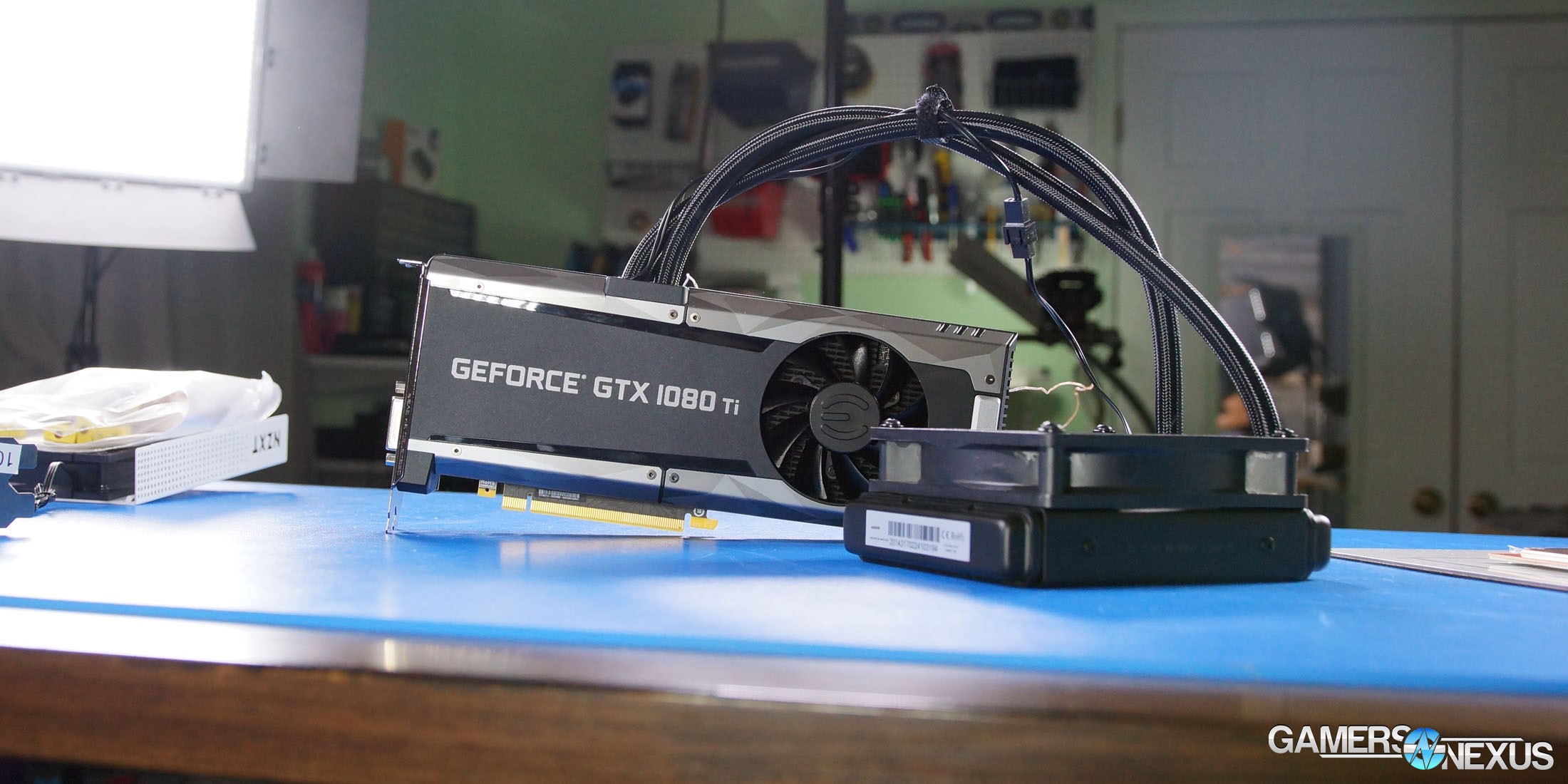 As stated clearly in the video, our conclusion with this card is simple: It’s $810, which means a lot of people are immediately priced-out. And that’s fine, because if what you want is strong gaming performance, that can be had with EVGA’s $720 SC2 Black (or almost any other non-Armor card, for that matter). The extra expense on something like the SC2 Hybrid is only ever worth it if noise is high on the list of concerns. For someone seeking a high-performance system with low noise, we’d suggest the following: Buy an SC2 Hybrid or similar liquid-cooled solution, then swap radiator fans and plug directly into the motherboard. At this point, configure the fan speed in BIOS to something between 40% and 70%, then let it sit there forever.

EVGA has gotten a lot better with its fan profile management on these cards. They’re no longer blasting the fan at 100%, but it’s still loud as it slaves to liquid temperature in the pump block, and that’s sort of a useless thing to do. That said, it’s the best they’ve got given that Asetek ultimately limits EVGA, here. The end result is a GPU radiator fan that’s often at 70-80% and a VRM fan that’s often at 28%, resulting in a dBA range of ~40~43dBA. Because the GPU is still plenty cool, you could manually drop fan RPM (and increase temperature a bit) to get below 40dBA. Thermals will still be perfectly fine, but noise will now be a consistent, unchanging frequency and a lower decibel output. That’s how these cards are supposed to be used.

EVGA could still improve some things, but a lot of those won’t change until after the generational jump to Asetek 6th Gen. Until then, we’d like to see the company lengthen the fan cable included with the radiator fan, that way users can manually route it to the board (rather than ditching it), if desired. Or just include an extension cable, maybe.

Otherwise, it’s a well-built card – it’s just not worth it for the vast majority of buyers. For folks who are very focused on low noise and high-performance cooling, this is potentially a worthwhile investment.