We previously ran an introductory piece to the behind-the-scenes process of trying to figure out VR testing, something we started in September. To go through some of the basics:

Two rigs are established. There is a game benchmark machine and a hardware capture machine, which must meet high specifications for storage and for incoming data from the split headsets. The configurations are as follows:

Our hardware capture system is as follows:

The hardware capture system is the most important. We need to sustain capability to process heavy IO, and so use an Intel 750 SSD 1.2TB SSD as provided by our friends at BS Mods. The 1.2TB capacity isn’t just for show, either: Our VR capture files can take upwards of 30-50GB per capture. GamersNexus uses an in-house made compression script (programmed by Patrick Lathan & Steve Burke) to compress our files into a playable format for YouTube, while also allowing us to retain the files without high archival storage requirements. The files compress down to around ~200~500MB, but do not perceptibly lose quality for YouTube playback.

Prior to compression, though, we analyze the files with an extractor tool, which looks at color overlays frame-by-frame to determine (1) if any frames were dropped by the capture machine (they never are, because our storage device is fast & $2000 capture card supports the throughput), and (2) if any frames were dropped by the game machine. The latter happens when the DUT cannot support fluid playback, e.g. if a low-end GPU or CPU gets hammered by the VR application in a way that causes drop frames, warp misses, or other unpleasant frame output.

In total, it’s about ~10 cables in true octopus fashion to connect everything. The cables must be connected in the correct order to get everything working. No output will go to the HMD if they are connected out of sequence.

The gaming machine, meanwhile, is running FCAT VR software capture to intercept frame delivery at a software-level, which then generates files that look something like this: 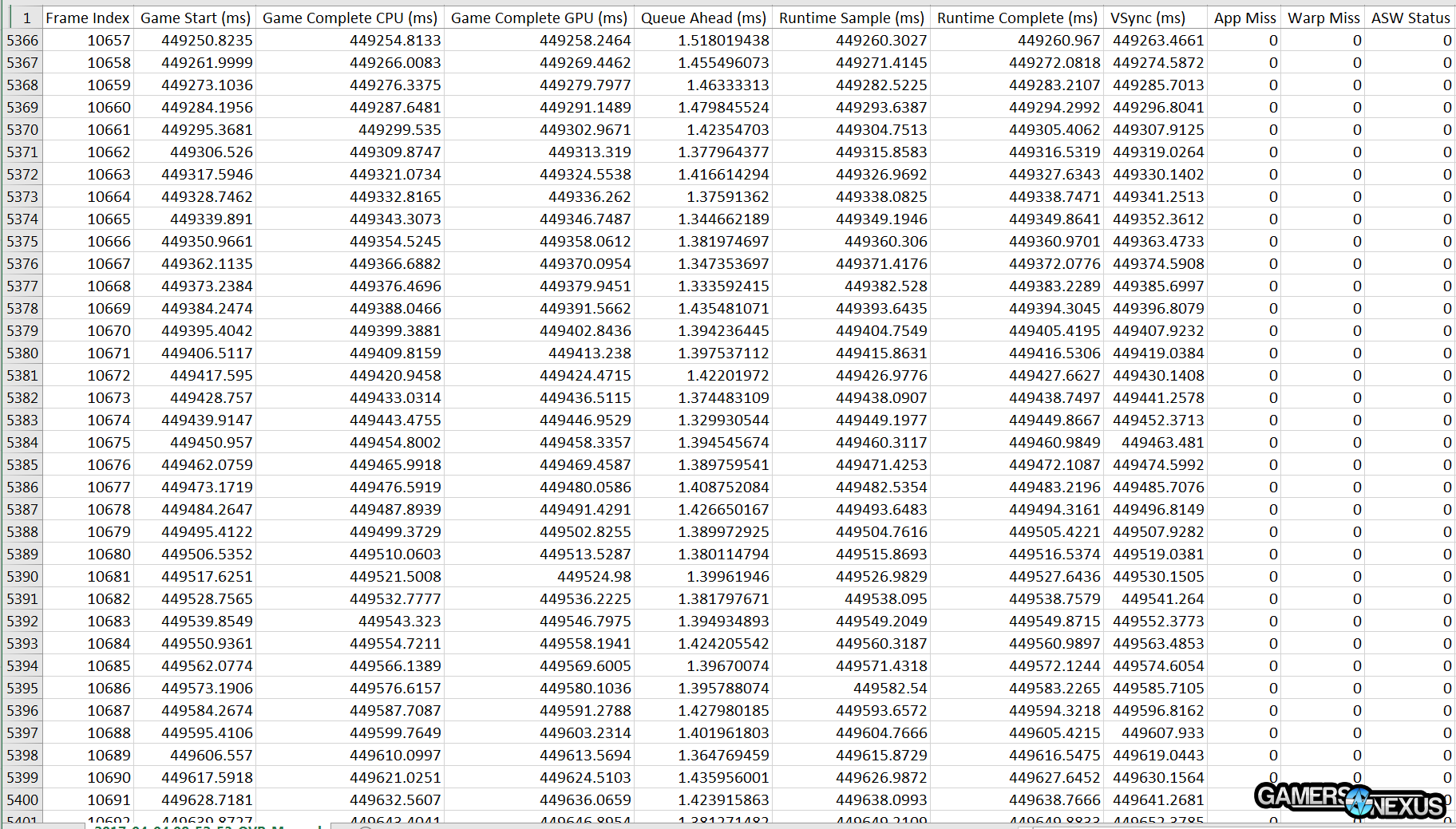 Each file contains tens of thousands of cells of data. We feed this data into our own spreadsheets and into FCAT VR, then generate both chart types from that data. The hard part, it turns out, is still data interpretation. We can identify what a “good” and “really bad” experience is in VR, but identifying anything in between is still a challenge. You could drop 100/m frames on DUT A and 0 on DUT B, and the experience will be perceptibly/appreciably the same to the end-user. If you think about it, 100 dropped frames in a 5400-interval period is still about 1.85% of all intervals missed, which isn’t all that bad. Likely not noticeable, unless they’re all clumped together and dotted with warp misses.

We still haven’t defined those terms, so let’s do that.

Drop Frame: When the VR runtime takes the prior frame and modifies it to institute the latest head position. The VR HMD is reprojecting or adjusting the prior frame, but failing to update animation in time for the next runtime hit. With regard to animation, this is a dropped frame. With regard to user experience, we are updating in a way that avoids inducing user sickness or discomfort (provided there aren’t too many in rapid succession). We can get synthesized frames out of this.

Warp Miss: The VR HMD has missed the refresh interval (90Hz, so every ~11ms +/- 2ms), and doesn’t have time to show a new frame. There is also not enough time to synthesize a new frame. We’ve instead replayed an old frame in its entirety, effectively equivalent to a “stutter” in regular nomenclature. Nothing moves. Animation does not update and head tracking does not update. This is a warp miss, which means that the runtime couldn’t get anything done in time, and so the video driver recasts an old frame with no updates.

Unconstrained FPS: A convenient metric to help extrapolate theoretical performance of the DUT when ignoring the fixed refresh rate (90Hz effective v-sync) of the HMD. This helps bring VR benchmarks back into a realm of data presentation that people are familiar with for “standard” benchmarks, and aids in the transition process. It’s not a perfect metric, and we’re still in the air about how useful this is. For now, we’re showing it. Unconstrained FPS is a calculation of 1000ms/AVG frametime. This shows what our theoretical frame output would be, given no fixed refresh interval, and helps with the challenge of demonstrating high-end device advantages over DUTs which may otherwise appear equivalent in delivered frame output.

Average Frametime: The average time in milliseconds to generate a frame and send it to the HMD. We want this to be low; ideally, this is below 11ms.

Warp misses are miserable experiences, particularly with multiple in a big clump. Warp misses intermixed with drop frames illustrate that the hardware cannot keep up with the game, and so the user experiences VR gameplay that could feel unpleasant physiologically in addition to mechanically.

Learn more about these definitions here, in our previous content. We also spoke with Tom Petersen about these terms.

Continue to the next page for i7-7740X thermal benchmarks.