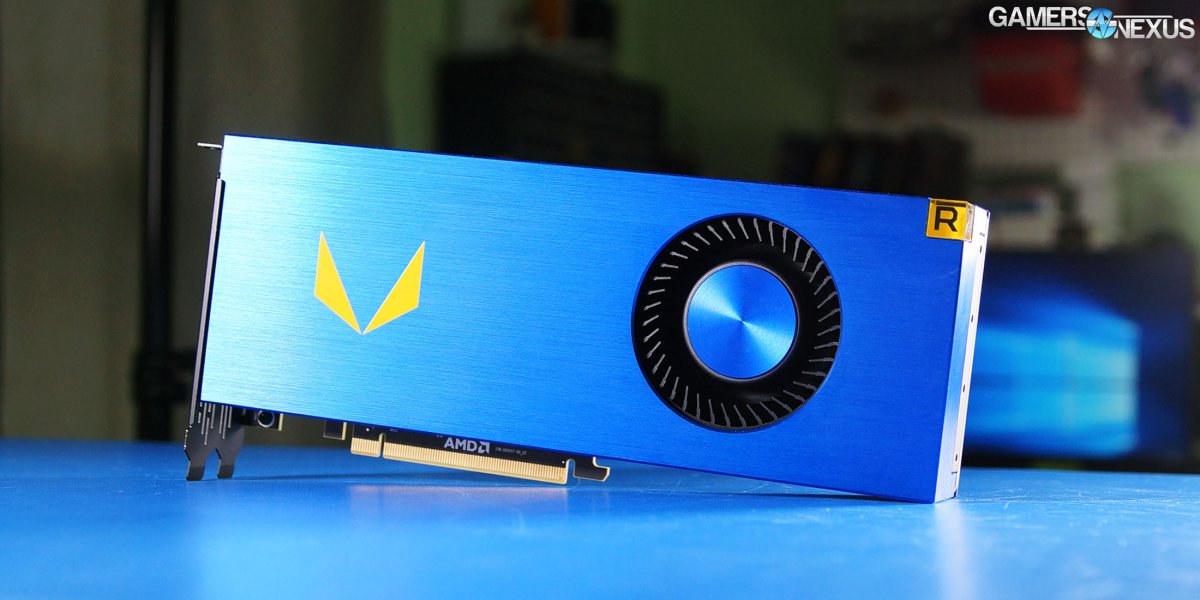 Getting to gaming and synthetics, we start first with FireStrike to provide a baseline for performance. With FireStrike Ultra, we see Vega: FE ($1000) place at 4906 points when stock, which ranks it about 2.4% behind the GTX 1080 Founders Edition card, with the GTX 1070 Founders Edition card about 15.6% behind the Vega: FE card. Aftermarket models will obviously score higher, but we’re focusing on reference for today. 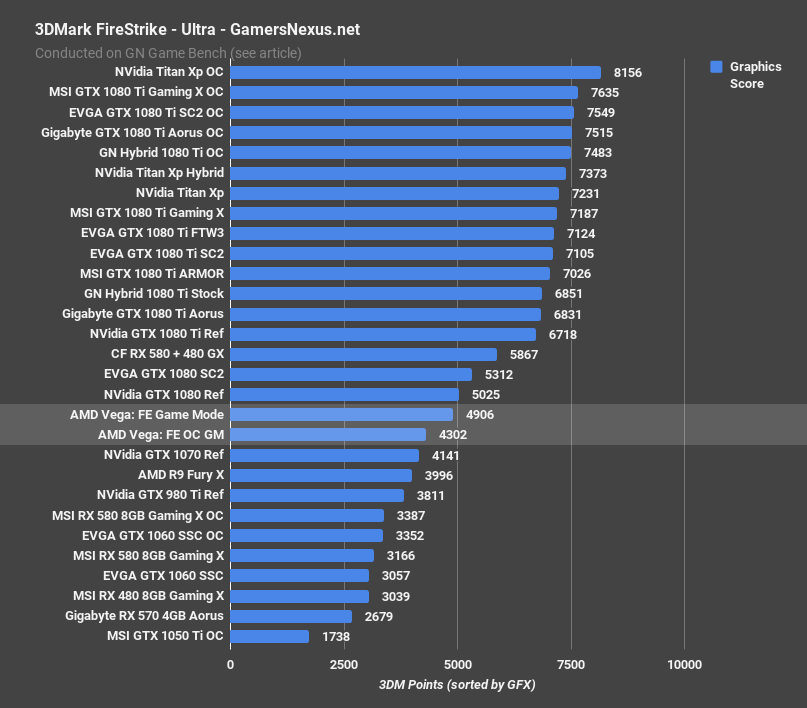 As shown in the charts, the overclocking issues we faced on Vega ended up lowering performance, not raising it. We think this is primarily due to the HBM clock bug in WattMan that drops the reported clock by 445MHz, but we’re not positive; we’ve reached out to AMD and haven’t received an answer specifically addressing this issue. For the rest of the charts, now that we’ve illustrated the bug, we’ll leave OCing out. 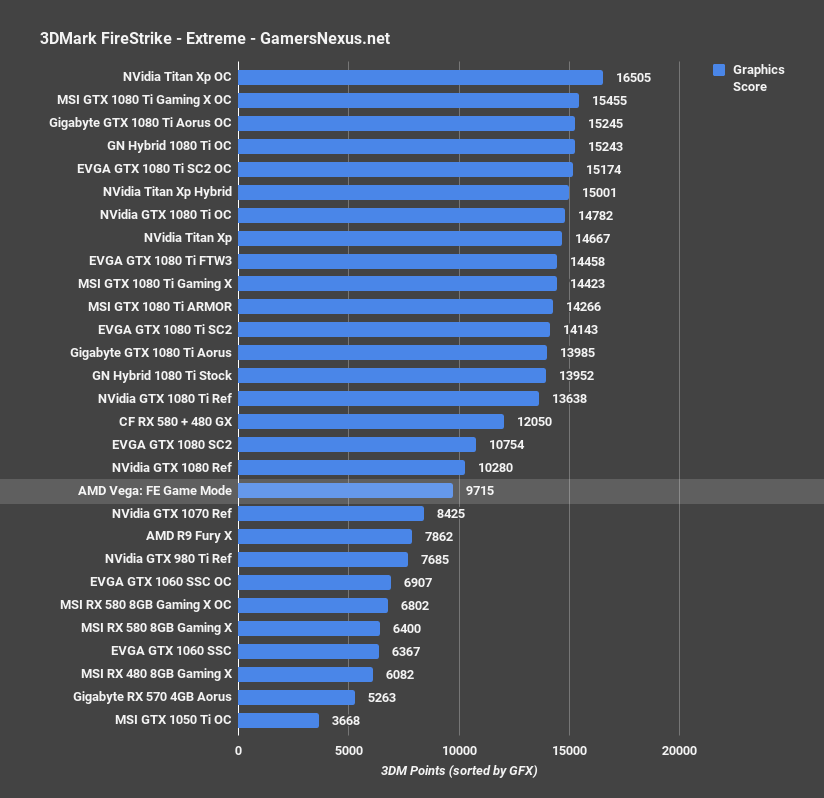 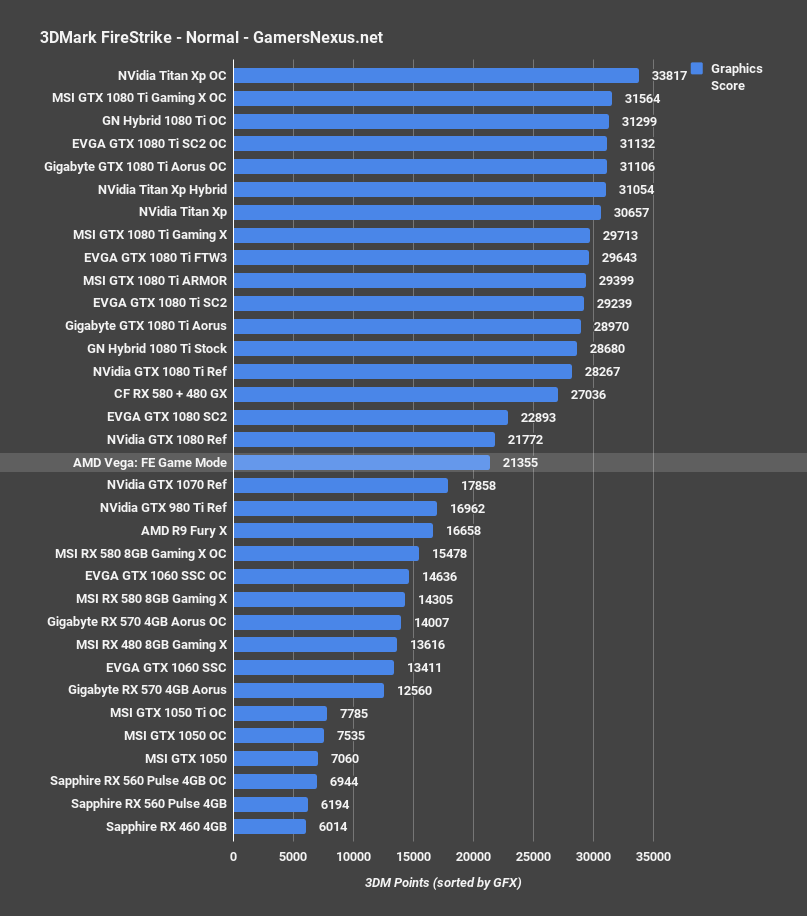 Here are the corresponding FPS numbers, for perspective: 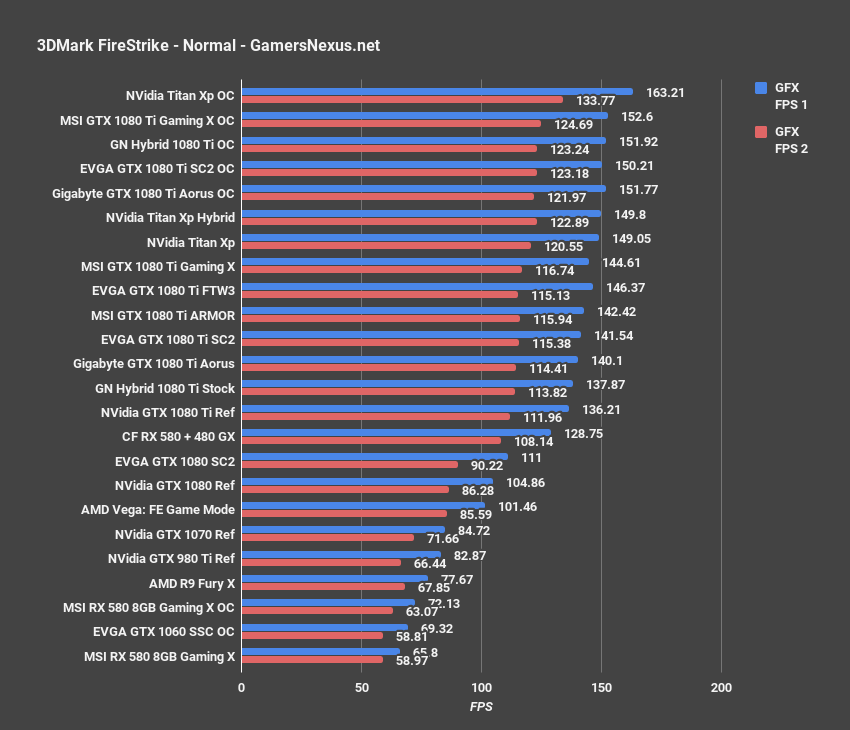 And TimeSpy with AMD Vega: FE: 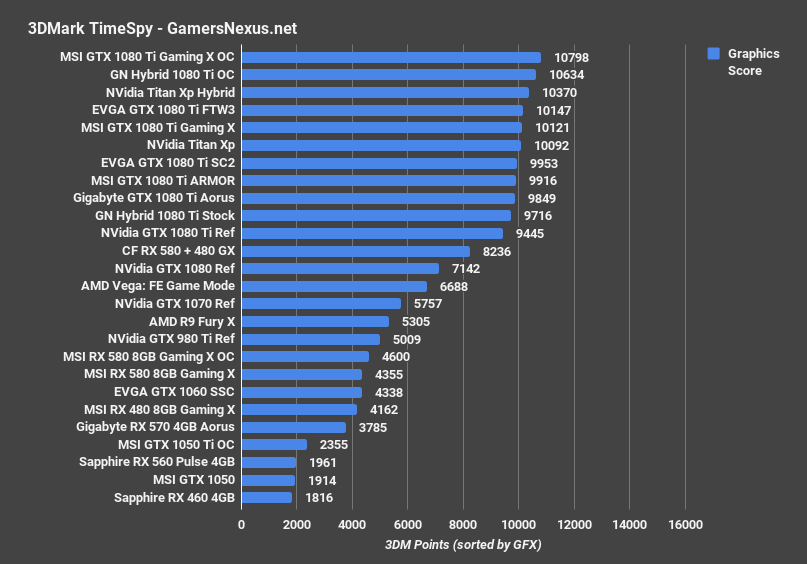 For gaming, let’s start with AMD’s most favored benchmarking scenario, then move on to other games: 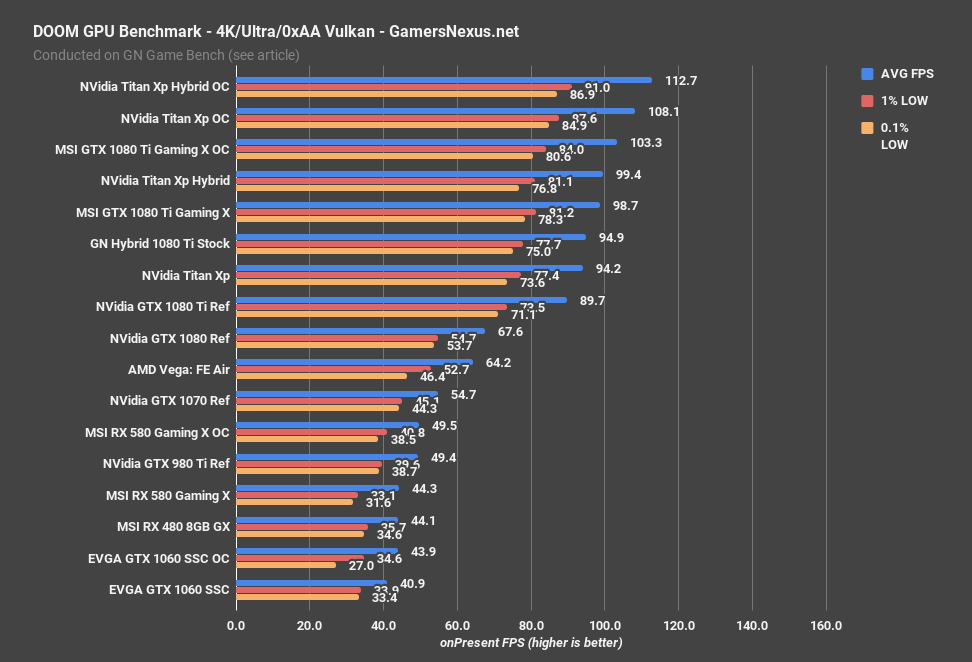 With DOOM at 4K and Ultra settings, using async Compute and Vulkan, the Vega: FE card operates an AVG FPS of 64.2, which places it slower than a GTX 1080 FE by 5%, slower than a 1080 Ti FE card by 28%, and slower than a Titan Xp by 32%, due to the thermal limiter. Going to a Hybrid mod brought the Titan Xp performance much higher, as we showed several months ago, and using a 1080 Ti Gaming X also increases performance somewhat significantly over the Ti FE. 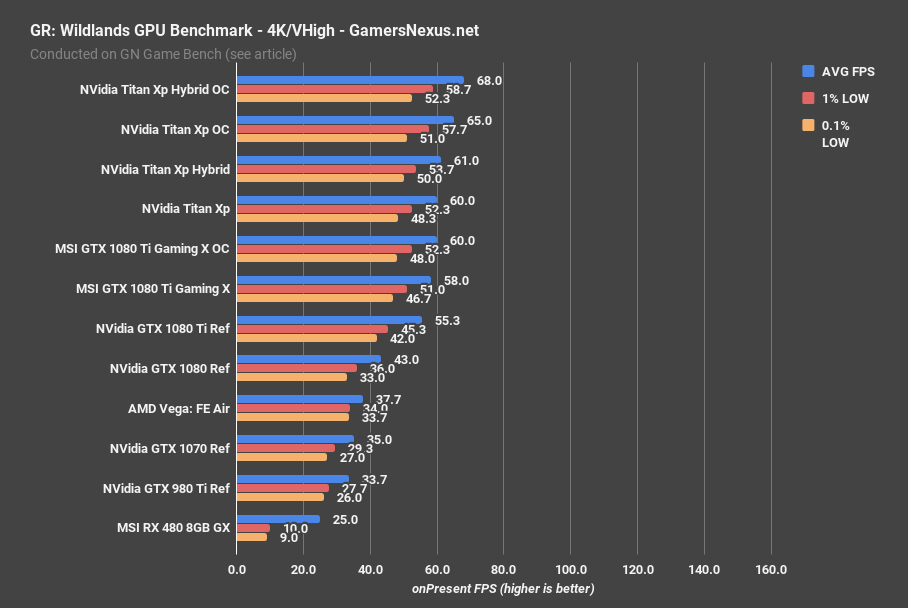 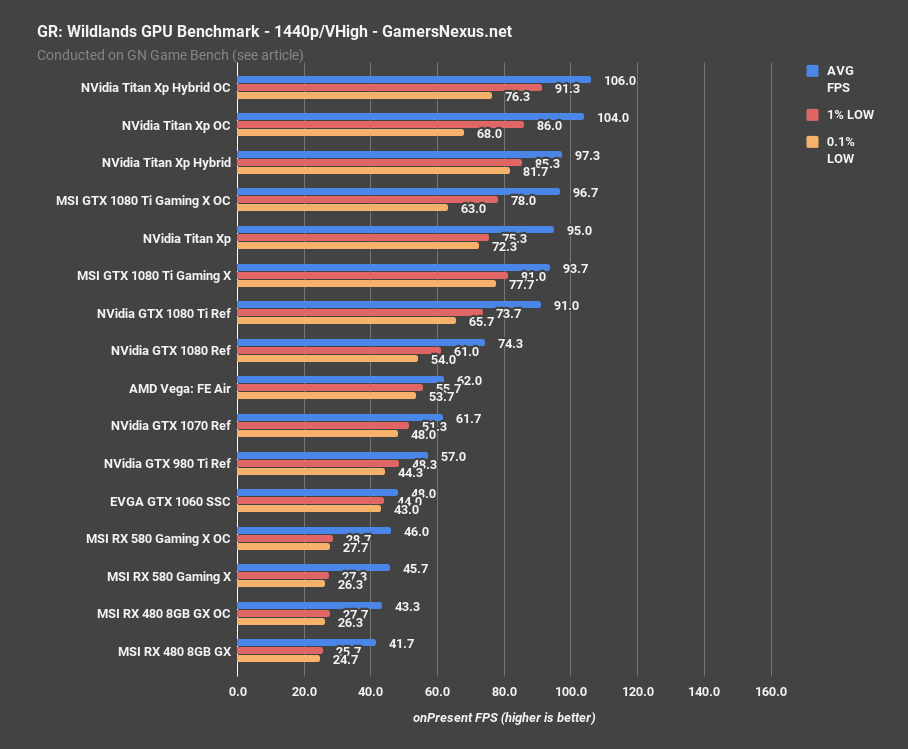 At 1440p, the Vega: FE card manages to maintain 62FPS AVG, which marks it about tied with a GTX 1070 in AVG FPS. Vega’s low-end performance is still remarkably consistent, here, but the card clearly struggles in averages to keep up in gaming workloads. Not really the target use case, as we discussed on page 1. A 980 Ti runs about 8% slower than Vega: FE. The 1080 Ti cards are all in the 90s, alongside the Titan Xp, marking Vega: FE about 32% slower than the slowest 1080 Ti. 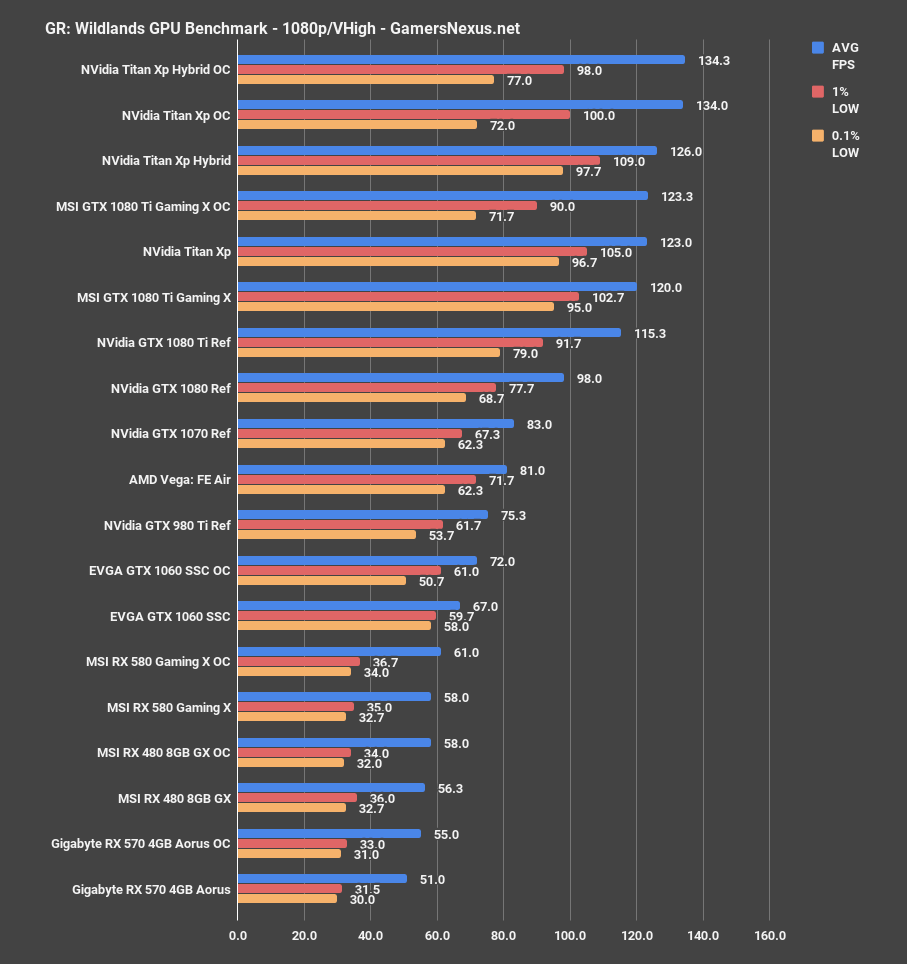 Here's For Honor at 4K. Forgot these tests on first upload -- thanks, commenters: 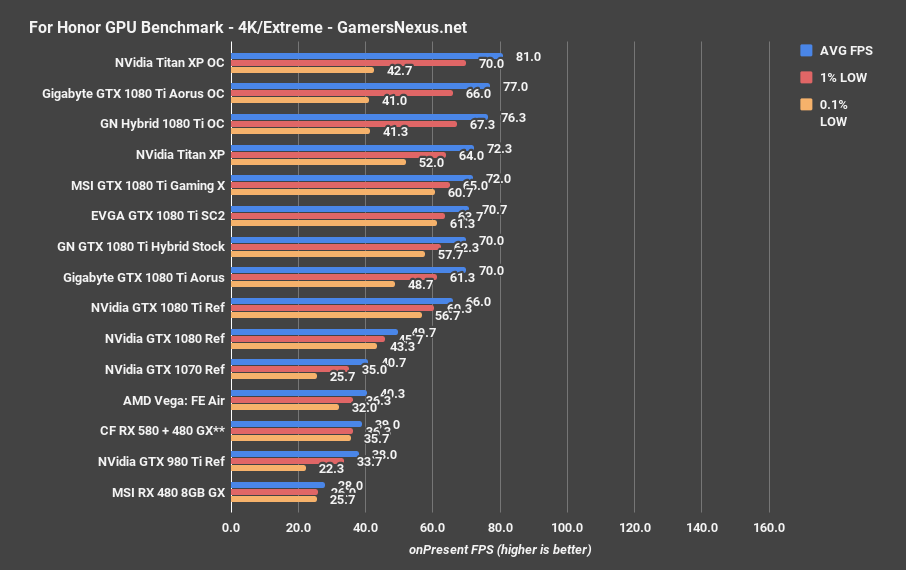 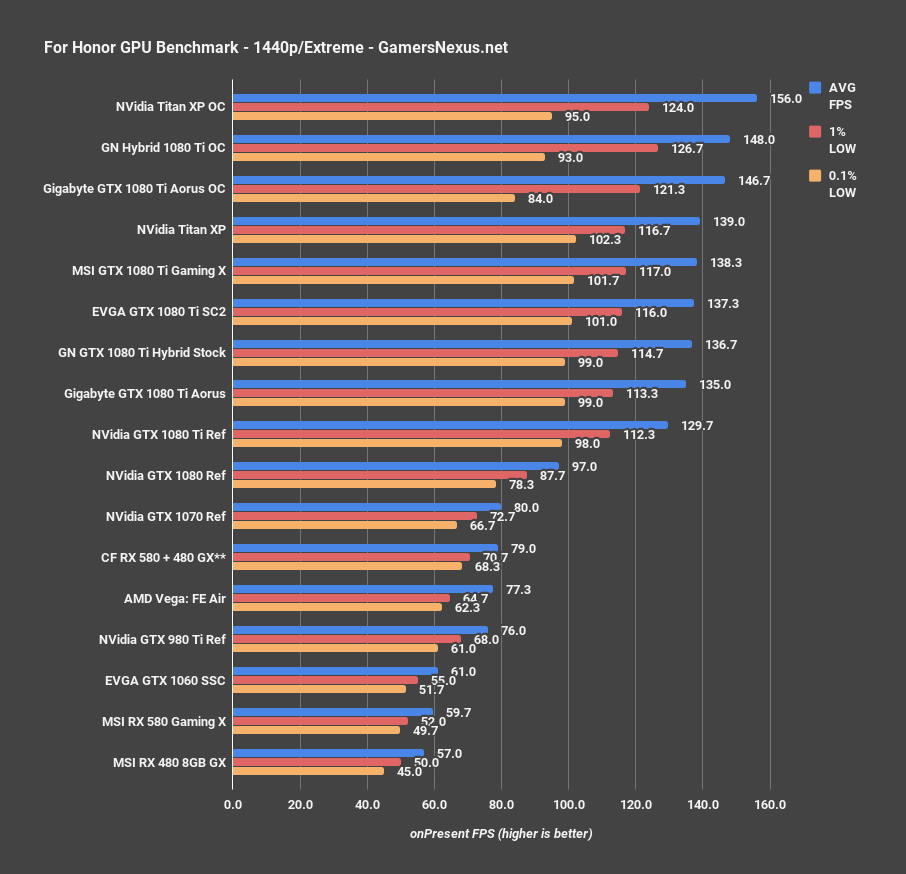 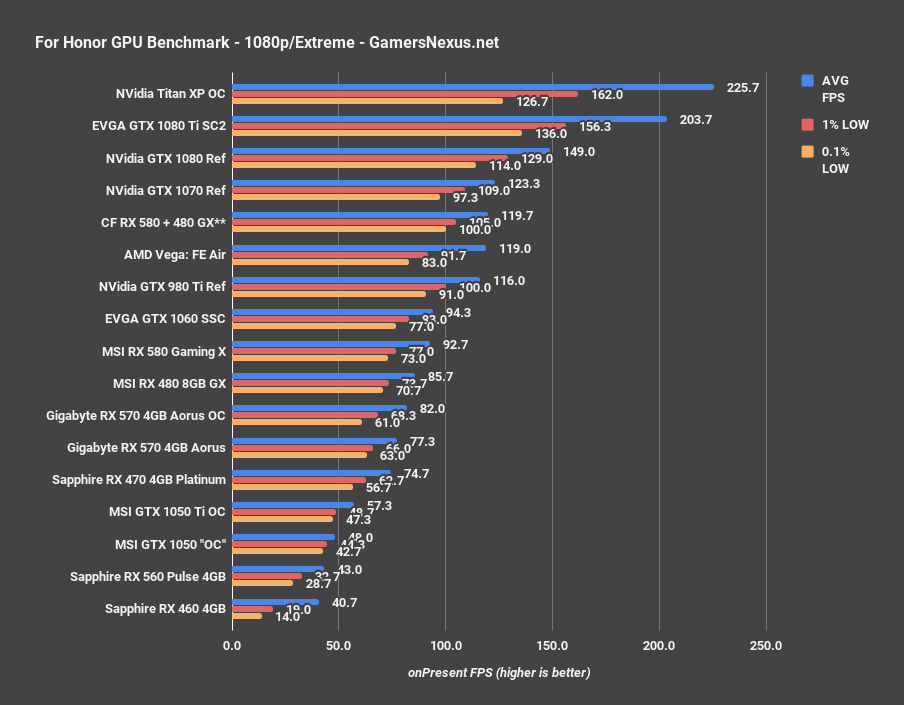 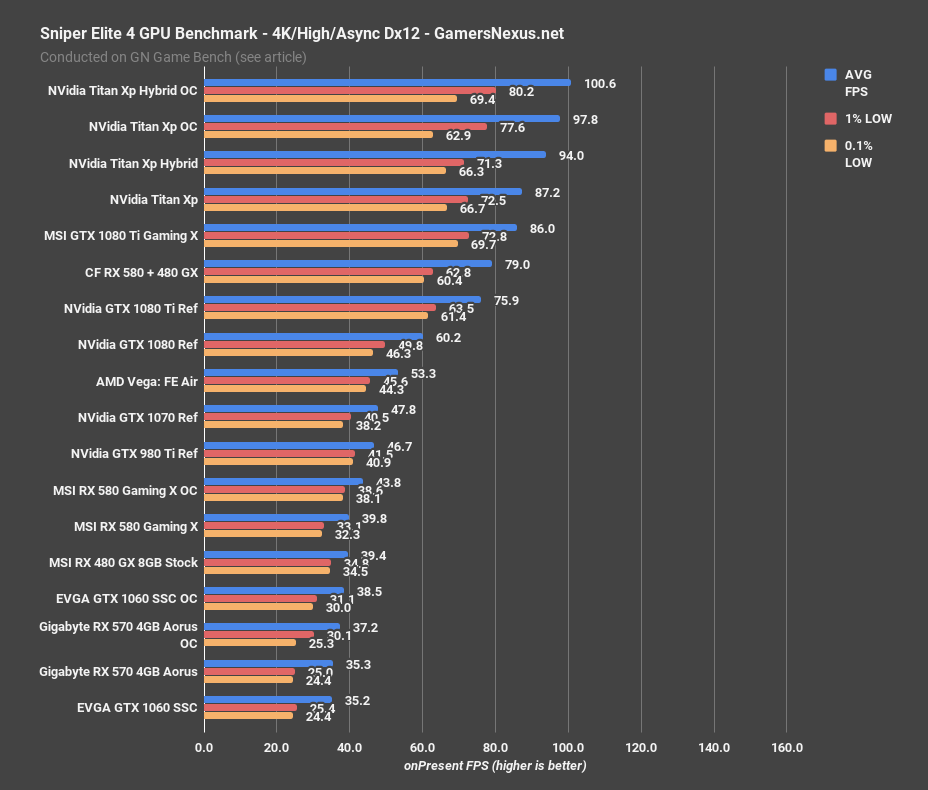 Let’s move to another benchmark that’s historically been favorable to AMD. In Sniper Elite 4 with DirectX 12 and async Compute at high settings and 4K, Vega: FE operates a 53FPS AVG, with lows close by. This marks the GTX 1070 FE card 10.3% slower and marks Vega: FE about 11.5% slower than the GTX 1080 FE card, or about 30% slower than the 1080 Ti FE card. Moving to a Titan Xp, that difference becomes 39% slower on Vega FE. 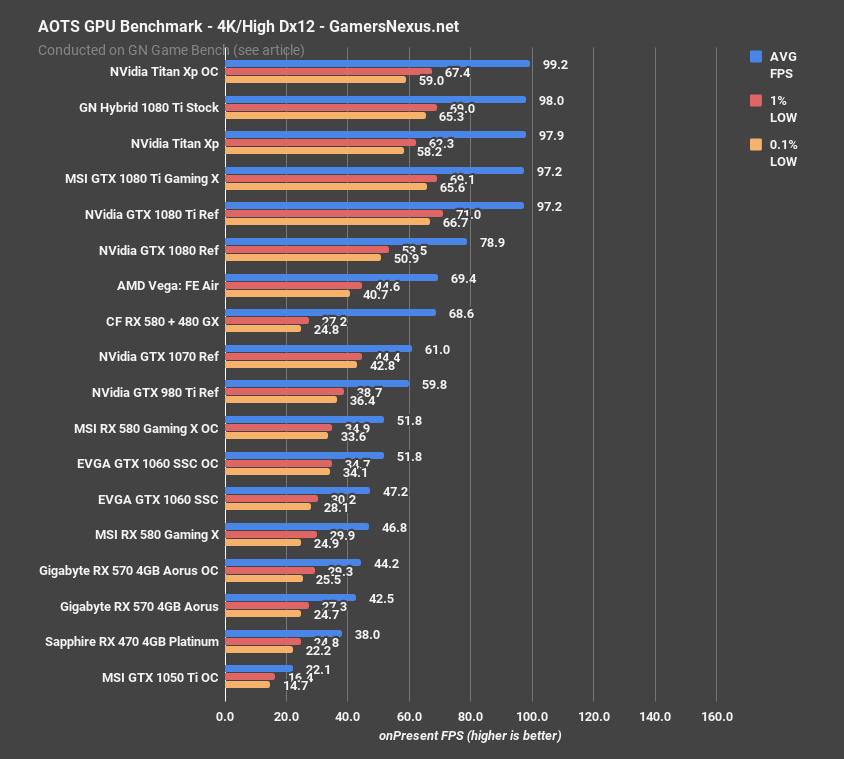 Continue to the final page for the conclusion, power, thermals, & noise.