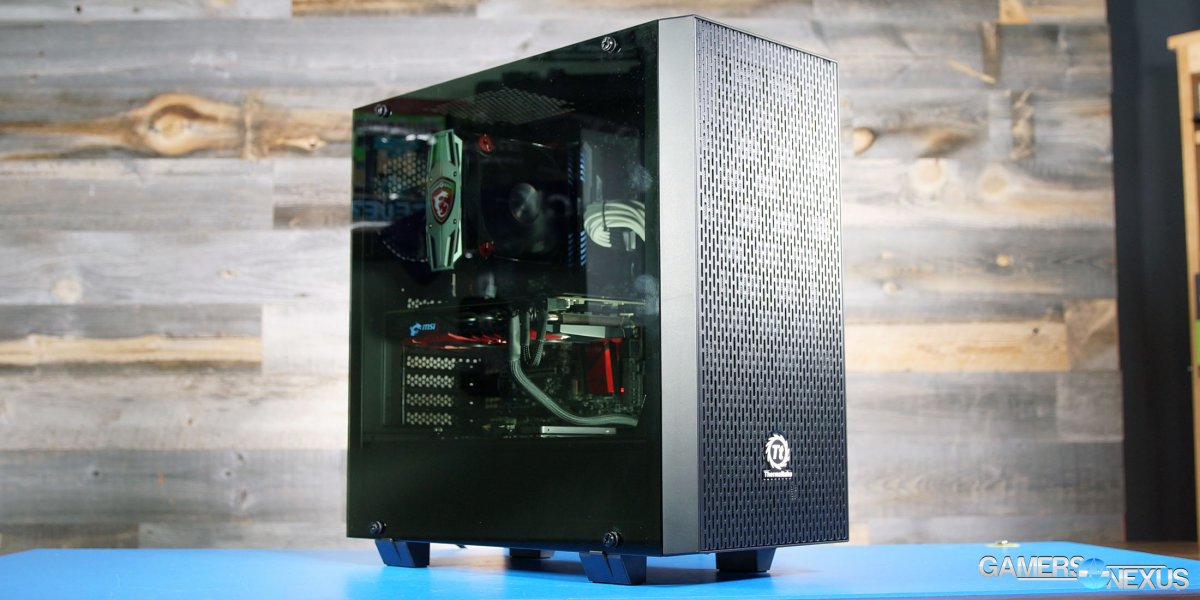 We first wanted to establish an understanding for how the Thermaltake Core G21 TG performs standalone; after initial torture tests, we ran additional configurations that involved new fans, removal of dust filters, and reconfiguration of the front of the case. We’ll get to comparative benchmark results next. 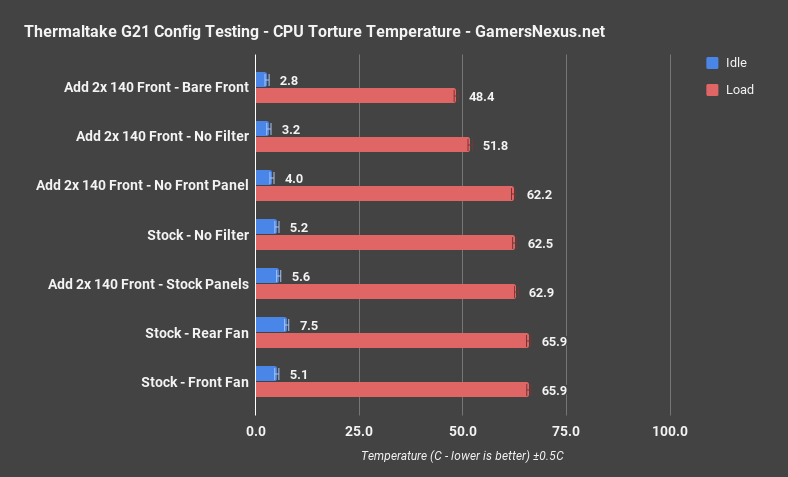 During our torture workload that burns the CPU and GPU simultaneously, the stock configuration of the case with a single rear fan and both front dust filters produced a load temperature of 65.9C delta T over ambient. Idle rested at 7.5C delta T. With an ambient of about 23-24C, that puts you just under a CPU temperature of 90C on our test bench. Definitely a bit warm.

In an effort to understand why temperatures were so high on a case that has good ventilation, we next added two AF140 Corsair front fans alongside the rear exhaust fan. The result wasn’t much better – we only improved our CPU load temperature by 3C, with idle improved by about 2C.

This puzzled us, and so we set forth on a mission to perform far more tests than we’ll ever get ROI for on this review. Removing the front panel was next, which improved our temperatures by 3C to 62.5 in the stock single-fan configuration, and barely changed anything in the dual-intake configuration. We next removed the magnetic dust filter behind the front panel, then put the front panel back on – finally, the root cause of the issue. Removing the magnetic dust filter improved our CPU thermals from 62.9C delta T with the dual-intake configuration to 51.8C delta T. That’s a massive jump of 11C, and is one we were able to validate repeatedly. For the stock configuration with only one exhaust fan, we saw a change from 65.9C to 62.5C – still an improvement, but given that there are no intake fans to choke, the change is less significant.

Removing both the filter and front panel gives us our bare front configuration, which still sees a boost – but not enough of one to be worth removing the somewhat required front panel. Removing the optional dust filter is absolutely worthwhile, though. 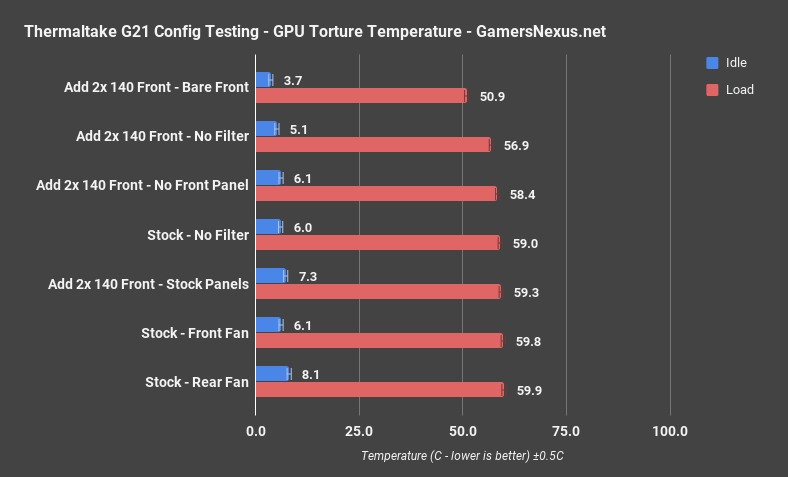 GPU thermals improved similarly. We were throttling hard in most of these test configurations, as the throttle point is 82-84C, and we were at 59C delta T. That’s the choke point. It wasn’t until we removed the magnetic dust filter and added some fans that the GPU was able to cool itself down in this torture workload. Once we got rid of the front filter, it performed to spec and stayed below throttle territory.

When we asked Thermaltake about this and validated our testing results, the company noted that they’d rather include extra dust filters that are removable, as it’s harder for the end-user to source an appropriately-sized dust filter than to remove one. Although this is a marketing response, it’s at least one that makes sense -- the decision just becomes a question of “why include a dust filter if the intended use is its permanent removal?”

Our comparative testing starts with torture workloads, then moves on to Blender and 3DMark for realistic workloads. 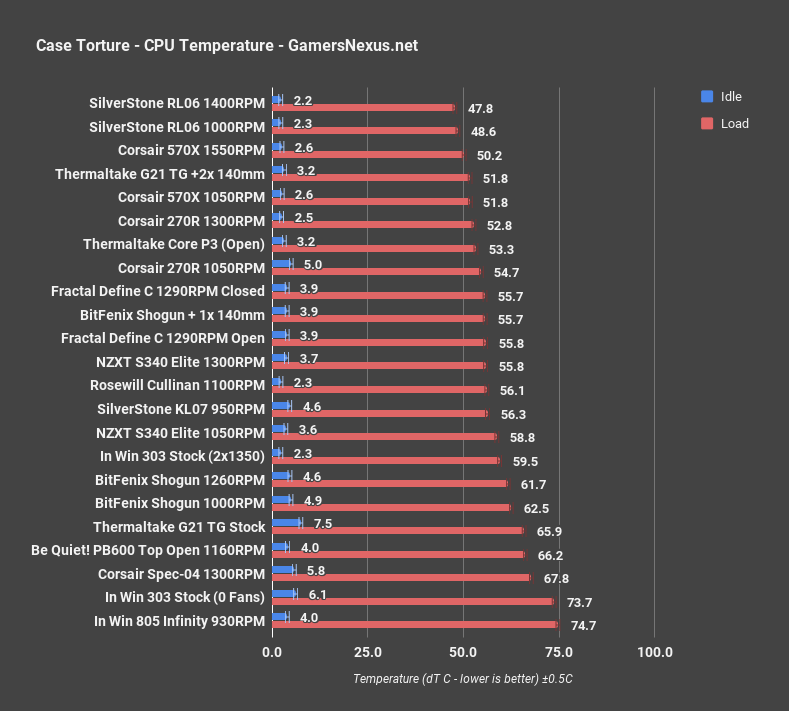 With a torture load on the CPU and GPU, the Thermaltake Core G21 TG stock case performs about where the Be Quiet Pure Base 600 did – but the Be Quiet! case is the most noise-suppressed we’ve tested, so that’s not a linear comparison. We’re between the Shogun and the Spec-04, ultimately. Adding two fans and removing the dust filter really shows the potential, bringing us up to 51.8C dT, or on-par with a $180 Corsair 570X case that includes three front fans. Not bad for the $70 unit, though cost goes up about $15 once we account for the fans added. We’re also near the 270R, a price-competitive case that forgoes the tempered glass, and Thermaltake’s open-air Core P3.

The G21 really has serious potential to be competitive on the cooling front, it’s just stifled by its stock configuration. Minimally, this lends hope that, given the case’s already strong feature set, some extra purchases can help resolve a critical error on Thermaltake’s part. Just account for this mentally by adding $15-$20 to the case’s cost to resolve its thermal limitations. 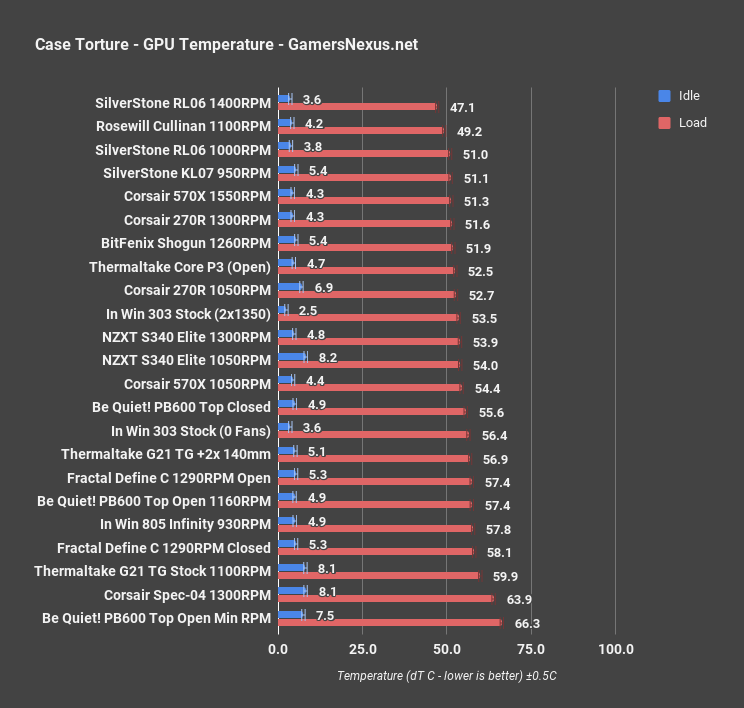 Looking at GPU comparative temperatures, the Thermaltake Core G21 ends up slightly less bad than the Corsair Spec-04, and about on-par with Fractal’s Define C case – another warm case on the bench when in stock configuration. Removing the dust filter and adding fans doesn’t help as much here, bringing us down to 56.9C dT, but it’s a start. These thermals could be brought down further by manually configuring a GPU fan curve that’s more aggressive and slightly louder. 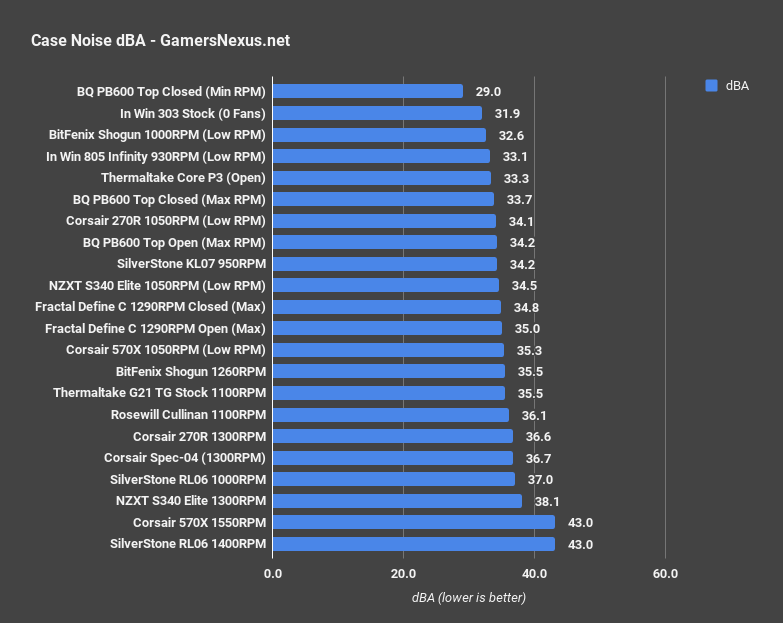 Speaking of, here’s what the noise levels look like: We’re at about 35.5dBA in the stock configuration which, albeit warm, isn’t too bad on the noise scale. This puts the case near the Corsair 270R and Fractal Define C with max RPMs and an open top.

Back to thermals and frequency for a few more charts, a CPU Blender workload gives us a realistic scenario with no load on the GPU. Here, we’re running a CPU dT of 39.3C, which sits the case near the KL07 and well ahead of the Corsair Spec-04 $50 case.

A Blender GPU workload pins the GPU at 32.5C dT, which isn’t throttling, at least. It’s also not great, sitting between the KL07 and Spec-04. Lots of room to improve here for Thermaltake.

Finally, looking at 3DMark, we’re not hitting CPU issues at all with a 35.7C dT output – though it’s warmer than the KL07 by a good bit – but GPU temperatures are around throttling point once again. We can show a frequency plot to illustrate the clock decay over time as the case permits temperature to warm up to 82C on the GPU, resulting in noticeable clock drops that would impact FPS. 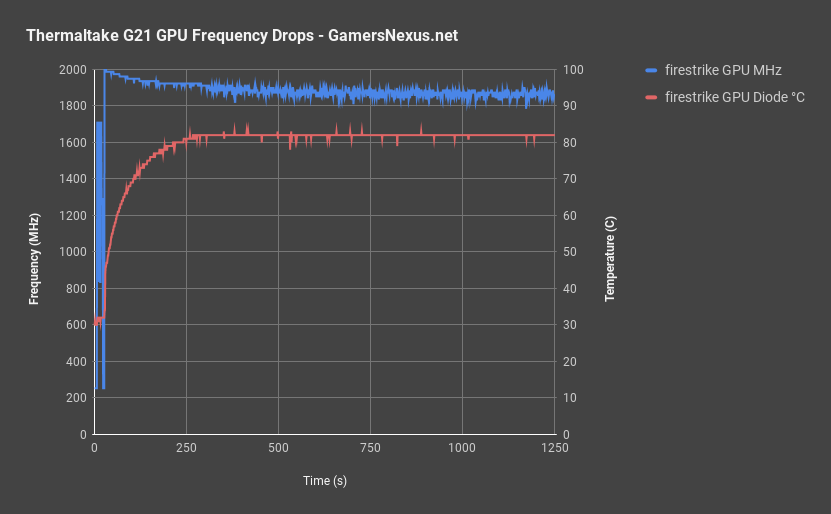 Thermaltake’s Core G21 enclosure is a mix of good chassis design and bad thermal engineering. The case hosts excellent cable management features -- some of the best in its price category -- and even manages to stick two tempered glass side panels on there. Say what you will about the TG trend, getting two panels on a $70 enclosure is one of the next big things in case design, and Thermaltake is among the first to do it. The mesh front also aids with airflow, and is a rarity among modern cases. 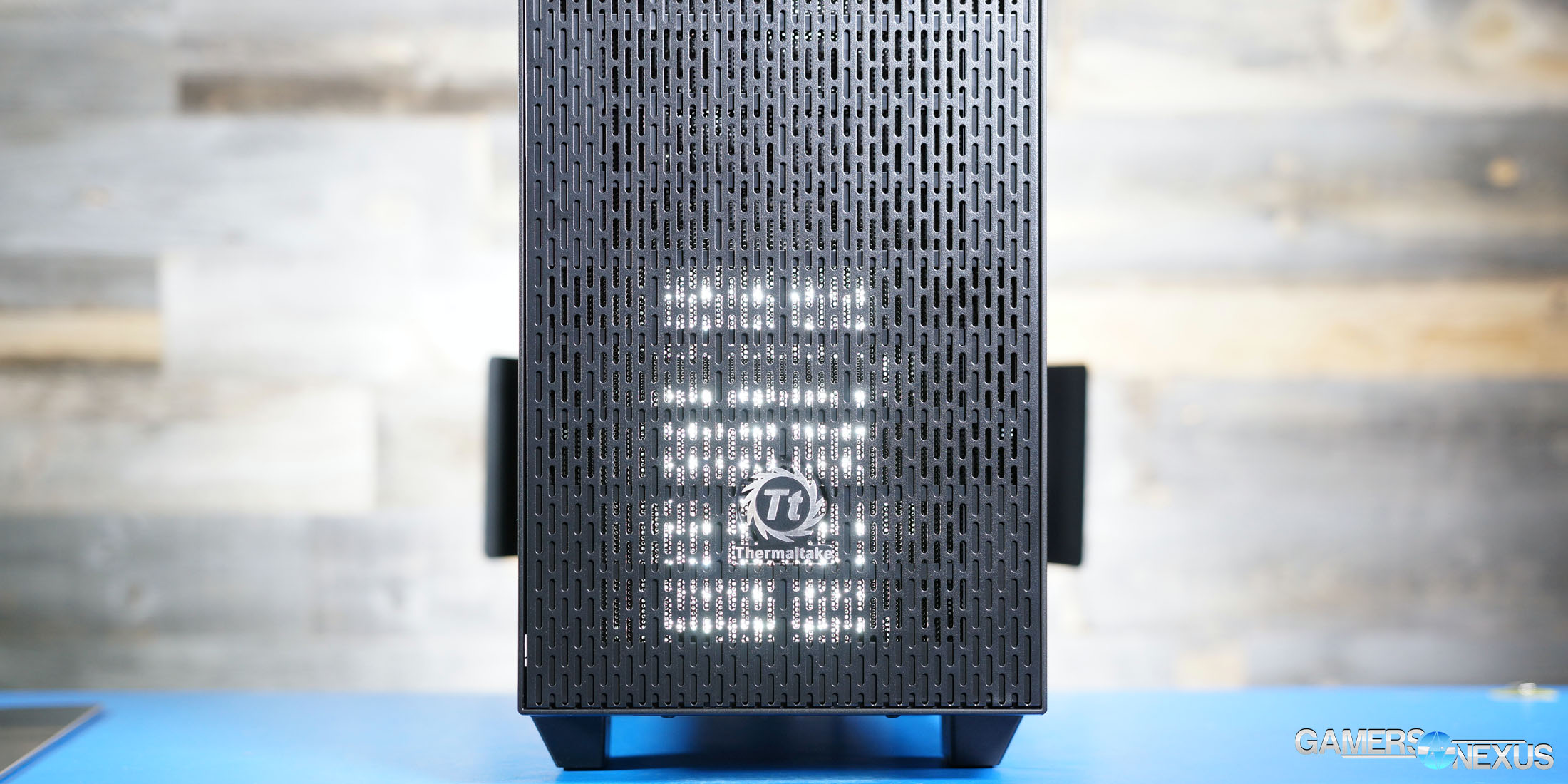 But Thermaltake completely botches the thermals. The presence of 2.5 dust filters eats away all of the cooling potential from additional intake fans, to the point that we strongly recommend removing the magnetic dust filter upon purchasing the case. The case also includes just one fan -- which is potentially fine -- that happens to be extraordinarily cheap and, for some reason, is positioned as rear exhaust.

Noise is actually pretty good. The enclosure as a whole, actually, is pretty good. This one aspect just sort of ruins an otherwise clean record. We can recommend the case partially, and with these conditions: (1) Remove the magnetic dust filter immediately for noticeable performance improvement, (2) add a fan to the front to get some air into the thing -- Thermaltake has all this mesh real estate, a real advantage, and doesn’t use it. Very strange decisions.

But it’s structurally good, so at least these are things that users can resolve. And Thermaltake, for that matter. We hope the company considers this criticism as constructive rather than destructive, and makes moves to improve on one of their best chassis designs in years. There’s potential -- it just slipped through the grasp.