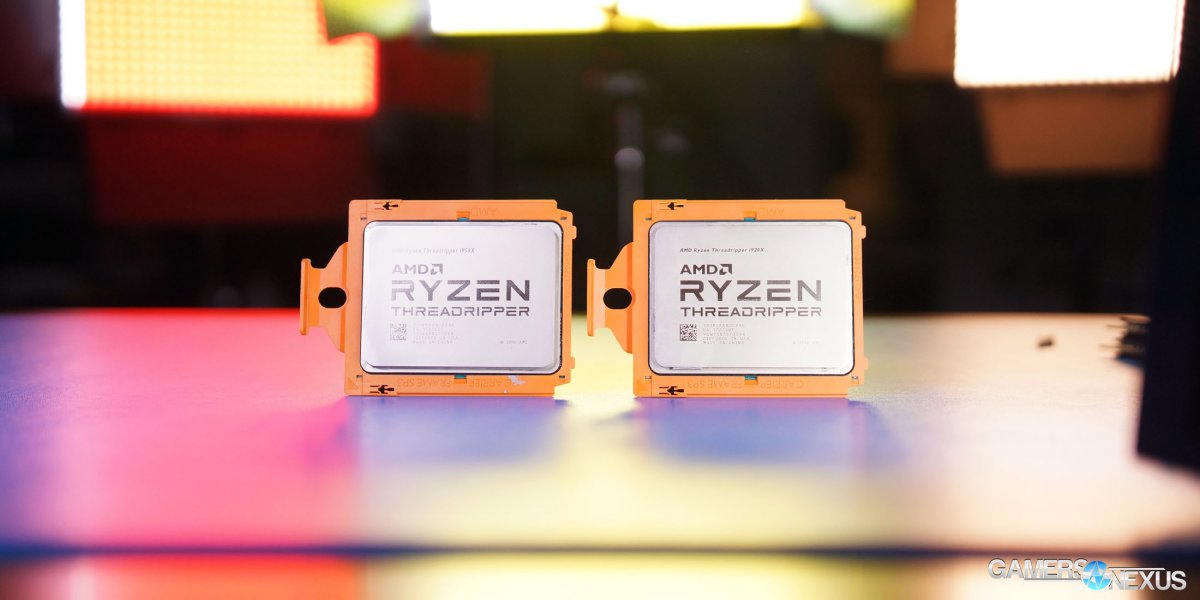 We again modified our stream benchmarking tests for this review. We started out our streaming benchmarks with just a single stream output to YouTube at 1080p60 – more info on the settings in a moment – and found that, unsurprisingly, neither the 7900X nor the 1950X had any trouble. To be fair, the 1700 also has no trouble with this. Both HEDT CPUs delivered 100% of their frames to the stream with no stress at all, and so we needed to increase load. One such way was to broadcast while simultaneously recording, using OBS for H264 encoding for both tasks. Using the “faster” preset, we still found that neither CPU became burdened to a point of showing differences. The next addition was increasing encoding difficulty to the “medium” preset, then streaming at 13Mbps and encoding at the same bit-rate while simultaneously recording to the disk.

Ultimately, it proved difficult to find the breaking point of either the 7900X or 1950X for this type of workload. One surely exists, it’s just a matter of what’s required to meet the point of failure. 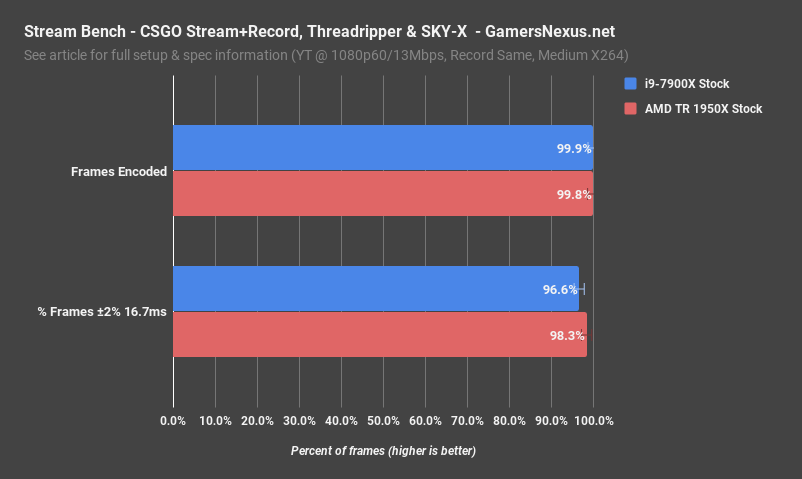 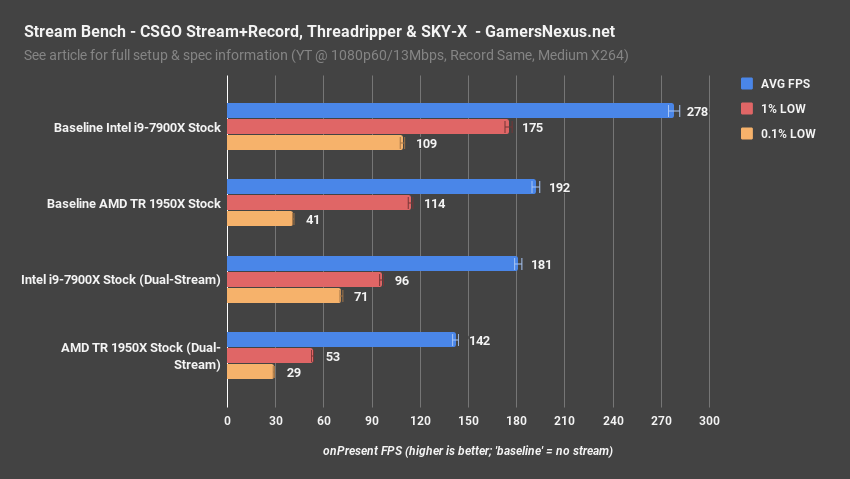 First up, our simultaneous streaming of DOTA2 to YouTube and Twitch provides a look at H264 “Faster” dual-stream encoding at 1080p60. The YouTube bit-rate runs at 10Mbps, followed by Twitch at 4Mbps bit-ratae. These outputs cover all the bases of the most common stream setups. 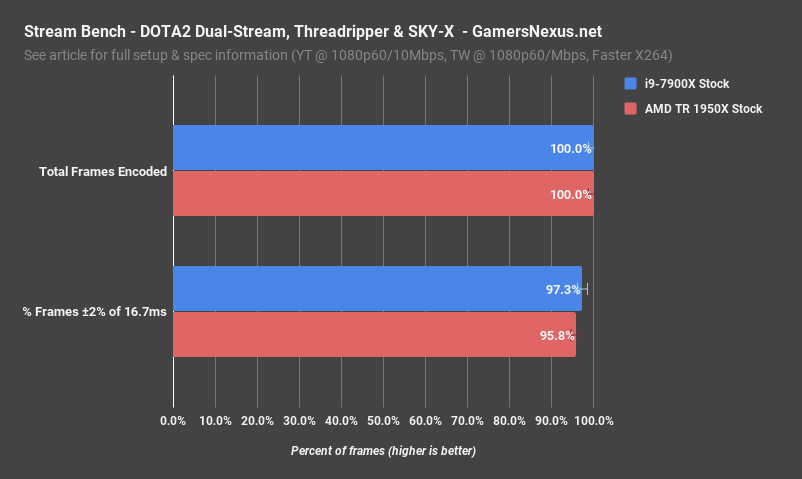 As seen here, even with this non-trivial load, we drop effectively 0% of the frames on all tested devices. We’ll look at the 1920X in the near future, though it’d be fair to assume that would perform about the same, given where the 10C and 16C parts land. As far as the viewer’s experience is concerned, both these CPUs output effectively a perfect 60FPS to two streaming services simultaneously. 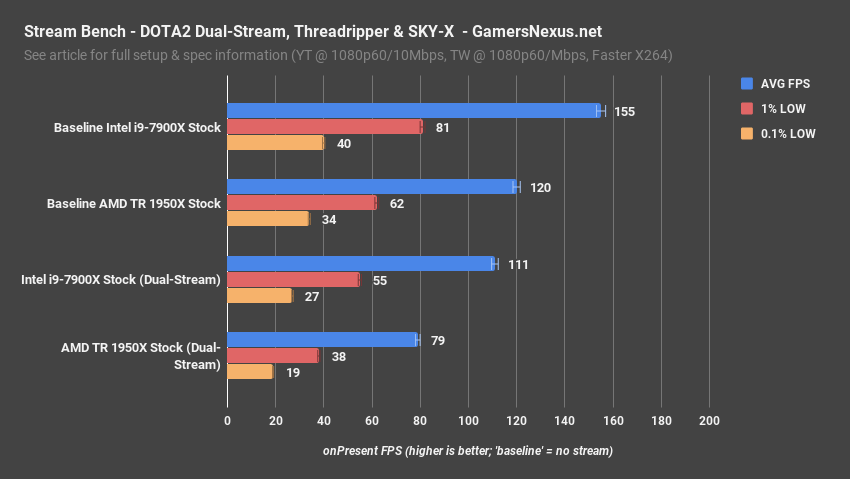 Here’s a look at the FPS output to the player, now that we know the viewer experience is good. When dual-streaming, the 1950X manages 79FPS AVG to the player, though dips somewhat in frametimes toward the 1% and 0.1% slowest frametimes. The 7900X performs well ahead here, but we also know that DOTA2 does tend to favor Intel parts. Regardless, Threadripper is hanging on plenty well and could be tuned for better performance, if really needed. Ultimately, if you wanted extreme framerates and consistent frametimes anyway, it’s probably best to just build a separate capture box to offload work. Both still do well here, though the 7900X is outperforming the 1950X in player-side framerates significantly. There’s more to this story than just frames, as always: The two CPUs are tied in viewer-side output, so we now seek tie-breakers. By running thermal and power monitoring while running the streaming benchmarks, we’re able to determine which CPU completes its task most efficiently. 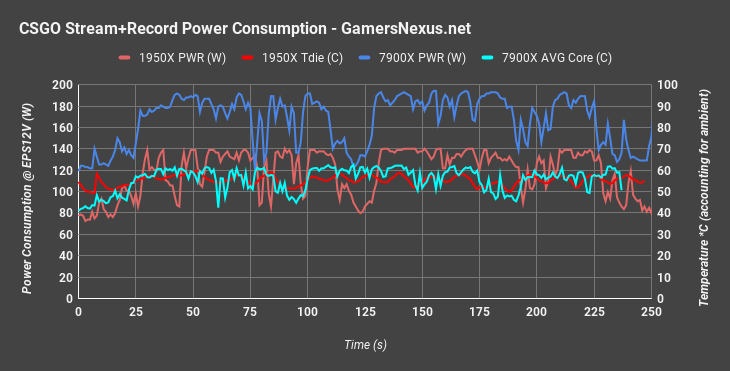 During the CSGO record & stream test with medium encoding speed, the i9-7900X was consuming 193W at the EPS12V rails when under averaged peak conditions. The Threadripper 1950X consumed about 134-140W averaged peak power. The 7900X does outperform the 1950X in player-side framerate, but the 1950X competes at 27% lower power consumption and with equivalent viewer-side output.

During this synchronized CSGO workload, we see the 7900X ramping up to an averaged peak core temperature of 62C, with the 1950X around 57C on average. Ambient is accounted for in these measurements. Not a huge difference, particularly when considering that TjMax is different for each CPU.

There’s plenty more that can be done here – all manner of affinities and process prioritization can be done to improve streaming performance, but it’s just not necessary. Both of these CPUs handle intense dual-stream and stream+record scenarios well (though you’d still get best frametimes with an external box, not everyone needs that). Intel does handily outperform AMD in player-side FPS with these two particular titles, but please be aware that this isn’t the full story. Both games are made by Valve – DOTA2 & CSGO – and tend to perform well with Intel’s higher IPC. This stated, we tried to use DiRT Rally (as this was already a part of our test suite), but found that it is one of the very few titles that refuses to launch on Threadripper. DiRT just doesn’t know what to do with the cores, and so crashes instantly. Disabling cores resolves that, but then we’re not really comparing the processors directly anymore.

Our video discusses this series of results more articulately in some places – we’d encourage watching that first benchmark section for details on the stream benchmarking. In order to really start provoking differences between these CPUs, we’d probably have to start doing some crazy workloads – dual-streaming while rendering a Blender output, for instance. 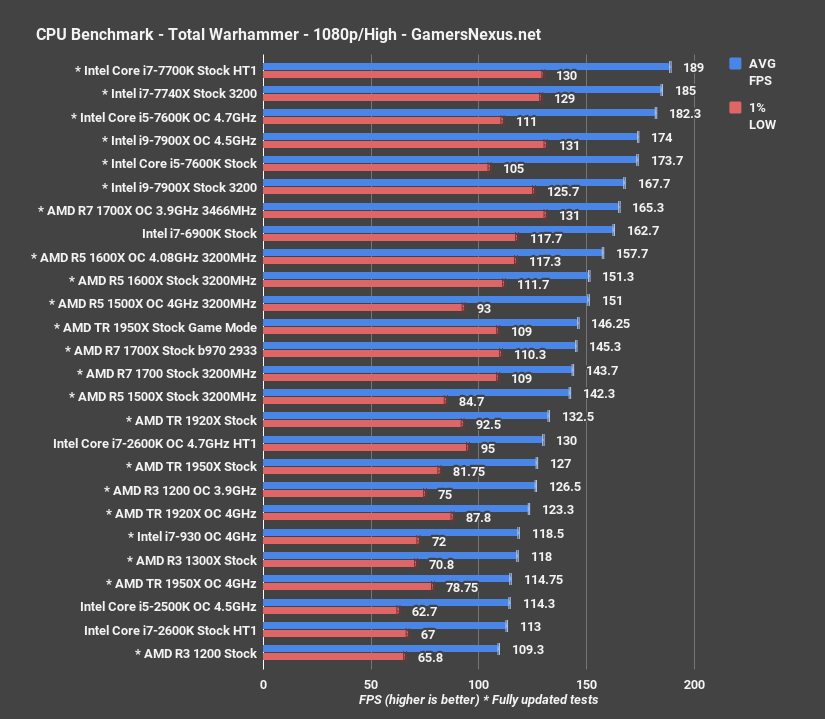 If you skipped the part earlier where we talked about how overclocking and cores impact games, now’s a good time to go back and read. Should save a few confused comments.

We’ll walk through a handful of game benchmarks next. Again, as this is an HEDT platform, we’re more interested in the X399 configurations from the standpoint of gaming while streaming – but we always look at just gaming, too, it’s just not weighted as much for HEDT.

AMD’s Threadripper CPUs benefit in Total War: Warhammer from game mode, which requires a reboot and disables half the cores, then switches the memory mode to Local from distributed. Stock, with distributed memory and 16C, the 1950X operates an AVG FPS of around 127, with lows at 82FPS and 42.8FPS. Rebooting with Local memory access and half the cores enabled, we operate instead at a significantly boosted 146FPS AVG, with lows also significantly boosted to 109FPS 1% LOW and 68FPS 0.1% LOW, up about 20FPS for each category. The AVG FPS bump is about 15% with game mode in this particular title.

Here's where it gets interesting: Notice that the all-core 4GHz overclock, which overrides XFR and other features, is performing noticeably worse than the stock configuration. This is partly because of XFR, which occasionally boosts threads to frequencies between 4.1 and 4.2GHz. AMD’s done well with XFR here: the range has expanded significantly, now at +200MHz over boost, and it functions well enough that it’d actually be worse to overclock in some games and applications; that is, unless you can overclock to 4.2GHz or higher.

As for the 1920X, we’re seeing competitive performance with the 1950X largely because the game doesn’t understand what a 16C CPU is -- or what the hell to do with it. 12C CPUs have existed in some consumer-ready capacity before, which we think may benefit the 1920X in some titles.

Comparatively, the 7900X stock CPU operates a 168FPS AVG with 70FPS 0.1% low values, and so is significantly boosted over the 1950X in this particular workload. 1440p won’t change this scaling much unless running something very graphics-intensive, but 4K will; if gaming on higher resolutions, the performance gap somewhat minimizes – though games that don’t understand the threads will still need gaming mode to resolve frame latency issues, even at higher resolutions. As usual, though, none of these HEDT CPUs are good value for gaming. You’re way better off with an R5 1600 or i7-7700K for something like this – but those won’t handle the workstation tasks nearly as well. 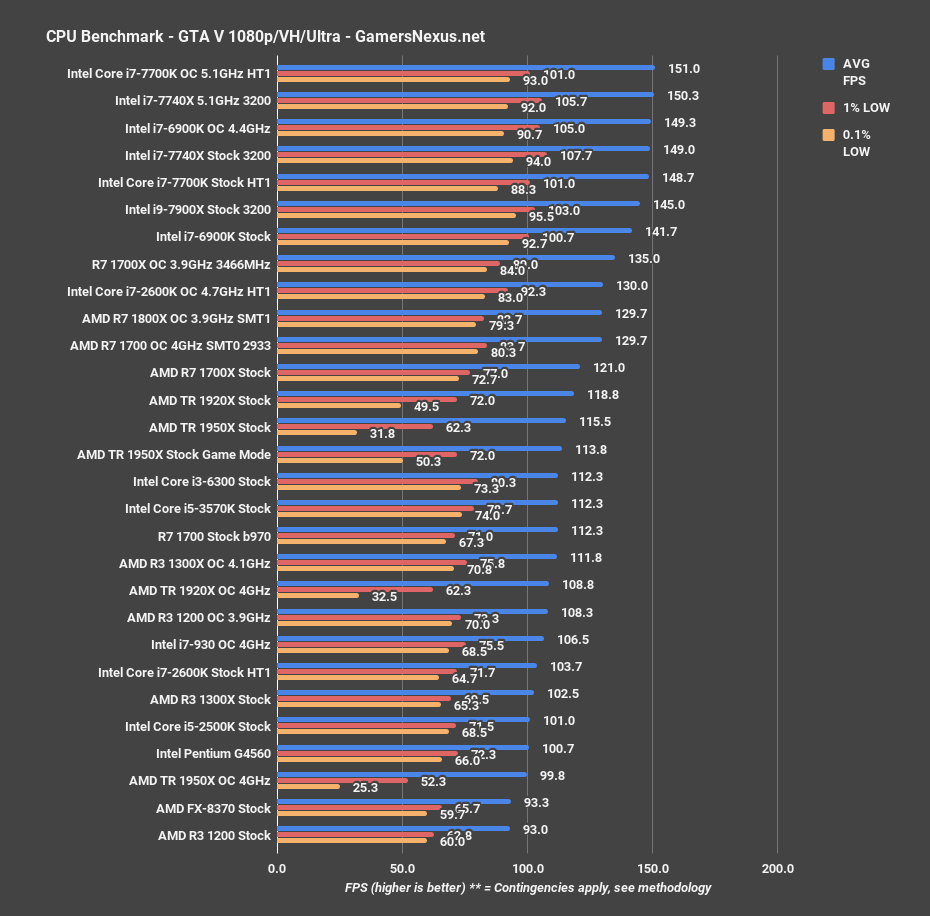 GTA V is our next title, and posts an AVG FPS of 116 for the 1950X Stock CPU, with 1% lows at 62FPS and 0.1% low frametimes calculating to 32FPS. These low-end frametime performance metrics are pretty damn bad, and that’s because the game doesn’t quite know what to do with the CPU. The frametimes are inconsistent enough that we’re experiencing visible stuttering, to a point where it’s not a pleasant gaming experience. Fortunately, enabling the “gaming mode” toggle in Ryzen Master helps resolve this issue. Game mode brings up the worst 0.1% of frametimes to about 50FPS, effectively eliminating most the visible stuttering or hitching. AVG is roughly the same. The 1920X stock CPU isn’t affected in the same way, given its lower core count, and so enjoys the benefit of a 50FPS 0.1% low out of box, with averages proportionately higher overall. Overclocking, once again, serves only to bring down our performance as we lose XFR, other automatic frequency controls, and didn’t push past 4GHz on these CPUs. 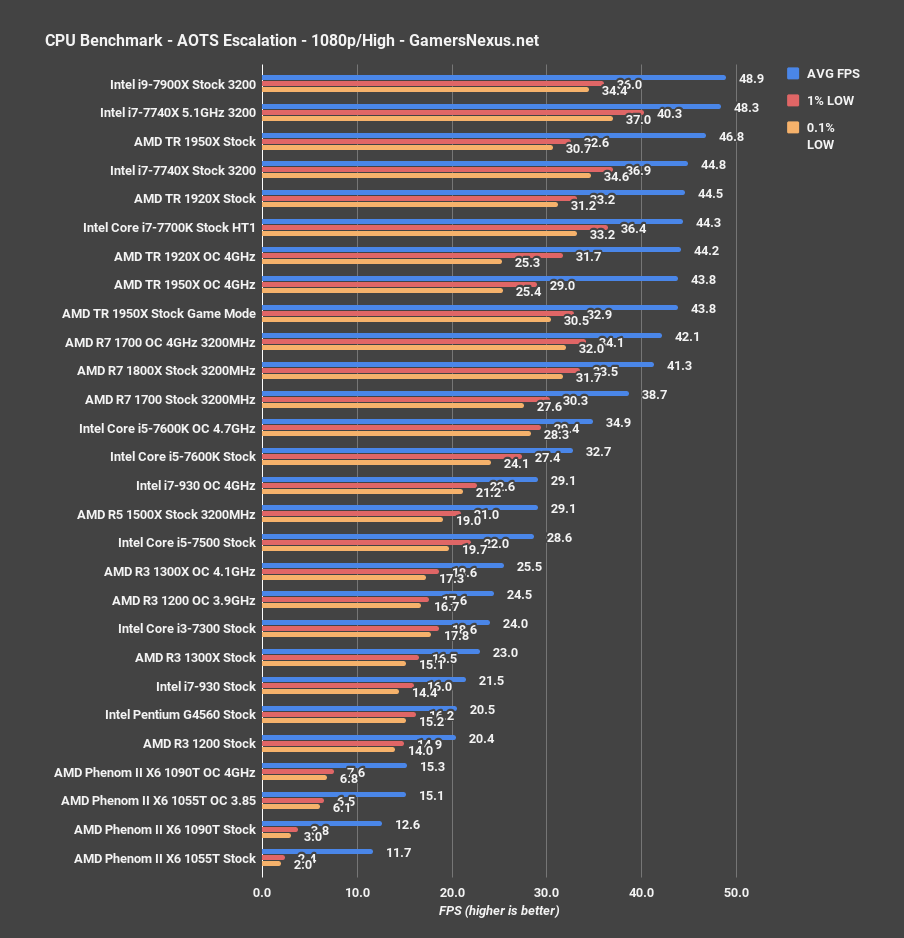 Ashes: Escalation posts the 1950X at 47FPS AVG, with lows at 33 and 31. This is one of the few tests where we consistently see higher thread counts utilized, and is also one of the few where we see a performance loss by enabling game mode. AMD acknowledged this and noted that the loss, as expected, is simply because Ashes actually uses those threads and the distributed memory mode.

This positions the 1950X about 4.5% behind the 7900X – not bad, given previous results. The 1920X isn’t far behind, and actually does lose to the 1950X in this particular title given the core difference. 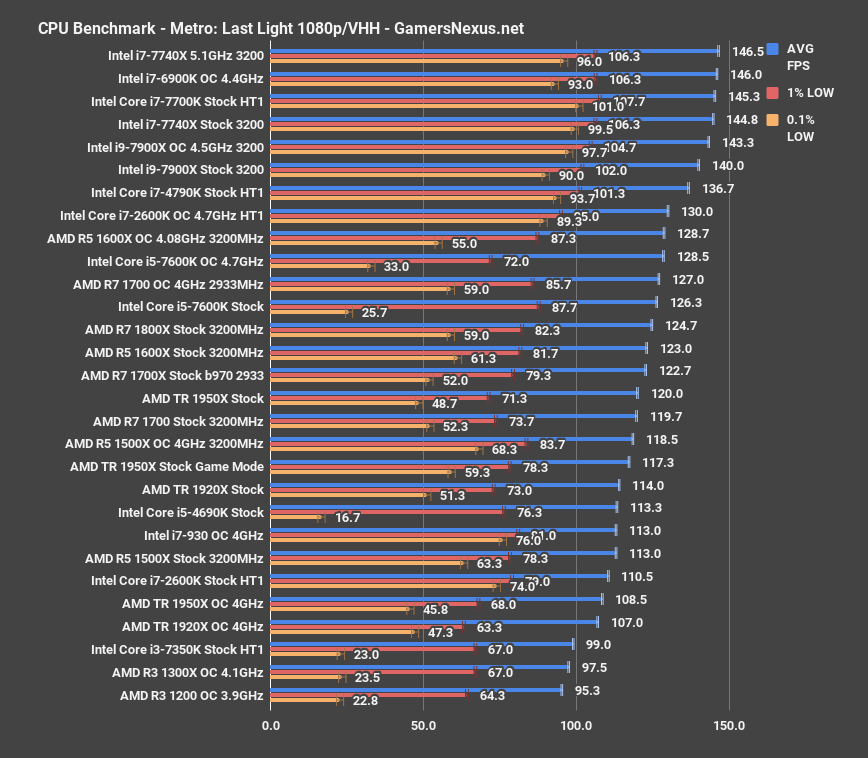 Metro: Last Light is one of the other games where the 1920X is behind the 1950X, as Metro has always been way ahead of its time for core and high thread-count utilization – as seen in i5 results, where frametimes are much lower. 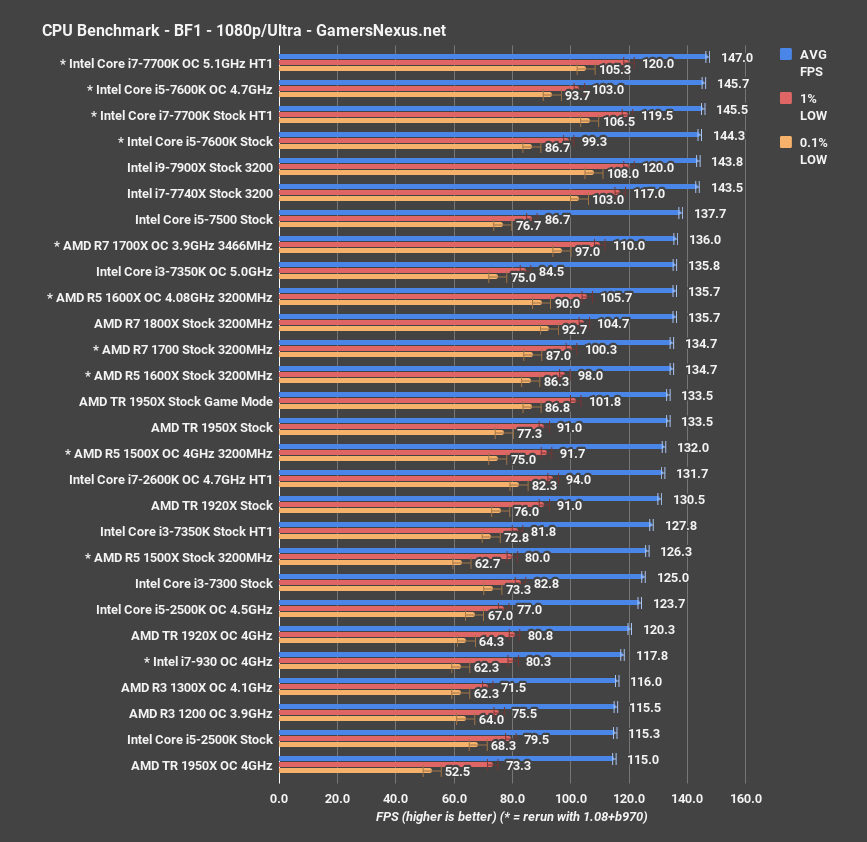 Before anyone flips for the lack of 1440p results, note well that we elected instead to run the streaming+gaming benchmarks. There are plenty of media outlets and there's a finite amount of time. Not many do the streaming tests, so we spent our limited time -- as it is now one hour before embargo lift, after 23 awake -- running the streaming tests. Other folks will have 1440p results -- grab them from there.

Continue to the next page for production benchmarks (Blender, Premiere, etc.)