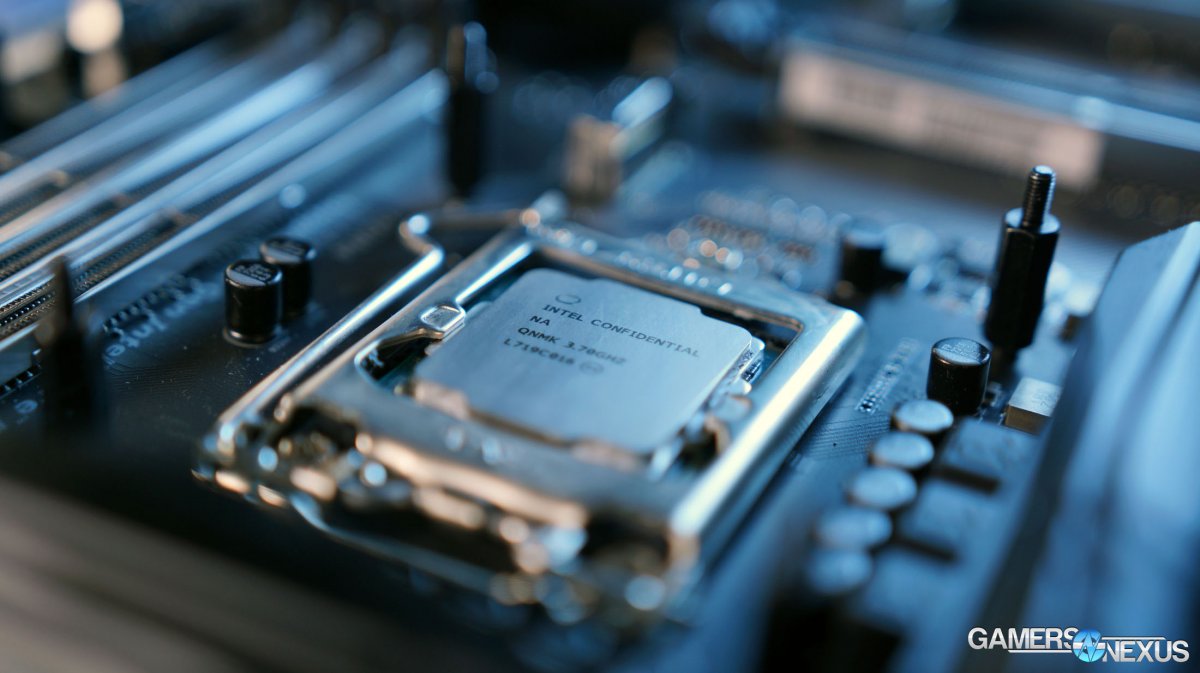 For game tests, we’re starting with legacy benchmarks first, then moving to our more data-limited new tests. Please keep in mind that these legacy benchmarks are primarily provided for scaling comparison against 10 years’ worth of Intel and AMD parts, but for modern tests, we’ll want to look to the new game benchmarks. The new charts are more limited on how much is present, as the tests were just instituted. 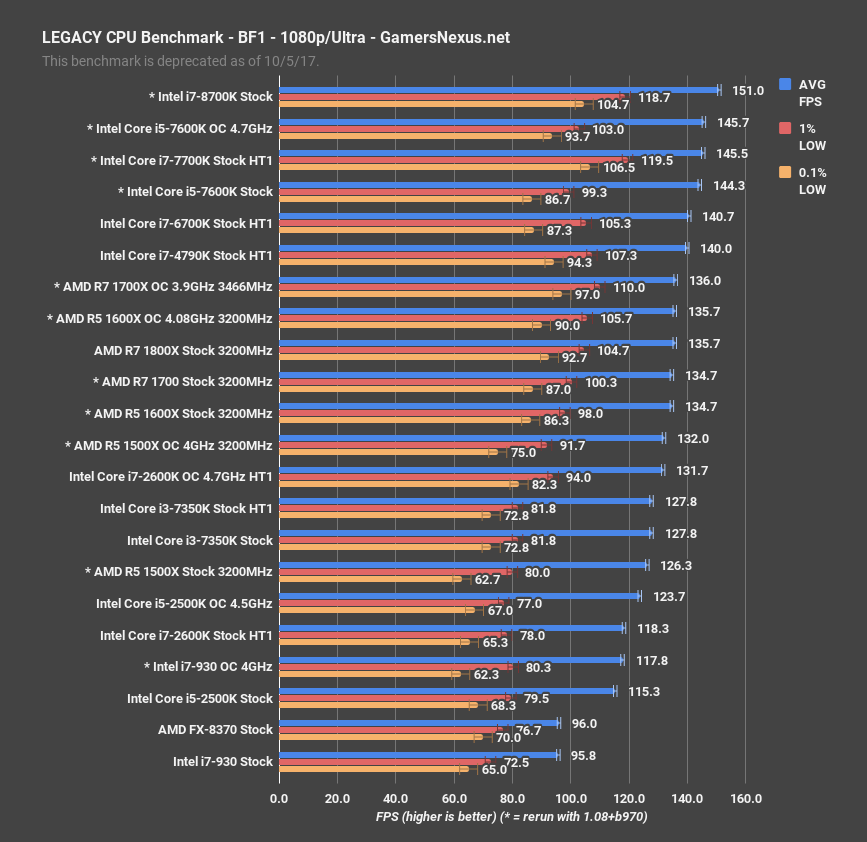 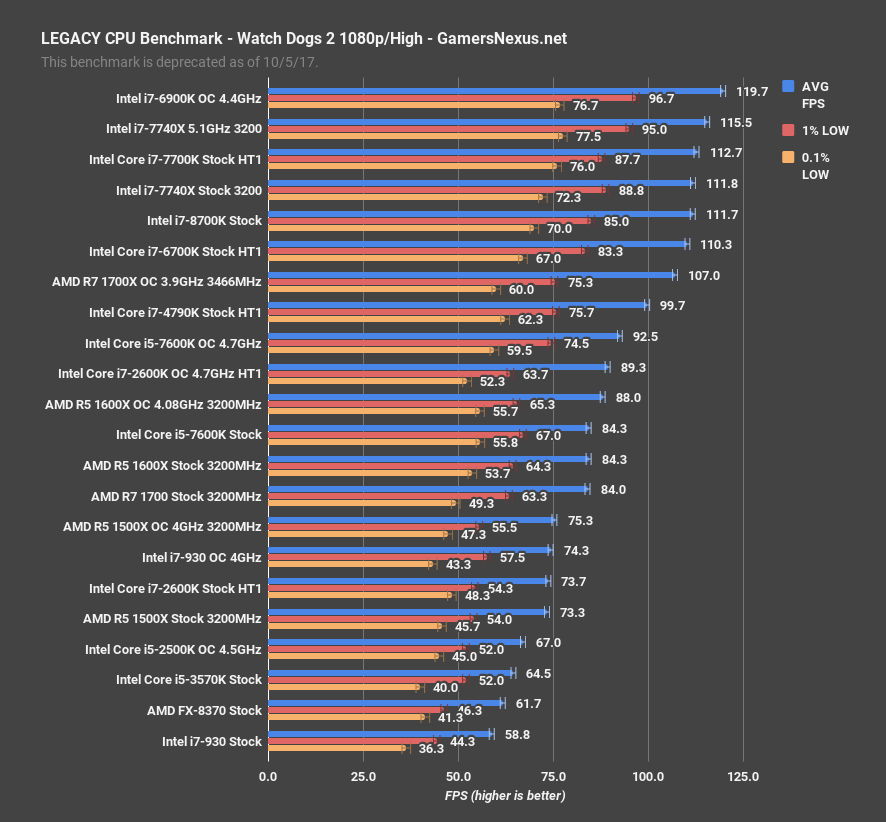 In our legacy Watch Dogs 2 test, the 8700K performed nearly the same as the 7700K, held back in some ways by the more limited boost clock. We noticed that our Gigabyte board often only turbos to 4.4GHz all-core during games, which is 100MHz lower than the 7700K’s all-core turbo. This sometimes means a slight deficit to framerate, despite the increased core-count; just like AMD’s trouble with heavily threaded CPUs, Intel is going to face an adoption challenge on the gaming front. In the future, it’ll happen – but for games out today, some will benefit from the threads and some would better benefit from speed. We have been told that some of the ASUS boards boost to 4.7GHz all-core in stock settings, which would net higher FPS.

Moving on to the new game tests, please note that none of these results are comparable with any previous tests. We are using a 1080 Ti, a newer version of windows, different memory, different settings, and different test patterns. Legacy tests use a 1080 FTW1. 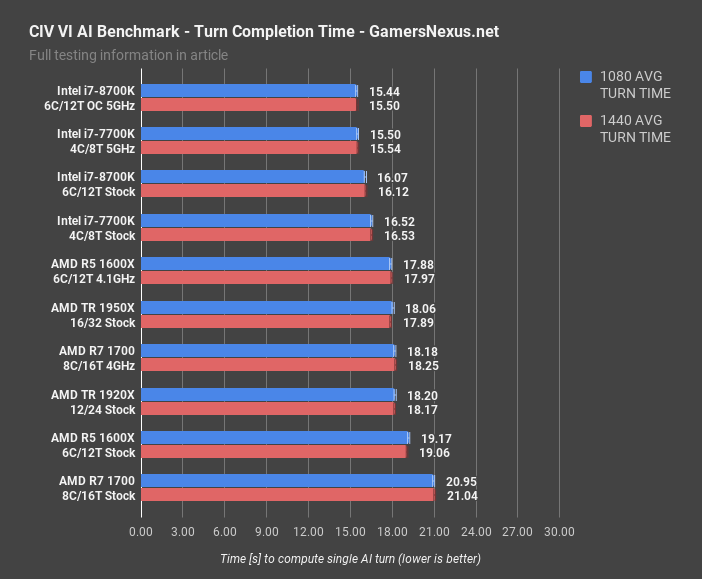 Starting with Civ VI, we used the AI benchmark to test the time required to compute AI turns, as FPS is useless here. The turn time is about the same at 1440p as it is at 1080p, though we did test both. AVG FPS actually goes up for worse CPUs, because the time spent sitting idle on the screen is longer, as it takes longer for the game to calculate a turn. This makes FPS an unusable metric for this particular AI benchmark.

The 5.0GHz overclocked i7-8700K holds the fastest average turn time, at about 15.4-15.5 seconds per turn. To give an idea for range, this is a 26.6% reduction from the slowest time. Although a 5-second range average turn time is not huge, keep in mind that this is per-turn, so a 5-player game would benefit from a 25-second reduction in total time to get back to your next turn. Across long play periods, this can add up, but the relevance is up to you. 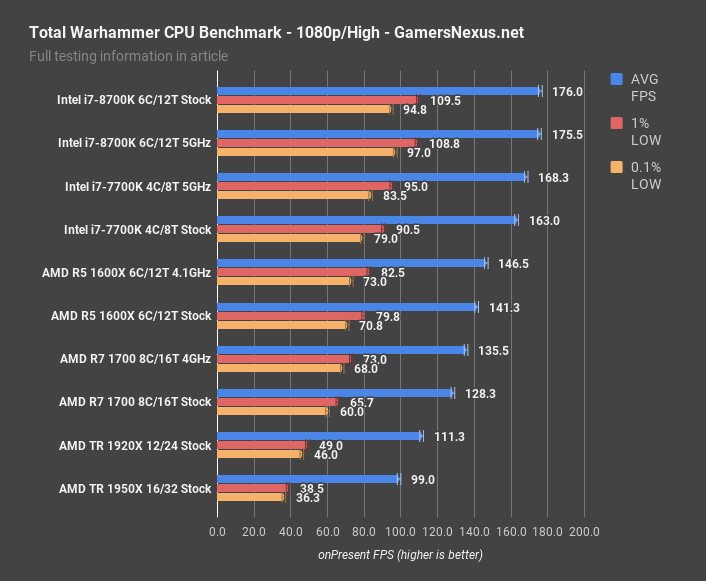 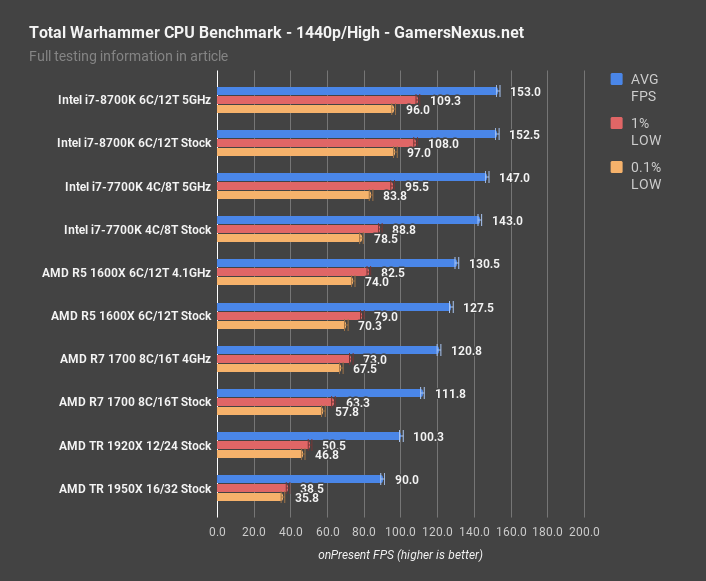 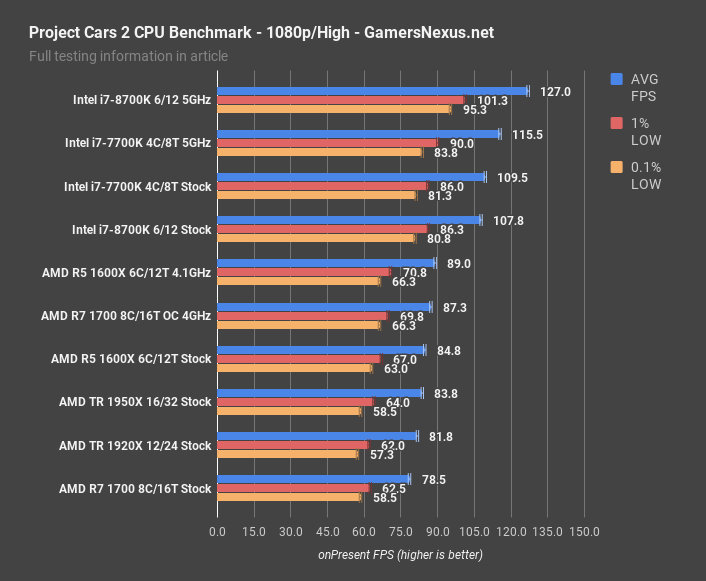 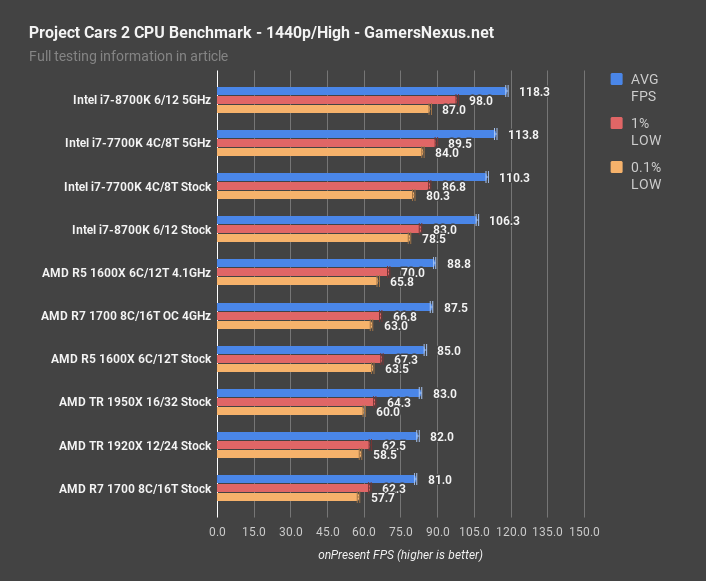 At 1440p, the 8700K manages 118FPS overclocked, 106FPS stock, with our all-core 100MHz deficit to the 7700K producing the expected favor for Kaby Lake. Ryzen performance remains more or less exactly where it was for the 1080p results, as a result of being CPU-bottlenecked. 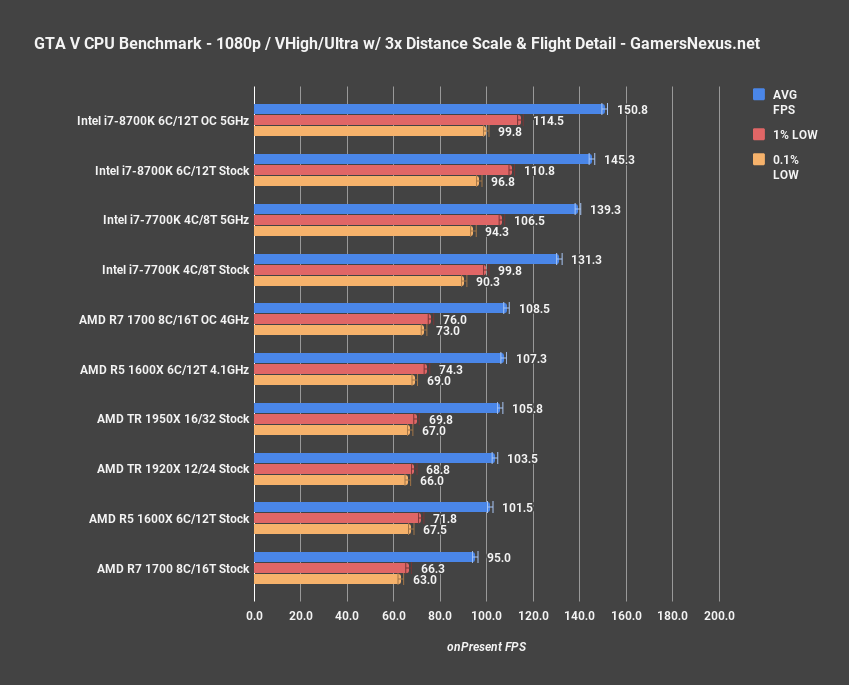 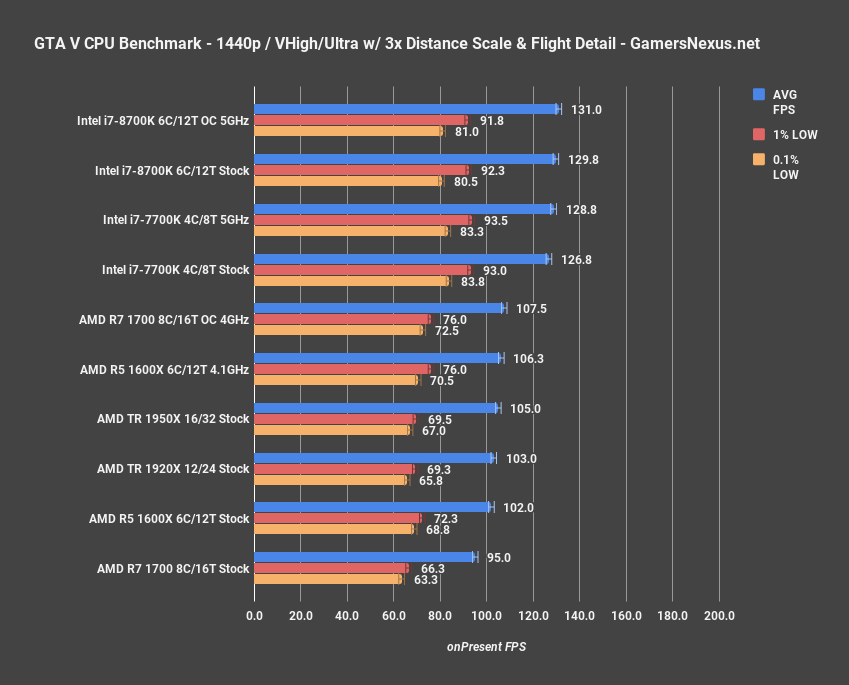 Keep in mind that GTA V encounters a bug at 187.5FPS, triggering severe stuttering in some cases. 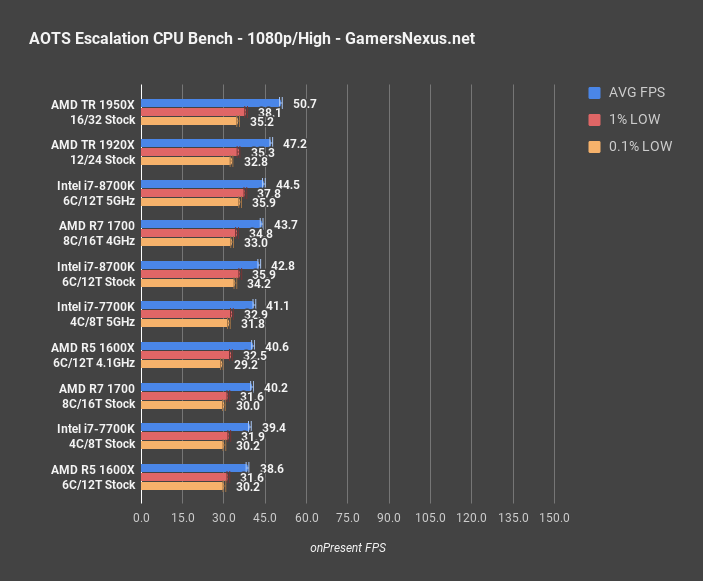 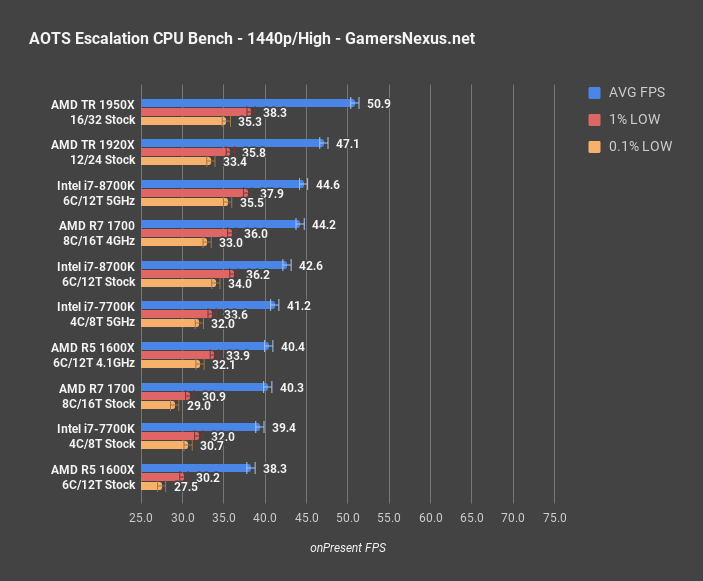 Continue to the next page for Blender & Premiere tests.