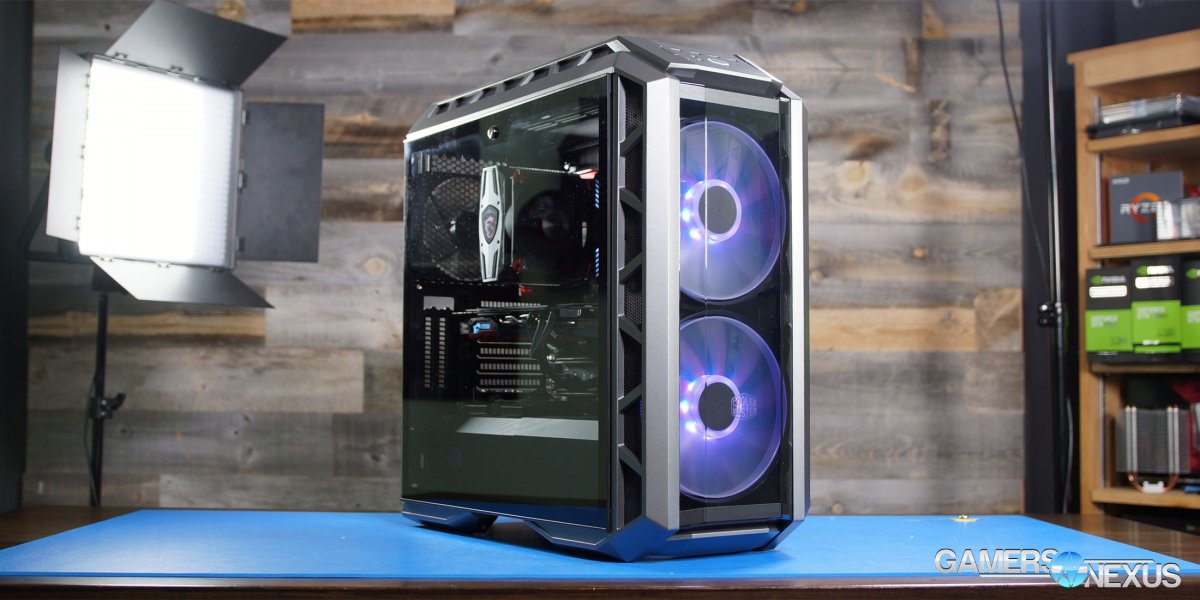 The only removable filter in the case is beneath the PSU, and elsewhere intakes are covered with strips of mesh built into the panels. The 200mm fans are mounted outside the chassis due to their size, with two results: the fans are too far forward to take full advantage of the side vents, and they’re closer to the unventilated front panel than smaller fans would be. For a case that’s supposed to be connected to the HAF (High Air Flow) lineup, this is an unfortunate arrangement. In the stock configuration, much of the incoming air is directed through the top and bottom of the front panel (both filtered).

We didn’t do anything fancy for additional testing this time, just our sort-of-functional vertical GPU mount and taking the front panel off to see how much it limits cooling potential. There’s not much point in testing additional fans: the intake fans are a selling point of the case (200mm, 700-800RPM), the exhaust fan is pretty good (140mm, 1200-1300RPM), and together they fill all the fan slots we typically test. We plan to do more testing in the future.

We’ll add comparative data next, as always, but we’re first starting with only the H500P. This will give us a better understanding as to how the case performs under various conditions. With the stock configuration and under a torture workload, the H500P manages a CPU delta temperature of 56.1C over ambient, with idle at around 4 degrees Celsius. Removing the front panel entirely drops us down to 43.7 degrees, constituting the largest drop we’ve ever seen from this simple panel removal test. This tells us that the 200mm fans have a lot more cooling potential than they’re being afforded, particularly noticeable as the resistance caused by the front panel is quite high, dropping fan RPM by about 50 revolutions per minute. Ignoring that aspect, though, we can highlight that the front panel mesh, despite being about an inch wide, actually only exposes less than a half-inch of mesh to the fans. The fans choke on this limited space, and are already challenged in the static pressure department, as fans often are.

Installing the GPU vertically drives us up a bit more than 1C in our CPU measurements, which is partly because of the collision course between the CPU tower cooler and the video card. We’d expect this to be better under conditions of a reference-sized PCB. 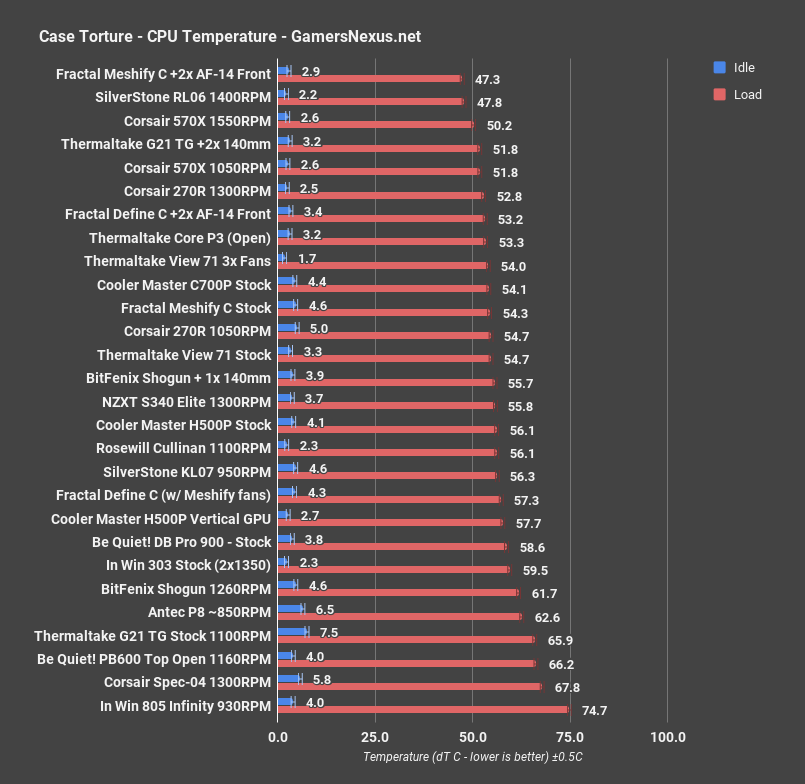 Comparatively, the Cooler Master H500P stock configuration lands at about 56.1C CPU load temperature over ambient, positioning it between the Cullinan enclosure and NZXT S340 Elite, a case which we previously knocked for mediocre ventilation. Despite numerous references to “High Air Flow” in the case’s review guide, the enclosure offers decidedly less airflow than the $70 SilverStone RL06, positioned at 48C over ambient, or the Corsair 570X at a slower 1050RPM fan speed, or even the Thermaltake View 71 at 54.7C over ambient. The H500P doesn’t impress in the slightest, but also isn’t dismal. It’s just kind of OK. For any other case, that’d be, well, OK, but it’s a bit disingenuous on a case marketed as high airflow.

Moving on to GPU torture temperatures, the Twin Frozr card manages 54.9C over ambient in the stock configuration, keeping it a couple degrees away from throttling, so it’s actually not too bad when stock. Removing the front panel expectedly improves thermals, though only by 5C for the GPU – the CPU impact was much greater. A vertical GPU mount suffocates our dual axial cooler on the card, which is pressed up against the glass and now has to deal with radiative heat trapped between the GPU backside and CPU cooler. This results in a 68C over ambient temperature, pushing us well past thermal throttle territory and into frequency decay. Now, of course, this could be accounted for by blasting GPU fan RPM, but then the noise argument goes out the window. You’d be best off with an open loop GPU cooler, a Hybrid card, or a reference card. 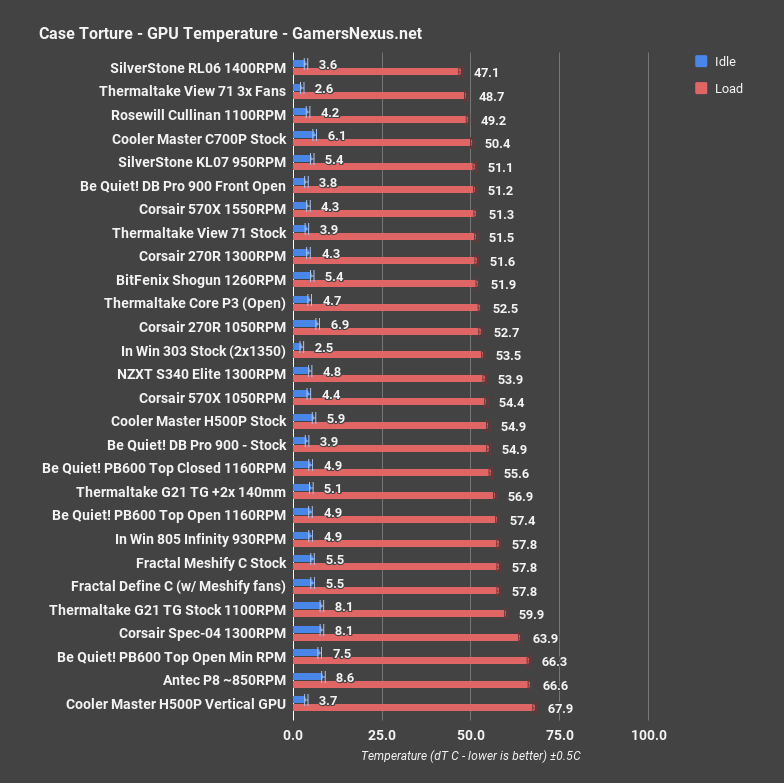 Comparatively, GPU torture testing lands the Cooler Master H500P stock configuration at 54.9C, just between the 570X at a lowered 1050RPM (its stock 1550RPM lands at 51C) and the Be Quiet Dark Base Pro 900. The H500P is cooling the GPU about as well as cases that are targeted at silence. At least, it is in these torture workloads, and a lot of that is the PSU shroud. 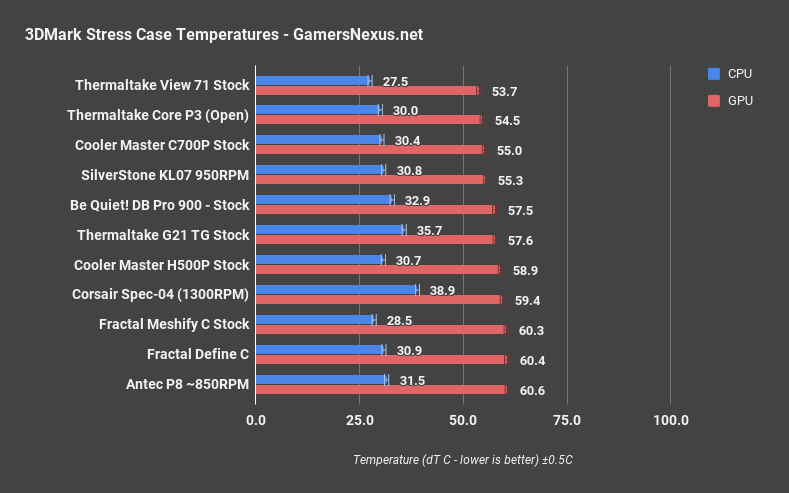 Moving on to 3DMark stress testing, which represents a realistic gaming workload, we encounter GPU thermals of about 58.9C on the H500P, right alongside the $50 Spec-04 and Thermaltake G21. To its credit, CPU thermals are a lot better, here, at 30.7C versus 36 and 39C on the two aforementioned cases. This is because of the GPU being butted against Cooler Master’s PSU shroud, with limited airflow over the GPU area directly; in fact, the GPU aligns somewhat with the deadzone on the 200mm fans, though it’s far enough away that this issue should minimize. CPU thermals position the case between the KL07 and C700P. 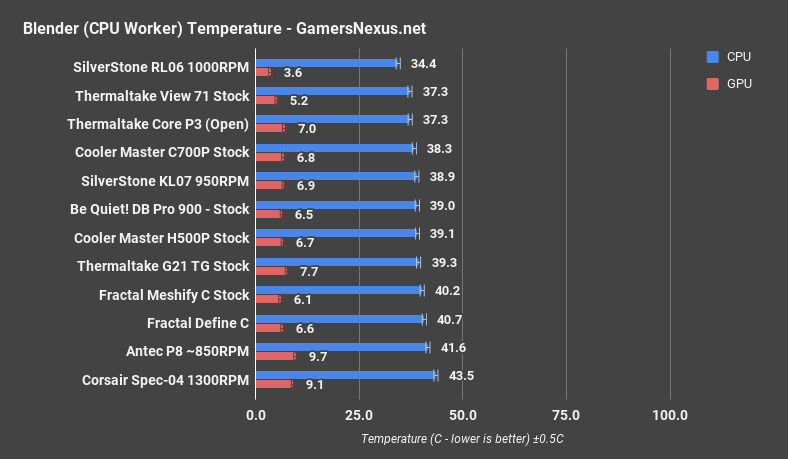 Testing Blender for a realistic production application, our CPU worker rendering test positions the H500P CPU thermals as acceptable, at about 39C delta T over ambient, because this test generates less heat than some of the gaming workloads. That’s down to GPU utilization, which is 0% in a CPU worker Blender test. The H500P still isn’t impressive, though, and lands middle of the pack. 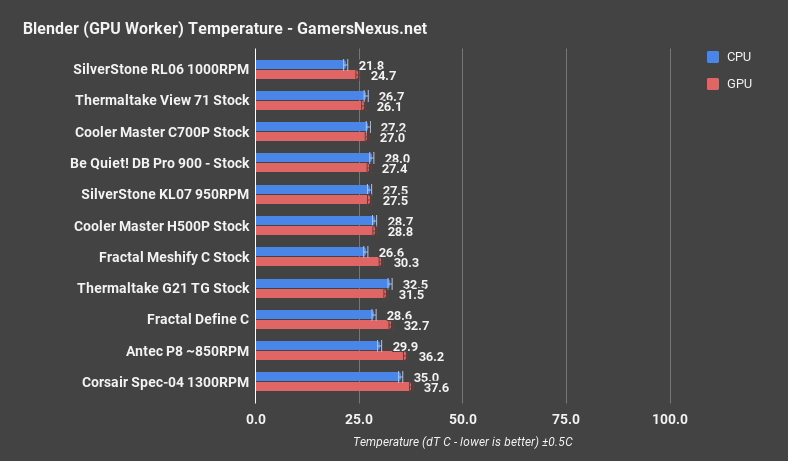 As for GPU workers in Blender, where the CPU load is minimized, we’re again objectively in non-thermally-threatened territory, but still mid-pack. The H500P lands between the DB Pro 900, once again, and the Meshify C. 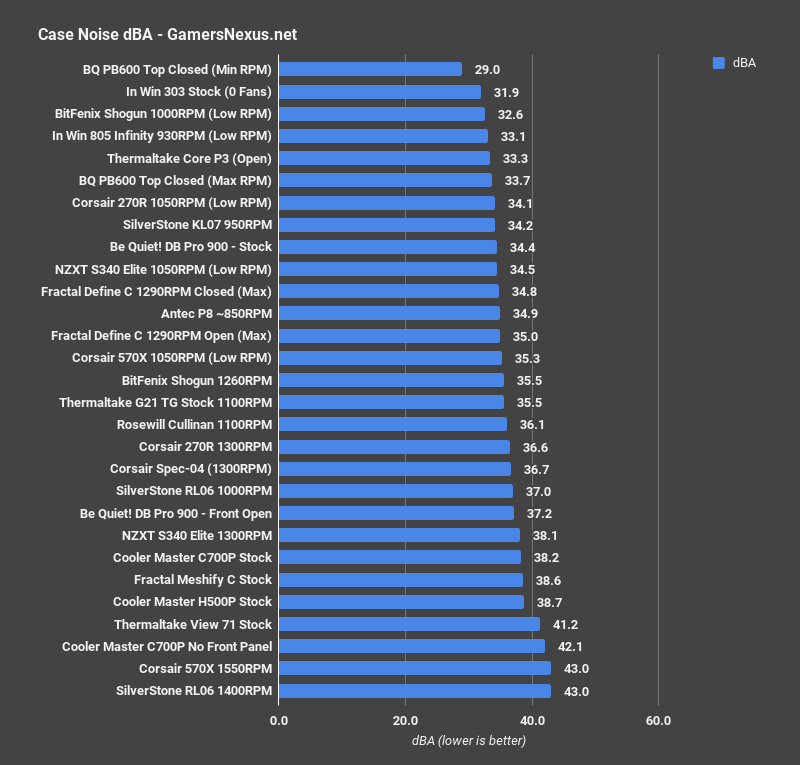 Surely, then, the noise should be better in this case, as its larger fans do spin slower than the whinier fans of 120mm and 140mm sizes. In our standardized noise testing, the Cooler Master H500P lands at 38.7dBA system noise, so just before the jump into truly higher airflow configurations that generate 40+ dBA of noise. That makes the H500P about the same in acoustic performance as the Meshify C, given our configuration and with the same test system. Not impressive, but not awful. 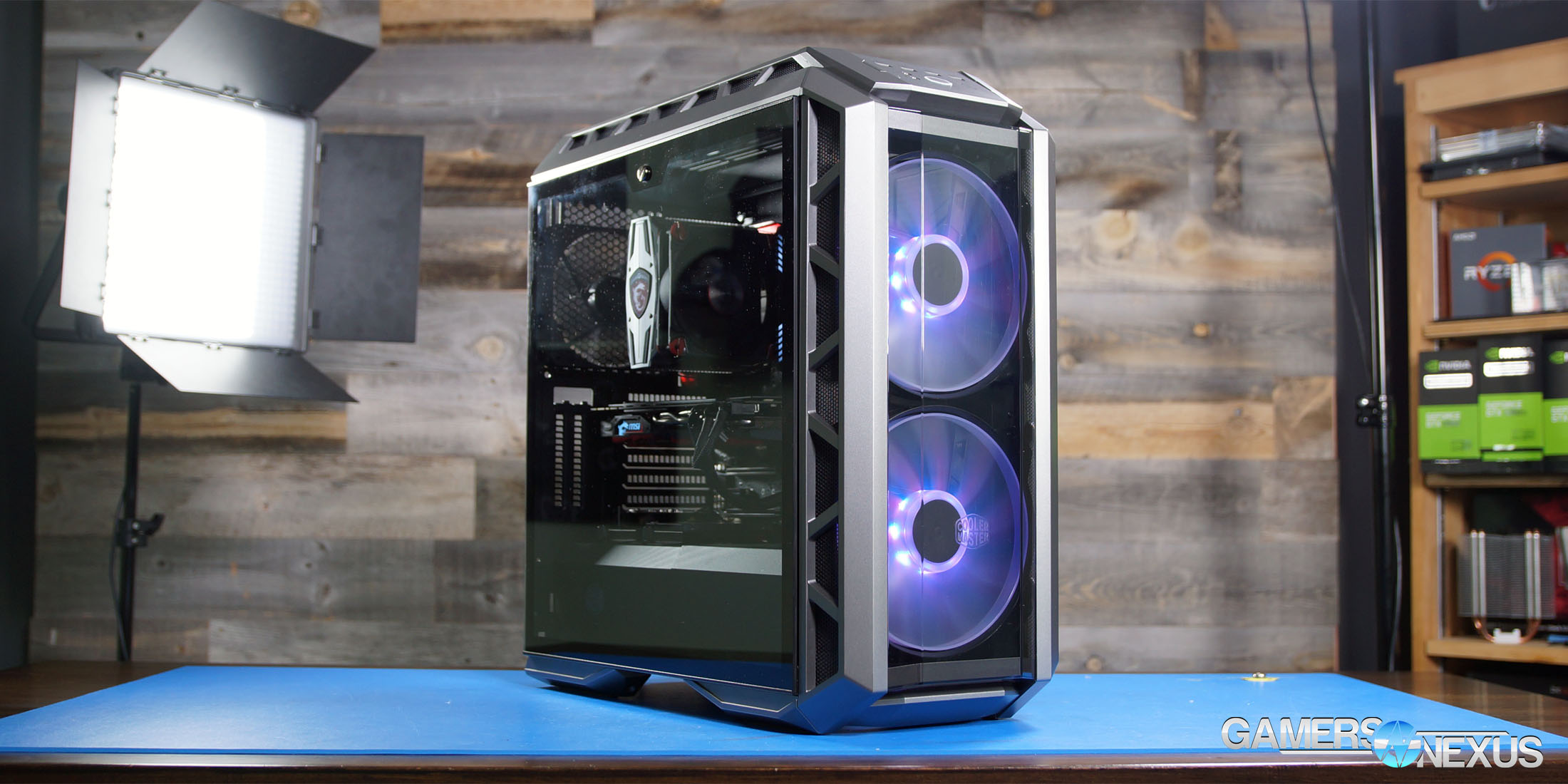 The H500P is a visually distinctive case that’s inspired an unusual amount of excitement, and some of that excitement is due to the fact that it’s a nominal refresh of Cooler Master’s much loved HAF cases. Somewhere along the line, though, the literal meaning of the “high airflow” acronym has been lost, and the H500P doesn’t live up to its dusty-but-well-ventilated forerunners. Although this is not a HAF case in the proper noun sense, Cooler Master does claim that it’s a case with high airflow, and that just isn’t true in the stock layout--not as much as it could be with a different front panel, at least.

The H500P looks just as good as it did at Computex, and buyers won’t be visually disappointed by the eye-catching chunky RGB fans and tempered glass. They might instead be disappointed by the priority that modularity has taken over functionality: the H500P comes across as a chassis that’s going to be sold as a few different SKUs with different external panels. Build quality overall is poor, creaky, and flexing, coupled with poorly designed mounting joints for both the front and TG side panel.

In terms of performance and build quality, this isn’t a case that merits its price, but it’s also not a case that has easy alternatives to recommend: the bowed-out front window and oversized fans make it unique. The Thermaltake Core 71 TG we reviewed recently wasn’t our favorite case, but it did include four tempered glass panels for only $20 more than the H500P. A case like the Meshify C offers glass and better potential cooling for a fraction of the price. Those who have a deep need for the H500P’s appearance, though, must either shell out the $150 for a case that’s middling in performance or wait for another company to rip off Cooler Master’s design.