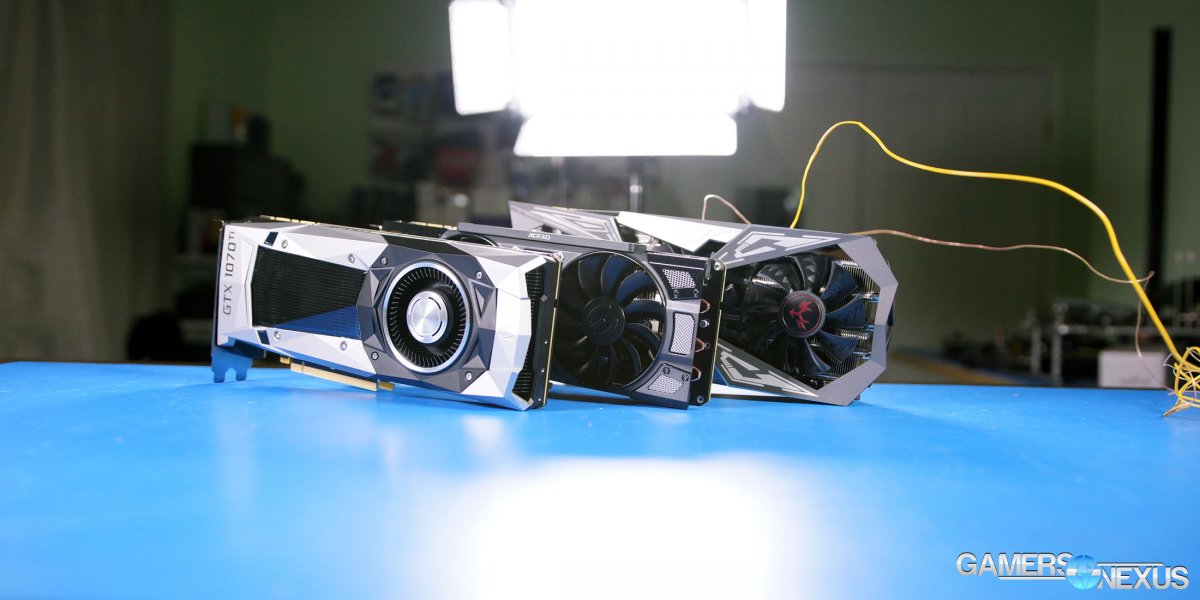 The most important aspect of game benchmarking is not to feature dozens of games, but rather to focus on representing each type of game. Vulkan, DirectX 11, and DirectX 12 are all represented below.

We’re running DOOM with Vulkan, ultra settings, and async compute, because anti-aliasing can be disabled for async compute. This chart is for 4K. The GTX 1070 Ti averages 68FPS, with lows at 51FPS 1% and 42FPS 0.1%. This plants it 1.6% behind the nVidia GTX 1080 reference card; of course, aftermarket cards would rank higher, but keep in mind that nearly all GTX 1070 Ti cards are functionally the same in non-overclocked performance. This might as well be reference, as it has the same clocks. 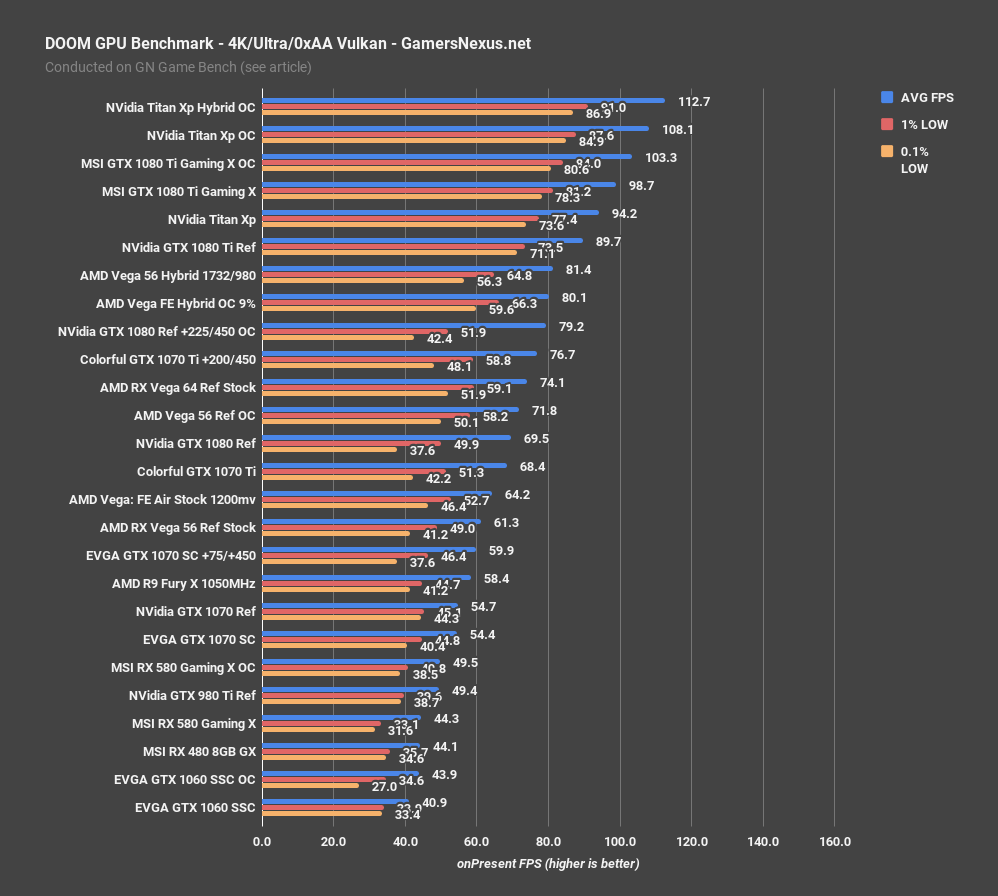 The 1070 Ti also outperforms the reference 1070 by about 25%, with the overclocked 1070 SC being outperformed by 14.2%. That’s a pretty reasonable climb, and shows that the GTX 1070 Ti is much closer to the GTX 1080 than the 1070. Overclocking the GTX 1070 Ti puts it up at 77FPS AVG, a jump of 12% over reference. The GTX 1080 overclocks to be 3% ahead, which means that your differences will vary more from chip-to-chip than anything else. In this particular game, overclocking is something of an equalizer between the two, and the extra money on the 1080 makes no sense. 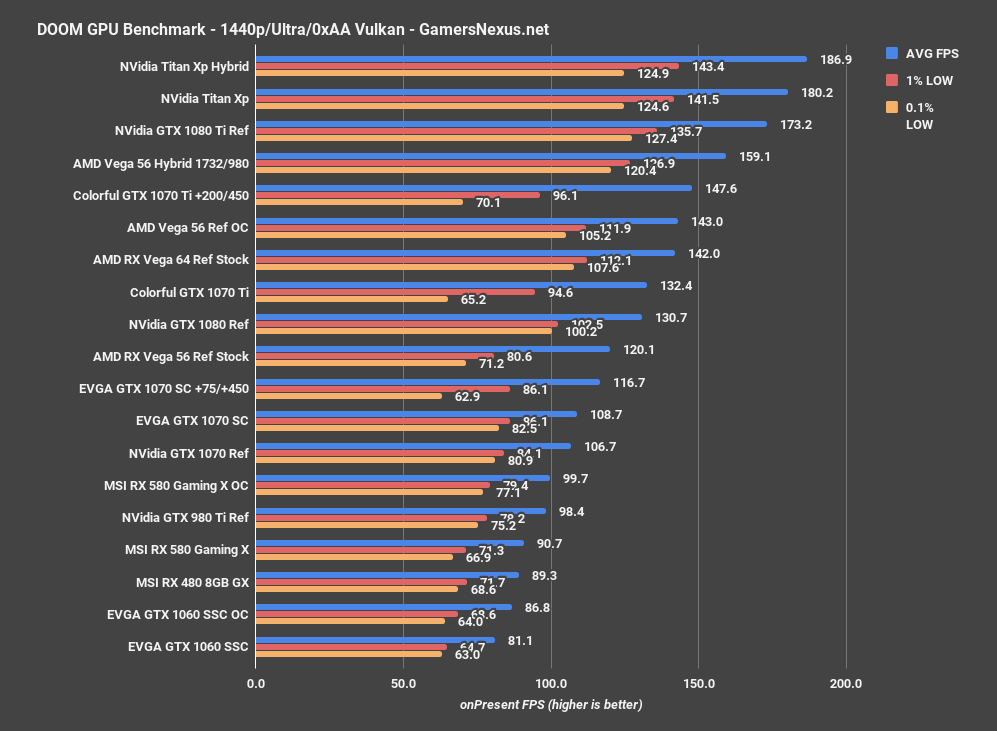 Scaling is largely the same in the lower resolutions, but we do start bumping into the game’s engine constraint (200FPS) toward the upper-end, which means we can’t truly know the unconstrained FPS of the higher-end devices. 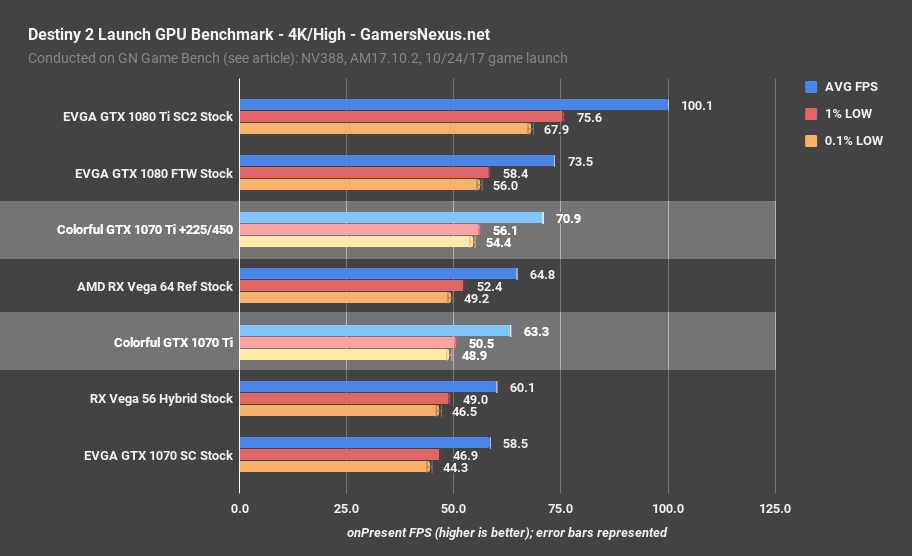 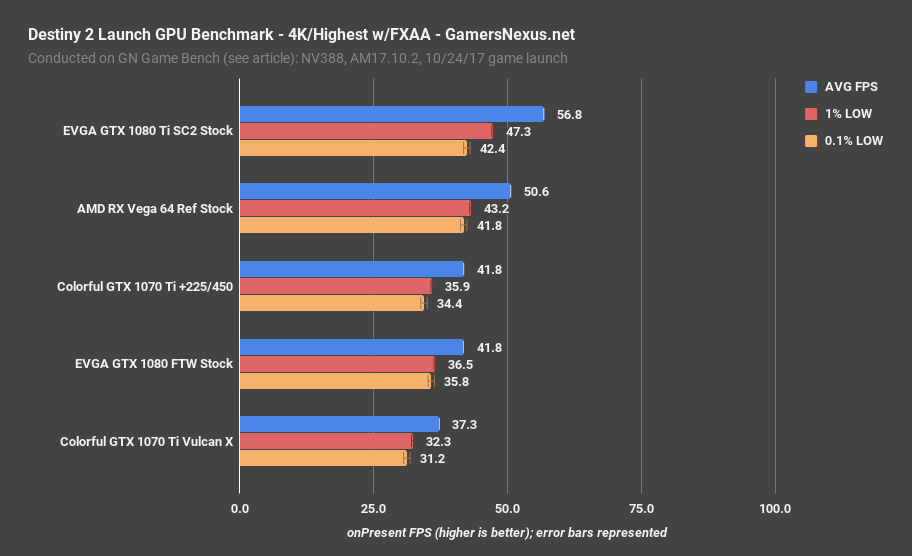 Note a few things about Destiny 2, our next game: One, in our dedicated Destiny 2 GPU benchmark, we found that switching between High and Highest settings has major impact on the hierarchy of cards. In the beta, AMD lost huge ground with Highest DOF; with launch, nVidia is losing ground with Highest. We will show both, then you can just decide how you’d like to play the game. We tested Destiny 2 at 4K high and highest, 1440p high and highest, and 1080p highest. 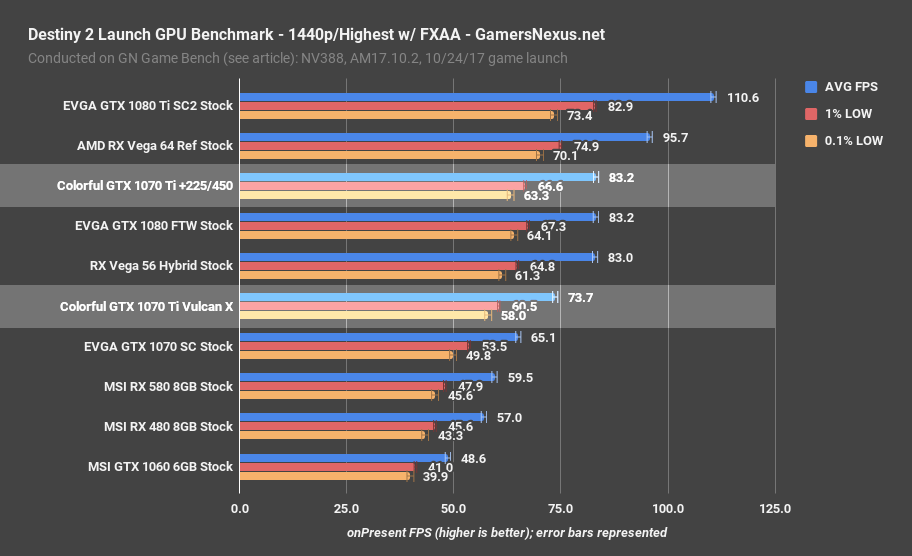 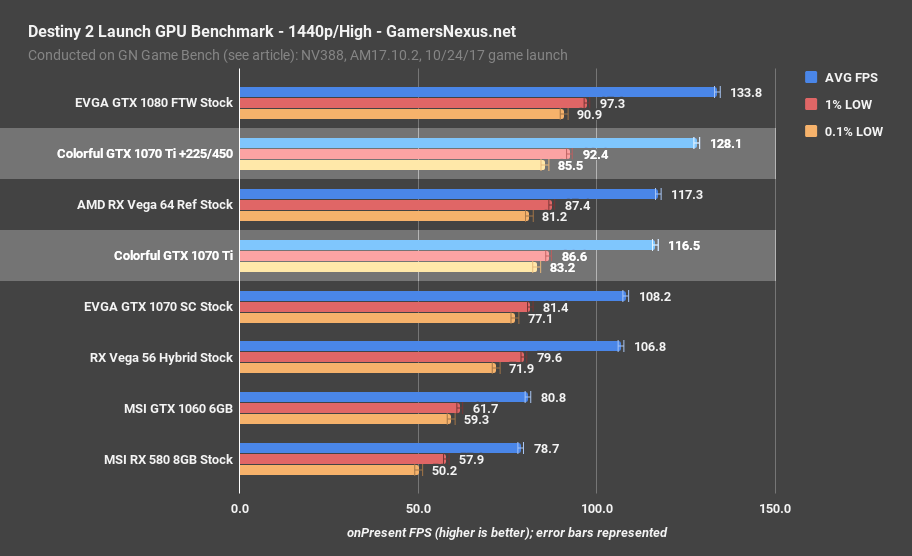 1440p/High reshuffles the hierarchy, with the Vega 56 card now behind the 1070 Ti card, at 107FPS AVG versus 117FPS AVG. The 10-series card hierarchy remains about the same as before. This is where you need to decide how you feel about high versus highest settings for this game. 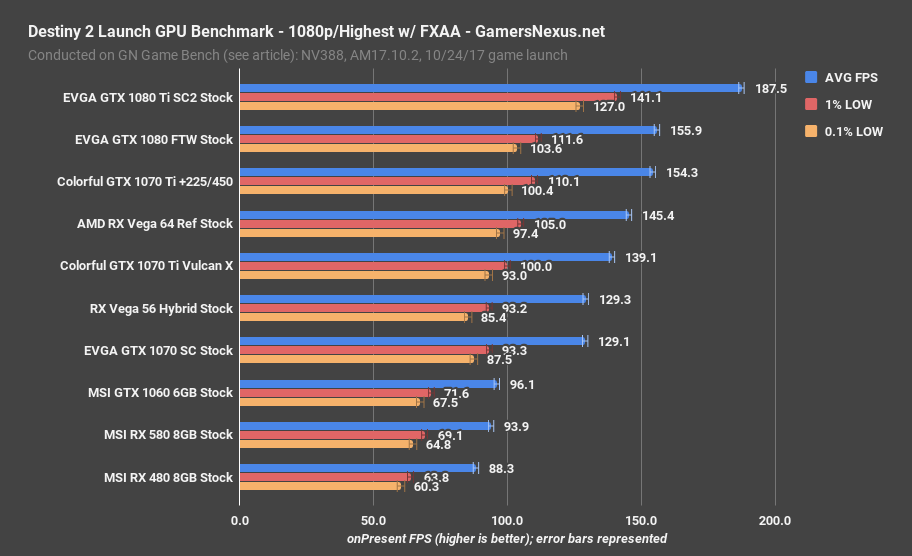 The 1080p results for high and highest are also above. 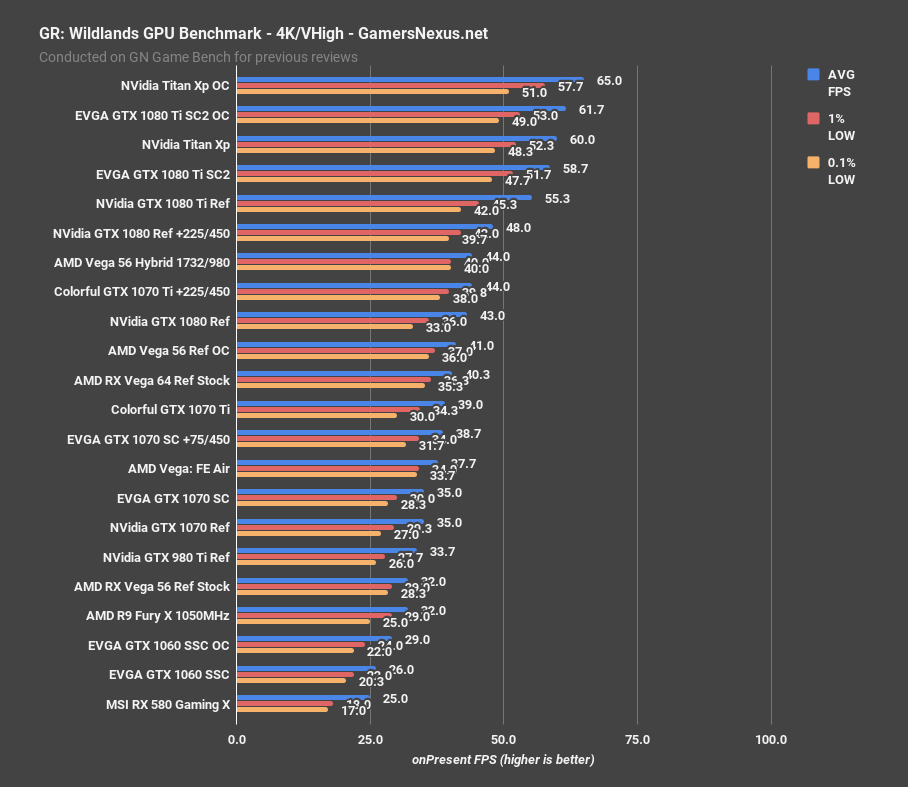 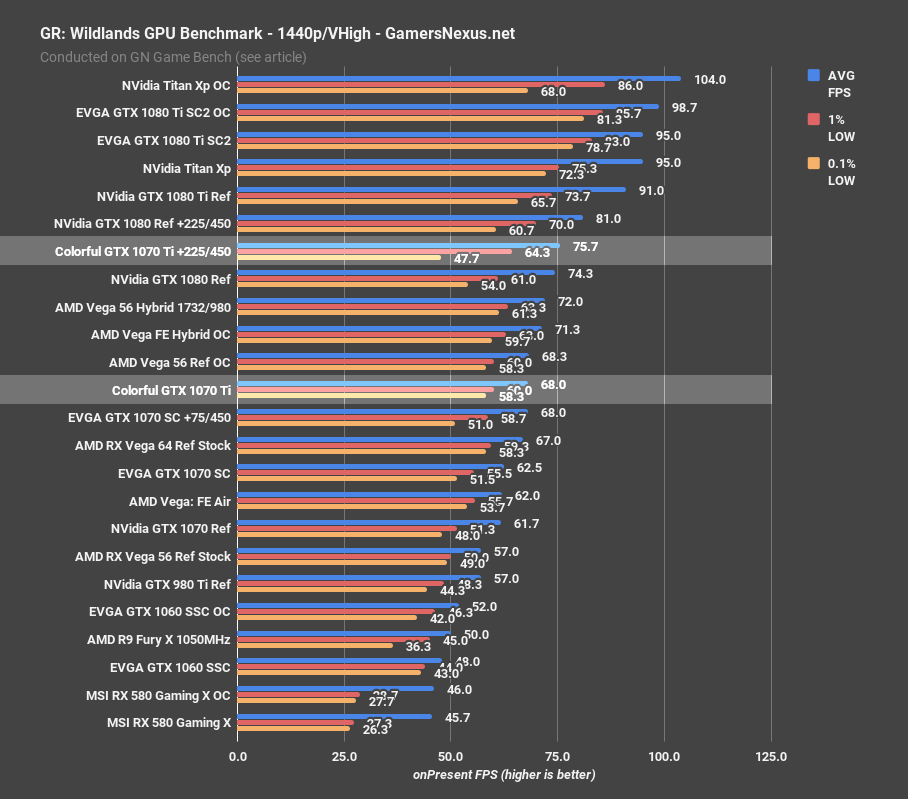 Note that the overclocked 1070 Ti drops some frametime consistency in the 0.1% low values due to clock behavior. 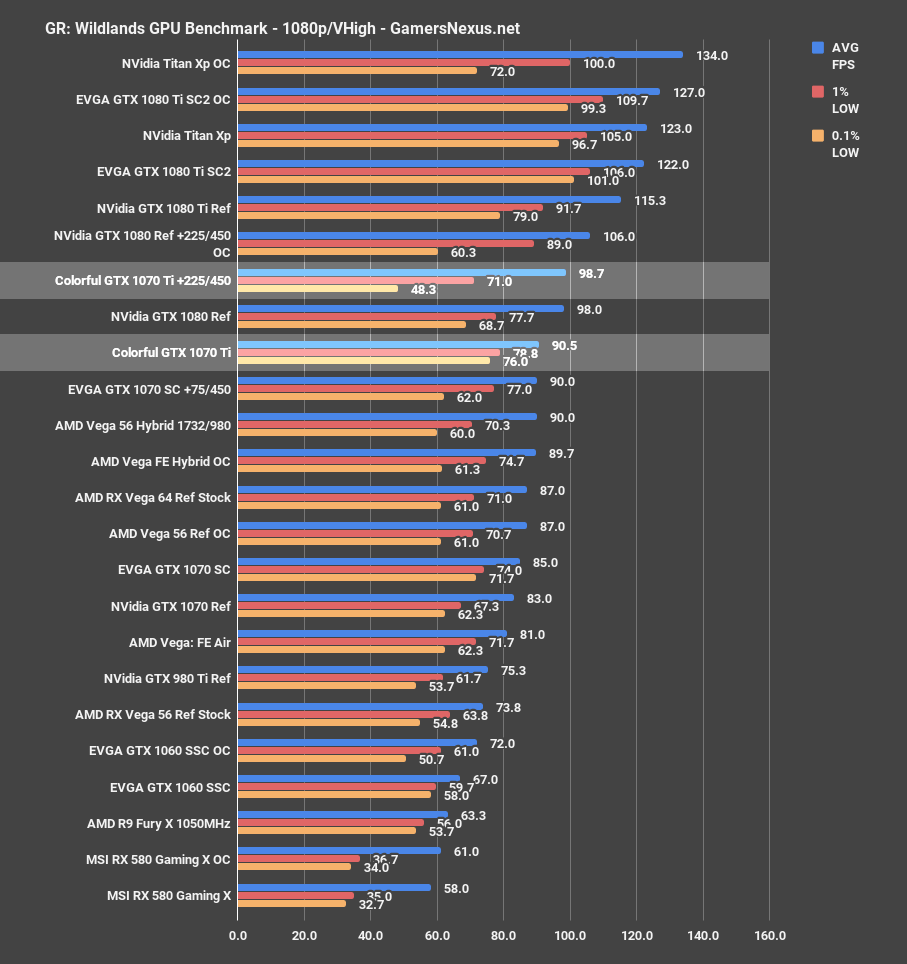 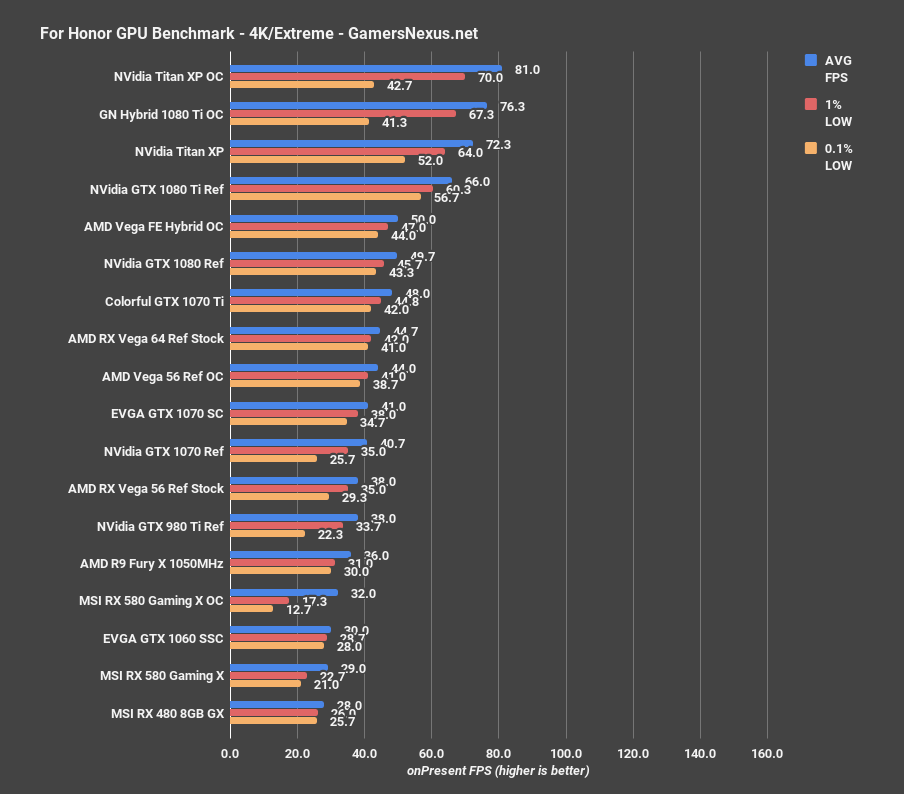 For Honor is tested at 4K, 1440p, and 1080p. This game is particularly unfriendly toward overclocks on both AMD and nVidia hardware, so we generally do not include them. Our Vega 56 OC was stable, for whatever reason, so that’ll be in here. 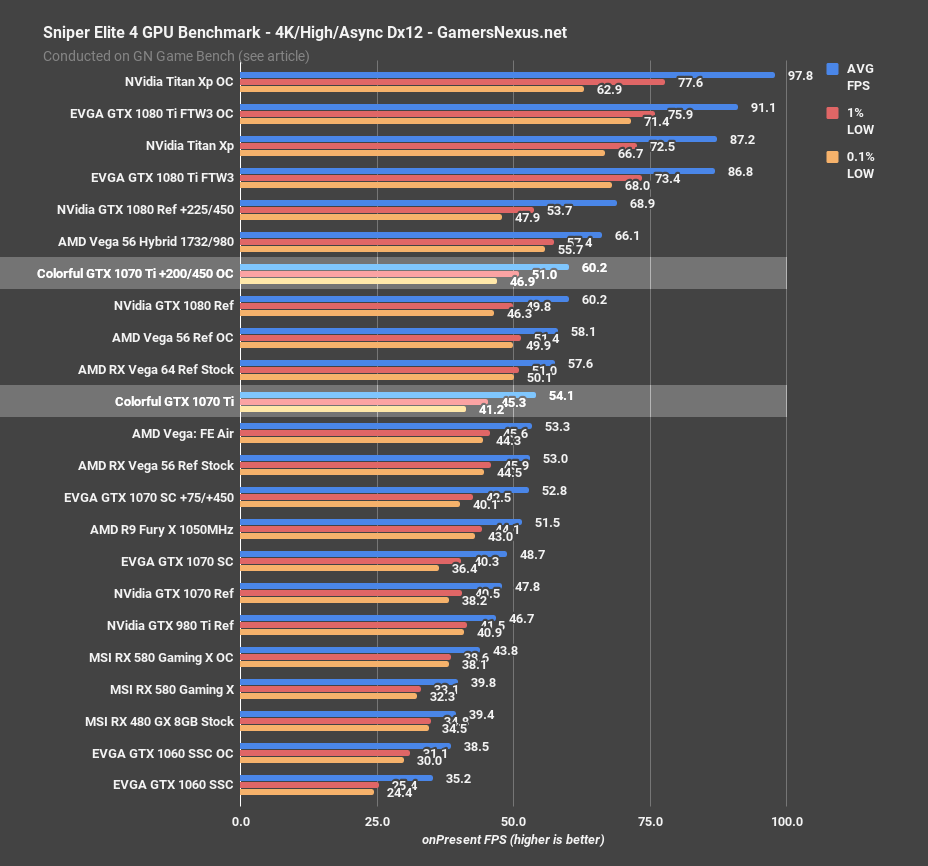 Sniper Elite 4 is tested with high settings and asynchronous compute, using DirectX 12 for the API. Sniper Elite tends to favor AMD devices, which shows a bit here: The Vega 56 reference, stock-clocked card operates a 53FPS AVG, which puts it closer to the 1070 Ti’s 54FPS than seen in other tests. The 1070 Ti maintains a lead, stock-to-stock, of 2% in this game. The 1070 SC overclocked card is functionally equivalent to the stock Vega 56 in performance. As for the 1080, that’s about 11.3% ahead of the 1070 Ti when both are stock, but overclocking gets the 1070 Ti to 60FPS AVG, with the 1080 overclocked to 69FPS AVG. The 1080 maintains a 14.5% lead to the 1070 Ti, in this game, showing that Sniper does actually seem to care about shader count on nVidia hardware.

Ashes of the Singularity Benchmark (4K/High) 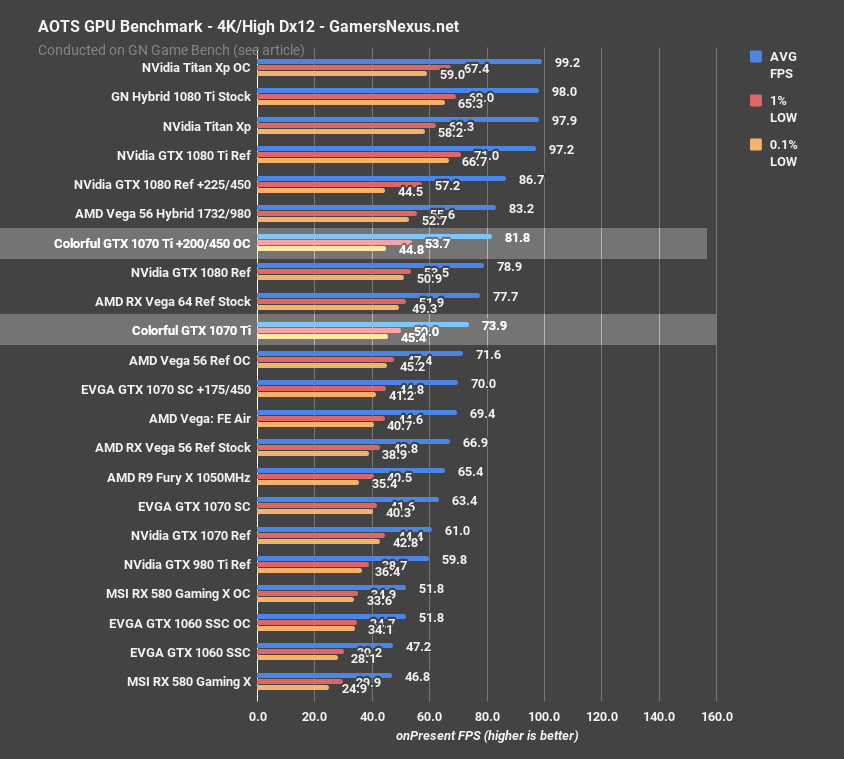 Continue to the next page for Firestrike, Timespy, & Power tests.