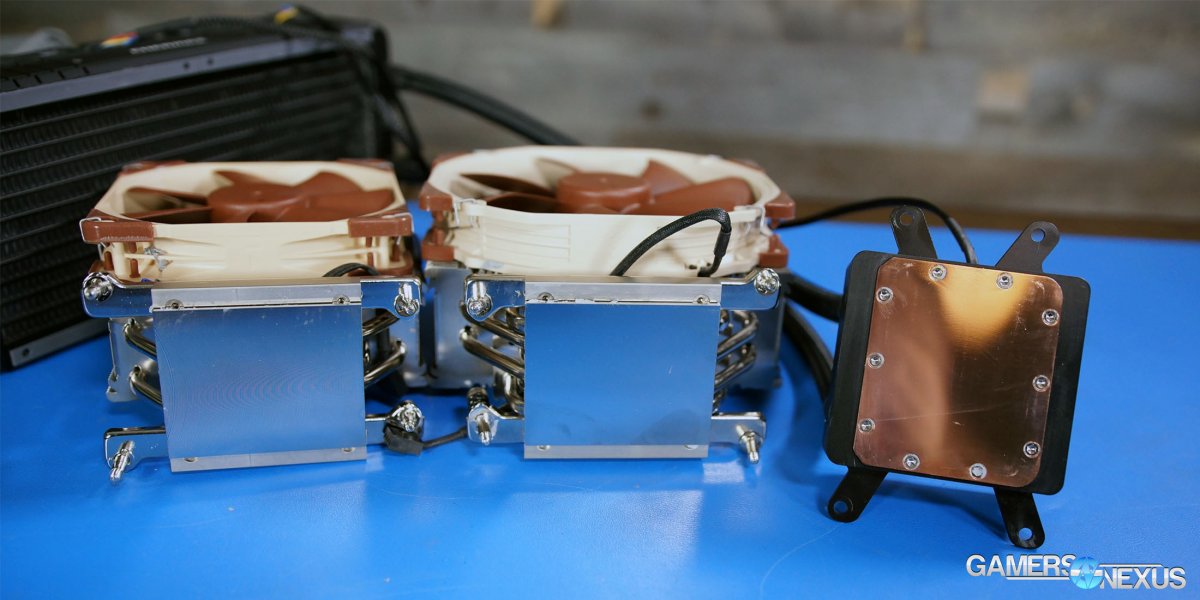 CPU cooler testing is conducted using the bench defined below. We use a bench that is more carefully crafted for noise performance, opting for a passively cooled PSU and 23% RPM 980 Ti blower fan for very low system noise. A passive toggle is used on the PSU during noise testing, and the COV fan is disconnected.

Our testing for Threadripper CPU coolers is only slightly different from our usual thermal testing on Intel liquid coolers. We’ve improved our means of data analytics by modifying how the data is averaged and sorted in spreadsheets, so that’s new, and we’re also using different monitoring software that works better with AMD products.

Part of this testing also includes new load level tests: (1) Prime95 is used in a scripted torture execution, as usual, and (2) Blender is used for a lower thermal load test.

During both tests, we clamp EPS12V cables and log power consumption actively, which allows us to plot second-to-second draw and validate that our software is generating an equal amount of load for each test pass. This is important, as load cycling in software can completely invalidate results (e.g. spiking power consumption by 30W), but you’d never know that it happened without power consumption statistics.

As usual, we are also monitoring ambient second-to-second with a thermocouple, then using that to create a delta temperature profile (over ambient) for our results, matched versus Tdie in HWiNFO64. Ambient is controlled and monitored during testing. Conducting thermal tests requires careful measurement of temperatures in the surrounding environment. We control for ambient by constantly measuring temperatures with K-Type thermocouples and infrared readers. Two K-Type thermocouples are deployed around the test bench: One (T1) above the bench, out of airflow channels, and one (T2) approximately 2-3" in front of the cooler's intake fan. These two data points are averaged in a spreadsheet, creating a T3 value that is subtracted second-to-second from our AIDA64 logging of the CPU cores.

In our data sheets, we are sorting the power cycles such that the heaviest, enduring load cycle is selected for data (ignoring any potential outlier peaks). We are also creating an averaged 10-second peak load temperature metric; although this metric hasn’t proven useful yet, we hope that it might for products which behave with less consistency.

We are using the AMD Threadripper 1950X CPU at 4.0GHz and 1.34Vcore, configured on the ASUS Zenith Extreme motherboard. We are using the same thermal compound for all tests, applying it with a graduated syringe and manual spreading method. This ensures consistency.

To address the first concern of outputting roughly equal power between tests, we clamped the EPS12V cables during all tests for all coolers, then compared power consumption between runs. Prime95 load cycles at somewhat predictable intervals, shown in this over time chart, and we can synchronize our data averaging to only pull data from the peak cycle. The heaviest power cycle produces the most heat, as you’d expect, so we’re averaging from that height. As seen in the chart, the tests align well from pass to pass, validating that our testing was conducted under the same power load. There is some variance, and you should also expect to see about a 4% power consumption reduction from leakage for every 10C the CPU drops, but these numbers are largely the same. That’s what we want.

The same is true for Blender, which produces a highly predictable heat load and power load throughout the testing. We were able to align our data to validate accuracy, averaging again from the peak values.

Before getting to noise-normalized thermal performance at 40dBA, we start with flat-out performance for the Threadripper coolers. Our focus is on the Enermax units, as we already discussed the pros and cons of both Noctua and smaller Asetek block units. 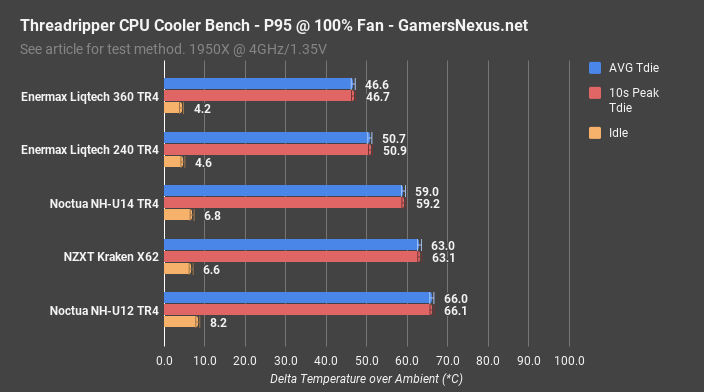 The Enermax 240mm CLC keeps the CPU at about 50.7 degrees Celsius over ambient – we’re looking at delta T versus ambient, here – with an idle temperature of about 4.6C. The 360mm version of the Enermax CLC, also using a full-coverage coldplate, operates at 46.6 degrees Celsius and keeps an idle of about 4.2. Idle is within margins, but the averaged core temperature under load has reduced approximately 4 degrees Celsius from the 240mm unit. At $150 for the 360 and $130 for the 240 unit, you’re paying about an extra $10 per 2 degrees Celsius, if you look at it that way. This is more something that’s done for absolute peak performance or for potentially lower noise-normalized thermals – we’ll look at that soon. Noctua’s NH-U14S maintains impressively competitive performance at 9 degrees warmer than the CLC 240, but is 12.4C warmer than the 360mm unit. Still, for most people, the NH-U14S is going to be perfectly fine – it just comes down to what you’re doing with your CPU, what power is going through it, ambient and case ambient, and how long the uptimes are. 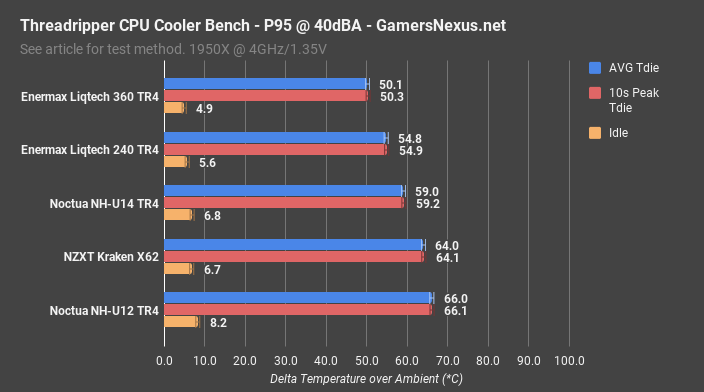 Normalizing the fan speeds to equate a 40-decibel noise level, where the NH-U14S already sits, the TR4 360 now runs 4C warmer, at 50.1 degrees, and the TR4 240 runs also about 4C warmer, at 54.8 degrees. The delta remains the same between the two as previously. This also gets the liquid coolers closer to the Noctua cooler.

Now, theoretically, this does mean that you could further lower the noise floor from our 40dBA read-out, like to 34-36dBA, for instance, and stay below the threshold at which the 240 would need a speed bump. That’s the main way to realize an advantage. 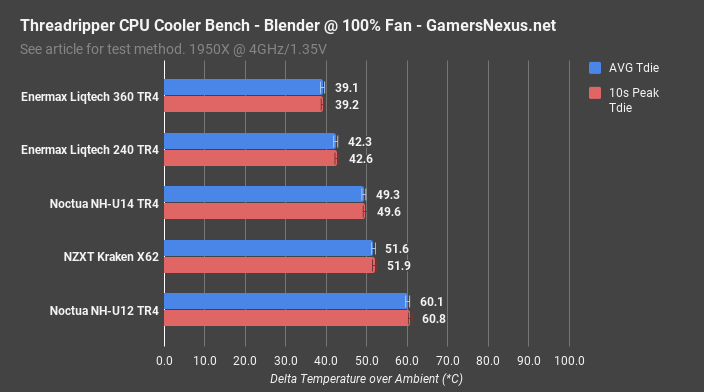 The X62, as demonstrated in previous content, runs at comparatively awful performance given its price. This is due to the limited contact area of the coldplate, something that both Noctua and Enermax resolve with TR4-specific coldplates and coolers. 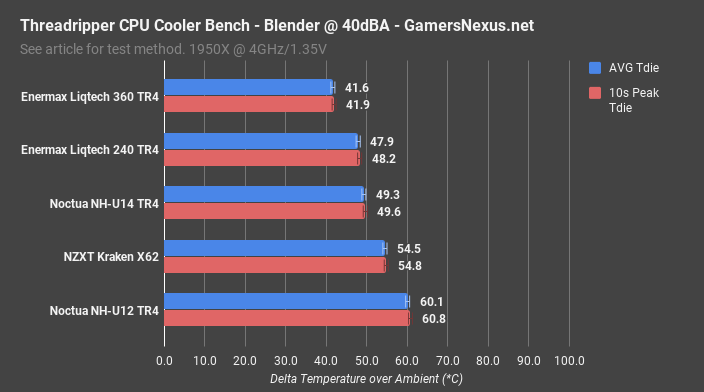 Limiting ourselves to 40dBA, the Blender test has our Enermax 360mm unit at 41.6 degrees Celsius, with the 240mm unit running 6-7C warmer, at 47.9 degrees. The NH-U14S operates at 49 degrees, showing again the value of Noctua’s optimization for what equates a 40dBA output. That said, Enermax is objectively superior with the 360mm unit, and that primarily means that you could run still lower RPMs on the Enermax unit, well beyond when the other coolers enter dangerous territory. It’s just a matter of whether that price bump is worthwhile, with the NH-U14S now at $80. 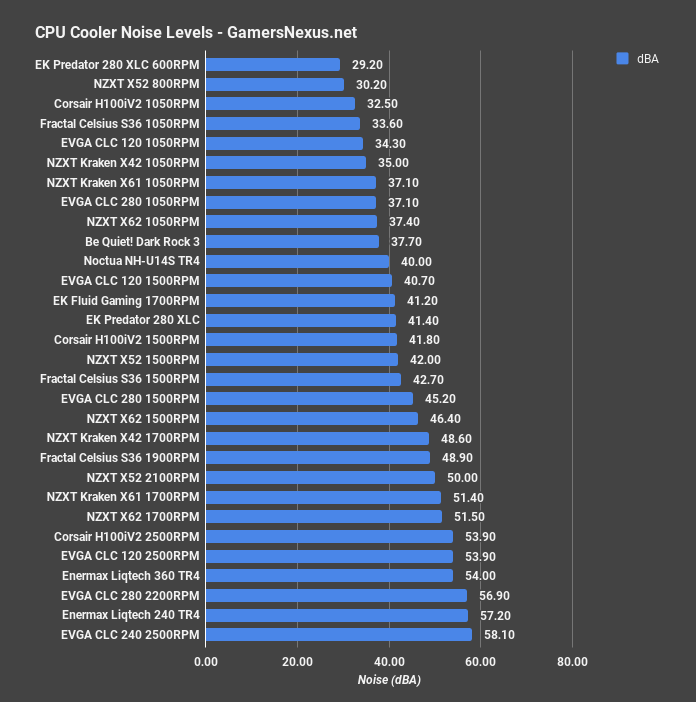 95% of the above coolers shouldn’t be used with Threadripper, but this should give folks a baseline for comparison against products that they may already own, in terms of noise performance at various RPMs.

Three of the coolers we’ve tested on Threadripper have thus far proven good candidates for purchase: The Noctua NH-U14S, at $80, is highly competitive in price:performance and in noise-normalized performance; the Enermax Liqtech coolers, at $130 and $150, prove “best” insofar as peak thermal performance, but are significantly more expensive and enter into the realm of diminishing returns.

The true value of the larger Enermax Liqtech 360 TR4 cooler is its ability to run lower noise output at the same thermal performance of its smaller counterparts. If you’re not planning to make use of that improved noise-normalized performance, there’s not much reason to purchase it. The NH-U14S is enough for most people, particularly at $80, but then again, Threadripper CPUs cost upwards of $1000 – so it’s hard to imagine that another $60-$80 is going to hurt most of those buyers.

If buying the Enermax units, we would strongly suggest creating manual fan profiles to get the most out of them. The only primary downside of the Noctua cooler is limited support for the top PCIe slot, but most TR4 boards have enough x16 slots to make that concern largely unimportant (but that’s not the case for everyone, of course). We think Noctua does well with out-of-box performance, with regard to noise levels (as they compare to thermals), but that Enermax can beat Noctua with regard to noise-normalized thermal performance.

Just depends on what you’re after. The only units we definitely do not recommend are the NH-U12S (120mm version) and the Asetek-made Kraken or other Asetek LGA-sized coolers. The coldplates are too small to work competitively on Threadripper.