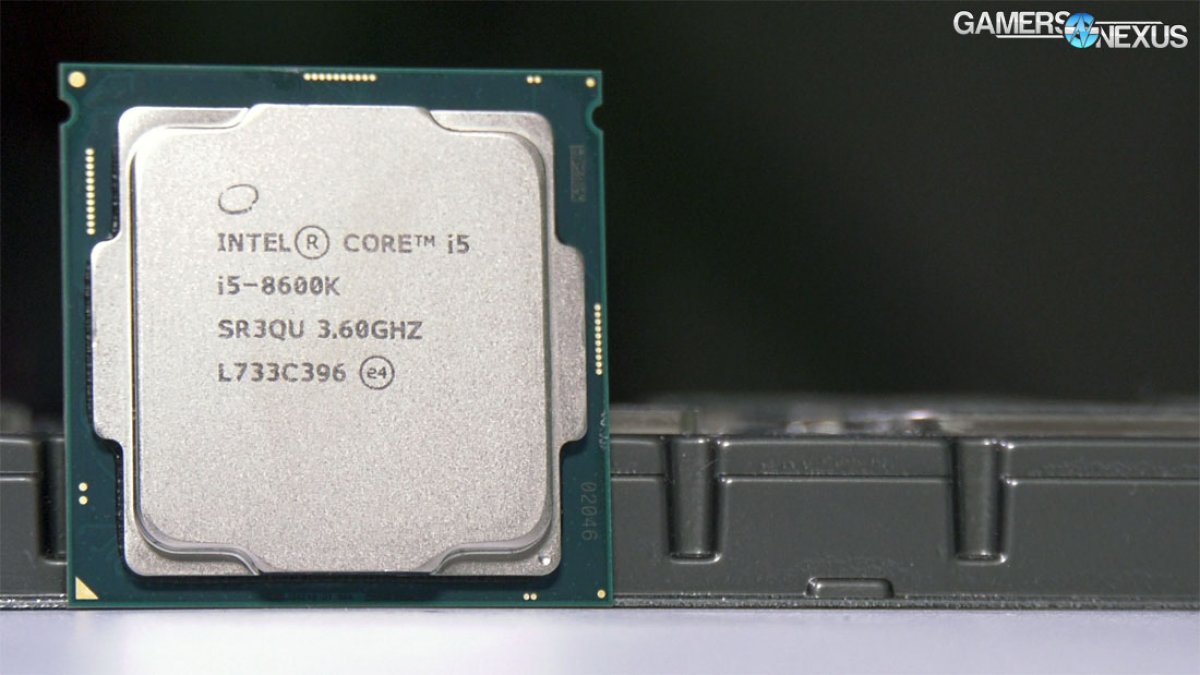 Some of our production and synthetic tests are next. This next benchmark is for Blender, a 3D animation and rendering application, for which we’re using version 2.79 and a few different scenes that we built or modified in-house. These tests are highly thread-intensive, and represent real-world rendering workloads.

Starting with our GN monkey head scene, the i5-8600K stock CPU completes the render in about 39 minutes, ranking it as offering a 9% time reduction versus the 8400, while the stock 8700K’s 26.5-minute render offers a 32% time reduction over the stock 8600K. Compared to Ryzen, particularly the R5 1600X stock CPU, the R5 completes the render in 33 minutes, offering a 15% time reduction over the 8600K stock CPU. Overclocking the i5 gets it nearly to parity with the 1600X, while overclocking the 1600X gets it another couple minutes ahead in time. 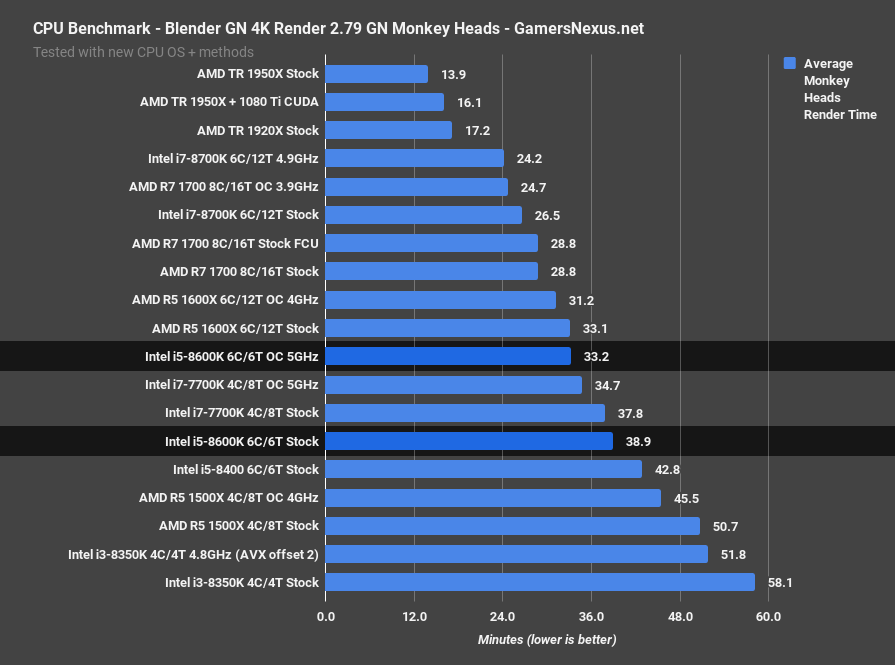 The next scene, our GN Logo render, puts the i5-8600K stock CPU at 46 minutes, which is again 8.7% reduced time from the 8400, while the overclocked 8600K sits a few minutes behind the overclocked 1600X. If you’re planning to do any kind of serious, repeat rendering or 3D work, we would push you toward either the R7 1700 and an overclock or to the 8700K, depending on other needs. If neither is in budget, the R5 is the best middle-step that exists for this kind of work, particularly the R5 1600 non-X, but with a 5-minute overclock. 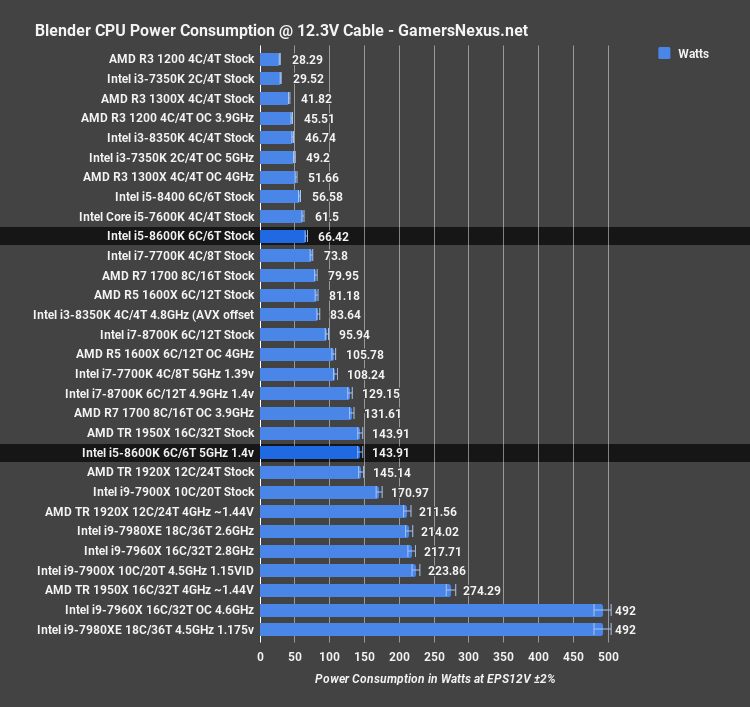 For Blender, we’re measuring the i5-8600K stock CPU at 66W down the rails, which is actually pretty competitive. The R5 1600X was running 81W, a 22% increase over the 8600K – but it also had an inversely proportional decrease in render time, so that’s not necessarily a negative. Overclocking power consumption will entirely depend on what voltage you need to keep it stable; for this AVX workload, we needed 1.4VCore with some LLC tuning, so our 8600K ended up at 144W power draw, equivalent to a stock 1950X – and the rendering performance disparity is several times improved on the 1950X. Intel’s Coffee Lake architecture doesn’t necessarily scale well in power consumption once you start pushing 5GHz. It’s sort of a psychologically nice number to hit, 5.0, but dropping to 4.9 or 4.8 would reduce power consumption significantly in cases where a Vcore below 1.4 can be sustained. The overclocked R5 1600X, for comparison, is at 106W draw, making the overclocked 8600K consume 36% more power than the R5, while performing slightly behind. 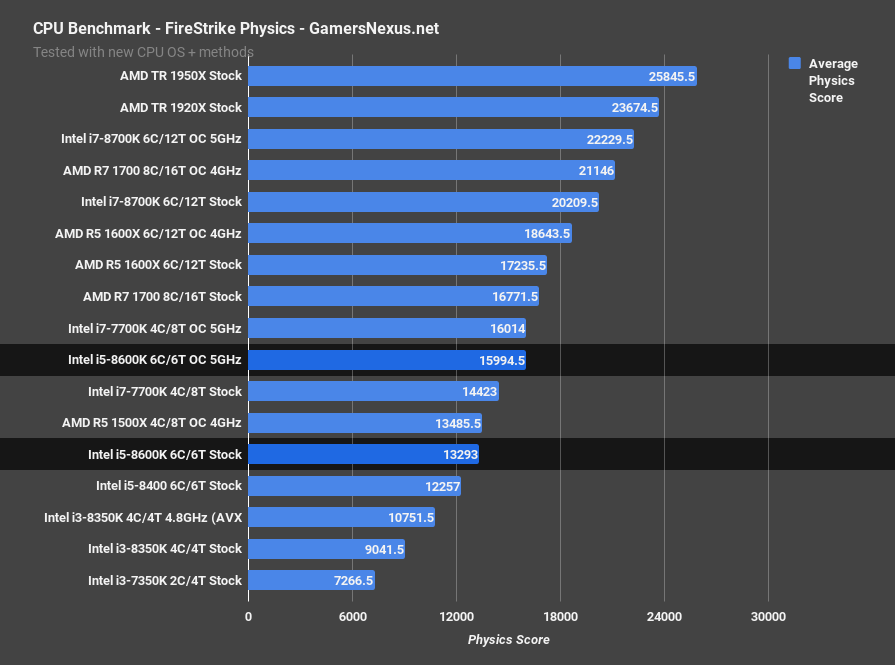 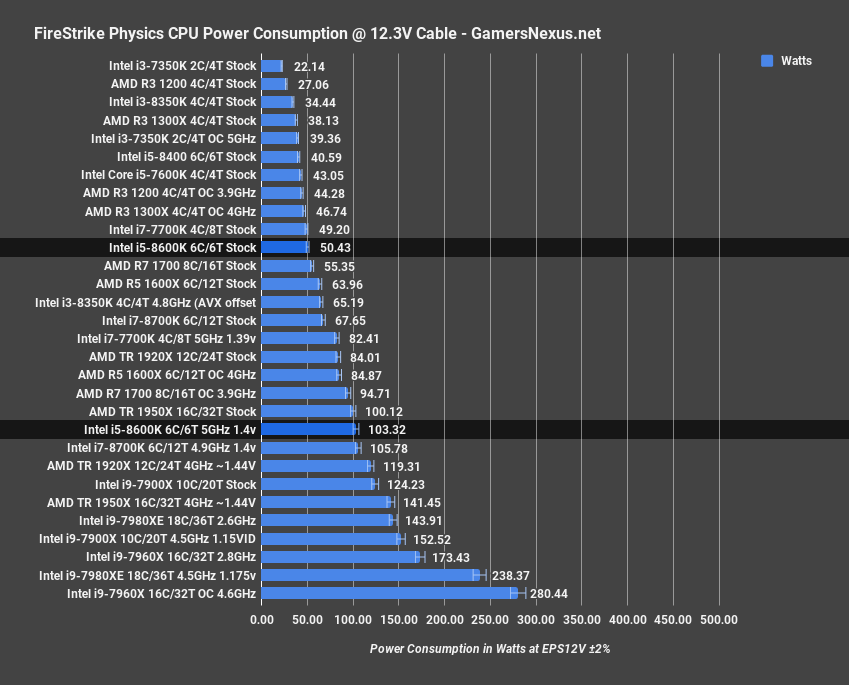 As for power consumption required to drive these scores, the 8600K draws about 50W stock, or double that – 103W – when overclocked at 1.4V. Again, a lower voltage and frequency would drop this. The overclocked 8700K draws about the same amount of power with a similar clock, but achieves 40% greater performance. 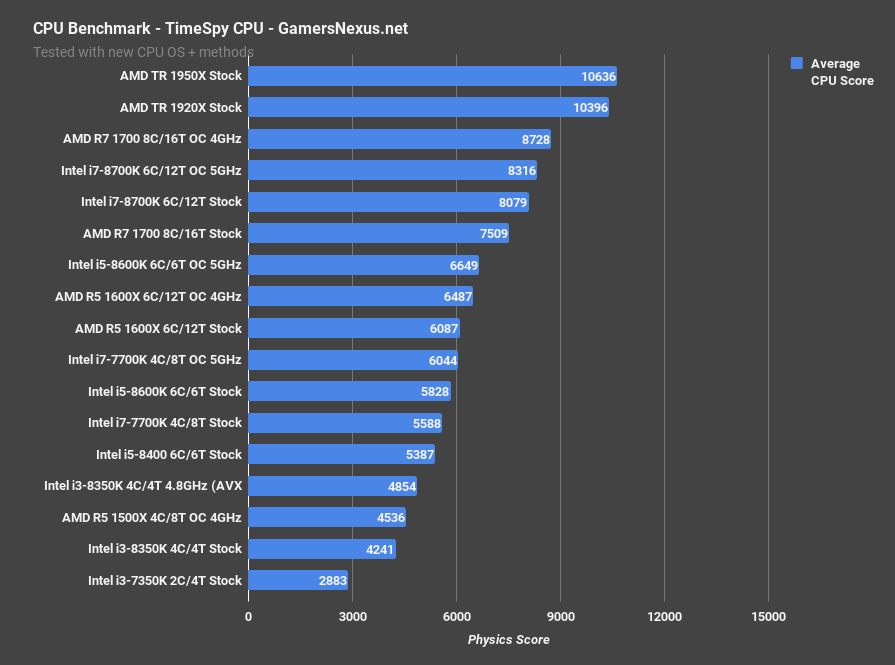 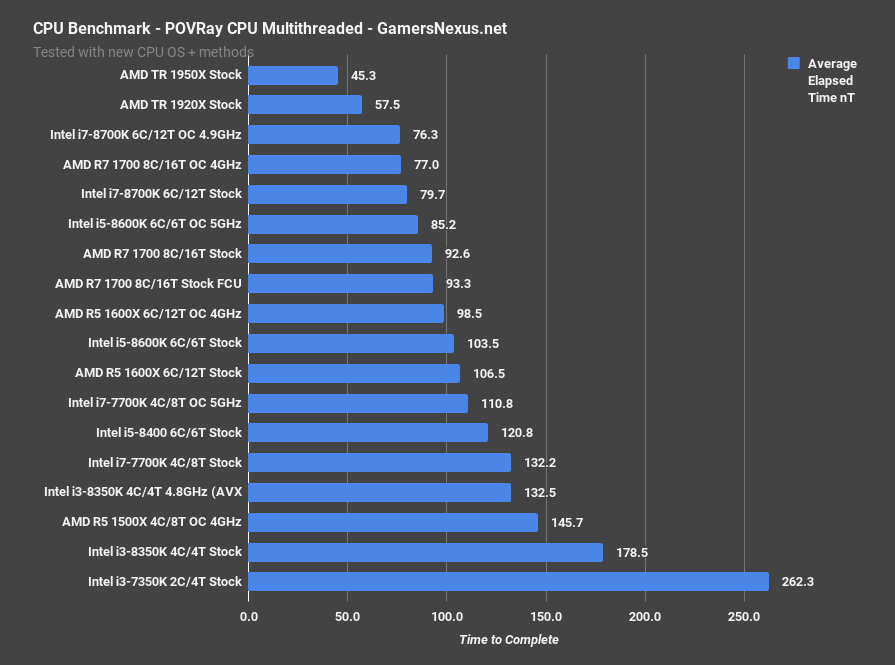 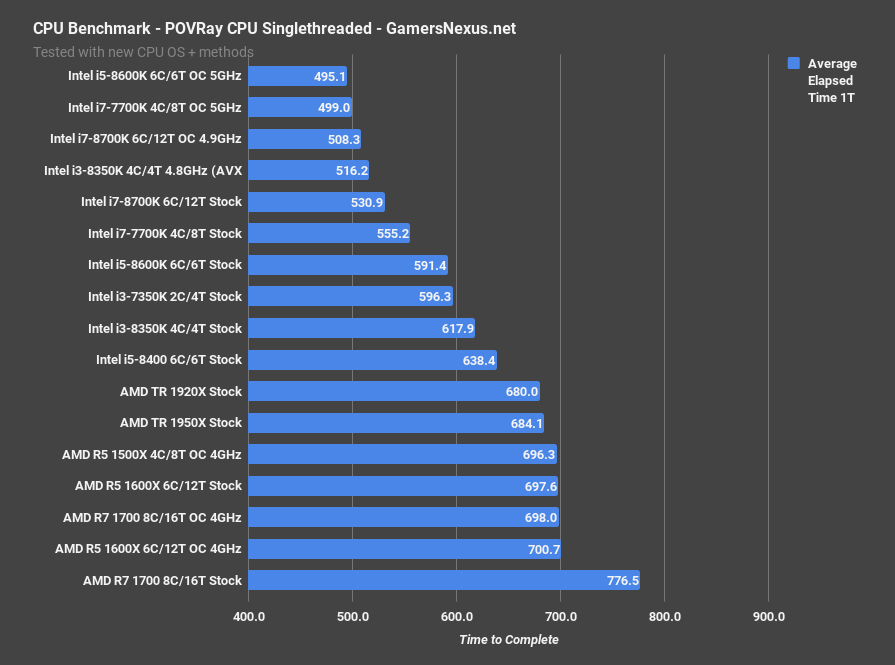 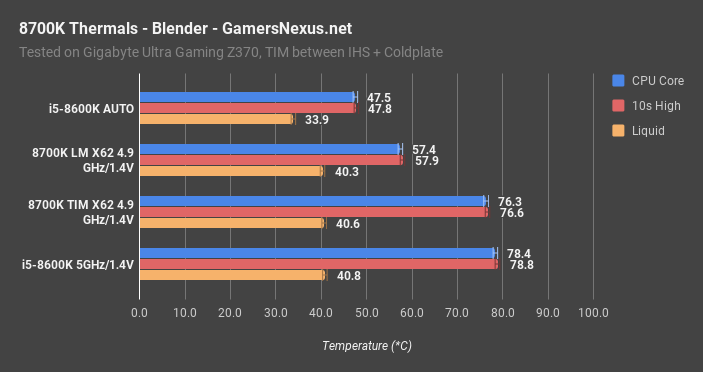 We’re keeping thermals short for the video, but you can find an extra chart or two in the article that’s linked below. Using our X62 at max speeds, as always, the 8700K and 8600K are the most directly comparable products: With a Blender workload and our max stable OC on each device – roughly 4.9-5.0GHz at 1.4VCore – the 8600K operates an average all-core temperature of about 47 degrees Celsius when left to auto. Overclocked, we end up about the same, once again. Liquid temperatures max-out at 40-41 degrees, reinforcing Intel’s use of upgraded TIM on Coffee Lake. As we understand it, the 8700K and 8600K use the same compound as the HCC CPUs from Skylake-X, which moved to a better TIM than the previous lower core-count CPUs. The 8600K isn’t too difficult to cool until running a Prime workload, which is comparable to Cinebench, while also overclocked. It is at this point that we near the 90s. Still operable, but pushing it. A delid certainly isn’t required on these CPUs, but would allow you to use a smaller cooler while achieving similar thermal results. 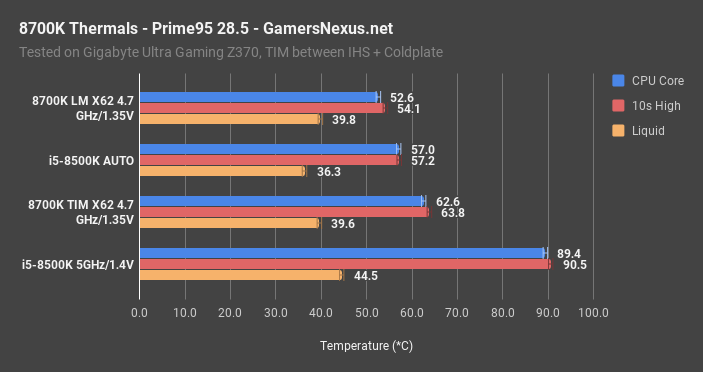 The Intel i5-8600K is a return to an old argument. Before Ryzen’s launch, and before the i5-7600K, the fact was that most i5 CPUs were perfectly adequate for gaming, if not more than adequate. As the i5 lineup aged, though, a game would occasionally fall through the cracks for more frametime variance, and then the R5 lineup shipped. The AMD R5 CPUs were far more competitive with Intel than the R7 CPUs were, when considering same-cost gaming-targeted chips. For R5s, they kept up well enough with Intel in gaming and offered greater room for hobbyist production that, overall, the CPUs just made more sense than an i5.

Now, though, the i5s are giving AMD a fight. The i5-8400 would make more sense with a B360 or H-series motherboard, and so it sits this round out until more appropriate motherboard options ship. The i5-8600K, however, is fully overclockable and belongs on a Z370 board, even if one of the cheaper ones. The 8600K and 8400 alike reintroduce the “an i5 is fine for gaming” argument, but it is primarily in the context versus an i7 – just like it used to be, back when AMD couldn’t dream of competing (see: FX series).

And that has shaped up like this: An i5-8600K, for a person who is primarily playing games, is more than adequate when compared to an i7-8700K. In most instances, ignoring special use cases like livestreaming via H264, production tasks, or 144Hz framerates, an i7 would be excess spending. The i5-8600K’s high frequency and core count make it fully capable of gaming at its own similarly high framerates, and significantly more mobile and future-looking than the 7600K was.

That said, it’s also $300 today, at time of writing, and that means it’s not really competing with the R5 1600 – as names would suggest – but the R7 1700 (+ OC) CPUs. For gaming, sure, an 8600K is a great buy. The extra two cores help, but not enough to make up for deficit in things like Blender. A lot of people don’t use things like Blender, don’t do 3D modeling, don’t do rendering – those people can still look toward Intel, just note that we believe the 8600K should be closer to $200-$250, not $300. For folks who do intend to spend a reasonable amount of time doing workstation tasks, Ryzen still looks like the best value for that.

The 8600K is a superb overclocker, though, making it fun to play around with as an enthusiast. It’s also among the highest two performers on our gaming benchmarks, for which it deserves great credit. The i5-8400 or R5 1600(X) CPUs both offer potentially better value, diminishing returns considered versus spend, but it just depends on the price category of the build.