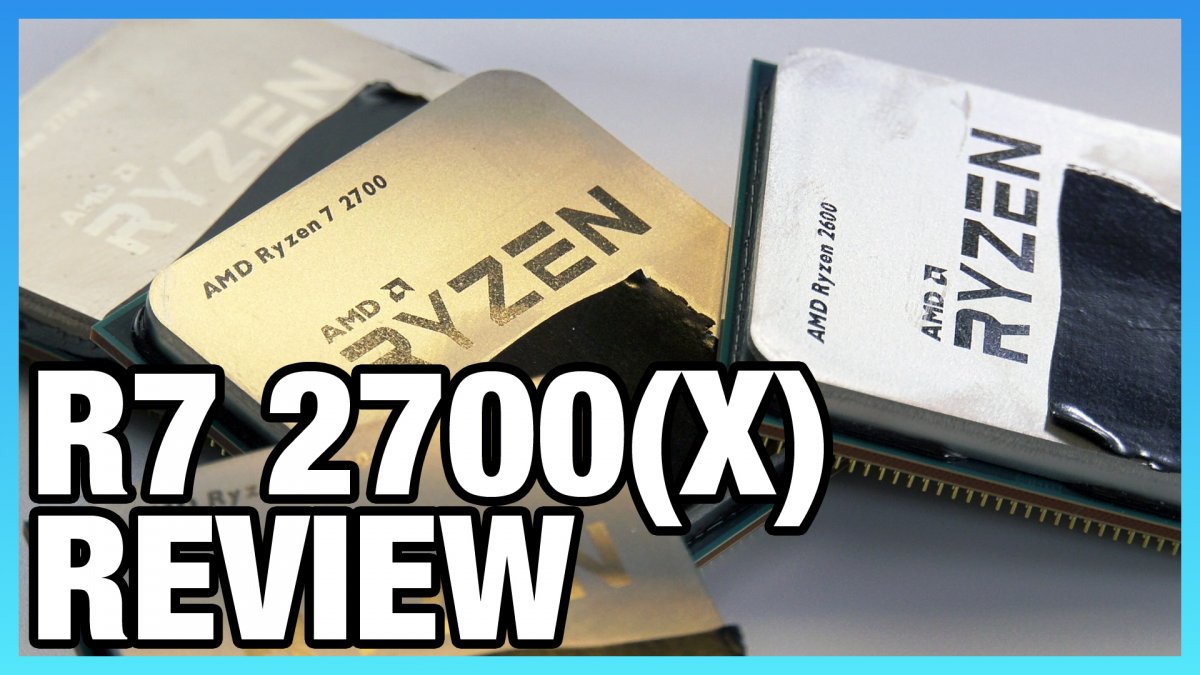 Game streaming is tested on Gigabit Fiber internet, with active monitoring for packet loss or network-side errors (there were none). We use OBS v. 21.1 for livestreaming, and configure 1080p/60 for the stream output. Encoding is set to H264 with Faster settings, used for what we consider to be a high-quality stream at 10Mbps. We also test with 12Mbps at Medium encode settings, meant to serve as a torture test for when differences fail to emerge at more reasonable 10Mbps/Faster settings. Streaming requires both a quality streamer-side framerate and quality viewer-side delivery. It is impossible to deliver greater than the specified framerate of 60FPS to the viewer and playback service (Twitch, YouTube), and so a “perfect” score would be 100% frame delivery within 16.67ms per frame.

We actively log framerate performance for five minutes in DotA2 and DiRT Rally, with Playerunknown’s Battlegrounds (PUBG) logged for ten minutes. Multiple passes are conducted. We store all final MP4 clips locally and analyze them for further data validation and to calculate dropframes. YouTube plays back the livestream on the same host system, which increases load further and creates a real streaming experience.

We also log “baseline” performance metrics; that is, performance without any active livestream. The goal is to determine performance scaling and loss from baseline when adding a stream, which aids in determining the efficiency of a particular processor at juggling a game and a stream simultaneously. This also helps us understand scheduling.

A lot can be done to further tune and improve player and viewer experience with streaming, like process priority tuning and affinity tuning, which we’ve previously demonstrated as helpful with Intel scheduling.

NOTE: This section relies heavily upon references to video playback to better illustrate streamed quality and output. Please refer to the video (first page) for this playback.

Let’s move into game streaming benchmarks next. In the video, we open by showing PUBG at 10Mbps and Faster on each side of the screen. One is the 2700X, one is the 8700K, neither is overclocked. Our baseline test for a good quality stream is 10Mbps upload with H264 Faster enabled. If all CPUs pass that, we stress test them with X264 Medium and 12Mbps uploads. Our goal is to upload 100% of the frames to the stream and drop 0, ideally all near 16.7ms delivery times. We also want to lose as little FPS from baseline non-streaming gameplay as possible; in other words, we care about the scaling of how each CPU handles streaming. Our goal is efficiency in delivering a 60FPS stream, which would be considered perfect without dropframes, while also maintaining a high player-side FPS.

We’re starting with PUBG and with streamer-side FPS, so this is what the streamer would see, not what the viewer would see. Both are important parts of the equation.

For the streamer, we’re observing a baseline FPS of 132 AVG for the R7 2700X when stock, which decays to 101FPS AVG when streaming at 10Mbps Faster. The 1% lows also dip relatively proportionately, to 57FPS. At 12Mbps and stressed with a rather unrealistic Medium encode speed, but used as a synthetic test, we fall to a still fully-playable 83FPS AVG and 47FPS 1% lows.

The 8700K’s baseline is hitting framerate cap, and averages at 141FPS. It’d be higher without that ceiling. We’re at comparable low values to the 2700X. Streaming at 10Mbps Faster brings us to 124FPS, or 107FPS for Medium.

As for which was which, we can pop-up the labels now for the 8700K and 2700X from that earlier footage (see video). Technically, the 8700K is in the lead for streamer-side performance, but that’s only half of the equation.

Viewer-Side Performance in PUBG (Ryzen vs. Intel for Streaming) 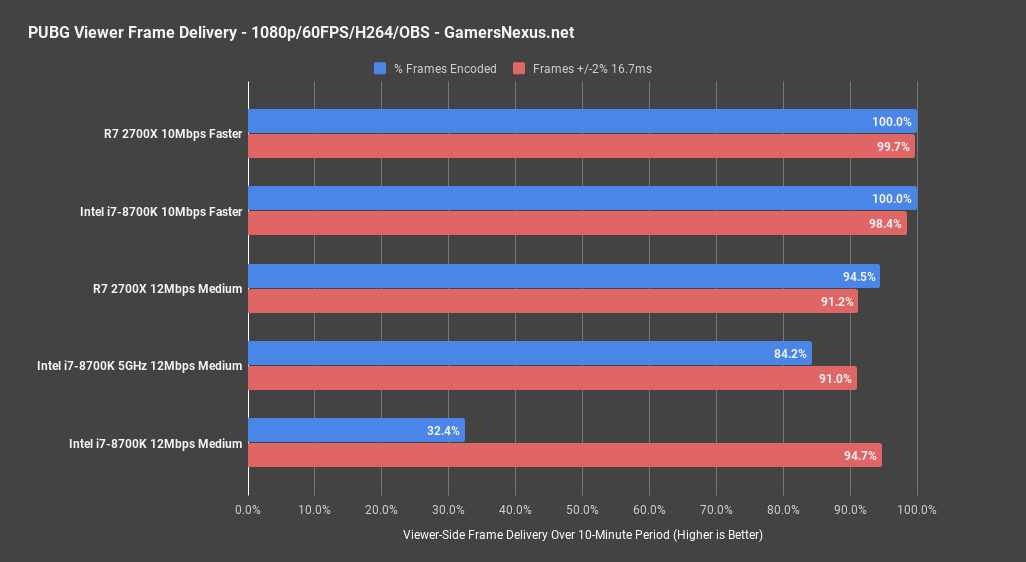 For the viewer-side, things change a lot – and quickly. First off, both the 8700K and 2700X stock CPUs deliver 100% of frames to the stream at our 10Mbps Faster preset, with 98% to 99.7% of frames delivered within our 16.7ms target. This is excellent performance for each CPU, and either is fully capable of gameplay while streaming.

Notice, however, that the 8700K crumbles when pressed with H264 Medium and 12Mbps encoding. We end up at 32.4% of all frames delivered, meaning that the stream drops 70% of frames. We’ll show those videos side-by-side now (see video). We overclocked the 8700K to see if performance could meet the stock 2700X, and found that it still under-delivered at 84.2% of all frames. This disparity is partially a result of the 2 fewer cores, and partially a result of scheduling. More resources were spent on the game than OBS. This can be rectified with manual affinity and priority tuning for OBS, but it’s extra work for the streamer.

Here’s the player-side performance for DOTA2. In terms of raw FPS, the 8700K easily chart-topped, as Intel often does in DOTA2. This game is heavily dependent on 1-2 threads, and that’s why we see the frequency advantage. We’re at 181FPS AVG versus 149FGPS AVG, with lows reasonably comparable and within DOTA’s variance.

At 10Mbps, those numbers are 138FPS AVG and 108FPS AVG. 12Mbps and Medium puts a huge strain on each CPU versus baseline, producing large losses as resources reallocate to the stream. 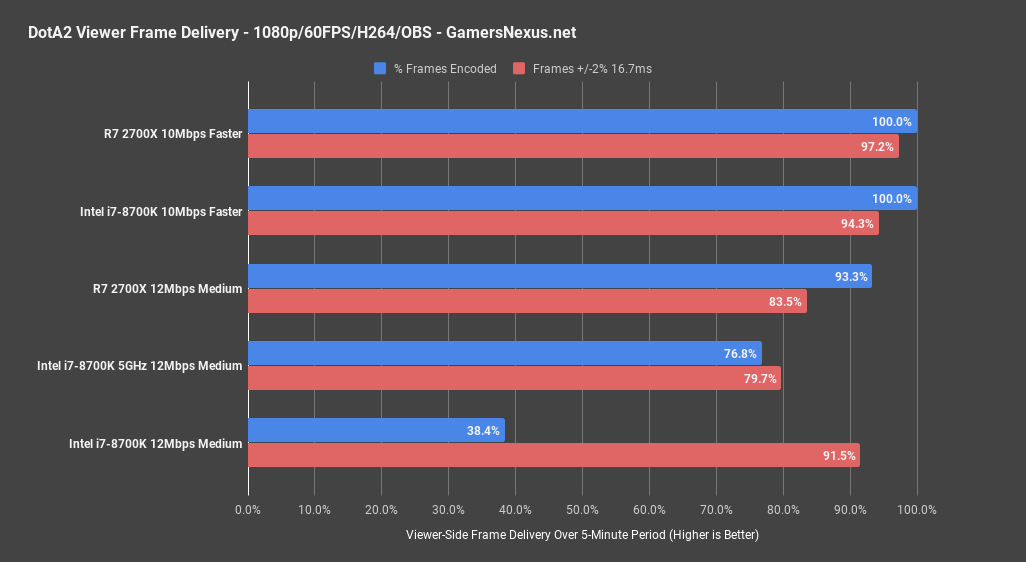 Here are the streaming results: At the good quality setting, we’re at 100% of frames encoded on both the 8700K and 2700X, with frametime consistency both good. At 12Mbps, we lose 60% of our frame delivery on the stock 8700K, and about 7% of our delivery on the 2700X. Here’s a comparison of the 12Mbps playback on both Intel and Ryzen, put next to each other. This is, again, a thread and scheduling advantage. Ryzen has more threads to throw at encoding in the Medium configuration, which matters far more than the frequency for this task; where AMD is behind in FPS streamer-side, it is far ahead in viewable stream quality. Intel is killing AMD in raw framerate streamer-side, but getting killed in viewer-side playback. In this workload, the viewer-side playback matters most. Overclocking Intel helped tremendously, but not enough to come close to the 2700X. Again, tuning with priority and affinity would largely rectify this, but that’s asking for a lot of extra work. You could also cap game framerate to further relieve Intel’s resources, but the point is that the 2700X is natively more advantaged than Intel here. We didn’t need to overclock the 2700X to sustain reasonable quality.

For some production benchmarking, we’re using Blender 2.78 and 2.79 for in-house render benchmarks. The newer Blender 2.79 GN Monkey Head render places the R7 2700X towards the top of our charts, requiring 23 minutes to render when stock, using X370, and basically the same amount of time when using X470 and stock settings. Running 4.2GHz all-core doesn’t get us much, considering how XFR2 works, and pushes us to 22 minutes. Again, consider that this is functionally pre-overclocked, hence the limited difference between manual overclocks. 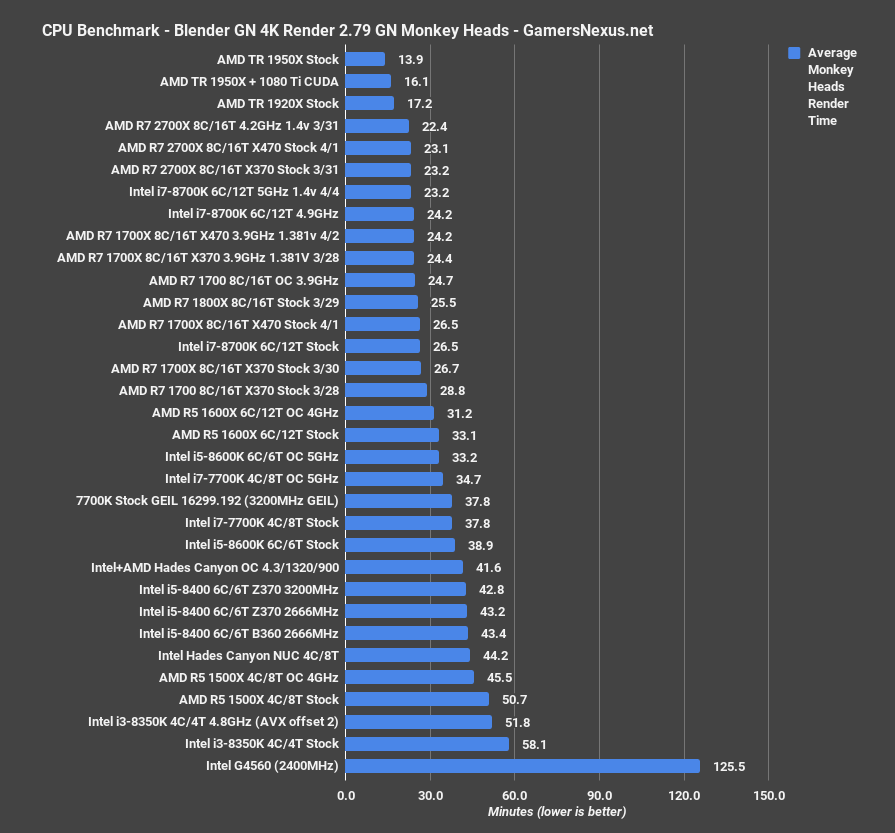 For comparison, the Threadripper 1920X stock CPU completed its render in 17 minutes, about a 25% time reduction. The i7-8700K at 4.9GHz finishes its render in 24 minutes, marking the stock 2700X as 4% reduced in time. Going to 5.0GHz mostly ties the two, with an overclock on the 2700X pulling it again about a minute ahead. When overclocked, the 8700K is functionally equal in performance. Stock, however, the 8700K ends up at 26.5 minutes, allowing the 2700X stock to reduce its time requirement by 12.5%.

The 2700X stock CPU is also approximately 13.5% reduced in time requirement from the stock, original 1700X that we retested on the X470 board.

Our GN logo render test is the most abusive, and stressed the 2700X overclock to a point that we could not achieve stability at 4.2GHz, and it wasn’t worth going to 4.1GHz, since that’d result in equivalent or worse performance than stock with XFR2.

For this one, the 1920X leads the 2700X stock CPU on X470 by 28% time reduction, a substantial change for anyone serious about CPU rendering. The 8700K overclocked at 5GHz lands at 28.6 minutes, allowing the 2700X a 2% time reduction over the high-end Intel CPU. Of course, note that we don’t have any Intel HEDT parts on here presently, as those have all been busy with RIPLTT streams and other ongoing content.

Continue to the next page for gaming benchmarks on Ryzen 2.