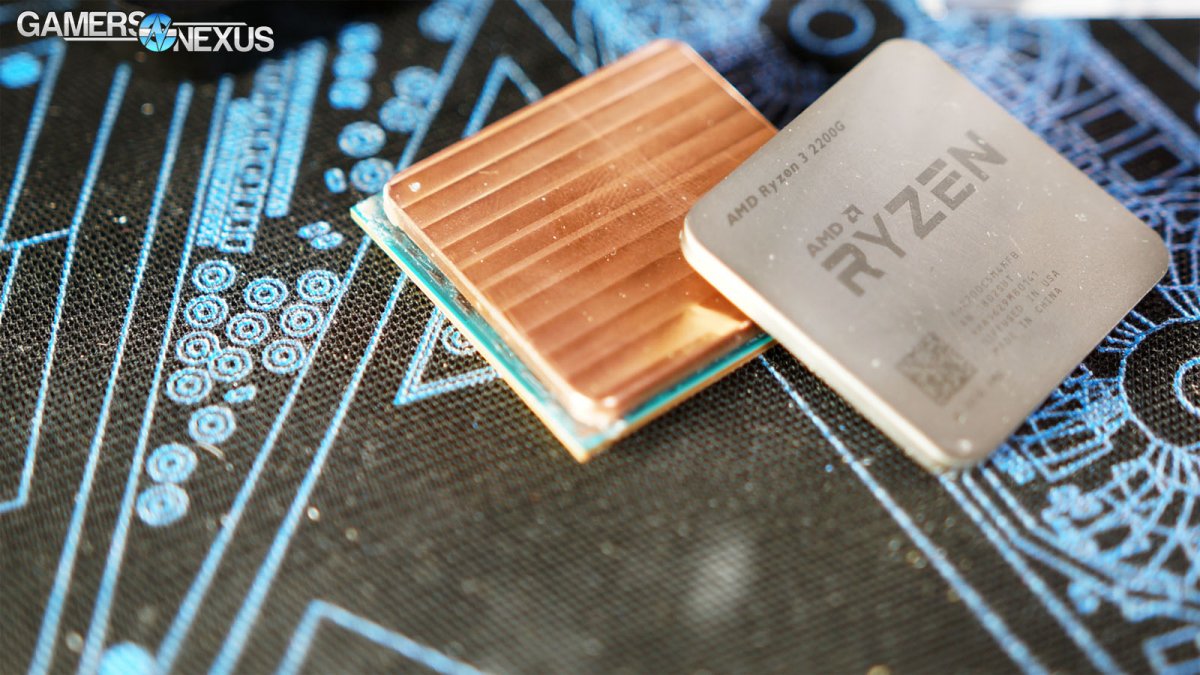 First a note: We’re jamming 1.4V into the APU at just 3.8GHz for the CPU clock speed. The GPU component is not put under load during this test, as we’re focusing on generating significant heat from power virus workloads that leverage AVX instructions exclusively. We also were not concerned about a maximum OC on the frequency, just with generating a lot of heat. The 1.4V does that. LLC 8 is used on the C6H.

Entering into this, we had a pre-existing hypothesis from our extensive work on delidding and testing Intel CPUs. We believe that the thermal paste under the IHS is not the only contributor to thermal performance, and that delidding the CPU improves performance at least partially because of the removal of silicone adhesive around the edges. The silicone adhesive layer creates unnecessary height between the die and IHS, which then has to be filled with more paste than desirable to ensure contact. By replacing the paste and removing the adhesive, thermal performance should improve significantly.

These are the primary items under test today: 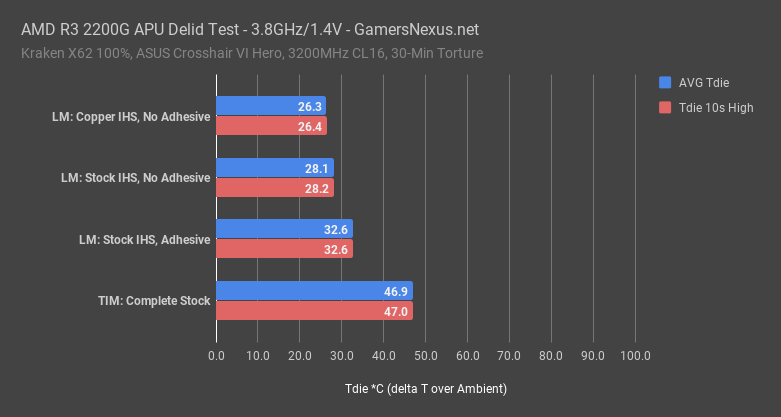 The Rockit Cool copper IHS is the highest performer on the chart, exiting error margins and plotting a two-degree improvement over the next best, which is the stock IHS with the silicone adhesive completely removed. That marks us at 28.1 degrees over ambient for Tdie. Both of these tests used Thermal Grizzly Conductonaut, found on Amazon here, and had the silicone adhesive completely cleaned off of the substrate and the IHS. The next test is our delidded thermal result with silicone adhesive still present on the substrate, but with liquid metal applied and, obviously, a delidded processor. That had us at 32.6 degrees over ambient, showing a 4-degree improvement to 28.1 degrees, where we ran the same test, but without any silicone adhesive present. The reduction in the gap between the IHS and die is responsible for this performance uplift. Note that this is outside of error margins.

For reference, we previously measured the stock 2200G with stock TIM and adhesive at 47 degrees Celsius over ambient, marking minimally a 14-degree reduction to our delid with liquid metal. Delidding and painstakingly removing all adhesive got us another couple degrees. The Rockit Cool IHS does offer benefits that exit error margins and are measurable, and it’s to the tune of about 2 degrees Celsius. Not world-rending, but certainly measurable.

Conclusion: Is A Custom Copper IHS Worth It?

For Coffee Lake, we observed closer to 4-5 degree improvements with the custom Rockit Cool IHS. Our conclusion for that part was pretty simple: At $20, for 4-5 degrees, you’re looking at a fun weekend project. It was basically something to do if you really just want to play around with computer hardware for a few hours. Unless you’re really pushing obscene overclocks but still on ambient cooling, there’s not a ton to gain from these copper heatsinks. That said, we do like them; we liked the Intel-sized one a lot, as a $20 price is low enough to impulse buy, it’s fun, and you do get a couple of degrees reduced. That might be enough to reduce fan speeds a bit and reduce system noise levels, but more realistically, it’s just something fun to do.

For the APUs, we observed reduced benefit to the copper IHS. This is likely in part due to the lower heat flux of the AMD APUs versus something like Coffee Lake, which can pull significantly more power than the APUs.

Ultimately, we still think it’s potentially worth delidding the APUs, though the copper IHS isn’t necessary. Delidding isn’t either, to be fair, but if you’re using it in a living room HTPC and demand silence, delidding drops thermals enough that you could then drop fan speeds, ultimately meeting the original lidded thermal result, but with significantly quieter fans. Rockit Cool’s delidder works great for this and is something we can recommend, alongside Thermal Grizzly Conductonaut for the liquid metal. The IHS is only worth adding to the cart if you want something unique for your processor. The thermal benefit exists, but is not appreciable. The value of that is up to you.