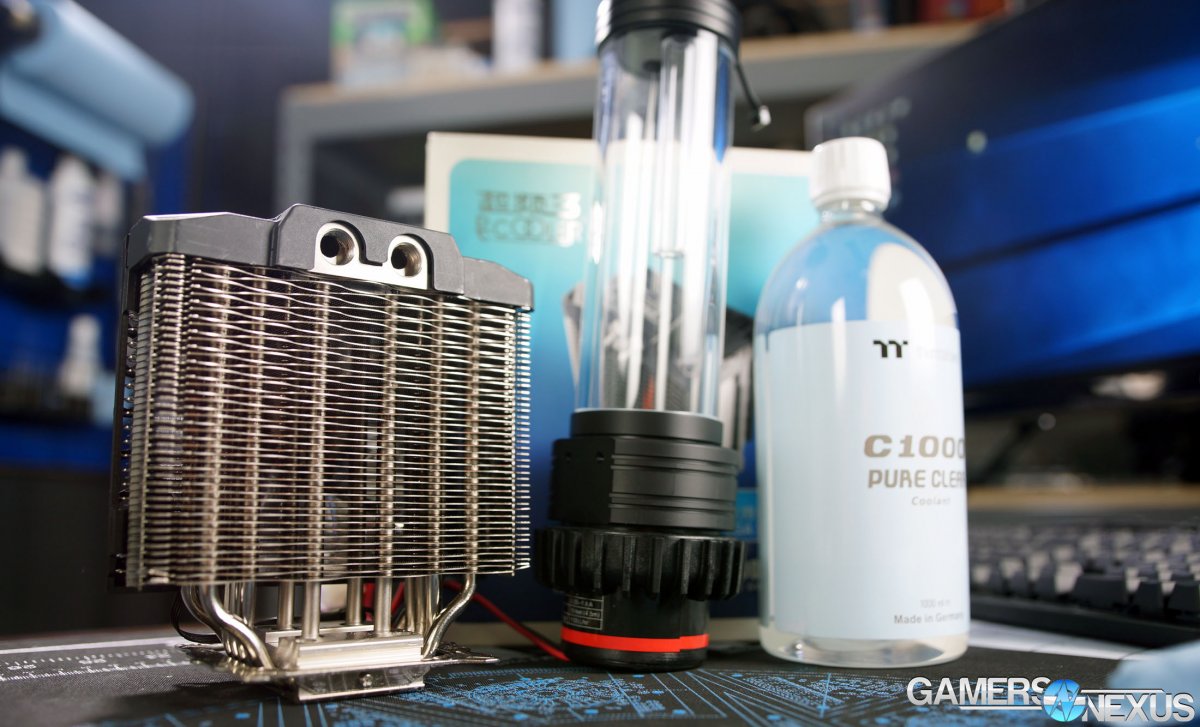 Getting this cooler working was a bit of a struggle. It was some parts human error, on our end, and some parts mechanical error. This thing is a $100 cooler from Aliexpress, and it uses both open loop liquid cooling for a few of its pipes while also using traditional air cooling and heatpipes. We had some small (read: significant) leaks during our livestream, and after the stream, we discovered that the screws securing the inlet manifold to the tower were loose, causing significant leakage as the water filled the pipes. After fixing this, we were finally able to fully test this truly unique hybrid water-air cooler.

The cooler is an interesting one. We’re planning a separate tear-down of the cooler to see what’s going on under the coldplate – likely not much – but for now, we’ve done exhaustive thermal testing under various conditions. Some tests were just straight pump/reservoir hookups to the cooler, while others included a 360mm radiator and 3 high-end fans. The W120 has been sitting on shelves for a while, clearly, as it was first shown at Computex 2011, and the box we received had dried thermal paste and yellowing on the product box. We still wanted to test it, as the unique combination of G-1/4” fittings, open loop support through 4 water pipes, and traditional air cooling meant the cooler could perform peculiarly. You’d assume that there’s a reason this isn’t really done, but we still wanted to find out why.

Let’s start with only the W120, just so we know what we’re dealing with for internal comparisons. 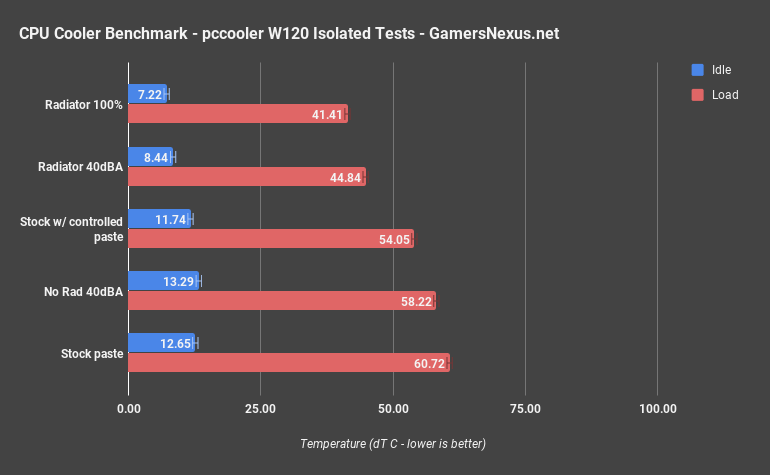 In full stock configuration, including the stock, age-hardened thermal paste, the cooler kept the CPU at about 60.7 degrees Celsius over ambient, which is one of the worst results we’ve ever recorded on this bench. Remember, this is without any radiators, and just a straight pump to and from the cooler. The stock fan is mounted to the finstack.

Replacing the thermal paste dropped temperatures by 6 degrees. As always with our cooling testing, this was conducted with three repetitions and averaged. The results were consistent with a 6-degree reduction against the included paste. For reference, we also have a photo of the cooler with the original paste after removal – you can clearly tell how hardened the paste has become. Curing will limit the thermal efficacy of this compound. 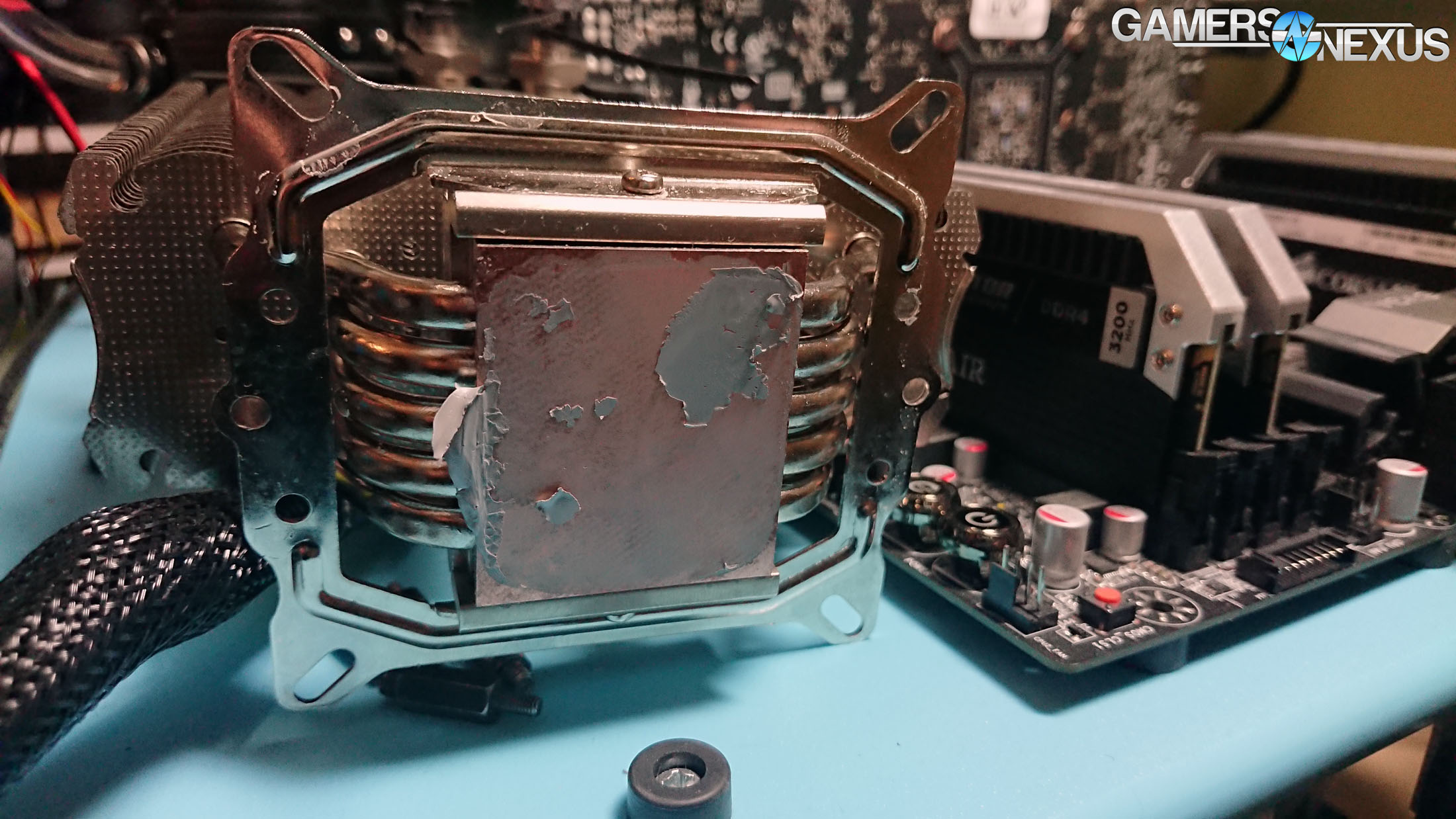 Back to the chart, a stock test with our standardized thermal paste had us at 54 degrees over ambient. Adding a Thermaltake 360mm radiator and three high-end fans – two Corsair MLs and one Noctua A12 – resulted in a reduction over ten degrees Celsius. This is more a testament to the fans and radiator than anything. Rising water temperatures required the extra cooling power directed straight at the liquid.

Noise normalized, the stock setup operated at 58 degrees, with the radiator version at 45 degrees. 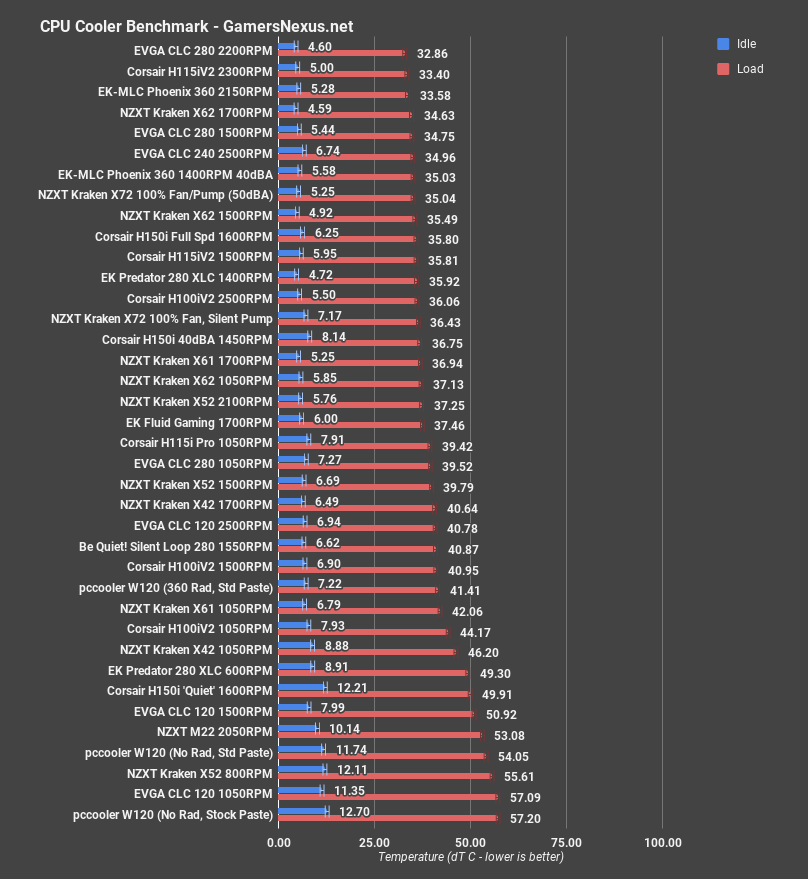 Moving on to comparative data with other coolers, the pccooler W120, using our controlled, standardized paste and no radiator, landed between an NZXT M22 120mm closed-loop cooler and EVGA CLC 120 at a lower RPM. This places the W120 as well below the X42 with a very low fan speed of 1050RPM, and also below the $90-$100 Corsair H100iV2 at low RPMs. The lower RPM limits cooling power of these coolers, but means that our noise levels are well below the W120.

Adding a radiator boosted us to H100iV2 performance when at 1500RPM, at 41 degrees over ambient for each. This is still unimpressive, particularly given the overall quality difference between them, favoring Corsair. The 360 radiator and high-end fans we equipped are being outmatched by cheaper coolers and worse fans, which means that we’re having trouble with cooling the coldplate. We’ll be opening up the cooler separately to investigate if there are even any microfins in the coldplate, or if they’re any good. We are bottlenecked at the W120’s coldplate and pipes for sure, though. 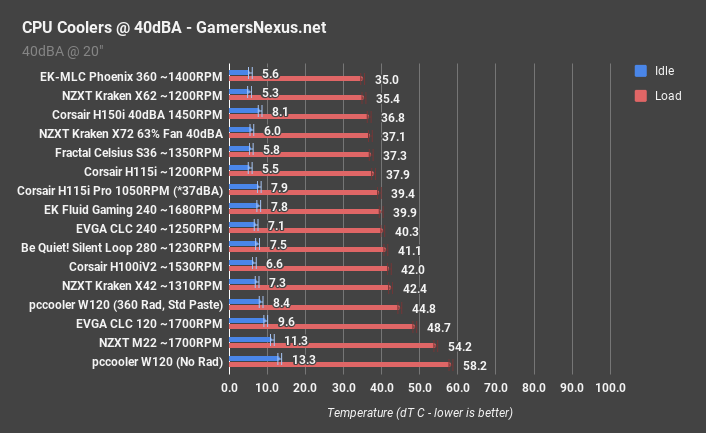 For our next test, we normalize all coolers to 40dBA of output, which ensures that we test on somewhat level footing versus noise output. Most people tune their fan speeds to tolerable noise levels, and so this allows quieter coolers to spin faster and cool better, while louder coolers will be quieted to meet our noise requirement. The result is a test of overall cooling efficiency versus a fixed noise level.

At 40dBA, the pccooler W120 without a radiator operated at the bottom of the chart, at 58.2 degrees Celsius over ambient. This is the worst device we’ve tested yet at 40dBA, and operates even behind 120mm closed-loop liquid coolers, like the EVGA CLC 120 and NZXT M22, which operated at 49 degrees and 54 degrees, respectively. The W120 is significantly worse for noise-normalized testing; although its fan pushes a lot of air, it’s loud and uses cheap bearings and plastic, and also proves turbulent through the finstack. This produces a lot of noise that could be avoided with a better design.

With a 360mm, fat Thermaltake radiator attached, using two Corsair ML fans and one Noctua A12 fan, the pccooler W120 operated at 44.8 degrees over ambient. At this point, the radiator is doing the bulk of the cooling, as our water temperature measurements indicated that the cooler doesn’t dissipate enough heat to keep liquid temperature low. More on this momentarily. With the radiator, the W120 starts costing beyond $200, but it performs about equivalently to a Kraken X42 140mm CLC and other $100 coolers, like the H100iV2 at 40dBA. 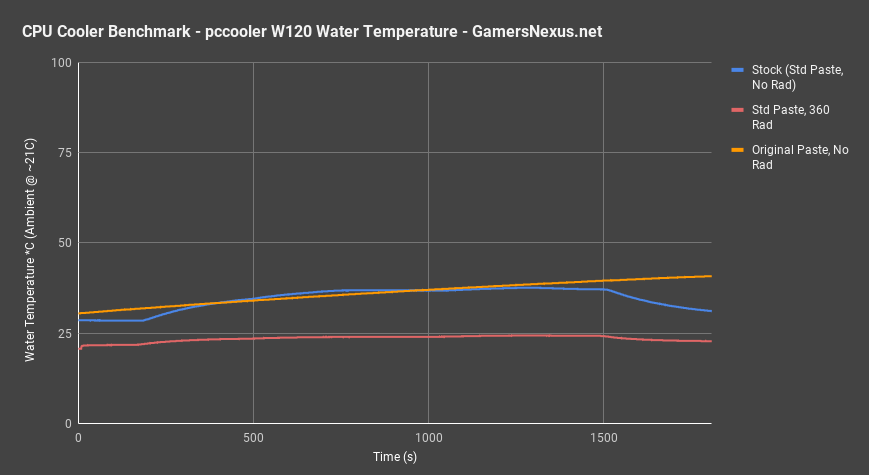 Water temperature measurements were conducted with a K-type thermocouple placed within in the pump and reservoir combo unit from Thermaltake. This measured distilled water as it returned into the inlet from the cooler. Over time, we can see that the blue line, representing the cooler with no radiator but with our standard paste, slowly rises to about 36 degrees. The red line, representing the 360mm radiator test, only rises to 24 degrees. Note that ambient temperature was 21 degrees; we are not showing delta T values here, just straight temperature from the probe. We have adjusted with an offset as appropriate. Finally, the orange line, representing the original paste, illustrates that we have a clear problem with getting heat into the coldplate and getting rid of it effectively, where we rise almost linearly. 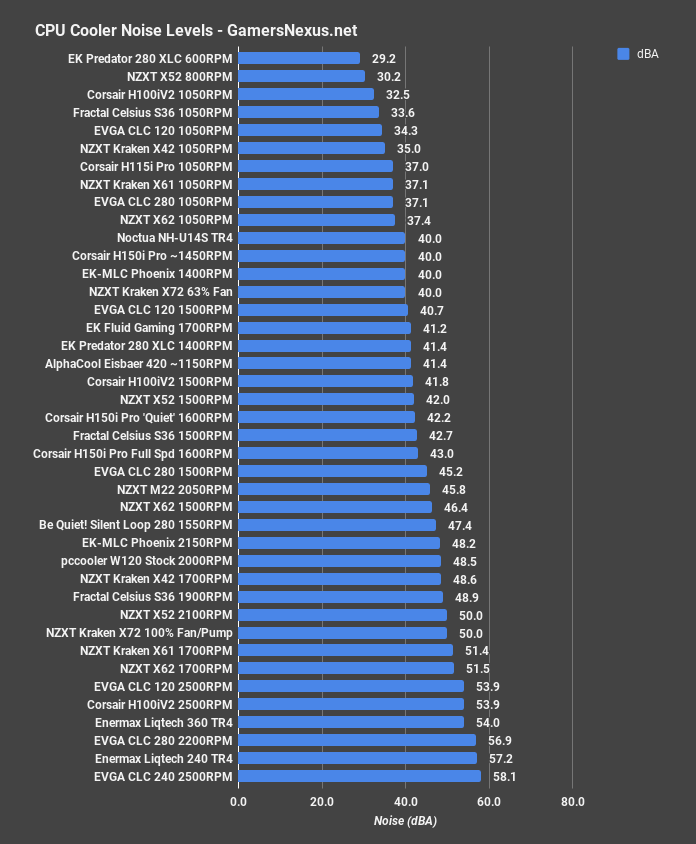 Noise levels at max RPM for the W120 fan place the cooler at 48.5dBA, equal with the X42 at max RPM. The X42 and other nearby coolers in noise are all superior in thermals, making this one a hard sell from any perspective.

This isn’t something we’d recommend buying – plain and simple. It’s still really fun to work with, though, just because it is so weird and different. We’ll be doing a tear-down separately on the YouTube channel (likely in a livestream), so that’s where we’ll be able to better understand why the liquid cooling performance is so inhibited. It’s likely that there aren’t many fins in there, or no microfins at all, and that’s probably where the deltas come in. We’d still like to test this as a straight air cooler, but that’ll come later.