Fractal’s newest case officially released under the name of “Define S2,” but our review has been slightly delayed by the office turning into an overclocking war zone. Fractal has hit a comfortable stride with their cases. The S2 is a successor to the Define S, but to all appearances it’s almost exactly the same as the Define R6, which we reviewed about a year ago. That’s not necessarily a bad thing, though: the R6 is a good case and received praise from us for its high build quality and stout form factor.

The Fractal Define S2 case is the R6, ultimately, just with a lot of parts removed. It’s a stripped-down version of the R6 with some optional reservoir mounts and a new front panel, with rough equivalence in MSRP and ~$10 to ~$50 differences in street price. The R6 and S2 are the most direct competitors for each other, so if choosing specifically between these two, Fractal can’t lose. There are, of course, many good cases in the $150 price range, but the R6 and S2 most immediately contend with one another.

The main differences from the R6 are the HDD mounts and all the other parts associated with the front panel. The rear two-thirds of the cases are identical between the R6 and S2, at least as far as we can tell. Even the front panel itself is almost the same on the outside, but the S2 lacks the hinged door of the R6. That’s because there’s no big front filter like the one on the R6; instead, the vents on the side of the front panel are covered with two much smaller filters. This has interesting implications for airflow, because as we’ve mentioned in the past, placing a filter directly over fans can reduce their efficacy. It’s a cool idea, but it’s also much harder to remove the filters from the S2, since it requires prying the whole front panel off instead of just opening a door. There should rarely be any reason to remove them, though, since they could easily be cleaned from the outside of the case. The width of the front vents on the S2 is also subtly different, marked at just under 2.5cm compared to the R6’s 2cm. Fractal Design has been putting some thought into thermal performance, and we’ll discuss the results of our testing later in this review.

Perhaps unfortunately, removing the front door of the case also removes any possibility of installing a 5.25” drive. The S2 reclaims those extra centimeters for more fan mounting space, furthered with far fewer 3.5” bays in the S2, which is probably the most obvious difference against the R6. The R6 dedicated its entire front-third to a tower of horizontal “universal drive brackets” hidden behind a steel shield, with twelve available slots and six brackets included with the case. The S2 has done away with that completely--or rather it looks like it has, which we’ll touch on in just a moment. Instead of all those drive brackets, there are three 3.5” mounts behind the motherboard tray. That’s still more than many mid-towers, but not quite as impressive. Instead of the tower of drive mounts, the S2 has open air and a removable cover over the now-empty hole in the PSU shroud. That should mean better airflow, but the drive tower was removable in the R6, so the optional PSU shroud cover is the only additional feature in this area. The PSU shroud is riveted and unremovable, like the R6, while the top radiator/fan mount is removable, also like the R6.

The screw holes for the drive brackets are actually still there, but they’re used to attach the forward portion of the motherboard tray instead. This is exactly the same as switching to the “open layout” of the R6 by moving the HDD mounting plate to the other side of the case, except there is no other layout in the S2, so it’s almost a straight downgrade. What we’re trying to articulate is that the chassis is literally the same as the R6, it just has different attachments screwed onto it, and we could unscrew and swap parts to fully convert our S2 into an R6 and vice versa (minus the 5.25” bay). That’s cool from the perspective that Fractal is offering additional variations of a popular case, but it makes it even weirder that this is a distinct product.

Cable management was already very good in the R6 and is slightly better here, since the full-length PSU shroud and motherboard tray hide cables even more effectively. Front panel connections will get a little messier if all three HDD bays are filled, since wires will have to be routed between them rather than through them, but it’s an extremely easy case to work with overall.

One fully new feature are the slots for reservoir mounts on the inside of the case. These allow reservoir clips to be mounted in the spot formerly occupied by the drive brackets.

For discussion of any other features like the side panels or the moduvent, just read our Define R6 review. 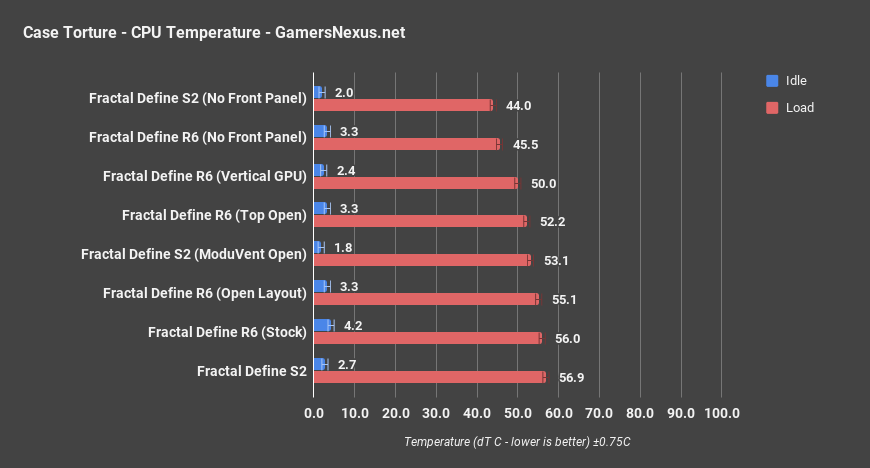 We’re starting with only the two relevant Fractal cases, and then will move on to the comparative charts. Average CPU temperature in torture testing was 56.9 degrees Celsius over ambient when stock, which improved a few degrees to 53.1 degrees delta T over ambient with the steel plate removed from the top of the case. With everything stock but the front panel completely removed, CPU dT was vastly lower and averaged 44 degrees. Adjusting the vent size and the placement of the front filter was movement in the right direction, but the front panel is clearly still a huge obstacle to the fan’s performance. Of course, this impacts noise, but we’ll talk about that a bit later.

The stock R6 scored within margin of error of being exactly the same as the S2, but 1.8 degrees better in the “open” layout, presumably due to the large gap in the PSU shroud which we left covered in the S2. We feel comfortable saying that stock CPU temperature is the same in the two cases, despite changes to the front panel. The S2 actually beat the R6’s CPU result by 1.5 degrees Celsius with no front panel at all, since the fans are placed slightly higher in the S2 because of the absence of a 5.25” bay. That said, 1.5 degrees is about error margin. 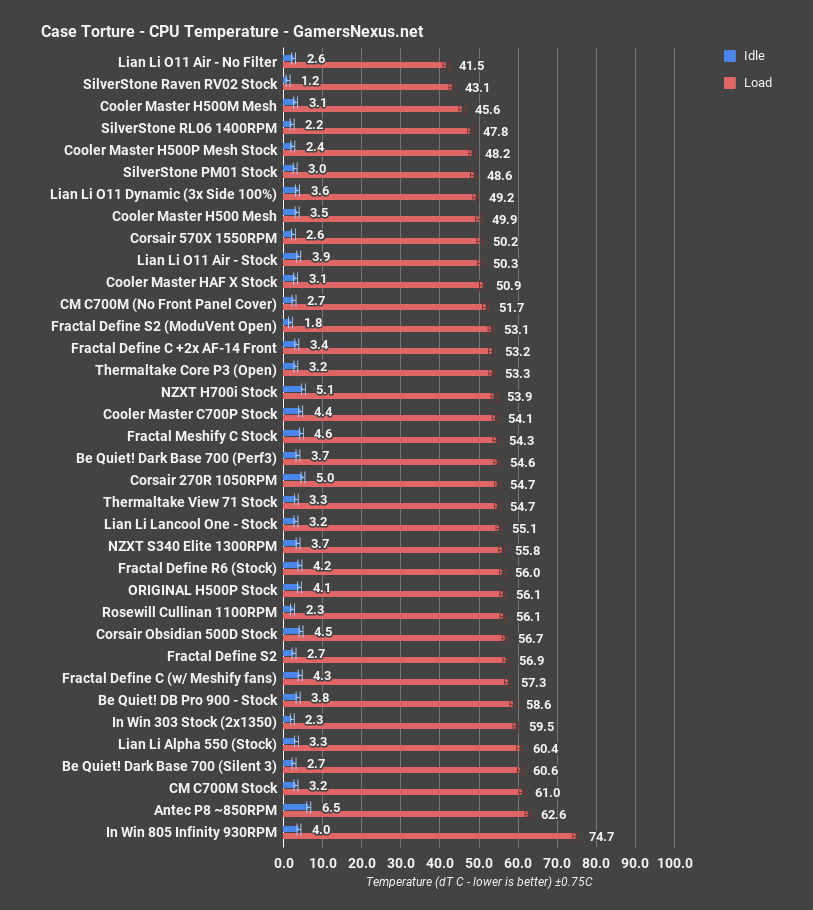 Compared to some other cases, similarly priced options in the $150 class would include the H700 non-i -- but same idea -- and the H500P Mesh, alongside the Lian Li O11 Air. With the Moduvent cover removed, the S2 lands right around where the Define C with extra fans performed, or the NZXT H700 would perform. The H500P Mesh is measurably ahead, but also an extremely different case with a much different look and goal.

GPU torture temperature was 59 degrees stock, not significantly lower with the top vent open, and it measured 55.1 degrees C dT with the front panel completely removed. In this test, at least it seems like the front panel isn’t the biggest obstacle to cooling, and instead the arrangement of intake fans has more to do with how much air is delivered.

The stock layout of the S2 is again slightly warmer than the comparable open layout of the R6, which can be put down to the gap in the shroud, so the two can be considered equivalent. The R6 maintained its advantage this time in the test without any front panel, which makes sense again because of the slightly lower fan placement. Vertical GPU placement is not recommended unless using an open loop card, as illustrated by the R6 here. 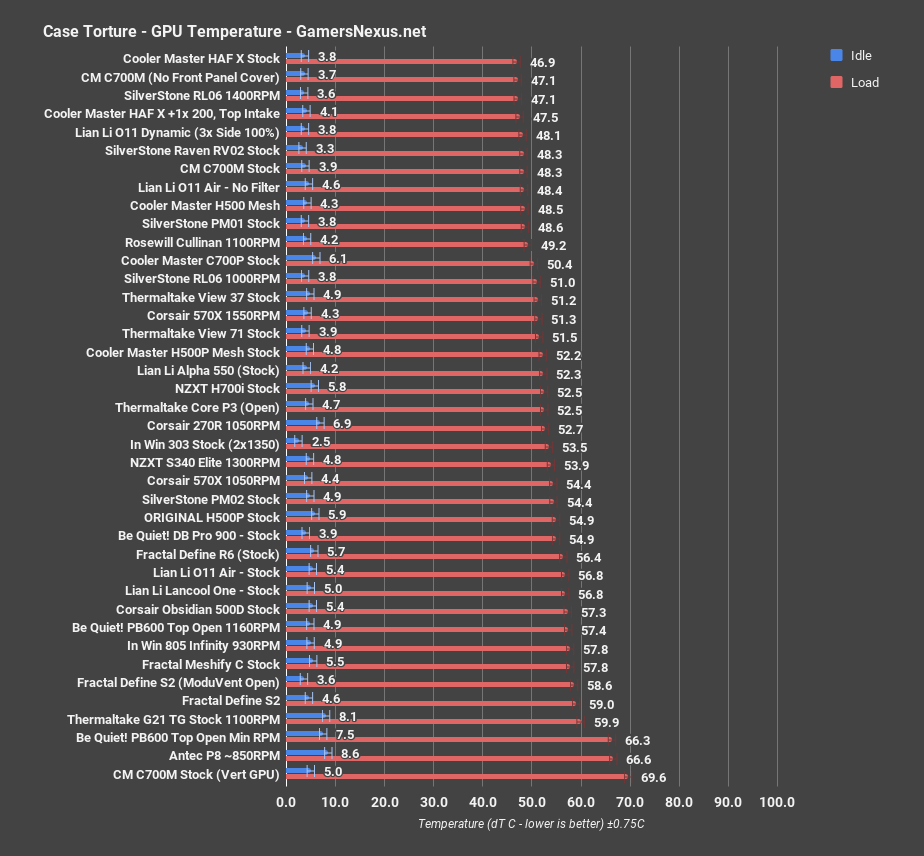 Comparatively, the S2 lands toward the lower-third of the pack, around where the R6 originally performed. The case is more silence-driven than performance-driven, so we won’t criticize its thermal performance too heavily -- we need the context of its acoustic performance, coming up momentarily. As measured here, it is overall below average in cooling capabilities. 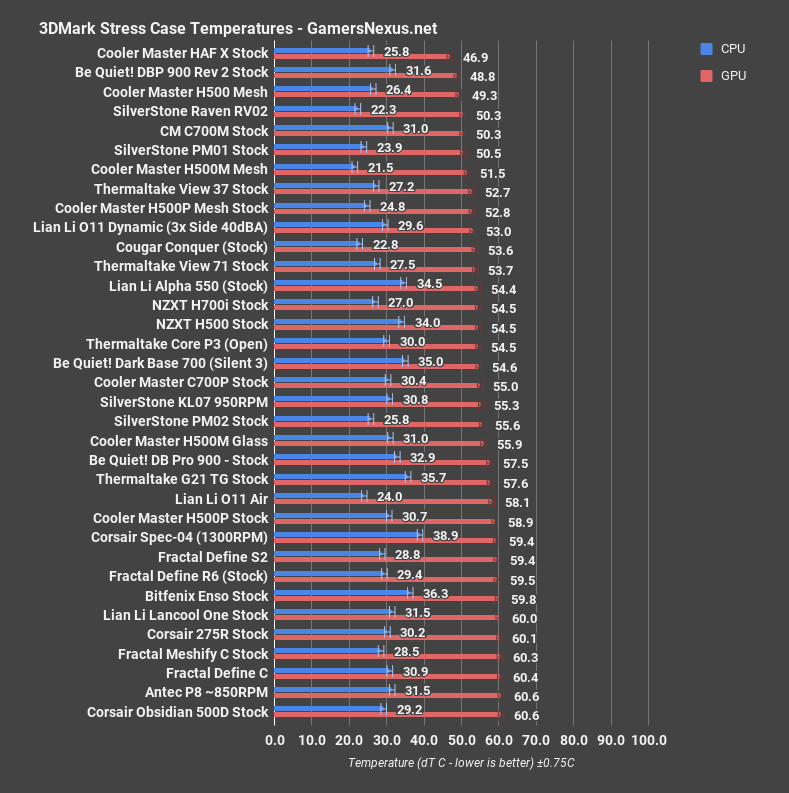 Firestrike Extreme is next. This is a realistic workload that emulates gameplay, allowing insight into performance under real gaming conditions. GPU temperature during our Firestrike Extreme stress testing was 59.4 degrees, almost exactly the same as during the power virus torture test. It’s also just 0.1C different from the stock R6, which is well within our margin of error. The two cases are functionally identical in performance for this benchmark, including in CPU thermals. Again, the S2 ends up toward the bottom-end of the results chart. 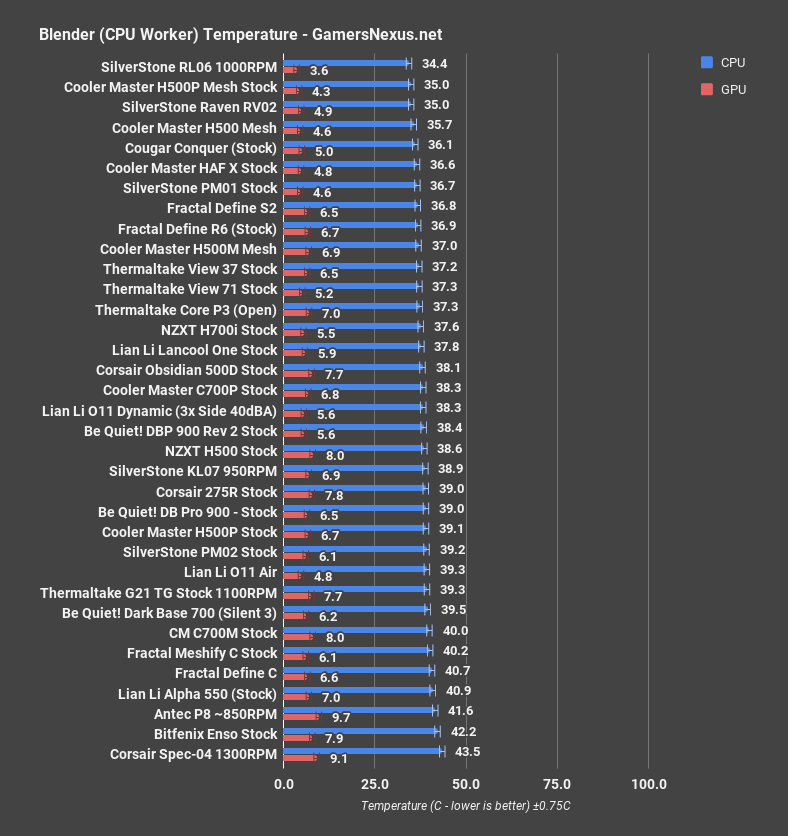 Blender CPU rendering is next, providing another realistic workload. Rendering our monkey head test image on the CPU raised temperature to 36.8 degrees Celsius over ambient, also just 0.1C different from the stock R6. That’s within margin of error, and so they are functionally the same. Thermals are toward the top-third in this chart. 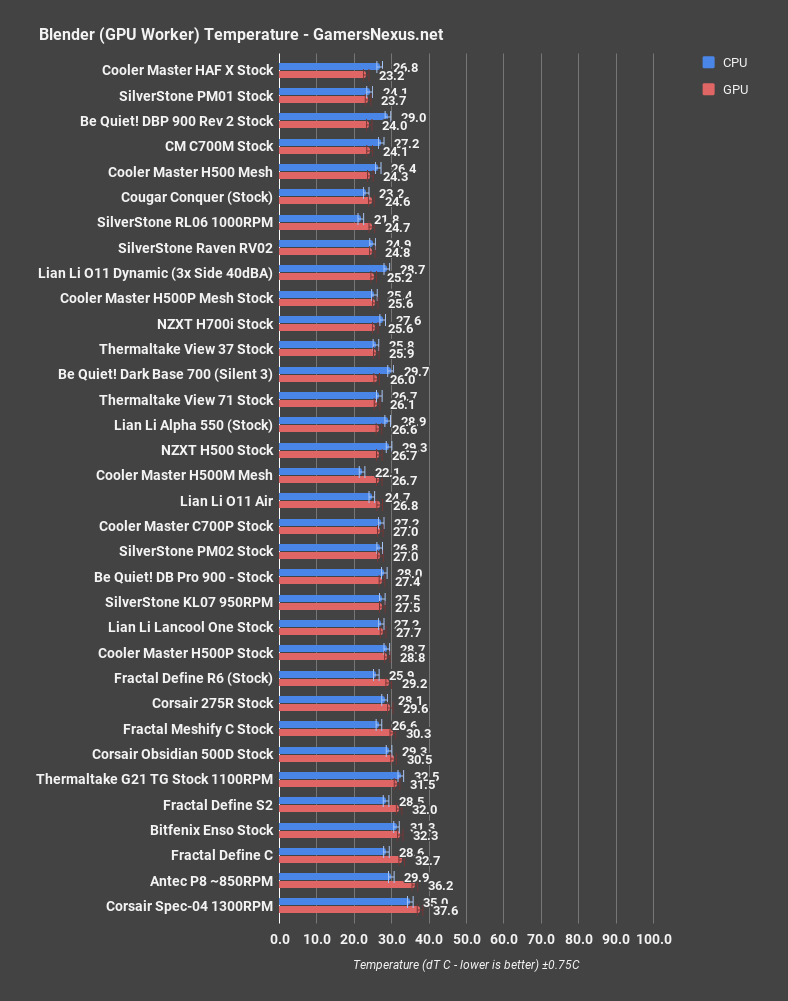 Rendering on the GPU raised GPU delta T over ambient to 32 degrees, widening the gap with the R6, which averaged nearly three degrees cooler in this test. Both of these tests were done in stock configuration, which means a big gap in the PSU shroud for the R6 but not the S2. 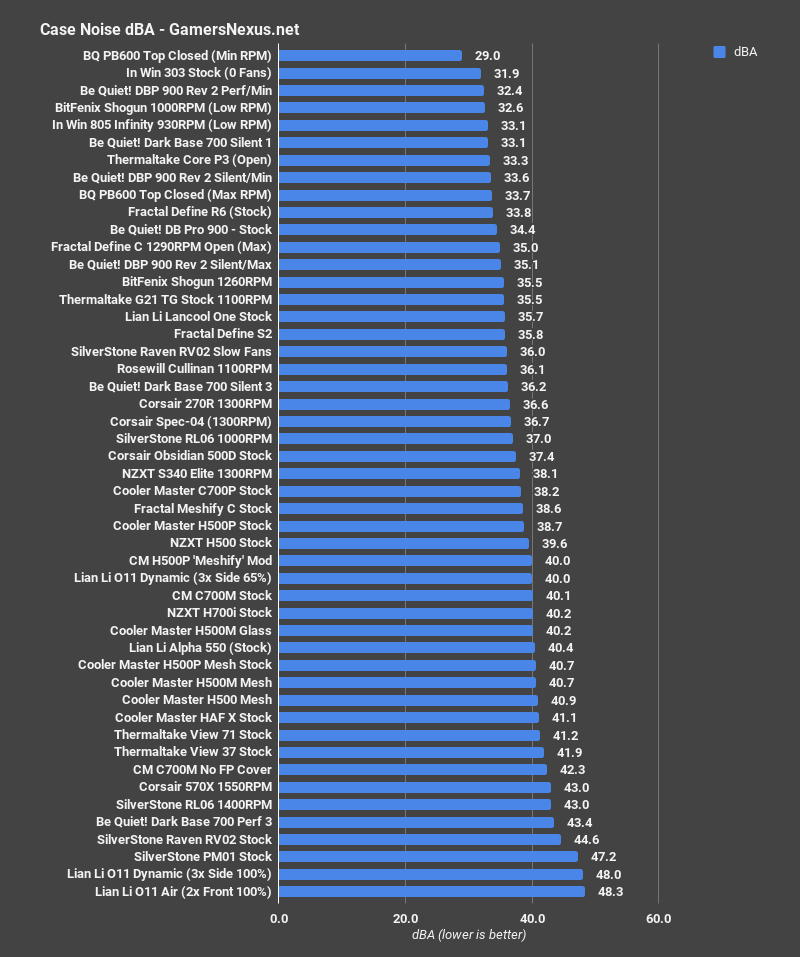 We measured the Define S2 at 35.8 dBA and the R6 at 33.8 dBA. That difference is not within audible range for most people, if at all, and even 35.8 dBA is good for a case with three stock fans in it. There’s nothing about the S2 that should make it any noisier or quieter than the R6, other than maybe some slight variation due to the front filter placement.

We don’t dislike the S2, but there doesn’t seem to be a compelling argument to buy the it over the R6. There are sixteen SKUs of the R6 listed on Fractal’s site, it has more flexibility in terms of the number and type of drives that are installed, and it costs about the same as the S2. The advancements that Fractal has made are focused on cooling, especially liquid cooling, but it’s still not the ideal case in that department. We’re not demanding more airflow, especially not in a case that isn’t necessarily heavily marketed to that market, but we would like to see any reason to buy the S2 over an R6. You get less with the S2, it’s the same price (or more), and its changes seem overall a downgrade versus the R6. For air under Fractal’s name, there’s always the Meshify C.

The strengths of both the R6 and the S2 are that they’re well-built, visually tidy, and not overly expensive cases that are good candidates for housing a normal gaming PC. Again, we don’t dislike this case, we just think it’s the same thing as a case we already like. The parts that make them different are removable and interchangeable, and Fractal could sell the S2 as a conversion kit for the R6 if they wanted to. At any given time, the answer to “which is better” is “whichever one is cheaper.”