Intel’s “STIM,” or soldered thermal interface material, has been the company’s biggest bragging point for the i9-9900K launch. We delidded the i9-9900K, cleaned all of the solder off of the CPU, and then re-lidded it with Thermal Grizzly Hydronaut thermal paste. Basically, we went backwards – we did the opposite of what’s normally done in a delid. Cue the clip of talking with Gordon from PC World about not being able to complain.

Let’s investigate whether it’s worth doing for the 9900K’s solder.

We did a few things for this testing: First, we collected all stock performance numbers and gaming numbers without delidding it, so let’s just make that clear right away. This was done after all other testing. Secondly, we originally had a clever idea to disable two cores on the 9900K and fix the voltage and frequency to equivalent values as you’d find on the 8086K. After delidding the 9900K and after speaking with Der8auer, we learned that the 9900K isn’t perfectly comparable to the 8086K – not even if disabling two cores. The 9900K actually has a thicker die package atop the substrate, which impacts results in ways we can’t account for with our clever trick. The die is also larger, which means it dissipates heat over a wider area and will run cooler. For this reason, our 8086K results we ran are actually not as comparable as we wanted – instead, we will compare the 9900K with solder to the 9900K with Hydronaut. If you’d like to see results with liquid metal, we’d strongly encourage you to go visit Der8auer’s channel and watch his content. He did additional testing with delidding and collaborated with us on our results. We have completed our own liquid metal testing, but will be publishing it post-review with some extra data. 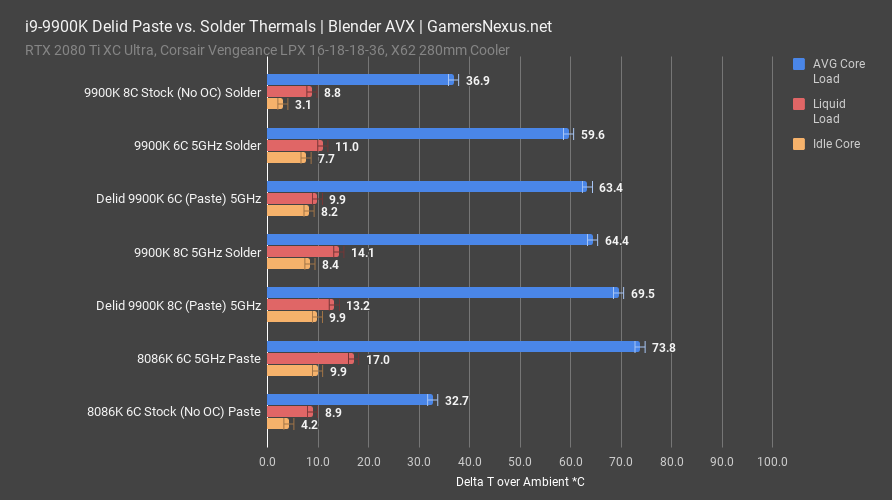 Getting into our results, let’s focus on just the 9900K numbers. The 9900K with solder, clocked to 5GHz and with all cores enabled, and set to a 1.341V after Vdroop is counted. This result operated an average core temperature of 64.4 degrees Celsius over ambient, with ambient logged every second. We also logged current into the EPS12V rails every second, which is important for data accuracy. At 64 degrees core and 14 degrees over ambient liquid, the most direct comparison is the 9900K delidded, running 8 cores, and also at 5GHz. This one operates at 69.5 degrees over ambient, for a rough 5-degree increase over the solder. That’s 5C by switching from solder to Hydronaut. The thing Intel bragged about so much, its solder, is not much better than a high-end thermal paste. It is worse than delidding and liquid metal, but we’ll encourage you to watch Der8auer for that data.

Keeping just the 9900K SKUs in focus, we can next look at the 6C test we ran: It’s the same thing here, with about 63 degrees over ambient for the delid, or about 59.6 for the stock solder version. The 8086K tests are still here, but as we learned from Roman and our own investigation, it’s clear that this data is incomparable enough to not bother mentioning. We still wanted to leave it here for reference, though. 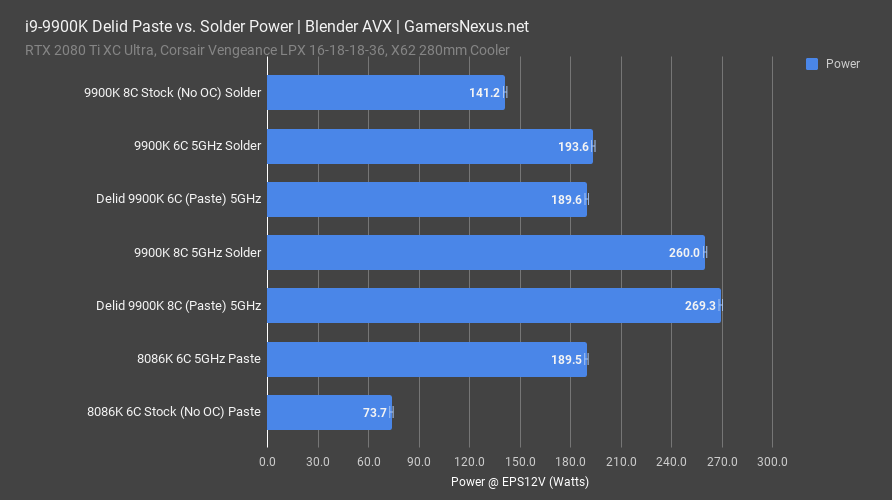 As for power and voltage during these tests, here’s what we were looking at: Power consumption for the 9900K 6C 5GHz test was 194W, close enough to the 189.6W power consumption of the 9900K 6C delid test to be comparable. The 8C variation of the 9900K measured 260W, put up against 269W in our delidded test. This is within reasonable control, although the delidded variant might be marginally cooler if we could have dropped another 9W. Voltage was also logged and measured 1.341V for all 8C tests and 1.35V for all 6C tests. There was vdroop as a result of ASUS’ BIOS.

Solder is a reversion back to the Sandy Bridge era, and one that has been needed to get an extra couple hundred MHz out of the existing process. This is still an improvement over thermal paste, but it’s not perfect. The reason it isn’t perfect is largely because of how thick the solder layer is, whereas liquid metal can run a much thinner interface to the IHS.

Click "Next" below to continue to Page 3: Streaming & Multitasking CPU Benchmarks