Far Cry 5 is next. This one runs on the Dunia Engine by Ubisoft.

At 1080p, the 9900K pushes 157FPS AVG, 119FPS 1% lows and well-timed 102FPS 0.1% lows. Overclocked, the 9900K ends up at 163FPS AVG, for a reasonable gain of 4.5% over the stock 9900K. The 8700K ends up around 155FPS when overclocked to 5GHz, meeting the stock 9900K at near equivalence. The stock 8700K sits closer to 141FPS AVG. When looking at the i5 CPUs, we noticed a clear drop in frametime consistency as the frame-to-frame interval became more sporadic, represented by the i5-8600K’s 0.1% low metric. The R7 2700 at 4.2GHz, meanwhile, ended up 111FPS AVG, within margin of error of the overclocked R5 2600 at the same frequency target. These are within variance of each other, and can be considered roughly equal. The 9900K has a clear lead in Far Cry 5, and performance follows a similar trend as in Assassin’s Creed. Both are Ubisoft games, but they are different engines – although those engines may share code. 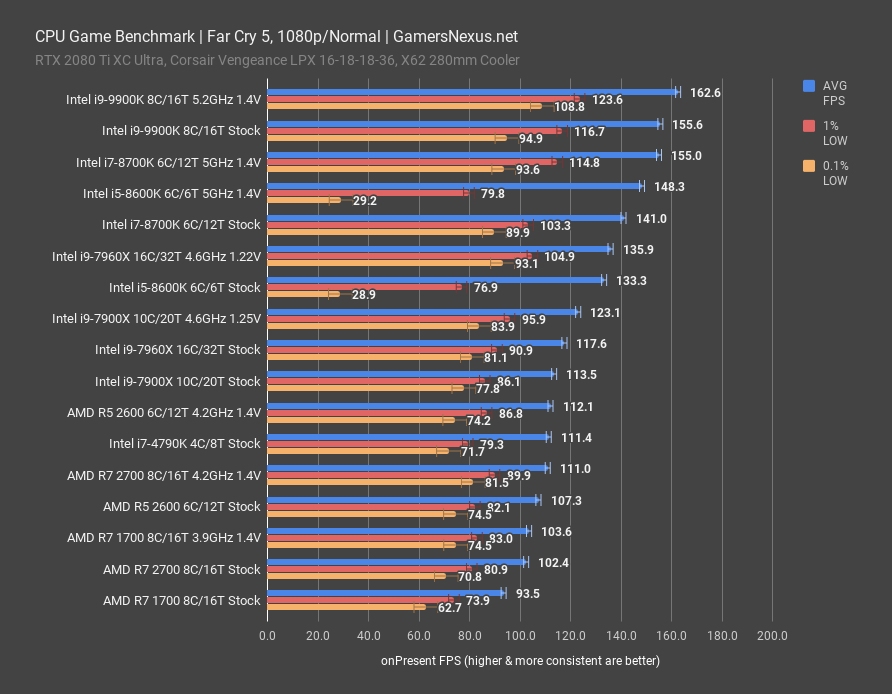 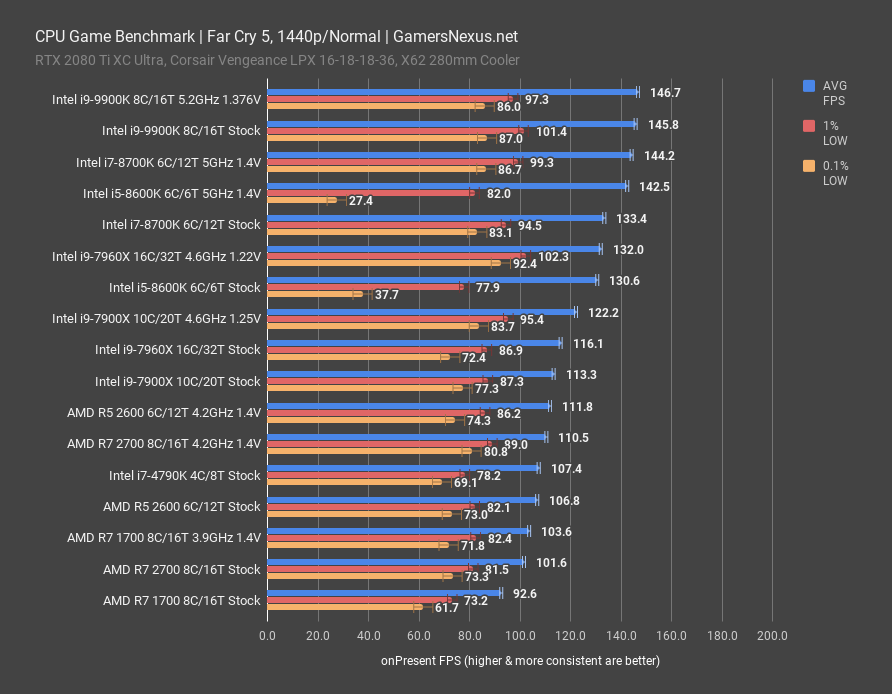 At 1440p, performance becomes capped at around 147FPS AVG as the GPU is leaned on more heavily. The 9900K maintains 146FPS AVG, the 8700K at 5GHz again meets its performance, and the 8600K does the same – except its thread deficit does pose problems for frame-to-frame interval consistency. The 2700 at 4.2GHz posts roughly the same performance as before, as we’d expect, because it is almost fully CPU-constrained. The OC 2700 and 2700X are not fast enough to keep up with 1440p throughput under normal settings with the 2080 Ti. If we were to boost settings to high options and fully leverage the GPU, then the natural expectation is that all results will be dragged down to meet the GPU cap. 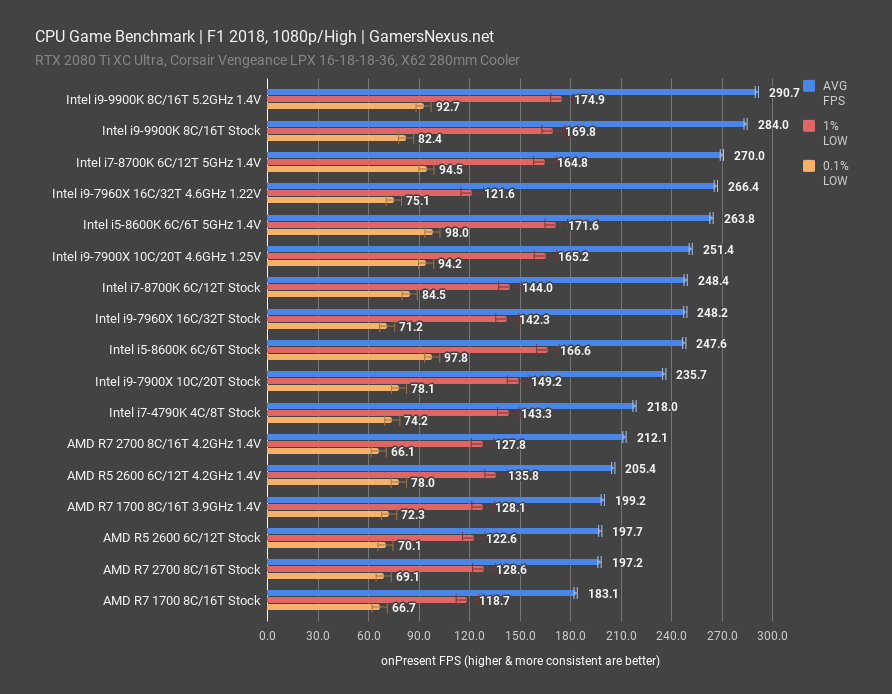 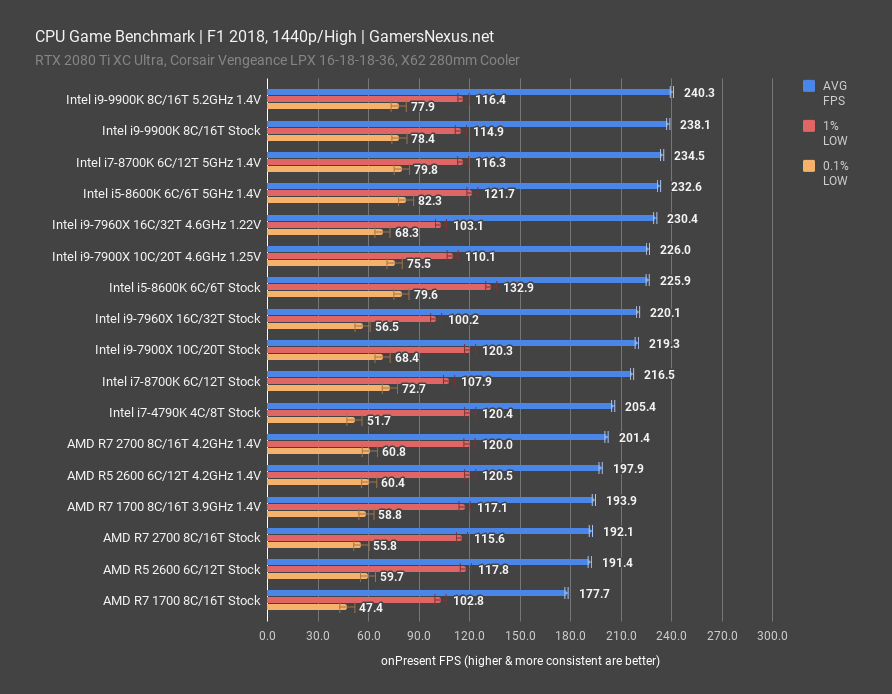 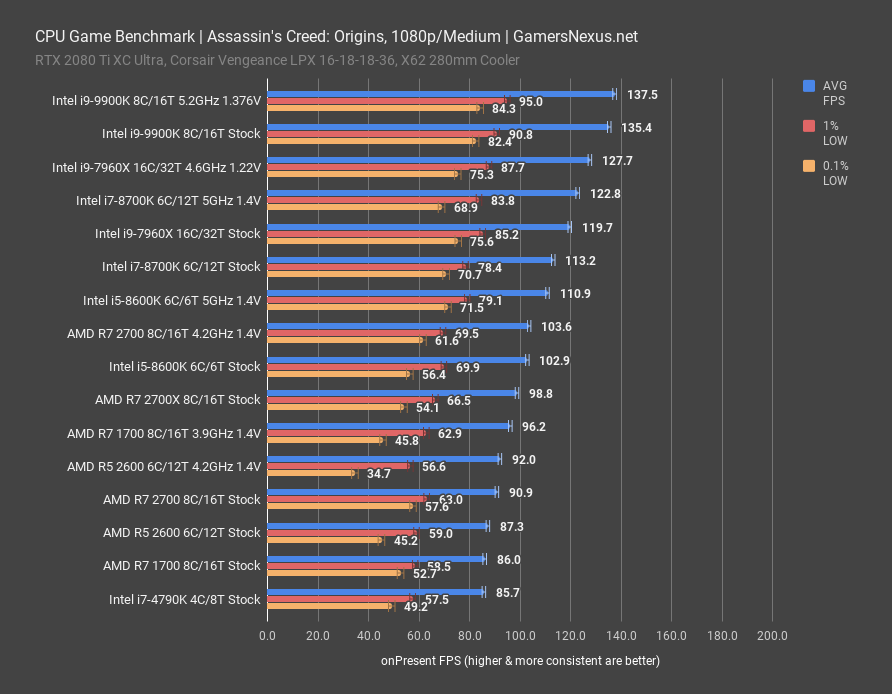 At 1080p and medium settings, we are minimally GPU-constrained in an otherwise GPU-intensive game. The i9-9900K leads the pack at 135FPS AVG when stock, and also illustrates that we are hitting GPU bottlenecks at this point. The overclock only gains us 2FPS, or 1.5%, and so we can’t see the unconstrained performance with this game. Still, we balance between realism and proper methodology. Going lower than medium is unrealistic, and so we will point toward our other unconstrained tests for examples of top-end performance. Still, the 9900K leads the 8700K stock CPU’s 112FPS AVG by 21% when both are stock. Overclocking the 8700K pushes it up to 123FPS AVG, closing the gap, but only because we are limited by the GPU on the 9900K. This is a realistic example of how even a 2080 Ti can become bound by a 9900K.

The 2700X was only tested in ACO and Ashes to illustrate that it is functionally the same as an overclocked 2700, just as a reminder. In this game, we see the 2700X land between an overclocked 2700 at 4.2GHz and a stock 2700, expectedly. The overclocked 2700posts 104FPS AVG results. This puts it ahead of the stock 8600K and led by the 9900K stock CPU by about 31%. This is also why we recommend buying the non-X CPUs in most instances. The 9900K holds a clear lead here, but that’s not unexpected, at this point. 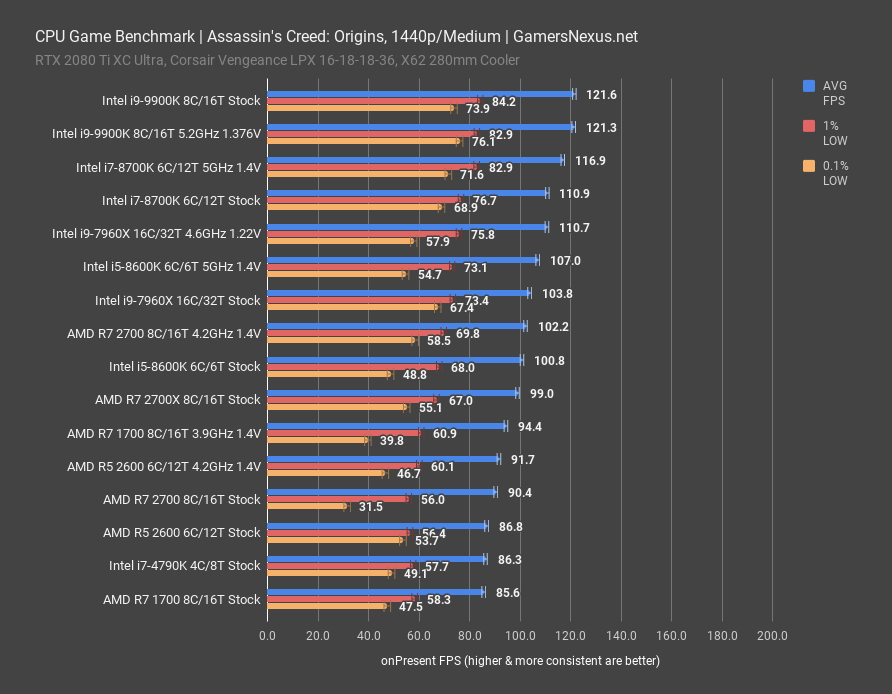 At 1440p, Assassin’s Creed: Origins illustrates a clear GPU limit at 122FPS AVG, where the 9900K sits under both configurations. The stock and overclocked results are tied, with the difference being within margin of error. The 8700K isn’t far behind, at 117FPS AVG, and the 2700 at 4.2GHz posts a 102FPS AVG result. Differences absolutely still exist at 1440p, but they do diminish. 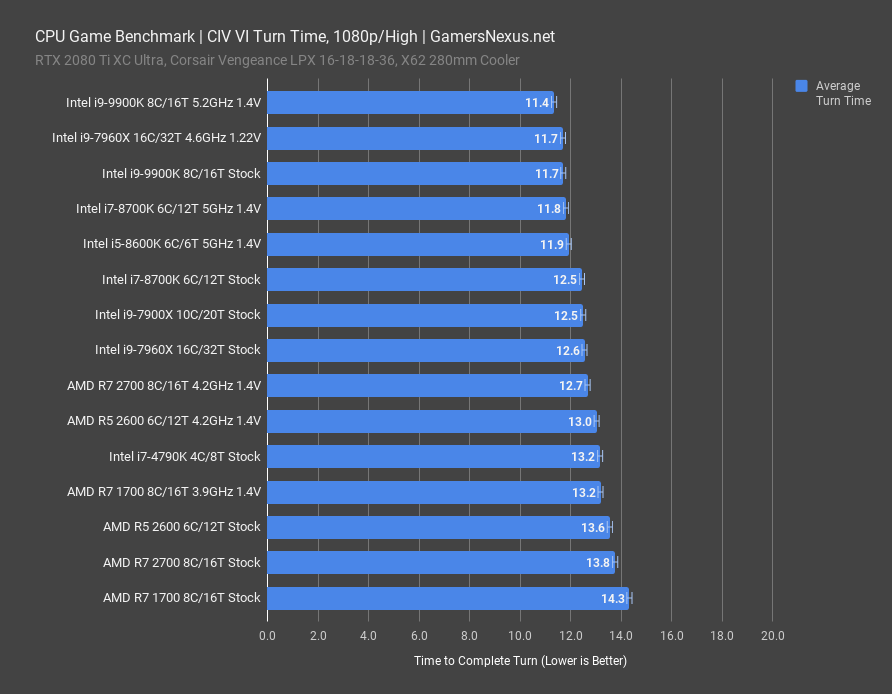 For CIV VI, we use the AI benchmark to analyze turn time processing. This is represented in a unit of time, not frames per second, and so we’re looking at number of seconds to process a single turn. This is taken from an average of five turns processed. If it takes a CPU 10 seconds to process 1 turn, and you have 6 AI in the game, that would be about 1 minute per full rotation before it is the player’s turn again. A faster CPU reduces this wait time. Resolution is also irrelevant here – the results would be the same at 1440p.

GTA V runs on the RAGE engine from Rockstar and is our oldest tested title, but popular enough to remain on the bench for now. 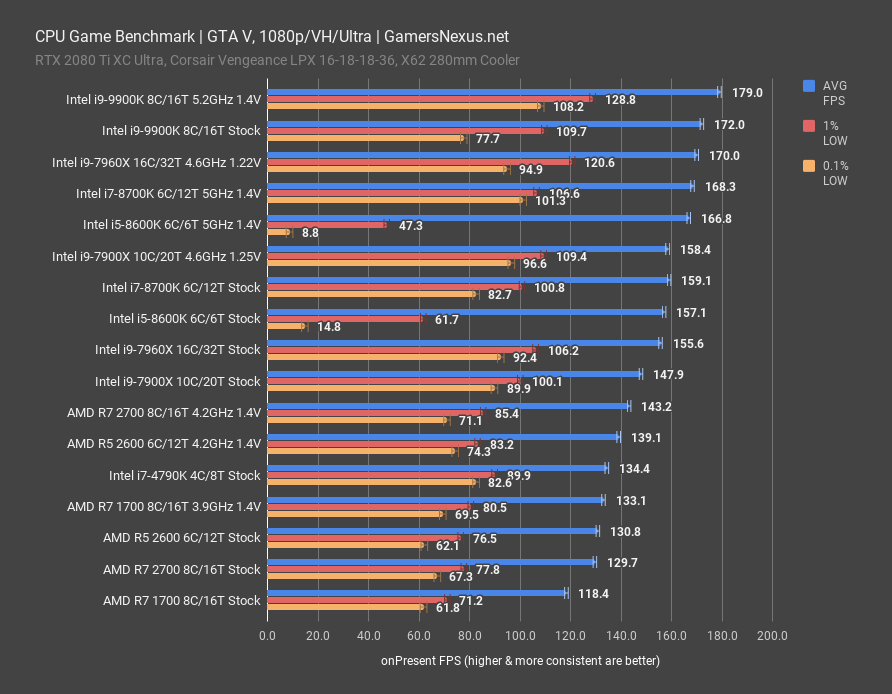 At 1080p and with High and Very High settings, the 9900K operated around 172FPS AVG, boosted by the 5.2GHz overclock to 179FPS AVG. Note that we are running into engine limitations here, best illustrated by the dismal i5 results for the 8600K. This is a story we busted open about a year ago, but it’s worth reiterating: When i5 CPUs bounce off of the 187FPS marker, they instantly stutter hard. To resolve this, you’d actually want to run a lower average framerate in GTA so that it avoids the frame limiter at the high-end. This issue seems to primarily affect i5 CPUs, as we discovered previously. It’s clear that Rockstar also hasn’t fixed it since the discovery.

Either way, the primary focus is elsewhere. The 8700K stock CPU posted a 159FPS AVG, with the overclocked result at 168FPS AVG. That’s a marked gain which puts it near the 9900K stock CPU. Like most games, GTA does like frequency first-and-foremost. 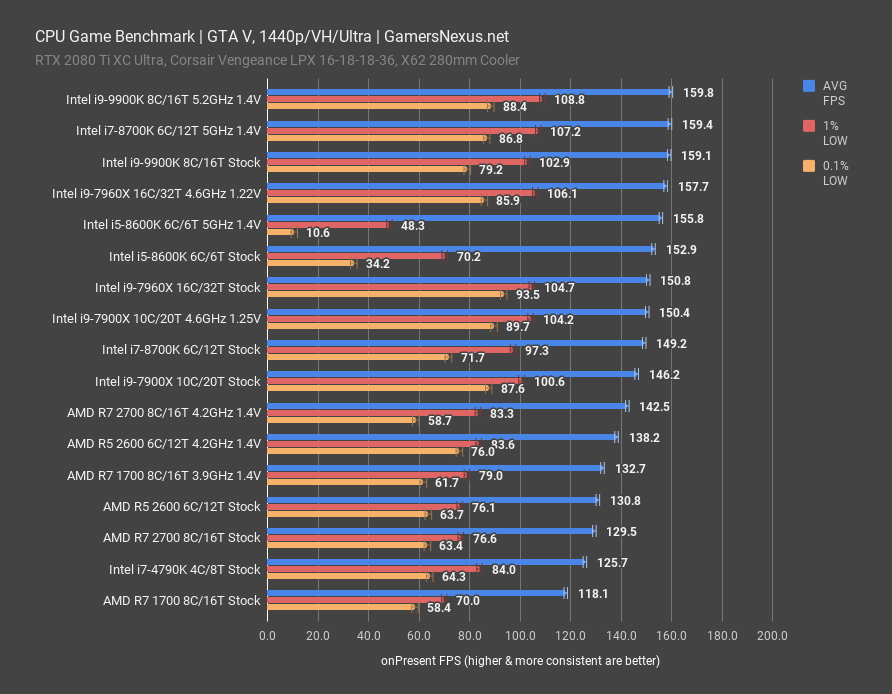 Blender performance is up next. As a reminder, we completely overhauled our test methodology, test bench, and updated Windows for this review. This means that we no longer have dozens of CPUs for comparative data and must rebuild slowly. 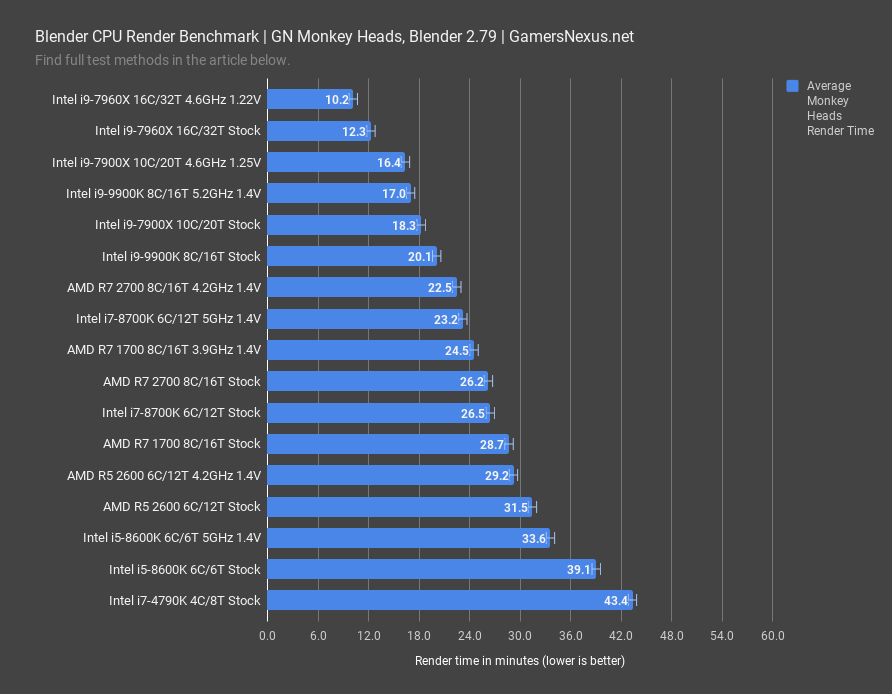 For our in-house GN monkey head render that’s built specifically for CPU stressing, the 9900K finishes the image in 20 minutes, marking it as 9% slower than the stock i9-7900X X299 CPU. Given that the 7900X was nearing $1000 at launch, this is a good target to hit. Overclocking the 9900K to 5.2GHz pushes us to a 17-minute completion time, roughly tying with a moderately overclocked 7900X. The 7960X is the fastest we’ve retested so far, and for perspective, the additional threads allow it a noteworthy time reduction of 38% when overclocked to 4.6GHz versus the 7900X overclocked to 4.6GHz. If thread-intensive 3D rendering is your thing, there is still great value in the higher-end CPUs. This primarily is true when you need more memory than is available on GPUs, as CUDA rendering is still more cost-effective for most use cases. Running out of memory is more of a problem on GPUs, though.

Our next render test is a single frame from the GN intro animation, which we’ll play back now. This animation is a high-sample image with ray tracing and stresses different parts of the devices. For this one, the 9900K stock CPU finishes in 22.5 minutes, compared to the stock 7900X and overclocked 9900K at 20.8 minutes. The overclocked 7900X still manages a time reduction of 13% from its thread advantage. The overclocked 2700 at 4.2GHz completes the render in 26.6 minutes, allowing the 9900K overclocked CPU a time reduction of 22% to 20.8 minutes. Whether that’s worth the extra money is dependent upon how time-intensive your workloads are.

As always, for those who jump to the conclusion, we’re going to recommend that you read the parts of the article applicable to you. That’s where all our effort goes, ideally leading you to your own conclusion.

The short version is this: Intel gets credit for using solder on the 9900K, despite it not really being the best due to thickness of the solder and silicone adhesive. Intel also gets credit for being the “best” CPU on the gaming charts – but the word “best” is tricky, here. The 9900K is not the best value, nor is it the best price, but it does have the highest throughput in a technical sense. The question is whether or not the player can notice those extra frames; for a lot of people, we know the answer is “yes,” especially the hyper-competitive among you. For many others, of course, the difference between 212FPS and 270FPS may be entirely irrelevant, or playing at 4K might largely nullify the advantages. Further, FPS scales non-linearly – a 27% gain at 60FPS (from 48FPS) produces a tangible difference in gaming, while a 27% gain at 212FPS to 270FPS won’t be nearly as visible. It is likely imperceptible to many.

Regardless, Intel gets credit for being fast with games, beating the 2700X at its own rendering games in Blender, and finally being soldered. AMD gets credit for being better value, forcing Intel’s hand (the solder is out of necessity, mind you, to get an extra couple hundred MHz), and for maintaining the “best” option in the R5/i5 class. The 9900K isn’t really a direct comparison with the 2700 ($250) or 2700X, anyway. The price disparity is huge. The 2700 can be had for significantly cheaper, then overclocked for still-good gaming performance, while leaving more budget for better GPUs or RAM.

The performance gap looks a lot worse for AMD when summed-up as a percentage, but in reality, as illustrated above, that percentage is potentially misleading. Statistics can be funny in that way. We’re talking differences of 3.7ms frametimes vs. 4.7ms frametimes, in some of these games, and the level to which most people can detect that delta is questionable. One could argue that the faster CPU will “age better,” but that’s a tough argument – the usable life of the system may expire before that argument matters.

We appreciate the 9900K’s gaming performance, we just suggest that buyers carefully consider budget. If there are budgetary constraints, consider reallocating some of the CPU fund toward higher-end video cards or RAM. If there is no constraint, well, Intel’s is the chart-topper.