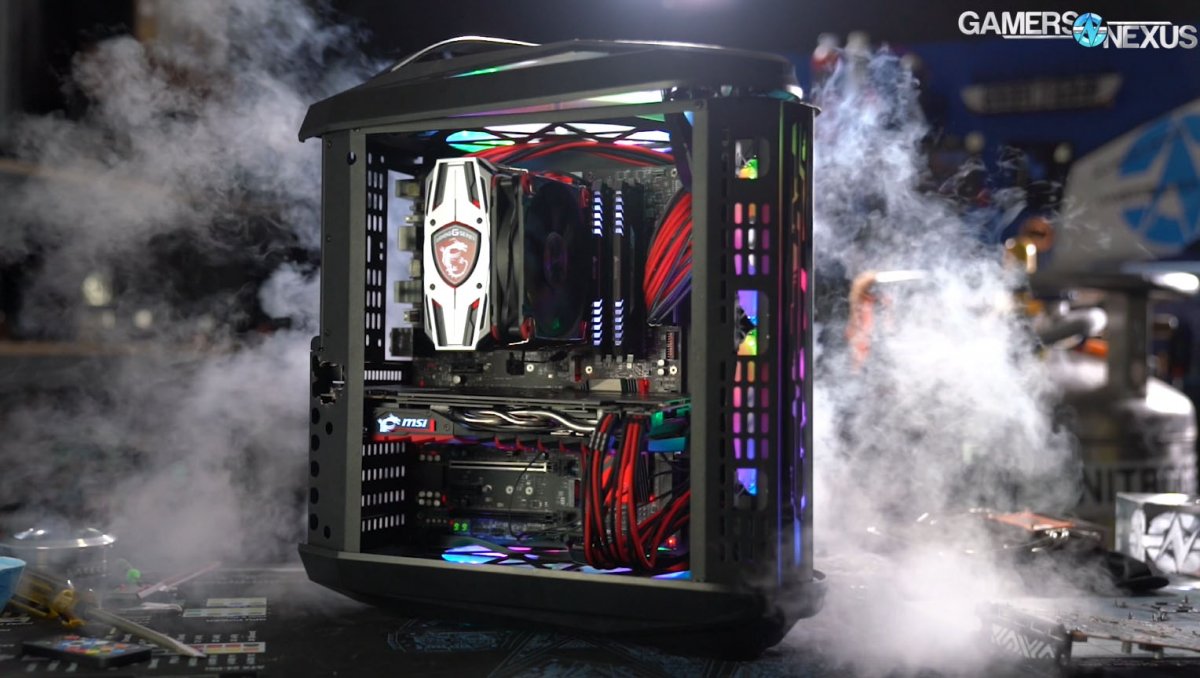 The fans and the shape of the case were primarily why we went to the trouble of buying and bringing the case back. Cooling is provided by four fans: two giant 200mm ones at the top and bottom (both intake), and two 120mm “intake” fans, if you can call it intake, at the front corner. Exhaust is directed passively out of the back of the case, hopefully helped along by the fans at the front. Whether the front fans should be called intake fans is debatable, because there are no intake vents whatsoever at the front of the case. None. There are vent holes cut into the metal chassis, but the plastic side panels completely cover them. Our best theory is that the fans are supposed to pull air in around their edges from further back in the case, where cool air is supplied by the 200mm fans. We don’t need to wait until the thermal section to tell you that that’s bad design. Our initial excitement over the case cooling was tempered with a closer look, but we had some ideas to improve it that we’ll explore in a moment. 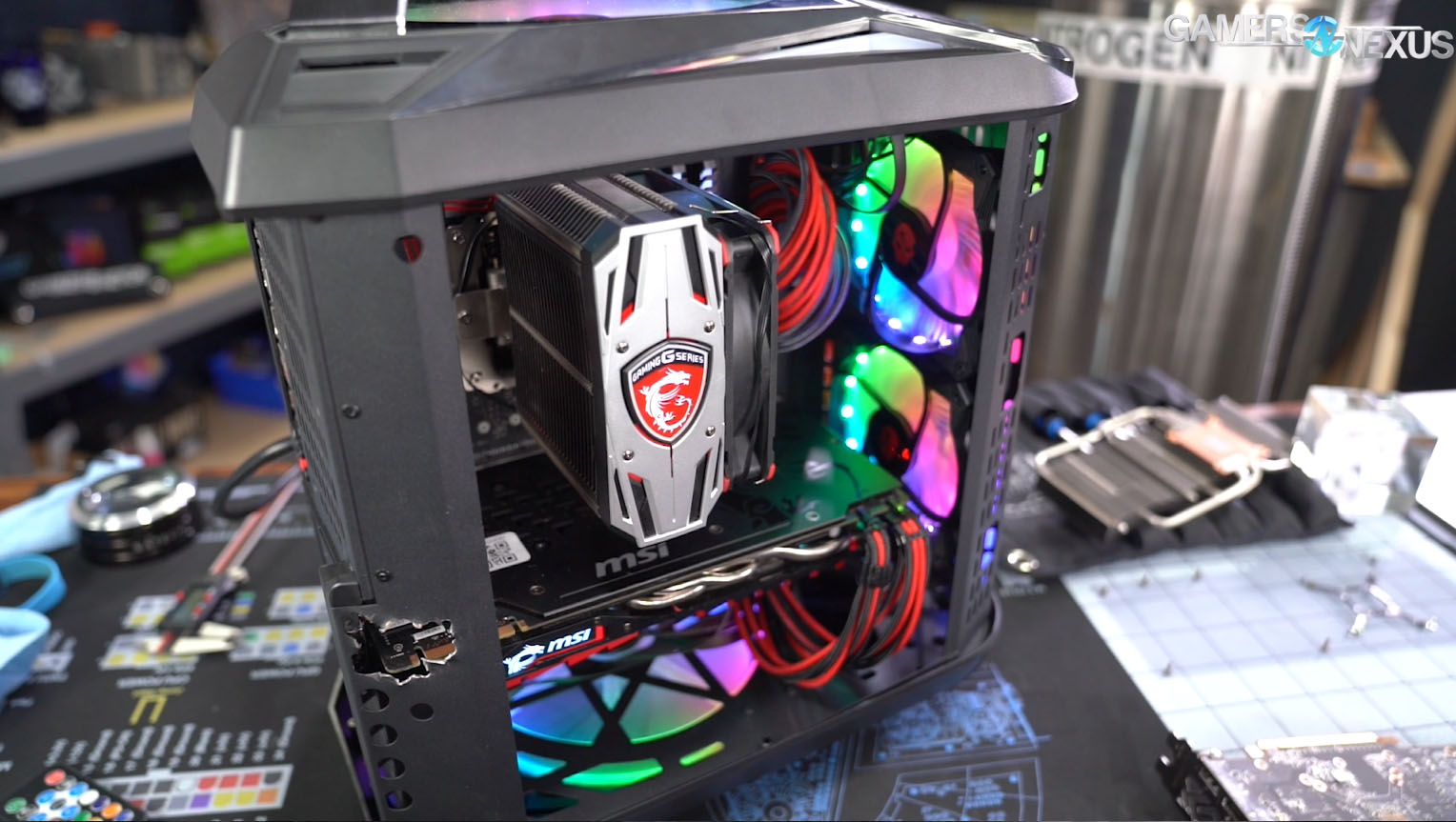 Unlike the fans, the shape of the case worked better than expected. It’s a given that any PC case that deviates from a rectangular form will pay for it somehow, with weird cable management or lack of clearance for certain parts or bad airflow. Despite looking like a novelty case from the outside, though, the Threebody fits components in a surprisingly logical and natural way. The side panels didn’t offer quite enough clearance for our air cooler or graphics card, but we’ve run into that problem before in normal cases. Both managed to fit well enough for testing with some creative hacking at the chassis. The roughly triangular footprint is formed by a large rectangle that holds the motherboard and GPU with a smaller triangle tacked on to one side for storage drives, the PSU, and cables. Space at the front corner is used for fans. The only thing that there really isn’t any room for is cables: there’s a space provided for bundling them next to the HDD storage, but they have to be strapped down thoroughly to keep anything from brushing the bottom of the case and getting stuck in the fan there. A single built-in velcro strap is provided. 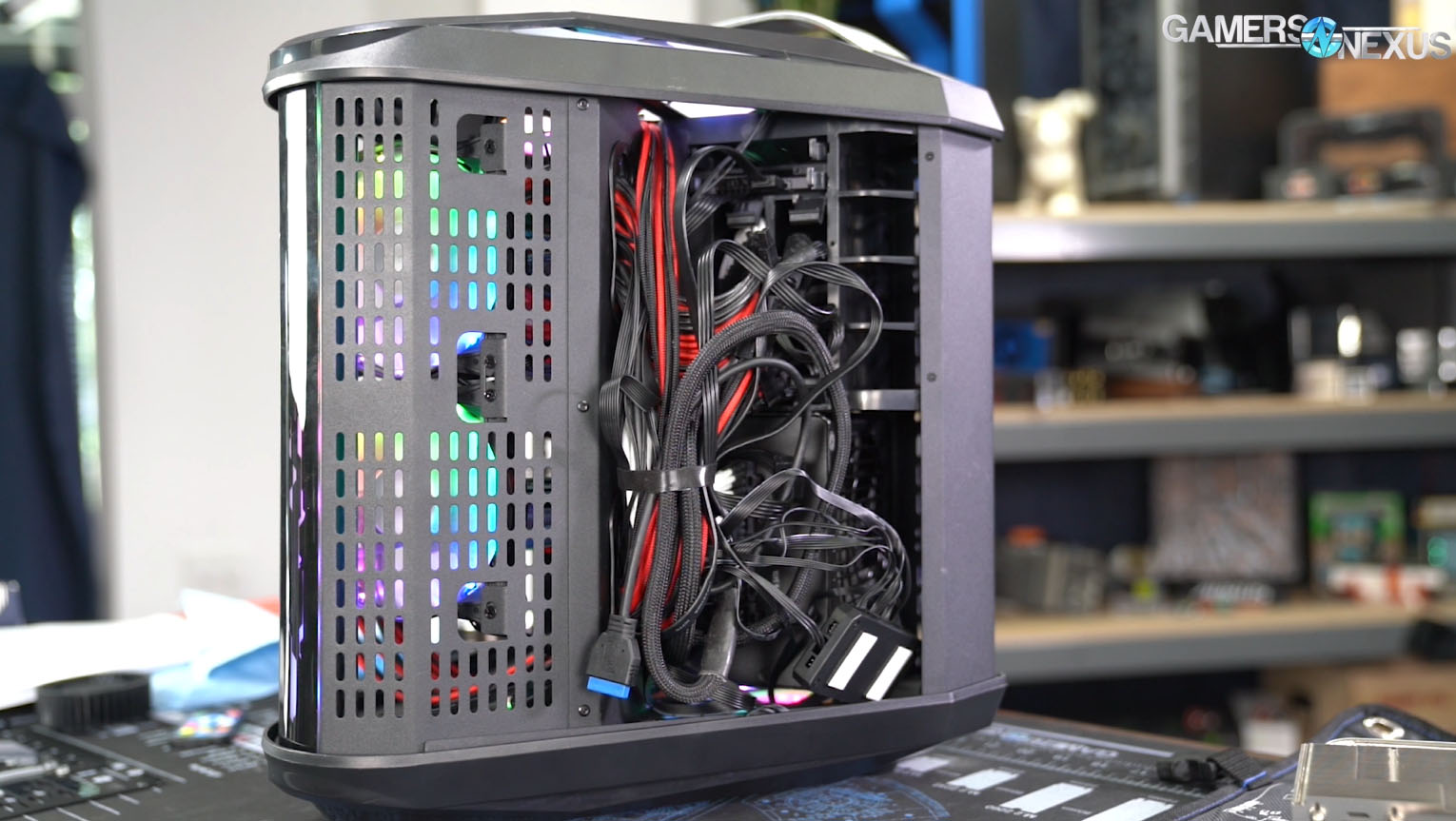 As mentioned earlier, the top intake fan is covered by a pane of tempered glass. There are some small vent holes around it that might allow air in but they are mostly decorative, so that top fan can’t do anything at all. The glass pane is held on with some extremely grippy double-sided tape. Removing the pane reveals an almost-presentable bare black plastic surface with some screw holes in it, so getting rid of the glass and flipping the top fan to an exhaust orientation could a viable option. The bottom intake fan is covered by a much more practical mesh filter, although the short case legs don’t give it much clearance from the desk surface. There are also six small 80mm fan mounts on the rear of the case, two behind the CPU and four behind the HDD/PSU chamber: we haven’t seen an 80mm fan in quite a few years, but putting optional mounting points wherever they’ll fit is an approach we can get behind. There are some other small but thoughtful touches, like screwdriver cutouts in the chassis for installing the GPU and a couple dedicated 2.5” drive bays tucked beside the 3.5” drive bays. 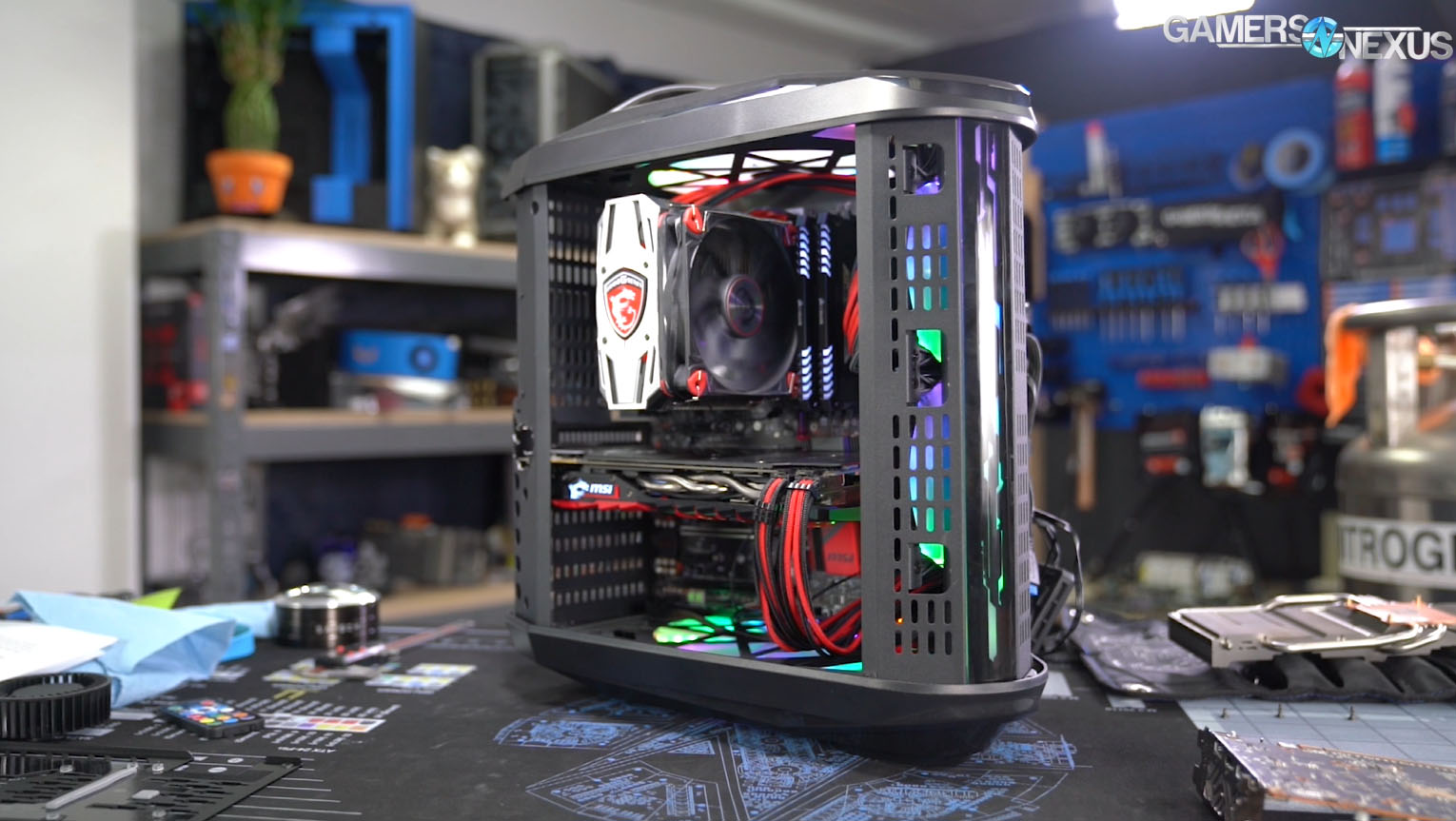 We also have some complaints, of course. No motherboard standoff shipped with the case and we had to supply our own; technically, the shopkeeper did offer to include some, but we rejected the offer as we knew we had them at home. She was going to dig through bins of screws and hand-pick them for the case, so they’re not included by the factory, but were offered by point of retail. The fans have 6-pin connectors to control both RPM and LEDs and must be attached to the fan/LED hub instead of the motherboard. The hub itself does accept control via a connection to the motherboard, but the necessary cable wasn’t included. There’s only a single USB 3.0 type A port on the front panel and two USB 2.0 ports, although there’s a blanked-out spot for a fourth port. The metal handle at the top of the case that should make it portable is sturdy and securely screwed into the top panel, but the top panel is just clipped onto the body of the case without screws, so it wouldn’t take much for the case to fall out from under the handle. The bottom panel is attached the same way--both were very hard to pull off the first time, but almost too easy afterwards. The side panels are held in by the top and bottom panels, so in order to remove them either the top or bottom panel must be removed first, after which both side panels flop out onto the floor. Reinstalling them is even trickier. 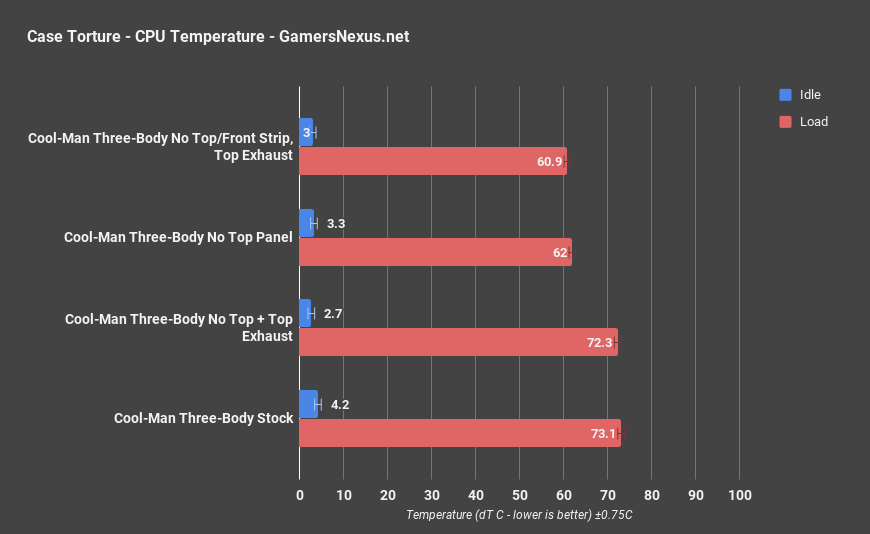 Thermal testing is our next stop, starting with just CPU thermals with only the Three-Body. We’ll look at it compared to other cases after that.

The Threebody averaged 73.1 degrees Celsius over ambient for CPU temperature in the torture test, which dropped enormously down to 62 degrees delta T over ambient with the top panel removed. That’s not a configuration we’d set up for daily use since it’d be prone to collecting dust--leaving the panel off and flipping the top fan over for a straight bottom-to-top airflow path is more logical move that resolves dust concerns, but it averaged nearly the same as stock at 72.3C dT. This is an issue with suffocated intake; the case can’t get enough cool air from the bottom or front to even supply the top fan as exhaust. Keeping this configuration and removing the plastic cover in front of the LED strip at the front corner resulted in the best result of all, though, averaging 60.1 degrees over ambient. Removing the plastic strip exposes a tiny area of ventilation to the two 120mm front fans, which are otherwise completely starved for air. It’s ugly, but it works. 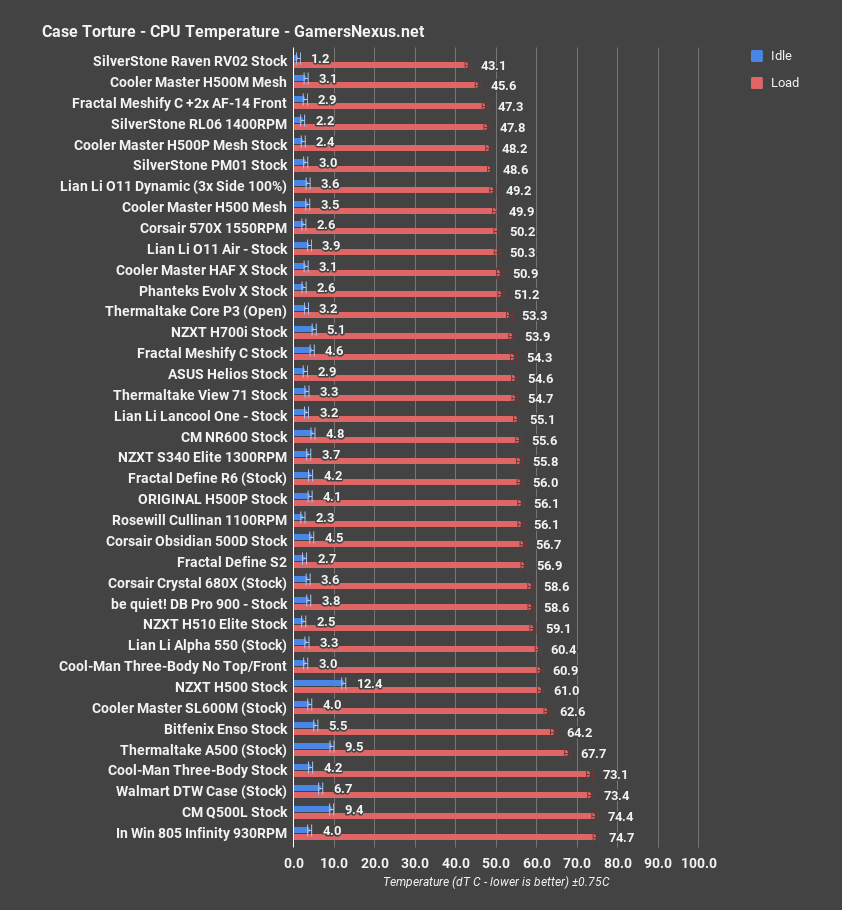 Compared to other cases on our chart, the Threebody’s stock temperatures are abysmal. Even the best-case temperature with the top and front panels removed only puts it on par with the Lian Li Alpha 550, but it’s a good indicator of what could have been. If the plastic side panels didn’t extend all the way around the front corner of the case and instead left an area of mesh exposed at the front, the two 120mm fans would do a much better job of cooling the CPU, although the extra parts and tooling would add to the cost. Giving the bottom more spacing from the table and more open intake would help. The stock case is about the same as the Walmart case, one of the worst we’ve tested. 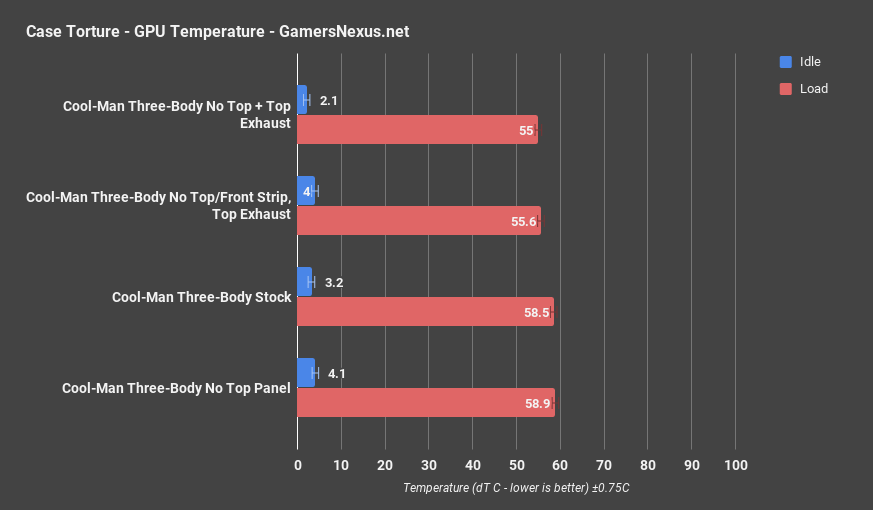 GPU torture temperature averaged 58.5 degrees Celsius over ambient in the stock torture test with the 200mm bottom intake fan pushing cool air directly into it. Removing the top panel had no significant effect, but flipping the top fan to keep air moving in a straight line lowered the average to 55C dT, but removing the front strip to let the front fans breathe didn’t improve things further. The GPU is directly in the path of the bottom-to-top airflow pattern we created, and temperatures are largely unaffected by the front intake, which is mostly above the level of the GPU cooler. 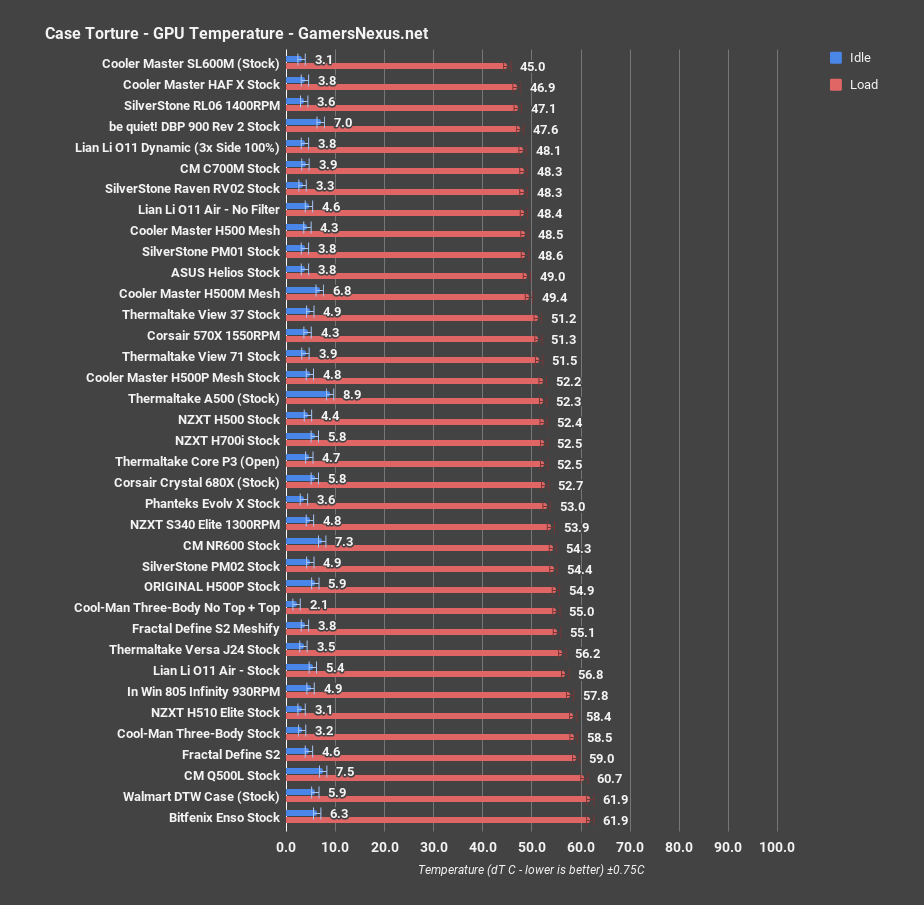 Comparatively, 58 degrees over ambient for the GPU is warm; 55 degrees with the alternate configuration is average at best, equivalent to the original Cooler Master H500P. With some room to breathe, the bottom fan could do a much better job of supplying cool air. The size of our GPU also limits how effective a vertical airflow path can be, since there’s little room for air to travel around the card. 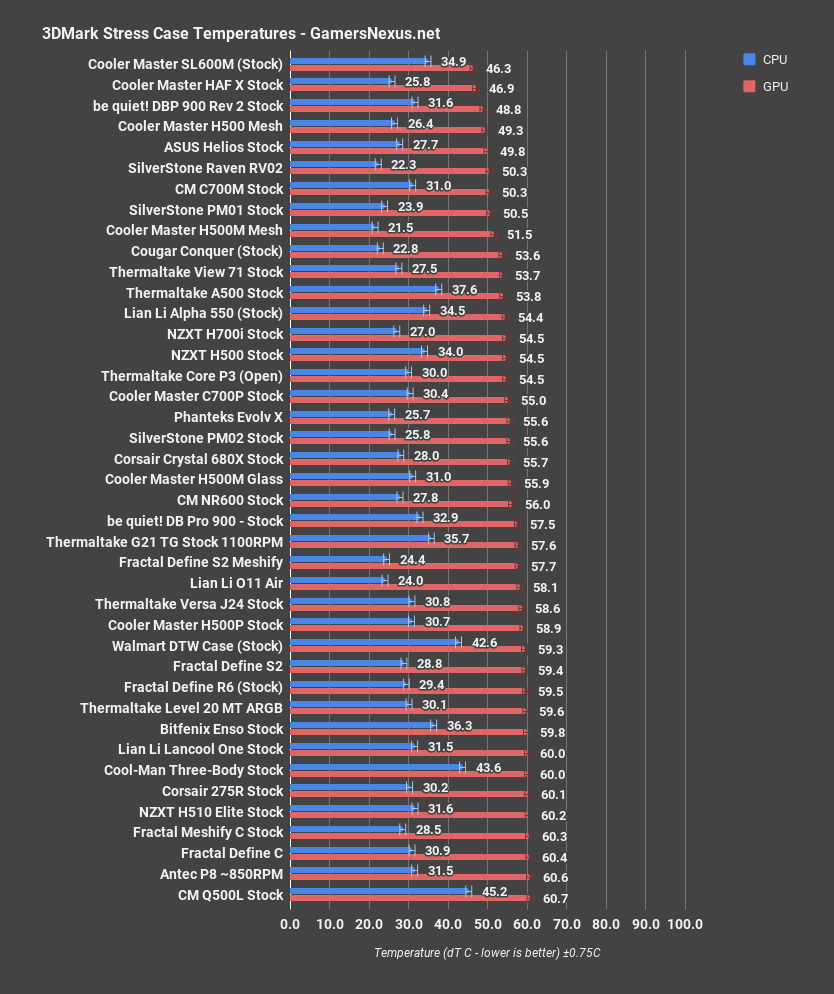 Firestrike GPU dT tells the same story that the torture test did: it’s a warm case in the stock configuration, with the top and bottom 200mm fans fighting each other and pushing warm air around inside the case. There’s not a good way to improve on that without altering the case or moving fans around: even adding an 80mm fan or two to the rear of the case would only benefit the upper half where the CPU is housed. 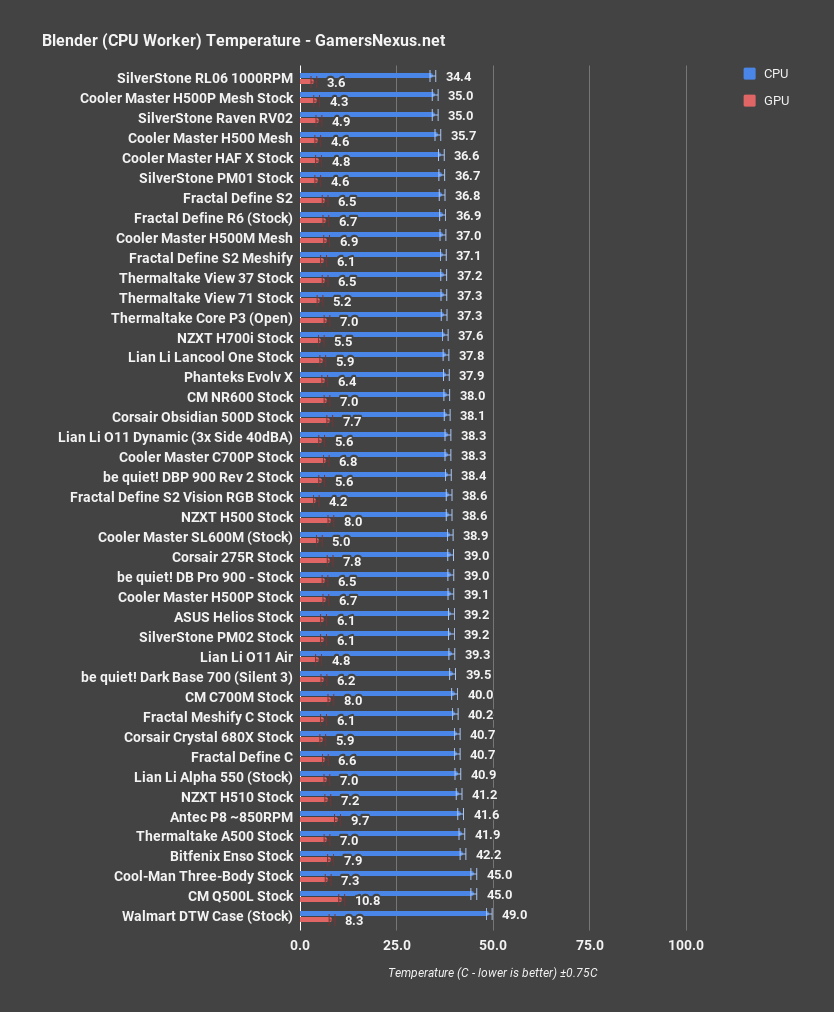 Blender is next, starting with the CPU-only workload. 45 degrees Celsius over ambient for CPU temperature when rendering on the CPU is one of the warmest averages on our chart, at the level of the Q500L. This is in the stock configuration, so the only fan that is directing outside air into the CPU cooler is the top intake fan, which is completely covered by a pane of glass with almost no ventilation whatsoever. The path to the bottom intake fan is blocked by the GPU, and the front intake fans can only recirculate hot air from inside the case. 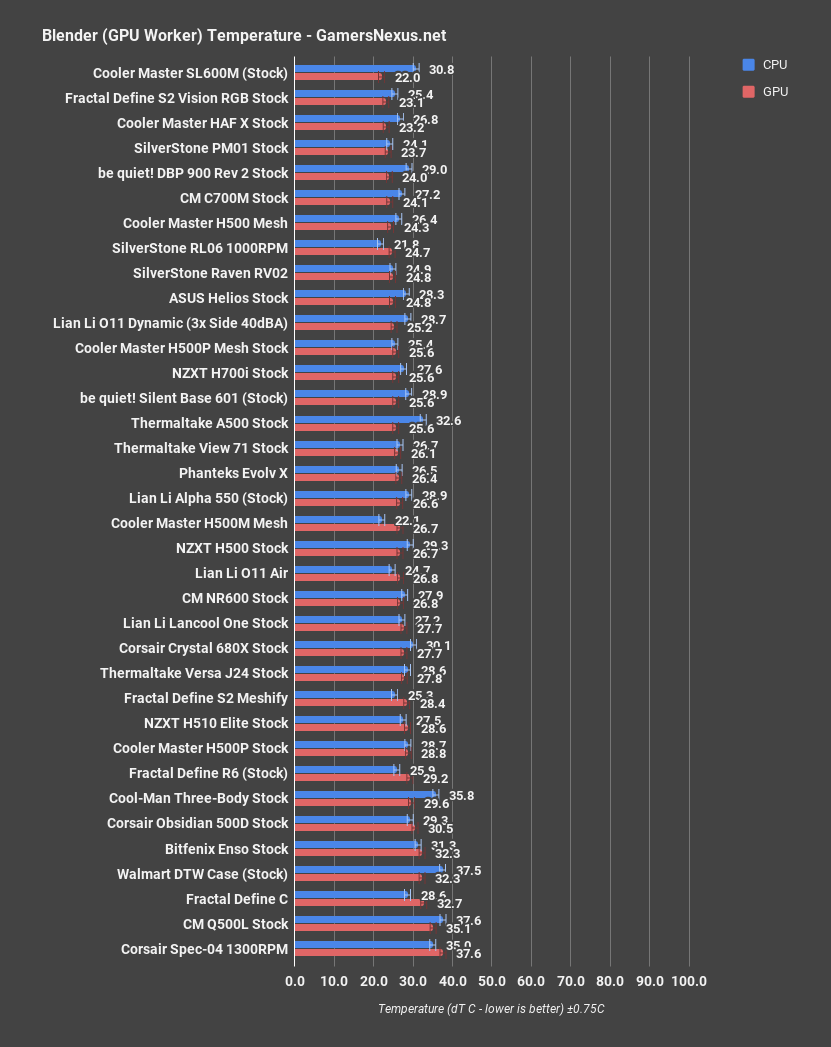 GPU testing is next. 29.6 degrees Celsius over ambient for the GPU with the GPU-accelerated render isn’t as bad as the CPU delta was, relatively, but it’s still only as good as the stock Define R6. The bottom intake fan does have the advantage of a mesh cover instead of glass, but the case legs are too short to allow much air to flow under the case and into the fan. 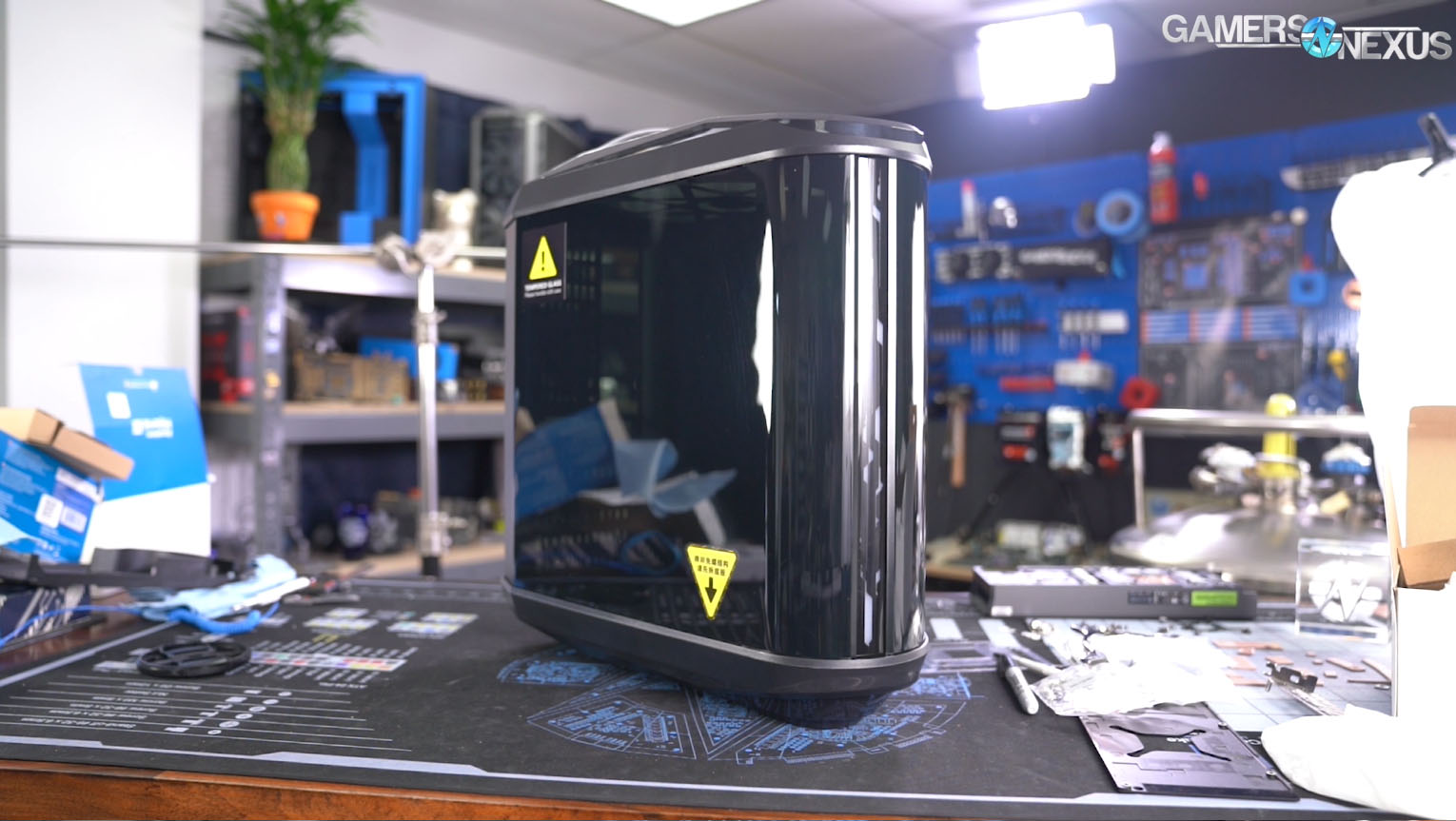 The Threebody was a fun experiment with some potential. It isn’t a good case, but there are some surprisingly good design elements that we’d like to see a major manufacturer’s take on. The two 200mm fans and the triangular layout could work well with taller case legs and more ventilation. We even got some genuine use out of the big handle, at least until we realized the top of the case wasn’t screwed into the chassis. $60 is dirt cheap for a PC case, especially one with four fans and RGB LEDs preinstalled, and investing more in the build quality of the Threebody could turn it into a decent mid tower.