The primary difference here is the heatsink construction: The Respire T40's aluminum heatsink is a full 20mm wider than the T20 and, more importantly, has a superior heatpipe configuration. The T40 routes four 8mm heatpipes to the surface of the CPU whereas the T20 routes only three (2x6mm, 1x8mm) heatpipes to the CPU, giving greater surface area to the T40 and making it more capable of spreading and dissipating heat rapidly. 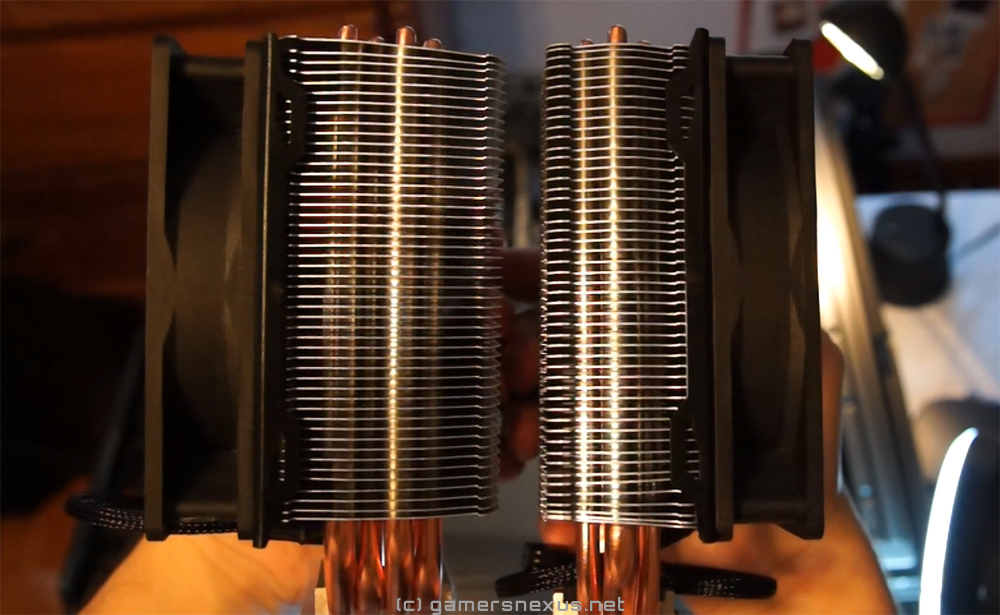 Both coolers are dual-fan ready and ship with mounting brackets for additional fans, so if you'd like to add a separate 120mm fan or replace the existing fan, that's readily done. As a quick aside, adding an extra 120mm fan to the T40 should use the middle-ring screw points (it won't fit if you use the first ring). 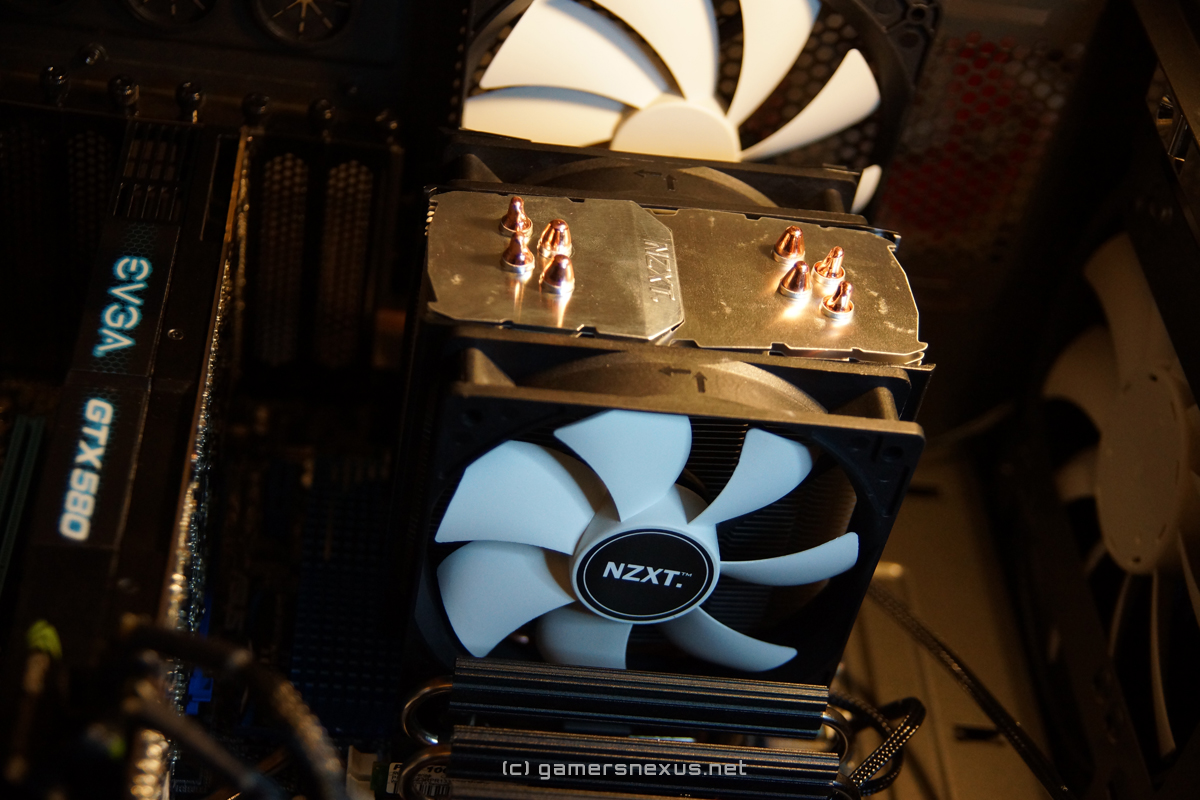 The thermal compound that ships with the Respire T20 and T40 is identical, measuring in at 4W/mK (and comparatively, this really isn't that bad -- but aftermarket options are still superior). If you're curious as to the thermal conductivity's importance, here's our guide on how thermalpaste works:

As long as you're running one of those socket types, the products ship completely ready to build with, so you don't need to order any add-ons to get started.

The focus of this quick comparison is, of course, actual benchmark performance. With only $10 separating the two coolers, it quickly becomes a question of "is an extra $10 really going to get me anything I care about?" I think we have that answer for you. Here's how we test coolers:

After this idle time, the system will launch a Prime95 instance running eight torture threads on Large FFTs for maximum heat and power utilization. This is run for 15 minutes, throughout which the logging utility will collect the data we used in the below charts. A final round of idle time is allowed to ensure data consistency.

We keep a consistent case and airflow configuration for all CPU cooler tests. When under load, the CPU operates at 150W.

Does the type of thermalpaste matter? Stock vs. Aftermarket Thermal Compound

For this test, we decided to also try the stock thermalpaste versus aftermarket thermalpaste. It is a legitimate use case scenario that system builders will, of course, use either aftermarket or included compound, so the test makes sense; for this benchmark, we used NZXT's 4W/mK stock compound against Antec's popular Diamond 6 series thermalpaste, rated at 5.3W/mK.

One of the most common forum questions pertaining to CPU coolers is with regard to fan add-ons: Is an extra CPU cooler fan really worth it? In this case, we decided to put that to the test and run the T40 in both single- and dual-fan configurations for comparison.

Believe it or not, there was actually a noticeable difference for both of these extra tests. Let's look at the graphs. 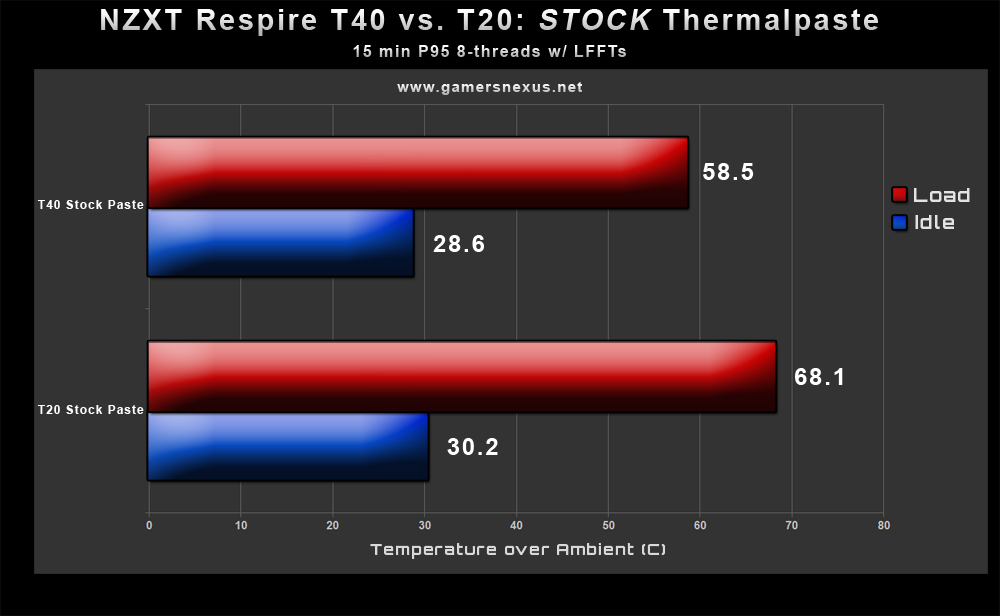 In this chart, we see the T20 vs. T40 using stock thermal compound. The Respire T40 operated 1.5C cooler when idle than the T20 and 10C cooler under load than the T20. 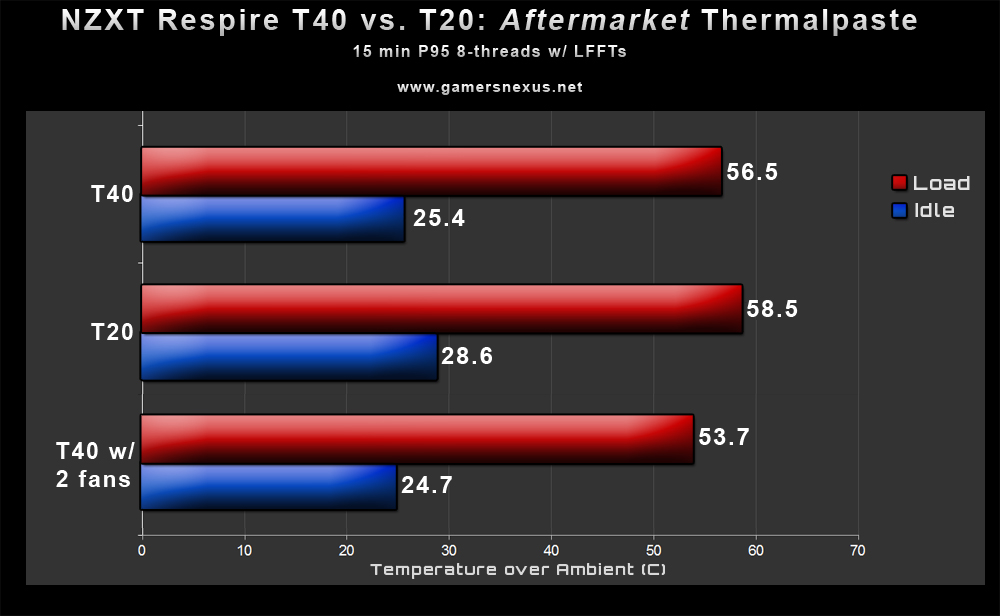 In the above test, we swapped the thermalpaste with Antec's 5.3W/mK option. This chart reveals the T40 operating 3.2C cooler than the T20 when idle and 2.1C cooler when under load. You'll notice a large differential between the load tests (yes, we also noticed it), so we ran the test a few times (including full re-installation of the CPU) and received similar results the second time.

The above graphic also includes the T40 with an extra 120mm fan, where we see 1C cooler idle temps and 3C cooler load temps.

Great, so there's some data. As for what it all really means, that will vary greatly depending upon your intended usage. We're assuming that you're intending to do some basic overclocking (and if not, it's pretty easy) with these coolers, and if that's the case, the extra fan or better thermal compound would be worthwhile for upper-range clock speeds. Every degree counts when you're balancing on the ledge between "acceptable" and "holy Gaben, pull the plug!" In this vein, the T40 makes for an excellent launching platform for novice and intermediate overclockers at a low price. If overclocking is a minor concern or completely off the radar, the improved thermal compound or additional fan will really make no noticeable impact on your gaming or computing life.

The bracket design may have an impact on your system building and blood pressure during installation, though. As with many of the low-to-mid-range CPU coolers, I fought against sliding coolers and loose mounting points to properly seat the T20 and T40 in a satisfying manner; the dual-screw mounting plate tends to favor one side or the other (this was an issue with both models), making one side more difficult to screw in properly. This results in the heatsink sliding around the surface of the CPU, which then makes a mess of the thermal compound.

After three re-installations (for testing), I also noticed that both mounting screws were beginning to shed a few metal shavings onto the underlying adapter bracket. Now, the likelihood of a short from the (relatively) small metal fibers/shavings is, perhaps, inconsequential in the immediate future, but prolonged use may be different. With that noted, I'd be concerned to leave any amount metal fibers circulating in my case -- one unlucky landing on an integrated circuit, cheap / exposed bypass cap, or inside the PSU, and you could be out of luck. I'm hoping that this was a fluke with our review model, but can't be certain. 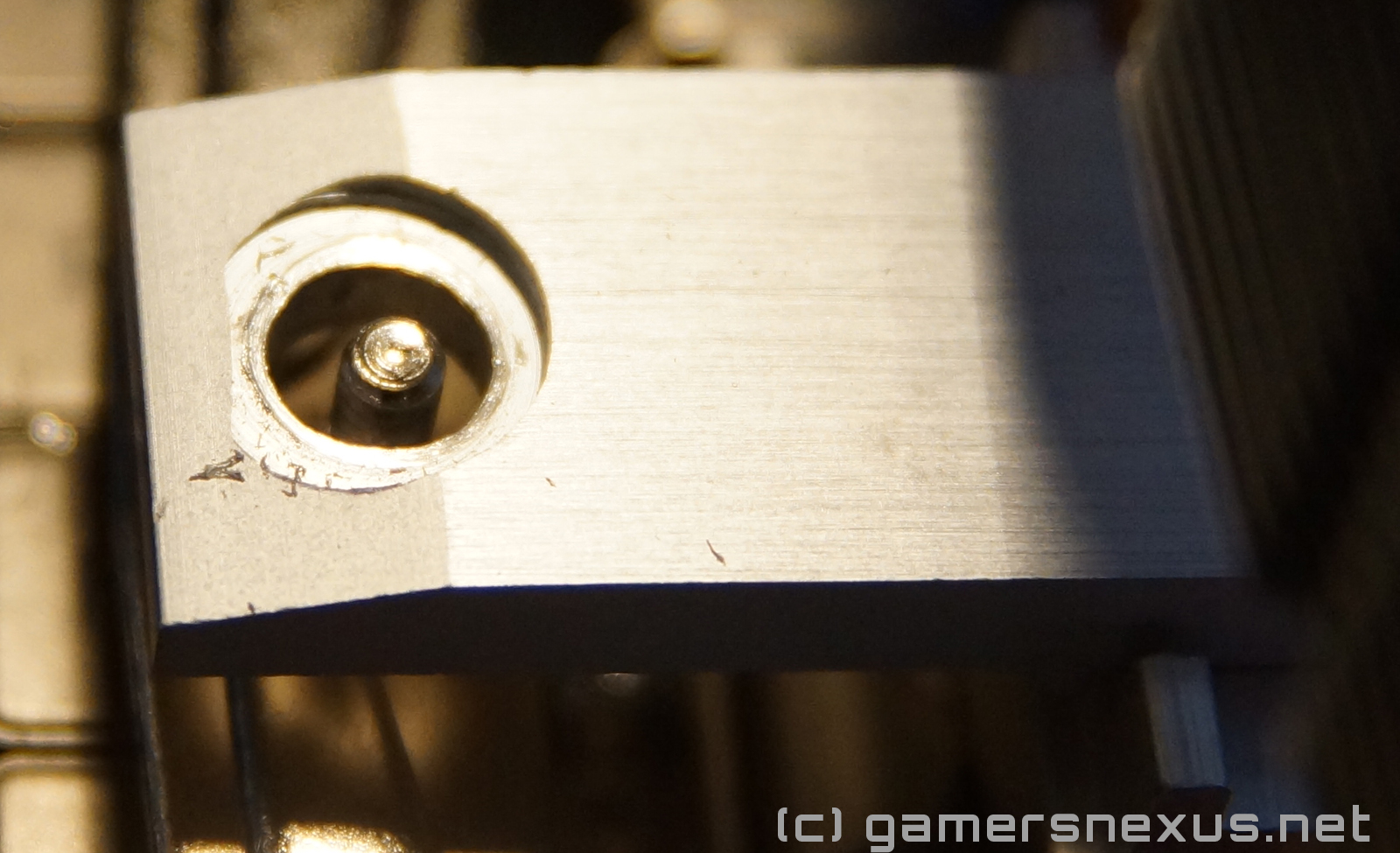 A few of the metal shavings.

At the end of the day, it's performance that counts. The two coolers are both reasonable products and will have a fantastic Black Friday sale, from what we've been informed, and should absolutely be on your radar for their sale prices. There are a lot of budget coolers on the market, and for the most part, they all perform largely the same. The Respire series fits right in with the rest (like the Hyper 212 and low-end Zalman models), and if you're deciding between the T20 and T40 specifically, we'd push you toward the Respire T40 for most applications. Lightweight builds that aren't doing much overclocking will run contentedly on a T20, but the performance gains in the T40 are noteworthy enough to make it worth the $10 extra.

We'll have a full CPU cooler round-up article online as soon as we can get some more low/mid-range coolers tested.

Let us know if you have any questions!