Statistical Analysis: What Were the Most Popular GPUs & SSDs on Black Friday?

Like many sites, our site relies heavily upon referral commission from online retail outlets. It's a fairly straight-forward operation: We help our readers build computers, find the right video card, and test games; in return for this free service, we earn a small commission on sales from Newegg, Amazon, and similar online retail outlets. It's not a lot of money, but it's something.

Now that Black Friday is over and all of the sales are reporting in, we started analyzing data to see which items were the most popular referred purchases through our site. This isn't representative of the most popular hardware in the industry – just what was recommended on our site – but is a good cross-section for what PC builders are interested in.

As an exercise of data analysis, we decided to work with our affiliate network to determine which video cards, GPU brands, SSD capacities, and SSD brands were the most popular during Black Friday. Video cards and SSDs far-and-away drove the most sales, with CPUs (almost entirely dominated by the 4690K) and motherboards coming in third and fourth.

Note that, by the nature of the data available to us, these numbers are dictated almost entirely by our content. Our GPU buyer's guide listed what we thought were the best video cards in each price range, favoring AMD up until the GTX 970 & GTX 980. We made alternative recommendations to each video card from the competing brand. For example, we'd recommended the R9 270 (~$147 at the time) for the sub-$150 price range, but then suggested the GTX 750 Ti as a cheaper alternative to that ($130). The GTX 980 stock levels fluctuated before Black Friday, resulting in the units we'd recommended being out of stock, so you won't see the 980 in this chart. 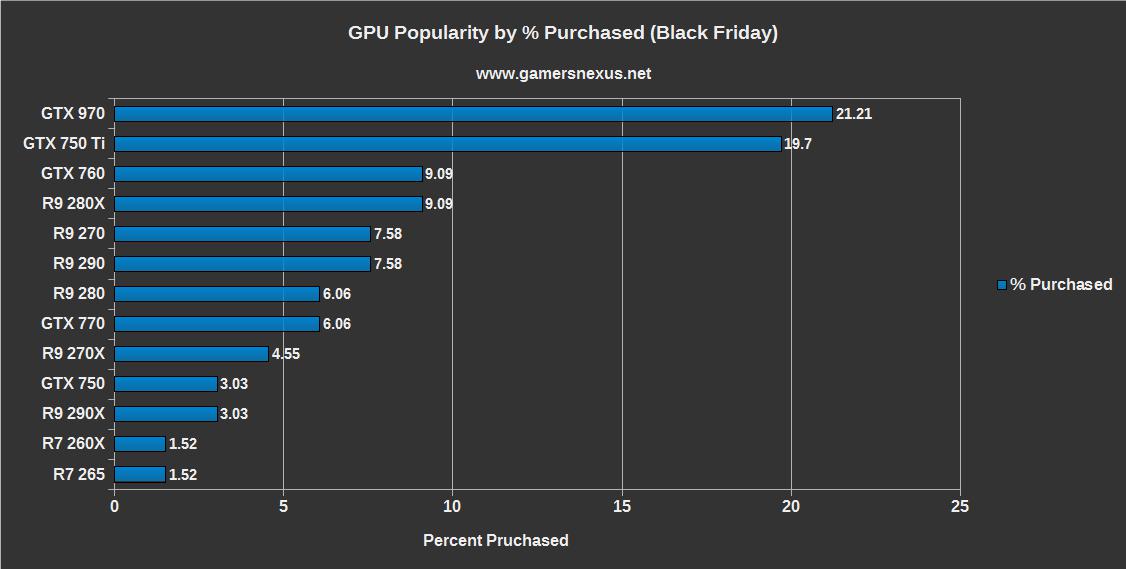 Despite favoring AMD in the sub-$100 and sub-$150 range for affordable GPUs, the GTX 750 Ti was showcased as a bit of a low-TDP mid-point that still performed well for most games. It seems that most of our readers favored nVidia in general, with 59.09% of GPU purchases being GeForce cards. Of these purchases, the GTX 970 – as we'd predicted – became the leading graphics card for the holiday season. Its highly efficient performance and (for nVidia) surprisingly low entry-to-market price secured a leading 21.21% marketshare of our referred purchases. Following the GTX 970, the GTX 750 Ti – despite recommendations to purchase the R9 270 in this range – netted 19.7% of sales.

The Most Popular SSDs

As for SSDs, we decided to look more closely at capacity than models. Last year's data (which we did not publish) showed the 240-256GB capacities to be the most popular units; with the tremendous SSD price drops and availability this year, we saw 480-512GB SSDs steal the spotlight for most popular capacity. 120-128GB SSDs are still popular, but have fallen significantly. We did not see any >512GB SSDs purchased through our articles, but we also didn't recommend any. The same goes for SSDs smaller than 120GB.

The most popular brands, notwithstanding our general recommendation of Crucial's MX100 for most gaming environments, were led by Samsung and Intel. Samsung's 840 EVO saw frequent sales throughout Black Friday and the ensuing weekend, likely fueled in part by controversy surrounding the 840 EVO's firmware; the firmware issues have now been resolved (patches available online), but I'd imagine that still impacted price. The 840 EVO regularly had 500GB models available for $200 or less in a few instances. Intel's 730 SSD paved the way for 240GB and follow-up 480GB solutions, likely purchased by our readers who are building enthusiast-class or production rigs. Following these sales were Crucial's MX100 SSDs (mostly 128GB, some 256GB) and Kingston's SSDNow V300 (in spite of controversy) and HyperX Fury drives. PNY followed the pack with XLR8 and Optima sales.

We thought these statistics were somewhat fun and interesting. Let us know if you have any suggestions for analytical posts like this in the future – we've got the data available.