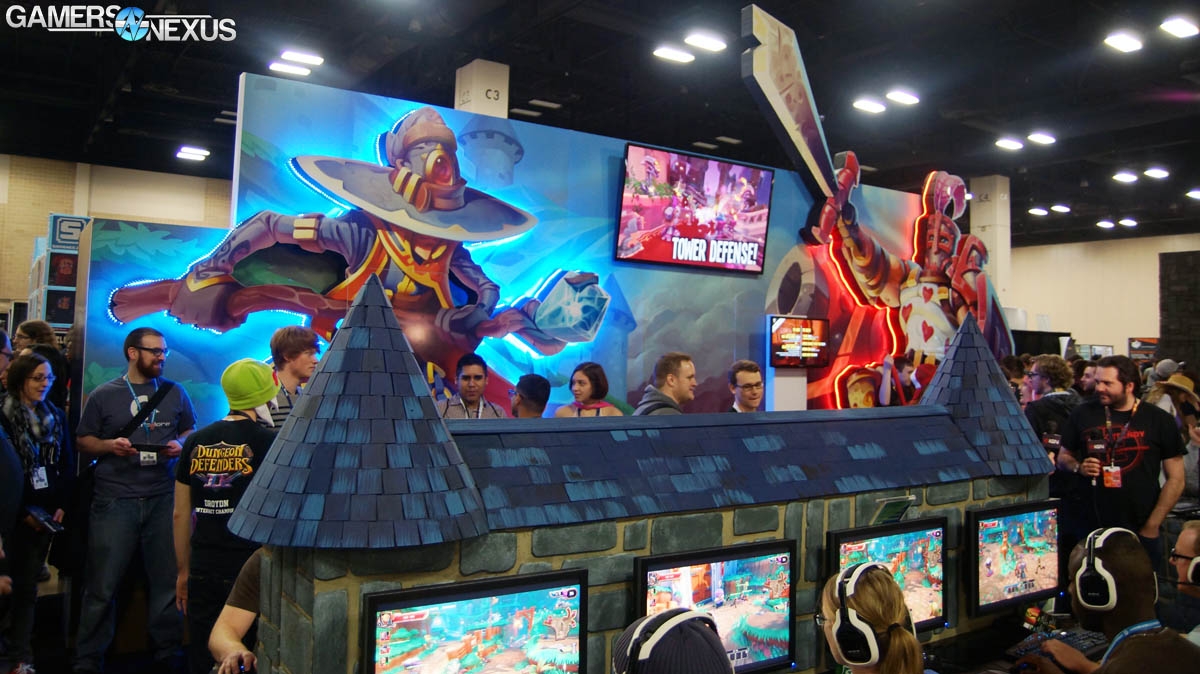 PAX South is brand new. The event is hosted in San Antonio, Texas, about an hour away from the booming tech hub of Austin. South didn’t have quite the saturation of AAA studios that we encounter at East and Prime, but still featured a few better-known developers and publishers. The list of large-ish games included Elite Dangerous, Guild Wars 2, Dreadnought, and Gigantic; hardware vendors included heavyweights Intel, NVIDIA, EVGA, Astro, Logitech, and others. Star Citizen also showed a big presence at the nearby Aztec Theater, where its Town Hall was held to discuss the upcoming persistent universe module (full coverage online, including videos).

We don’t yet have official foot traffic metrics, but speaking from years of experience, the overall attendance seemed more limited by engagement opportunities than by actual turn-out. What we do know is that more than 120 exhibitors were present at the show itself, a strong start for the first PAX South gathering.

PAX events have a wide scope of action items for attendees. There are dozens of high-quality, diverse panels; there are concerts and after-parties, alongside attendee-organized events; and there are exhibitor booths (with playable games, for those who care enough to wait) with staff on-hand. PAX South had all of these, but was a bit more limited in quantity than its larger siblings.

It took us about five minutes to walk from one side of the hall to the other and “see” everything. Once that was done, we’d finished most of the booths by the end of day 1. Interestingly, the smaller population of triple-A vendors sort of forced attention toward indie booths; in talking with more experienced exhibitors, we were told that the foot traffic to their booths was as good (or better) than PAX Prime, given that attendees run out of bigger games to wait for and the smaller building.

A few interesting panels headed-up by the Guild Wars 2 team and Chris Roberts (of Star Citizen) were worth attending, but our overall interest in panels was lower than at other events. NVIDIA hosted its usual “give stuff away and recap the last month of news” panel, filled to capacity like always. Fun / comedic / nerdy musicians MC Frontalot and Paul & Storm (among others) headlined the concerts, as they’ve done at PAX events for several years prior, and are always worth seeing.

Austin is home to Cloud Imperium Games (Star Citizen), Portalarium (Garriott’s studio), EA Games, AMD, Dell, Blizzard, Bioware, and more. There’s a tremendous tech industry presence, evidenced by the rise of SXSW Interactive, and PAX South is asking the industry to move an hour south to San Antonio for the weekend. It almost feels like an oversight that PAX South doesn’t stake its flag in Austin’s turf, something that both RTX and SXSW have shown is successful. A new convention like this has financial, political, and logistical limitations that may favor the San Antonio location, but we’d hope that Penny Arcade seeks transplant to Austin in the near future.

The San Antonio location is more difficult to get to (fewer direct flights, poor roads), has limited entertainment and food options outside of the riverwalk, no nightlife, and certainly doesn’t have the best convention center we’ve ever been in. I should note that I’ve previously lived and worked in Austin and have experience with both cities. Austin has more established infrastructure, to include network and electrical capabilities more adequate for high-bandwidth, energy-consuming events (systems won’t throw breakers and media will have better upload rates). Given the industry presence in Austin and UT presence, it’d likely have a larger roster of after-hours events to attend as hosted by publishers and developers.

Each of our game or hardware interviews was concluded with small talk surrounding the convention, and not one exhibitor voiced favor toward San Antonio. Every one of our interview subjects questioned the lack of an Austin presence. We figure it’s a limitation of finance (trying to determine if PAX will be successful first) and politics (encounters with RTX or SXSW could involve unseen logistics challenges).

Perhaps the PA team will consider a change as South grows.

As for the time of year, January is a tough one. By running in January, PAX South is flanked by CES and SXSW / GDC, with PAX East a little over a month away. This results in hardware companies who’ve already shown everything (at CES, just two weeks prior) and game companies who’ve got launches in March or April. Very few games are announced in January, the major titles shipped in the holiday season (and so are no longer on the PR circuit), and the upcoming titles will be hosted at East. South will face logistical issues in its early stages, though we hope that the PA staff will look into the possibility of spreading things out a little more.

As a consumer event, the logistics are perhaps of less concern to attendees. It’s exhibitors and media who will struggle to garner ROI on a January show so tight between other events.

This section is more relevant for exhibitors considering attendance. Despite some of the time and location concerns listed above, we were overall impressed with foot traffic and attendee volume. In speaking with some of the more experienced exhibitors who appear at larger shows, we were told that companies were happy with visibility and consumer interest. Some exhibitors informed us that the booth traffic was actually higher at PAX South than at Prime, given the more straight-forward convention center layout and the smaller quantity of competing booths. It’s possible for attendees to visit every booth in about 1-1.5 days, whereas the larger events (East especially) are unlikely to permit any single attendee from visiting everything.

From what we were informed by our contacts, booth spend is about the same as the other two events, but value is arguably higher given the visibility boost explained above. We encountered several of our gaming and hardware industry contacts scouting under attendee guise (no booth space), and in speaking with them, it sounds like a year-two presence is likely.

Is PAX South Worth Going To?

This section is for attendees.

PAX South will grow – all PAX events do – and it will likely be forced to move to a larger convention center in the near future, as has happened for previous events. As the event grows, it will become more worthwhile for those traveling via plane and investing in hotels. The advantage of Texas is that it’s extremely cheap to get to, despite the lack of direct flights to San Antonio. Most airlines have a major hub in either DFW or AUS, meaning that flights to either are inexpensive. Our cost was about $250 from the East Coast, which is dirt cheap when compared to travel cost for Seattle. Hotel prices are as expected.

Given this information, we’d still favor Prime and East where possible, but those are difficult to get into and maxed-out on capacity. South makes for a well-suited plan-b for the time being, but we expect it’ll grow to compete with its siblings in demand shortly. In-state travel from Austin and other nearby cities seems like a solid fit for now.

As an attendee, you’ll probably be able to get through everything in about a day or two. Prime and East are more certain to require three-day presence (especially for travelers seeking value), but South can be handled on a Saturday.

We’re excited to see PAX continue its boom in the US. As media, PAX has a more “real” connection and feels less heavy on marketing and PR than some of its competitors. Here’s hoping to a prosperous future for the show.