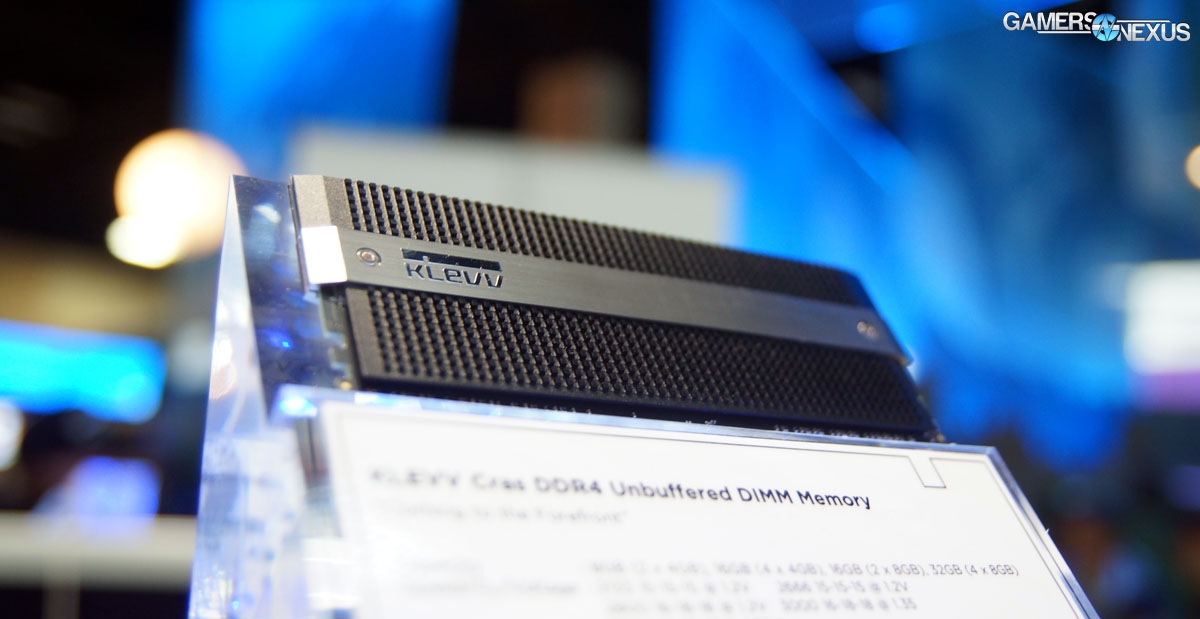 In speaking with Klevv's management, we've learned that the company hopes to leverage its subsidiary relationship with SK Hynix to manufacture lower-priced, high-quality memory for consumption. Klevv aims to compete with the likes of Corsair's Dominator and similar brand-recognized kits, but at a lower price given the unique supplier/manufacturer relationship. Initial kits bear more of a “German engineering” approach, from what Klevv designers told us, referencing the likes of BMW and Audi as a comparison to the market positioning objectives. To this end, Klevv aims to minimize impractical additions to their products – to include color choices and flashy, unnecessary heatsinks – and favor raw performance and affordability.

This philosophy is reflected in Klevv's early memory kits, including the DDR4 “Cras.” Klevv's 3000MHz Cras ($480) memory is targeted at an IT environment, featuring ultra-slim, textured heatsinks. To this end, the heatsink eliminates bulk (and cost), but still serves its function adequately and has a discreet-but-quality look and feel.

Some of the kits we previewed (Klevv Genuine - $108) were reminiscent of a Corsair Dominator design, but slightly more affordable. A more gaming enthusiast model, the Genuine includes an LED strip toward the top of the heatsink, emitting a soft white glow from the sink.

Klevv's most budget-friendly memory is presently $83 for 2x4GB at 1600MHz (the Neo), making it slightly more expensive than the popular HyperX Fury and G.Skill options.

Memory is a Commodity

Let's face it: Memory is boring. At this point, RAM is so stably developed that the primary “innovations” come in the form of either color, price, or LEDs. It's unfortunate, but the consumer market has an established perception that larger heatsinks equate objectively superior memory, even for consumer-class 1600 & 1866MHz RAM. The fact of the matter is, RAM doesn't get that hot and the supply comes from the same major three fabrication facilities. To this end, it becomes a commoditized component (as we wrote a few years ago) that is largely contingent upon price and color at time of purchase.

There's not anything necessarily wrong with that, it just means that breaking into the memory market seems a difficult and odd first order of business for a new company. The SK Hynix relationship establishes a larger pool of supply and resources than other new vendors, but we hope to see Klevv grow beyond memory (or innovate) in the near future.

Their RAM looks great, quite honestly, and I'd be a buyer of the Cras heatsink. It's just a tough market for newcomers.