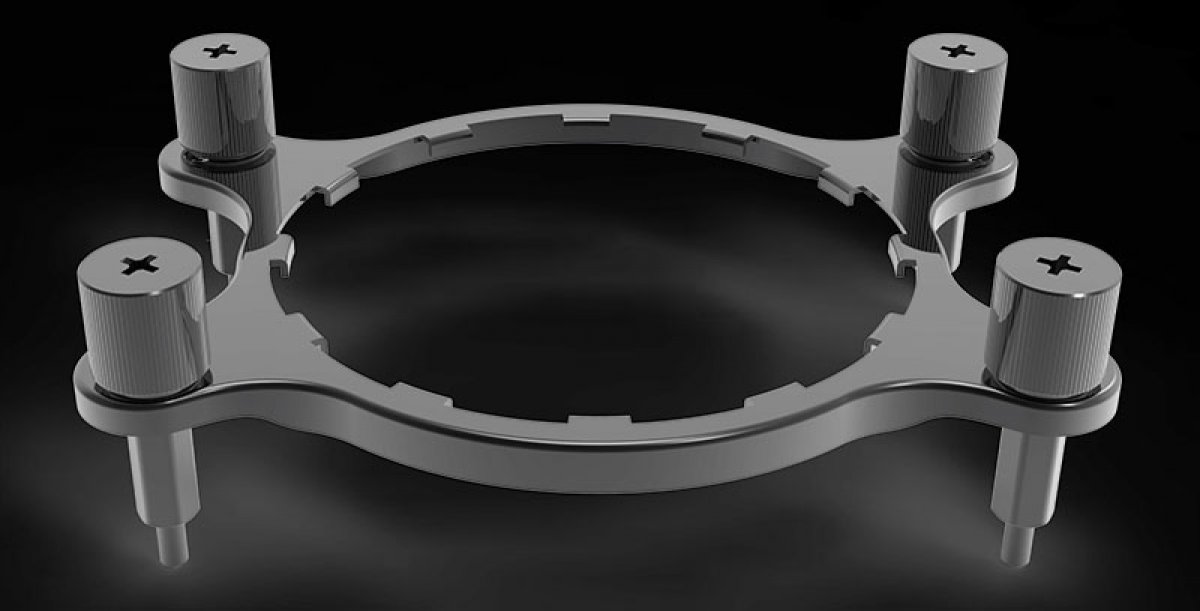 We reached out to a few of the CLC manufacturers and suppliers regarding AM4 bracket support, something we already spoke about in our initial 1800X review article on page 2. Since then, we have acquired further official information from NZXT, Asetek, and Corsair, and also managed to get ahold of a letter that was sent to an SI by a CLC supplier.

When Will AM4 Retention Kits Be Available?

From what we’ve been told by suppliers and manufacturers, wide, end-user availability should happen in the first half of April. There will be smaller air shipments leading to that point, but they will be of more limited quantity. First half of April is the target for wide availability. You won’t have much longer to wait, in theory.

When we asked Corsair for availability targets of Asetek-made coolers, Corsair responded that brackets will be provided for free, and that they should begin shipping next week. Corsair noted that they have thousands of orders, so it may take a little while to get through all of them.

Here is the email correspondence from Corsair:

Use CORSAIRAM4BR as a discount code for free shipping and the discount – you have to be logged into a webstore account.

For the rest of the range with AM4 brackets inc. in the box? TBD, but we are not repackaging product in the channel, so we have inventory to go through first.

We’re providing brackets for free for the Aseteks. Solutions tested and brackets should be shipping out next week. We have THOUSANDS of orders.” -- Corsair to GamersNexus.

NZXT should also be receiving its brackets for Kraken coolers next week, though the more realistic scenario is “early April.”

Coolers that use crossbar retention and dual clamp retention mechanisms – including most air coolers, CoolIT CLCs, and Cooler Master CLCs – remain unaffected by the delays. Only coolers using standoffs + cap screws with no cross retention are affected, as they could not get the force required to retain the cooler.

Why Were Retention Kits Delayed?

The bigger question is why AM4 mounting support has taken so long, especially since the manufacturers – that’d be Corsair, NZXT, EVGA, and their competition – are starting to take heat from consumers. From what we’ve found, it seems that the dissatisfaction should be directed elsewhere in the supply chain.

AM4 mounting holes have different spacing and pressure requirements from AM3, and manufacturers who use a custom backplate have had to retool to produce AM4 backplates. Manufacturers like Noctua did well with AM4, and were officially sent out with reviewer kits as a result. Noctua benefited because its main offering is an air cooler, and AMD’s official AM4 specification contained air cooler mounting force requirements. Cooling manufacturers, just like the motherboard manufacturers (ASUS, MSI, Gigabyte), had limited lead time provided by AMD prior to Ryzen’s launch. To put the time into perspective, we know that board vendors received final ucode updates on Feb 14-15, leaving a few weeks to get their EFI together. We also know that board partners did not get official retail sample support from AMD (in the US HQ offices) until after review embargo lift.

For cooling partners, it’s a similar story: partners had to scramble to prepare for launch, and lead times to ship new retention kits from China are long.

There’s more to it than just limited lead time, though, as you’d have brackets in your hands by now if that were the only issue.

“I can confirm that AMD has provided no hardware to support development of a retention mechanism for the AM4 Ryzen launch.” – Rob Teller, Asetek Desktop Product & Sales Manager in statement to GamersNexus.

Like other partners in the ecosystem, retail product was not made available to cooling manufacturers sufficiently before launch to prepare a product in time, and further, we have learned from cooling manufacturers that the mounting pressure defined in AMD’s spec is allegedly only for the pressure required to mount a much larger air cooler. According to the CLC manufacturers, the spec does not define the pressure required for a smaller pump. To this end, a pump would be loose on the IHS if mounted using the four screws method, whereas coolers that use crossbar retention would be able to make up for the lack of pressure from the standoffs and cap screws. This explains why the CoolIT-made Corsair products have been available: They use a crossbar for retention, so pressure wasn’t as much of an issue.

In a post NZXT made to its subreddit, the company stated:

“Thankfully, our friends at Tom’s Hardware brought to the public’s attention an issue with third-party AM4 cooling solutions, as the specifications supplied by AMD did not include the height of the backplate screw holders. This has created a discrepancy in backplates that does not allow for coolers to have adequate pressure on the CPU.”

NZXT continues to reiterate the same that Asetek told us, which is that “to further compound this problem, we were unable to receive an AMD-certified motherboard in order to test our Kraken AM4 solution.”

We then reached out to an SI that asked to remain unidentified and were able to get this statement, sent to SIs from CLC maker Asetek. Of import, the letter states:

“Due to unforeseen inconsistencies between motherboard and manufacturer’s back plate dimensions and AMD’s thermal specification, we are forced to make significant changes to our existing AMD standoffs to ensure we will not encounter problems with out of spec back plates.”

“[…] after receiving our CPUs and boards late last week, we confirmed that the AM3 standoffs do not provide adequate clamp force. […] We are currently rapid prototyping the new standoff and will have a mass production timeline by the beginning of next week. We are still targeting to supply customers with quantities of retention kits ordered by end of month via air shipment. […] Please keep in mind no Asetek customer has been provided a retention solution yet.” 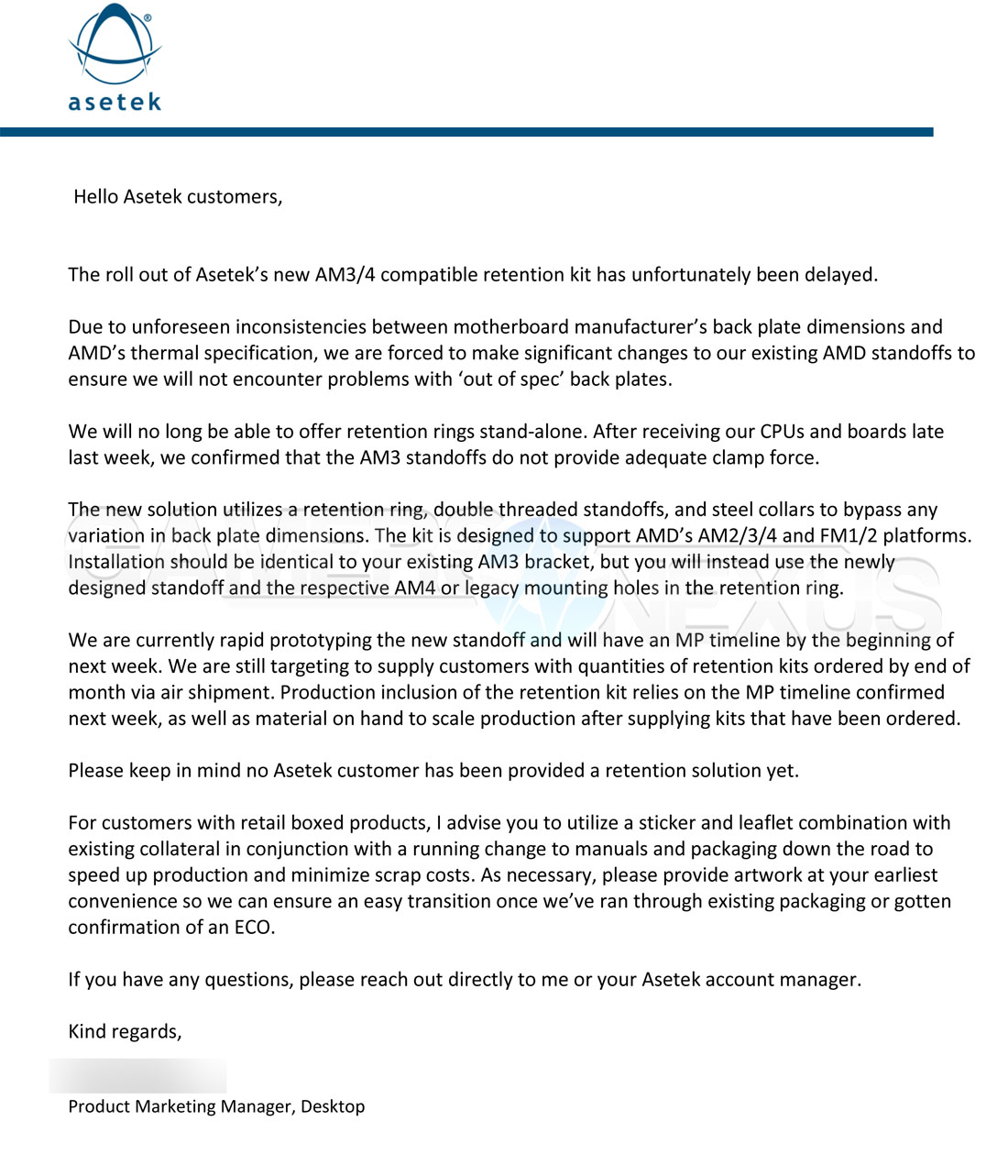 We understand that manufacturers have been applying pressure to the suppliers – quid pro quo, considering the consumer pressure applied to manufacturers.

Given all this information, we now have a better idea as to why liquid coolers with four-screw and ring-based retention systems do not have anything officially available. Coolers which use alternate mounting means, like crossbars, have been able to circumvent this issue altogether by nature of applying mounting force directly down the center of the pump, rather than at standoffs.

It seems as if the specification provided was missing information, though there’s also a mix of limited hardware for testing of retention force prior to launch. As of this publication, users of CLCs with four screw + ring retention mechanisms should expect retention kits within the next two weeks.