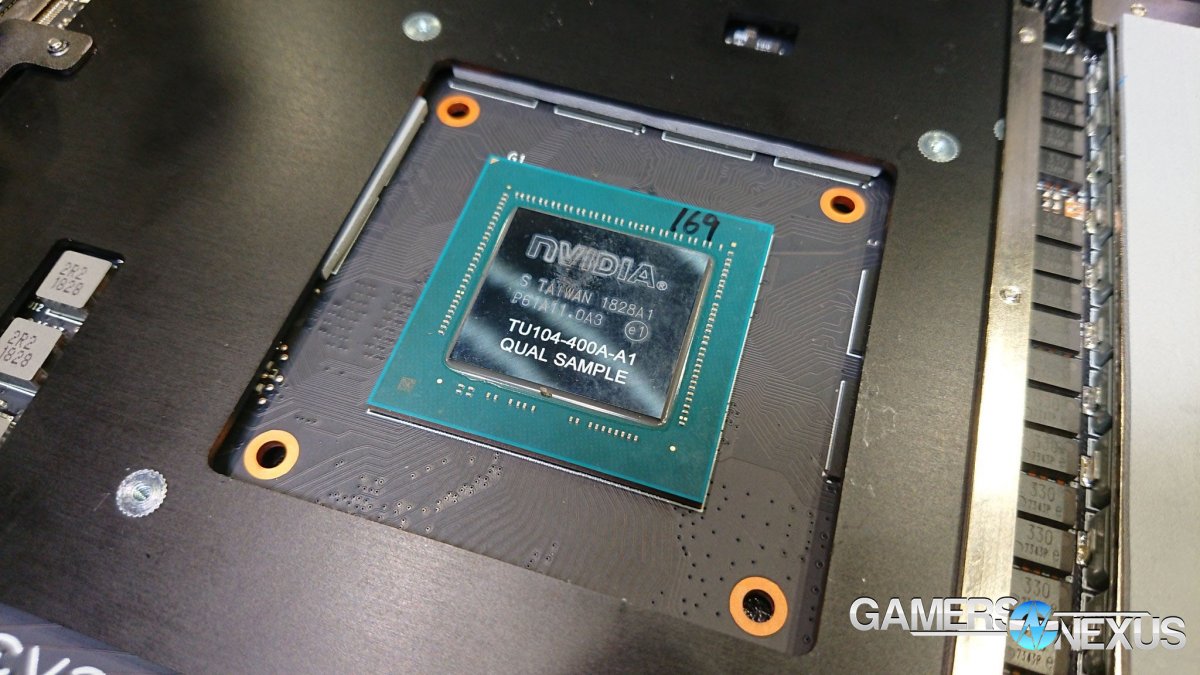 We’re finally nearing completion of our office move-in – as complete as a never-ending project can be, anyway. Our set table is now done, although not shown in today’s video, and the test room is getting filled. That’s the first news item. Work is finally getting produced in the office.

Aside from that, the week has been packed with hardware news. This is one of our densest episodes in recent months, and features a response to the Tom’s Hardware debacle (by Thomas Pabst himself), NVIDIA’s own performance expectations of the RTX 2080, AMD strategic shuffling, and more.

As always, show notes are after the video.

First, some GN news (aside from the fact that our store is mostly restocked): We are presently working on getting some art on the wall in the new office. Part of our plan now involves collecting dead, retired CPUs from our fans to make historical shadowboxes of old parts. We’re not asking for anything of value – sentimental or monetary – and ask that you only send your “junk” CPUs that have been stuck in drawers. There’s no guarantee it’ll be on camera, but we’ll do our best to incorporate it into our art plans. The mailing address is:

We’ve heard from multiple industry contacts that the US tariffs that may go into effect on September 6th are causing trouble for PC component manufacturers. The new tariffs are expected to impact component import cost by anywhere from 10% to 25%, depending on final decisions at the USTR, and those costs will largely be passed on to consumers. Right now, we know that video cards, motherboards, coolers, power supplies, and likely cases will be impacted. Most manufacturers with US-based warehouses have been importing as much product as possible before the decision, as the tariffs will only impact cost of items not yet in port stateside. Every add-in board partner is impacted and every power supply maker is affected, from what we’re told.

As for Amazon’s role in all of this, our sources at PC component manufacturers have indicated that Amazon is strong-arming part makers into their existing price positions. Several manufacturers have indicated to Amazon a wish to raise MSRP to cover the potential 25% import, as almost none of these products have margins higher than 10%, so the tariffs will make them unprofitable. Amazon has responded with notices that it will not permit manufacturers to pass along increases to consumers. While this is noble in some respect, component manufacturers simply can’t sell on Amazon at a loss -- they’d go out of business. The current proposed work-around is to discontinue existing parts on Amazon and recreate the inventory with new product IDs and higher prices. The time cost of doing this must also be accounted for.

We have a full deep-dive on the new tariffs coming up shortly, including quotes from CEOs and representatives within the industry. We’ll air this content after the September 6 decision.

AMD remained present in the news this week, with both manufacturing level news and executive reshuffling. Interestingly, AMD has elected to shift their focus to 7nm, going “all-in”, as AMD put it. Additionally, they’ve handed over production responsibilities solely to TSMC, as GlobalFoundries has chosen to divert funding and efforts away from their 7nm node for the time being. Fortunately for AMD, the company already planned on using TSMC and was not fully dependent on GlobalFoundries, although multiple suppliers likely would have eased the supply chain. GlobalFoundries expressed an interest to instead focus on improving its financial position and selling higher margin products, namely 14nm and 14LP products. This came as a surprise, as GlobalFoundries was set to begin high volume manufacturing by the end of this year. As of now, all 7nm production is indefinitely held.

GlobalFoundries has announced a shift in strategy, choosing to put their 7nm node on hold for all clients, and instead focus on their 14nm and 12nm FinFET designs. GlobalFoundries cites exponential R&D costs and a lack of business opportunities in the immediate future for bleeding-edge process nodes, but emphasized in an interview with Anandtech that technical abilities were not part of the decision. Extracting more longevity out of mature processes allows GlobalFoundries to focus on shorter-term profits and competition, while gunning for emerging opportunities in low-power chips, RF, and embedded memory. Additionally, GlobalFoundries will be able to reduce their workforce by 5% and will also have to renegotiate their WSAs (Wafer Supply Agreements) with AMD and Intel to reflect the new direction.

AMD will now be relying on TSMC for their 7nm silicon, and assures that their roadmap is still intact.

Also, there’s been another high-profile shuffle in leadership within AMD. This time, Jim Anderson, Senior Vice President and General Manager of AMD’s Computing and Graphics Group, has announced his departure from the company. Anderson was responsible for overseeing all of AMD’s client computing business, and was key to their success strategy with Ryzen. Anderson has left AMD for the CEO position at Lattice Semiconductor. AMD has named his replacement, Saeid Moshkelani.

Tom Petersen joined Hot Hardware on their YouTube podcast last week, addressing questions as to the performance expectations of the RTX 2080 and RTX 2080 Ti vs. the GTX 1080 and 1080 Ti. Although Petersen clarified that he did not have data in front of him, his expectation was that the 2080 may outperform the 1080 Ti in some instances, and when held to a firm answer by the Hot Hardware team, Petersen committed to a rough 35-45% gain in the 2080 Ti vs. 1080 Ti. Petersen is likely not the person running all of the benchmarks, so we’d still encourage waiting for official testing for further information.

The full interview video can be found in our show notes linked below. The Hot Hardware team covered the RTX series for about an hour, and it may contain some new information to you.

Tom’s Hardware founder Thomas Pabst, who left the site in 2007, recently posted a comment on the GamersNexus facebook page to address our Tom’s Hardware video. The response was made to our coverage of the “Just Buy It” article that was posted by Tom’s Hardware’s current Editor-in-Chief Avram Piltch, where, at one point, I jokingly asked, “Tom, what have you become? Look at yourself! I’m using Tom as an all-inclusive term for anyone who writes at Tom’s Hardware.”

Pabst took the question and ran with it, replying as follows:

“You asked ‘What happened, Tom? What has become of you?’ Well, there’s only one person who can answer that!

Tom has become a daddy of two boys and doesn’t have anything to do with Tom’s Hardware anymore.

So far so good.

What does Tom think of the article you love so emphatically?

“Well, I’d say Tom would have been less kind than you have been with his assessment! It is ultimately ridiculous, it is indeed suicidal, and its conclusions are epically nonsensical. There is value in being an early adopter? Aren’t we, who are impatiently into the latest tech, sorely aware of what we keep doing to ourselves when we purchase technology at high prices ‘ahead of the curve’? It’s maso-f***ing-chism! We make ourselves paying beta testers, and wait for software (and often other hardware) that will hopefully bless our brand new tech with the meaning and usefulness they simply do not have by the time of our premature purchase! There are no RTX games, but there is value in adopting Turing early, because current games *might* be faster than on our 1080ti SLI setup? Yes, this is madness, and good old Tom is scratching his head no less than you are, Steve! There’s got to be value in masochism!”

More a cockpit than a chair, Acer debuted the Predator Thronos at IFA 2018. The Thronos weighs 485 pounds, and has room for three 27” monitors plus room for a Predator gaming PC. The Thronos has motorized controls for the footrest, keyboard tray, and monitor arm. The Thronos is also adorned with lighting, and can vibrate or rumble with games, much like a console controller.

No word on price or availability.

FCC Upholds That Single ISP Markets Can Be “Competitive”

Recently, the United States’ Eighth Circuit Court of Appeals ruled that the FCC can define single ISP markets as competitive, as long as a competitive company’s service region is less than half a mile away. Moreover, the FCC is now allowed to “rationally choose which evidence to believe among conflicting evidence in its proceedings”. In short, that could imply that the FCC has free rein to discard compelling evidence from customers or smaller ISPs, when making decisions regarding bigger ISPs or market conditions. It could also mean that so long as single ISP markets can be defined as competitive, those ISPs could be immune to business broadband price caps, which could be detrimental to schools, libraries, hospitals, and government agencies.

Addressing yet another i9-9900K solder rumor/leak, the folks over at XFastest have allegedly got ahold of the unreleased i9-9900K and delidded it. If the images are to be believed, they show solder adhering the die and IHS, as well as gold plating surrounding the die, and a slightly different IHS design.