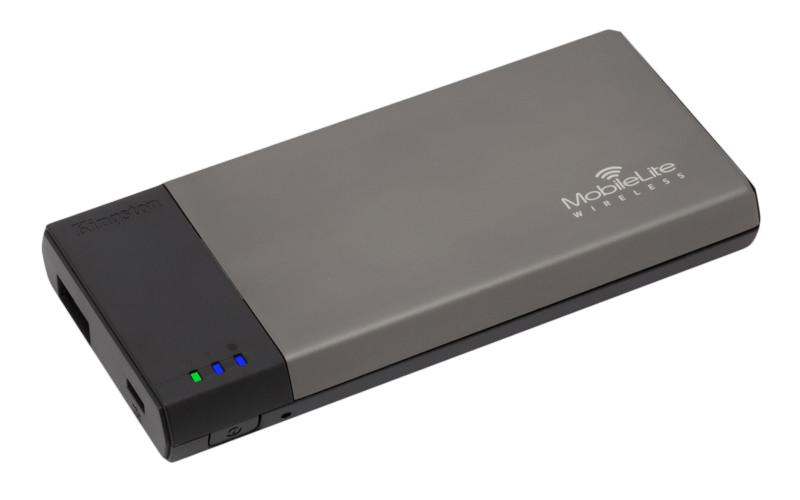 As everyday consumers continue to trend toward heavier utilization of smaller devices—phones, tablets, laptops, HTPCs, what-have-you—storage capacity becomes a more noticeable throttle than previously experienced on desktops. Thanks to some serious compression algorithms and efficient file management on mobile operating systems, we see more effective space utilization than previously -- still, for users who consume storage for large media formats, mobile readers and drives have become a bit of a 'thing.'

This was first demonstrated on our site through coverage of Corsair's Voyager Air, an all-in-one, self-powered standalone drive that effectively operates as a 'family fileserver.' The Voyager Air was marketed at a somewhat bonecrushing $180-$220. At the same event as Corsair's unveil, we received early sample units of Kingston's next iteration of their MobileLite family of remote storage; they're less all-encompassing and more affordable than the Voyager, but have a different approach to wireless storage. Let's talk about specs and applications.

The unit itself doesn't operate as an independent storage device, but does allow connection of SD/SDHC/SDXC cards, USB devices (small form factor encouraged for portability, but not required), and MicroSD cards through adapters. In theory, up to three simultaneous users can connect to the device wirelessly via ad-hoc network or bridged through a router, at which point the users are free to share, offload, download, or stream files to/from the device. The MobileLite Wireless products host a localized Li-Polymer battery that's capable of charging connected devices via a standard USB-to-MicroUSB connector, so piggybacking mobile devices to the unit will enable charging without an outlet. MobileLite Wireless can still be used as a storage unit even when charging devices, from what we've been told, though you'll be burning the battery at both ends.

Kingston's embedded Li-Poly battery is rated for 5 hours of continuous use, according to the company. Lithium Ion and Lithium Polymer aren't too different in terms of our everyday use (neither carry a memory like the deprecated Ni-Cd batteries), but Li-Poly is theoretically capable of greater energy density due to the implementation of an electrolytic-gel-coated porous polymer separator rather than the inert Li-Ion separator.

Using a proprietary MobileLite Wireless application, users of the device can connect iOS devices (Android support soon -- we've been told "within weeks") and use a "camera roll" feature that migrates photo data to remote storage. Streaming video files to connected devices is also possible, and with the 802.11g/n IEEE standard in device-to-device (ad-hoc) networking, the datarate should easily be enough to support high-density video throughput (MXP/FXP high-bitrate formats). MobileLite Wireless uses WPA2 encryption that can be configured through applications. We're unsure at this time if browser support for gateway configuration will be available.

Android users can expect support in the coming weeks. The device is already compatible with iOS products. Check out Kingston's product page for more info: http://www.kingston.com/us/usb/wireless