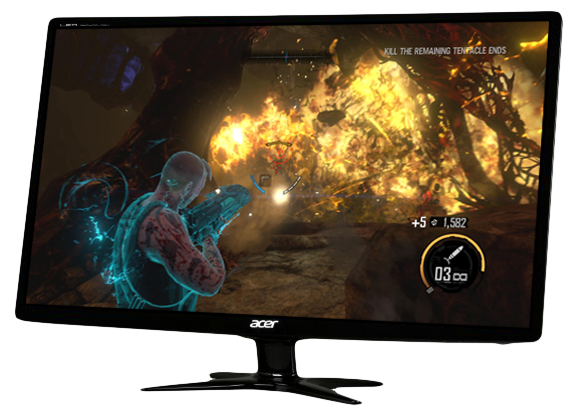 Welcome to another edition of Mik's Picks! I took a little time off for summer, but am back with more gaming hardware deals for upcoming PC builds. I found a fan controller, 1TB HDD, CPU liquid cooler, two great monitors, and a deal on a budget GPU. Without further ado, let's get to the picks.

AeroCool LED 6 fan controller: ($23): First up, I found a fan controller that supports up to 6 fan channels. You just install this to the front of you case, hook up all the fans, and then set your custom fan speed settings. The idea here is that it helps with noise control and performance customization, though custom LEDs offer a bit of aesthetic flair as well.

WD blue 1TB 7200RPM, 64 MB cache: ($60): This 1TB HDD from Western Digital offers you ample storage at solid price, clocked in at 7200RPM (which is what we recommend for gaming) and fitted with more cache than you'll be able to saturate. Given that HDDs of this size were approximately two- or three-times the cost just a few months back, this is a trend we can get behind. I just bought another drive of this model for my wife's HTPC, and GN's Steve generally recommends WD Blue / Black drives on our forums for new builders.

H60 Corsair Liquid Cooler ($50): Here's yet another deal from Corsair on their H60 aftermarket closed-loop liquid CPU cooler (CLC). It's not necessarily as efficient (cost-to-dollar) as a similarly-priced air cooler, but offers reasonable performance, the advantages of liquid blocks (like reduced strain on the board), and aftermarket potential to reduce noise (a couple of low-noise fans will do the trick). The PC will run at lower temps than on a box cooler and that offers not only more OC potential, but also extended lifespan of the silicon.

Triple Pick of the Week!

AOC 22" LED Monitor ($110): This monitor is more for the budget gamer, as opposed to the above mid-range option. The AOC monitor has a 22" LED-backlit display with DVI/VGA connectors (but no HDMI), but still supports 1920x1080 resolution as well as a 50-76Hz vertical refresh rate. This is by no means a "bad" choice, but if you're in the budget spectrum, it's a good entry-level option. That said, we'd encourage the above ASUS monitor if you can make ends meet.

XFX HD 7770 Core Edition GPU ($90): Since this is a website dedicated to all things gaming, I decided to use this capable GPU for our budget-range gamers. For those of you gamers who play games that are not especially intensive (if you're playing the average RTS game, Skyrim, or other similarly low-spec games), this is the GPU for you. Sporting 1GB of GDDR5 RAM with a 128-bit memory interface, you get a lot more from this card than anything else close to the price range. The HD 7770 has an 1125 MHz memory clock (4.5Gbps) and 640 steam processors coupled with its memory spec, and while it's not a 7850, it's damn good for $90. Great deal for the budget gamer, especially seeing how you get Far Cry 3 and the new Blood Dragon add-on (which is f'in hilarious, by the way) for free with purchase!