Shown above: GN sits with Director of Logitech Gaming Vincent Tucker to discuss the new switches. We were unable to show the keyboard during this video due to early prototype status, but the G910 is now feature-complete and is available for showcase, seen further below.

Here's a quick-reference of key features for the new keyboard:

Looking at the Romer-G Switch

Logitech's new switch has completely ditched the multi-color selection popularized by Cherry and (now) Kailh. Instead, the company's switch is strictly the “Romer-G,” available in one type. In our testing period and hands-on time, the Romer G switch is most comparable in overall feel and “clickiness” to Cherry's MX Brown switch, found on Logitech's G710+.

The company's Switzerland-based testing facilities hammered out millions of key clicks on the new switch, ultimately finding that the switches can be comfortably rated for 70 million clicks. We were informed that even just testing 70 million clicks takes several months – and that's with a robotic arm hammering a switch 24/7 – so it's unlikely that users would experience mechanical failure during the usable life of the product. For comparison purposes, Cherry publicly rates its endurance in the range of 50 million clicks, with Kailh hovering in the 40-50 million range (depending on how recent the Kailh products are).

Beyond endurance, the Romer-G switch has made moves to raise the actuation depth to 1.5mm (Cherry MX red linear switches use a 2mm actuation depth). The actuation point is the depth at which the spring gives and registers a key click; theoretically, a higher actuation point will allow easier typing with quicker movement to the next key, which is potentially useful among highly competitive gamers. Depending on the operating force required to actuate the switch, this could also implicate increased chance of unintentional key strikes. Logitech has its own answer to this: Bezeled keycap edges.

The G910 in the demo suite was an early prototype that we were unable to photograph. We noticed that the keyboard was somewhat difficult to learn at first due to its high bezeled keycaps, but were quickly told by Logitech that the finalized version would use a less extreme bezel height. The decision to reduce the bezel height was met after feedback from professional gamers sponsored by the company. The same sponsored teams (including Solomid) have reported that the bezeled keycap edges aid in “sticking” to the correct key when gaming at a high APM.

We can't comment on the ease of typing with the final model just yet – it's on the way to us now – but the high bezel did make normal key actions somewhat difficult (numerous accidental hits) on the prototype. If Logitech has done its research and lowered the bezel an appropriate amount, we're hopeful that the overall high-quality feel of the switches will be adequately showcased.

Aesthetically, the Romer-G switch has pretty glaring differences from what we're used to. Kailh is regularly accused of heavily borrowing from Cherry's switch design, both of which feature a plus sign-like plastic clip centered beneath the keycap. LED-equipped keyboards place the LED beneath the switch mechanism, reducing overall brightness and bleed as the light must first pierce the switch. Logitech sees this as inhibiting of backlighting brightness and spread, and has adapted the Romer-G accordingly. As seen in our switch image above, the supporting (square) mechanism flanks the LED on all sides; in between the four switch mechanism walls rests a lens to amplify the LED brightness, with the LED resting beneath said lens. Theoretically, this ensures a brighter, more equal distribution of light across the keycaps and the keyboard. 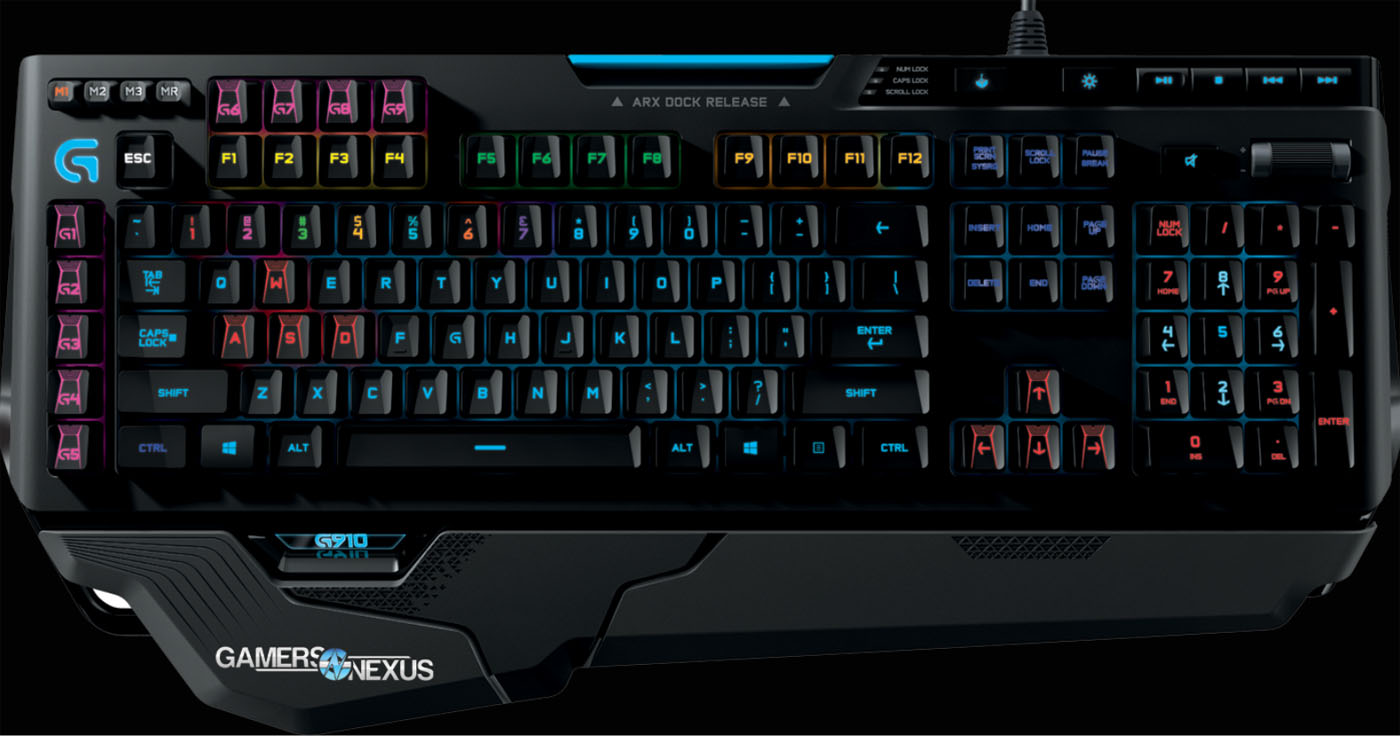 The championing keyboard of Logitech's new switch is fairly feature-packed. Our only image of the board can be seen above (photography of the prototype was disallowed unless specifically focusing on the switches). Let's run through all the features, left to right.

The usual set of macro profiles can be found in the top-left position, where four keys exist to switch between various pre-programmed game profiles. Each profile contains backlight data, key mapping, and macros for the G-keys. As discussed in the above video, Logitech's software and firmware will allow for keys to be lit according to cool-down timers within games. DOTA was used as an example, though MMOs make just as much sense: If you've got a spell / ability tied to “1” in your game of choice, the key could be programmed to light “blue” when available, “red” when burned, and pulse / glow yellow when it's about to cool-down. This is something that requires participation by game developers, but it is a distinct possibility.

Moving to the right, the only feature that jumps out is the “ARX Dock Release” (top). Logitech noted that it would not immediately continue the LCD panel used in its X15 series (G15, others), but the company has compromised with a mobile application and docking station. If you so desired, you could run the usual system resource utilization reporting software through your phone, then dock it in the keyboard. Not something I see myself ever doing (especially without a hot shoe to properly charge the phone), but I suppose it has uses.

The rest is fairly standard. Media keys, a cord, and that's about it. The G910 no longer features USB ports on-board.

The G910 Orion Spark keyboard is priced at $180 MSRP (despite what we say in the video – it changed) and will be available effective immediately. More information can be found here: http://www.gaming.logitech.com/news/orionspark