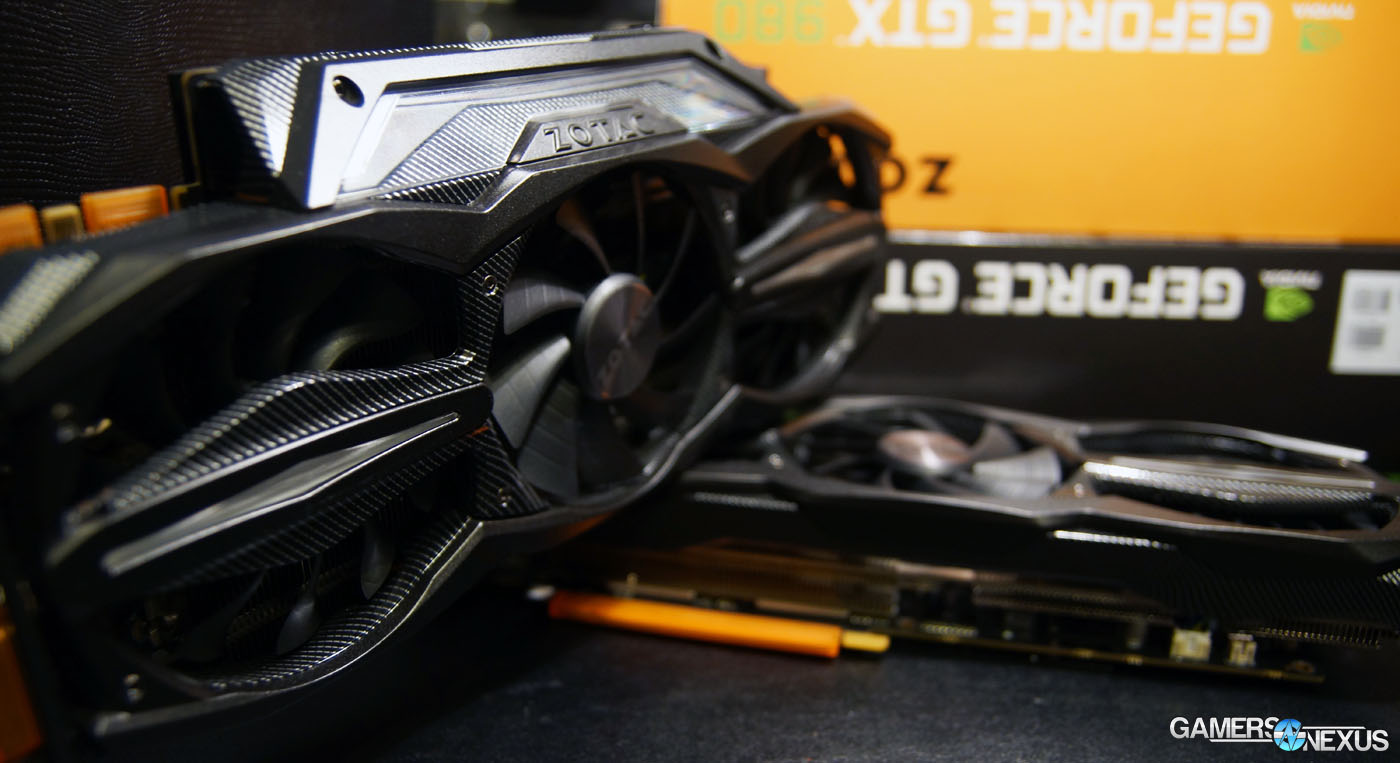 Note first that this is not a review. We have faith that the GTX 980 Extreme could be one of the best overclocking cards available right now, but we're waiting for some updates (detailed below) to ensure that dream is realized. The review will come once we feel confident that the issue has been resolved. Zotac is not presently shipping the GTX 980 Extreme and expects to have our concerns resolved prior to channel availability. This post is based on a media sample, but still, we've got to look out for our readers and make sure you all wait around for our full review before spending any money.

We received two GTX 980 Extreme video cards for SLI testing. The card is slated for release in the next few weeks in North America, with the MSRP hovering $60 over the GTX 980 reference's $550 – so that's $610 MSRP for the 980 Extreme. We did not take into account supply/demand fluctuations, so both those numbers are base MSRP prior to the global 980 shortage. The ASIC quality of our primary DUT (device under test) is about 71%, so while it isn't pristine, it's plenty good to sustain mid-range overclocking with the right tweaking.

Zotac has also developed an in-house solution for software-driven OC tuning, called “FireStorm,” and boasts more granular voltage control with thanks to an attached-to-device USB cable. The cable connects straight into a USB power slot on the motherboard, in a similar fashion to how some liquid coolers communicate to the host. FireStorm gives us control over the usual suite of items, to include: Clock frequency (boost clock adjustment), overvoltage (mV offset), maximum power over reference (adjustment over 100% TDP), GPU vCore, and memory settings.

Maxwell overclocking is somewhat unique, but that's a discussion for my next post. When driving the core clock up, you eventually hit a stability wall that demands increased voltage in order to sustain a higher clockrate on the GPU. This is true for all overclocking. The problem with Zotac's unit, though, is that the BIOS seems to be locked at a voltage of 1212.5mV, which is lower than my reference model's maximum overvoltage of 1265mV. To confirm this finding, we extracted the BIOS from two reference 980s and two 980 Extreme video cards, then used Kepler BIOS Tweaker to investigate the BIOS limitations; the 980 Extremes cannot surpass 1212mV – or 1.212V – and thus struggle to even achieve a measly 1510MHz boost overclock against the Extreme stock of 1393MHz. Considering that I casually pushed a reference GTX 980 (from nVidia) up to 1593MHz from a stock of 1216MHz last night in my free time, that's somewhat concerning.

Let me put that into perspective.

I overclocked my best reference GTX 980 to approximately 1593MHz from 1216MHz. That means the frequency was clocked +377MHz over base. The GTX 980 Extreme begins to lose stability at 1510MHz, which is a +117MHz overclock over its base (or +294MHz over reference base). Depending on which numbers you look at, that means the reference card is OCing a conservative minimum of nearly +25% better than a card that costs $60 more and is advertised for “Extreme” overclocking.

So why doesn't it work? 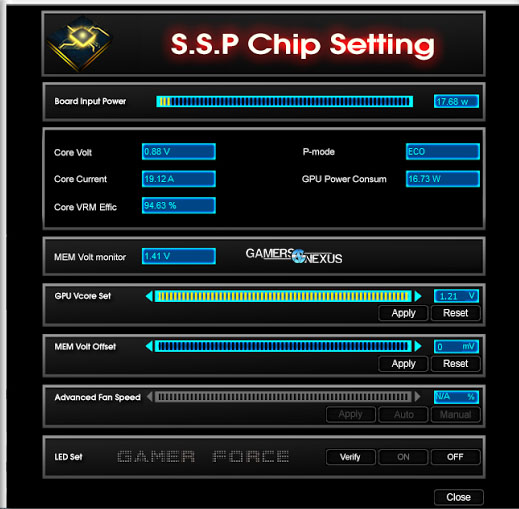 Notice that we cannot exceed 1.2v for the vCore. Our other cards -- and third-party reviews will confirm this -- can push anywhere from 1.24 to 1.26v.

In order to increase the clock beyond 1510MHz and retain stability on our Extreme, the card demands voltage or additional power over TDP to continue operation. This is normal. In this instance, however, we cannot feed either of those to the card, and so it sits at 1510MHz at best. I was technically able to achieve a brief stint of 1540.5MHz – still worse than reference – but texture tearing, black screen soft crashes, and driver failures ran rampant until I de-clocked it back to 1510MHz.

Overclocking Maxwell, explained very briefly, doesn't use as much overvolting as done previously; instead, Maxwell relies on increasing the power fed to the card over stock TDP. In the case of a reference card, stock TDP is about 165W. My 1593MHz OC I mentioned had me pushing 123% TDP to the card, meaning I turned a 165W card into a ~203W card in effort to sustain higher clockrates and voltages with stability. This is very easy to do and creates a reliable overclock, but sucks more power and increases heat. Both of those downsides are OK with the right setup, but that's really not the point of this post to explore.

This OC was burned-in for 4 hours and did not fail. If I were to spend another hour or two tweaking the settings, I can guarantee that we'd be overclocking the memory clock a few hundred MHz in addition to the boost OC. This was at 123% TDP and a +24mV OV.

I spent the better part of a day trying to understand the 980 Extreme and came nowhere close to the above.

The GTX 980 Extreme can't exceed 1.212v, and so it is suffocated for power when it needs it. When I extracted the BIOS and inspected it, it became clear that the 980 Extreme is (for some reason) locked to this maximum voltage; even stock voltage is questionably low. That's lower than what reference allows and lower than what every other competitor allows. I am almost entirely positive that this issue lives in the BIOS. A BIOS update and flash should resolve all problems, if Zotac would properly unlock their voltage. Perhaps this is something to do with Zotac attempting to force users into using their FireStorm software, but it's really anyone's guess at this point.

I'm considering flashing the BIOS using an ASUS Strix or reference 980 BIOS that's better, but I don't want to brick one of our only test Extremes, so we'll patiently wait for more updates from Zotac.

It should be noted that Zotac's US-based marketing team has been working tirelessly with our staff to determine the root cause of this issue. They have taken all of my feedback and brought it to the firmware programmers, then further assured me that the BIOS would be updated prior to channel availability. It is clear to me that Zotac's US marketing team acknowledges this issue and is vigilant about resolution prior to consumer launch. It's also clear to me that they're patient – only the overlords of Google and Skype can know how many messages I've spammed the poor team with.

Emphasis and Clarity – Your Next Actions

Three further items should be heavily emphasized: (1) A BIOS update is easily applied by the end-user in the event it does not land on the device in time; (2) ZOTAC is aware of this issue, this article, my entire weekend of testing, and seeks rapid resolution before sale; (3) The device as it stands now should not be purchased – if you wanted to OC a card, you'd be better off buying reference in the Extreme's current state. Do not pre-order a GTX 980 Extreme until I can validate that overvolting works properly.

I'm excited to see the GTX 980 Extreme functioning, when it finally happens. As someone who spends the better part of every day testing GPUs in some capacity, it is an incredibly exciting video card from a design standpoint. It's just missing some BIOS fixes, at the moment, and could use a serious revamp of its OC software. The overclocking potential of this card, especially given its high TDP allowance, could allow for a lot of fun in the enthusiast spectrum.

That said, I can't in good conscience allow our readers to pre-order or purchase the GTX 980 Extreme until we know it works properly. Please exercise patience and keep eyes on our twitter, facebook, YouTube, and home pages for the full review. I'll push it to the limits as soon as that's possible, then let you know if it's worth a buy as BIOS is (hopefully) fixed.