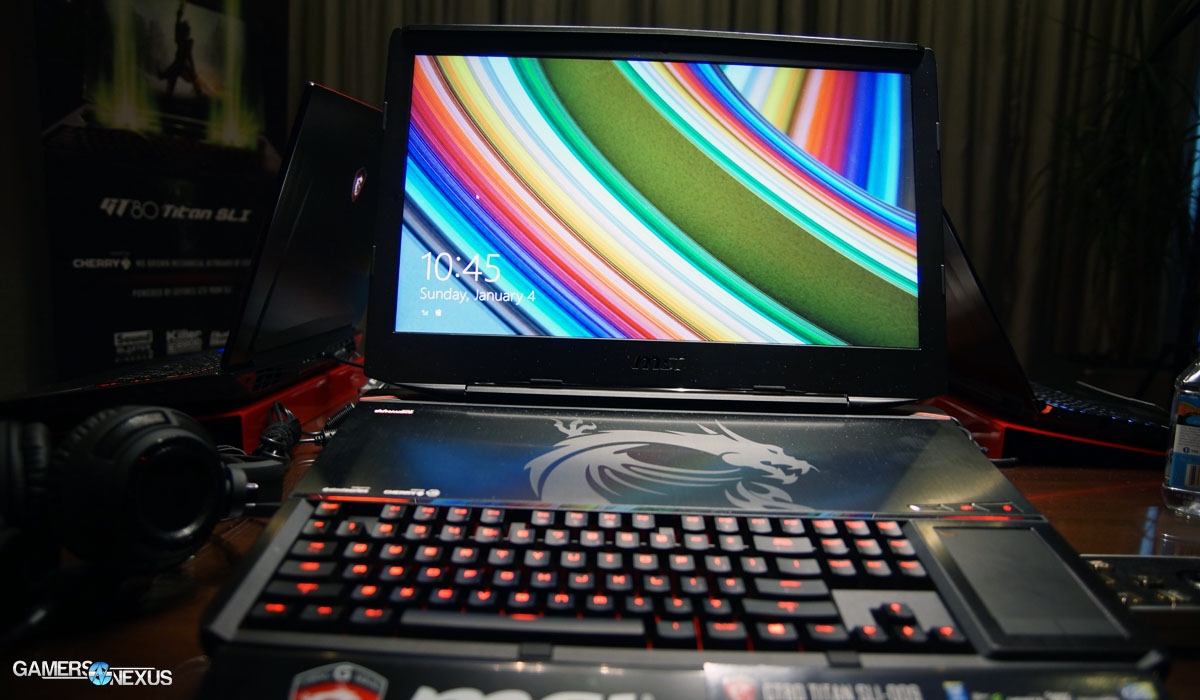 We opened CES 2015 with a tour of MSI’s gaming suite, home to the company’s new monstrosity of a gaming laptop: The GT80 Titan. Among new video cards, unique docking stations, and accessories, MSI’s most interesting product for 2015 is its unholy fusion between a mechanical keyboard and an 18” notebook. The GT80 SLI Titan is the world’s first gaming laptop with a mechanical keyboard, bolstered further by SLI GTX 980M GPUs.

The GT80 Titan gaming laptop is a “desktop replacement” in every sense of the word, perhaps moreso than its predecessors given a true desktop-style keyboard. In coordination with SteelSeries, MSI’s GT80 utilizes Cherry MX Brown switches with standard size keycaps and fairly standard spacing. The laptop ships with a gel wrist rest and positioning options to allow a more natural alignment with the keyboard, as one would expect on a desktop. As a throw-in, MSI includes five gold-colored metal keycaps for use on the GT80. 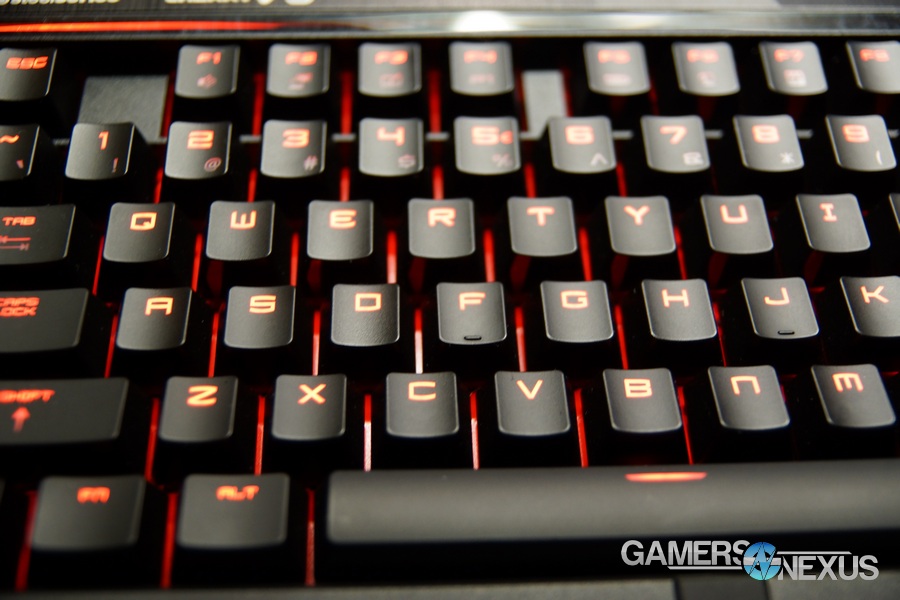 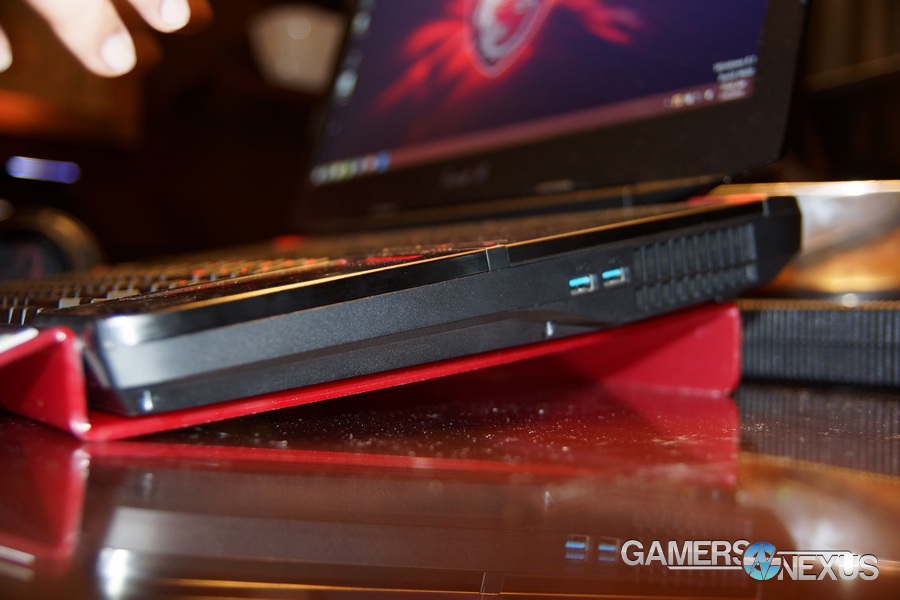 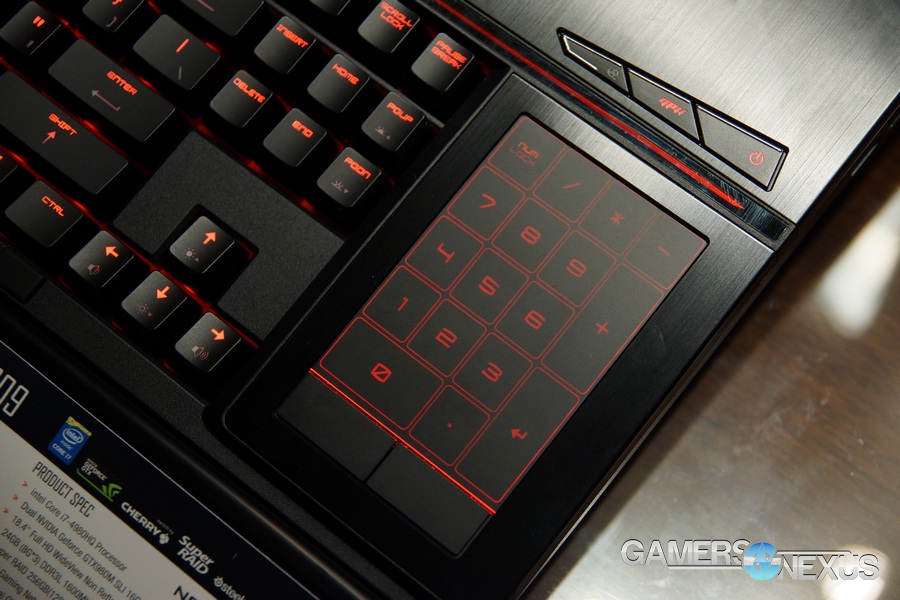 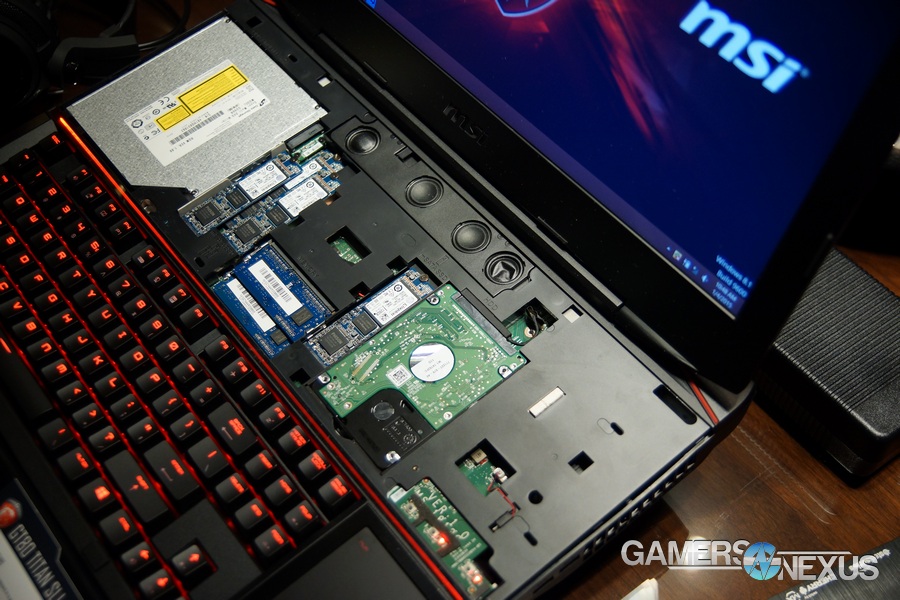 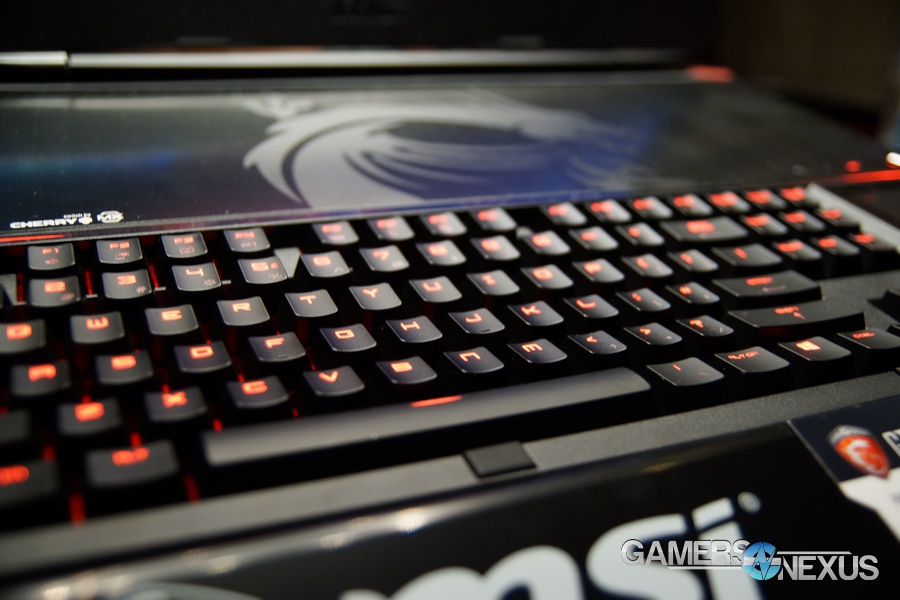 MSI’s GT80 ships with 2xGTX 980M GPUs in SLI, each with 8GB of GDDR5. The system ships in several different SKUs, but the one we looked at hosted 4x128GB M.2 SSDs (configurable up to 4x256GB) and could support 4x8GB of 1600MHz DDR3 memory. For its graphics hardware, the unit makes use of MXM video cards that allow for modular upgrades and replacement of the stock display adapters.

An 18.4” 1080p display doesn’t make for mind-blowing resolution, but sticks more realistically to the GT80’s performance limitations than some competing 4K devices do.

The audio system features four drivers near the top of the chassis, with a discreet subwoofer mounted on the underside of the laptop. The subwoofer is able to use its positioning to propagate audio through the chassis in a bassy manner.

Cooling is always a concern with gaming laptops, which seem to favor exhausting piping-hot heat out of one side of the system. We didn’t have enough hands-on time to run benchmarks and check thermals, but we were able to get a look at how the cooling is routed.

MSI is using 8 copper heatpipes across all of its processing units, mounting two fans centrally to intake and exhaust air through the bottom and sides.  Unlike most other gaming laptops, the unique design of the GT80 allows it to position its cooling in a way that allows even distribution of heat.

As someone who’s taken apart far too many laptops in his life, the GT80 offered excitingly informed chassis assembly. The reason we haven’t seen mechanical keyboards integrated with laptops in the past is simple: Size. It’s impossible to fit a proper mechanical switch and stem into the body of the average mobile unit. By giving the keyboard an entirely independent and forward section of the laptop, MSI is able to support a mechanical board while also boosting accessibility. Digging into the drive, DIMM, and GPU section of a laptop normally requires removal of several underside screws and the keyboard (attached by ribbon cable). With the GT80, the user removes two screws from the bottom side of the case, then slides the cover off for uninhibited access.

Size and weight aren’t necessarily as critical in a “desktop replacement” gaming laptop. This isn’t meant to be portable, and MSI knows it – it’s a portable desktop, in that it’s about as hard to move around as one without the peripheral requirements. MSI includes a custom backpack with its GT80 that is guaranteed to fit the 18” behemoth, but that doesn’t change the fact that it weighs nearly 10 pounds.

And it definitely doesn’t help price: The GT80 Titan starts at $3300 and scales up to $3700, depending on options selected.

The GT80's assembly is beautiful to anyone who's ever had to cannibalize a laptop. It's great under the hood and easy to access, the mechanical keyboard is at least innovative and risky, and it's got strong hardware. As for my impressions, I'm not sure I'd ever see myself using it -- at around $3500, you'd be able to build a high-end, semi-portable desktop. Not quite the same, but worth noting for users who would want the laptop for LAN parties.

Still, it's expensive, 10 pounds, and not meant to be carried around. The laptop is cool for its unique features, but that doesn't necessarily mean it's practical. If you're a die-hard mechanical keyboard user and would prefer to own a true "portable desktop" rather than a proper desktop, this is worth a serious look. The build quality is superb, the component selection mostly makes sense, and it's got a mechanical keyboard. The rest comes down to price and practicality for your needs.

I do wish the screen were slightly higher resolution, though, even if it meant sacrificing elsewhere.