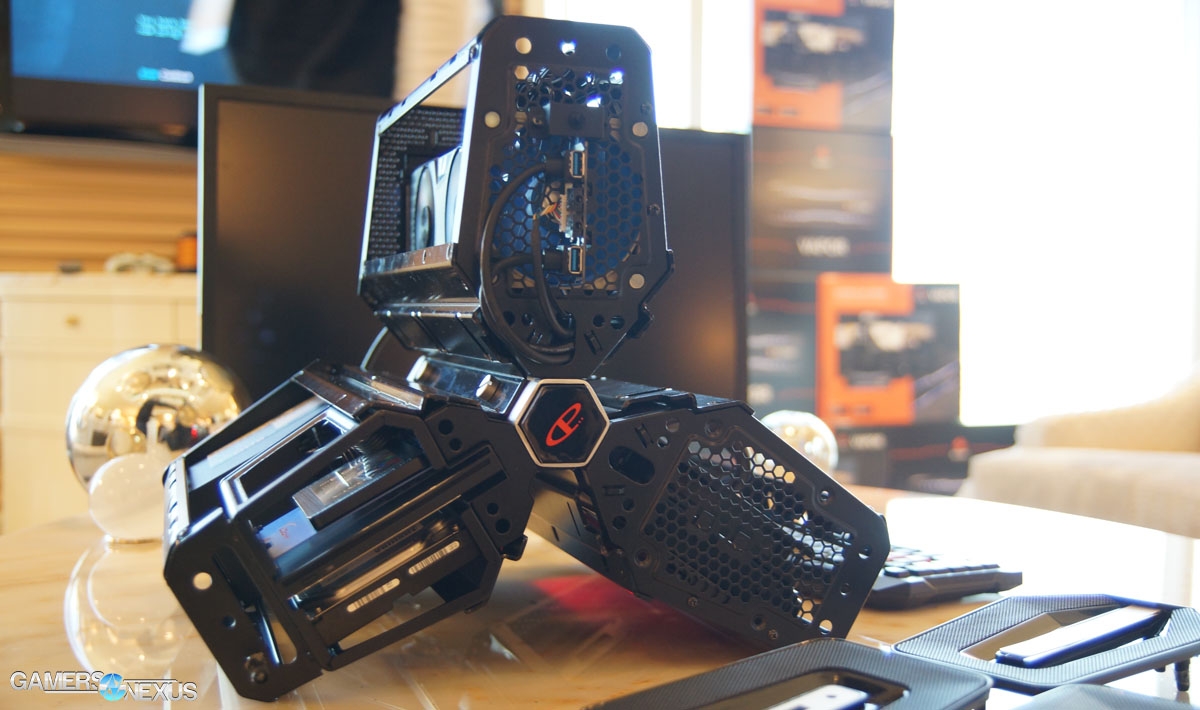 Computer cases are exciting up until a point -- a point of 90 degree angles. There are only so many rectangular pieces of metal you can get excited about each year. Case manufacturers change up the game to get coverage at tradeshows -- often leveraging case modders to modify existing enclosures -- but innovation occasionally shows itself.

Cooler Master showed off their HAF Stacker at PAX Prime a few years ago, reviving a decades-old concept of vertically stacking multiple systems. Alienware showed off its Area 51 case last year, a tiltable enclosure to allow easier access to the I/O panel. At CES 2014, Razer showcased "Project Christine" (either in limbo or now-defunct), a modular approach to system assembly.

CyberPower is working closely with DeepCool, experts in aftermarket PC cooling, to produce the "Trinity" case for their new "Fang Trinity" gaming PC. In some ways, the Trinity case resembles a Star Wars Lambda transport or "inverted Tri-Force," making for an eye-catcher. The Trinity isn't modular, but it's a compartmentalized case that separates the motherboard, PSU/drives, and GPU into independent containers that are attached centrally to a cable routing channel. The case is entirely made of thick, durable steel, ensuring an average post-build weight of nearly 50 pounds; an aluminum alternative is on the planner, but would retail for significantly more due to the material cost. 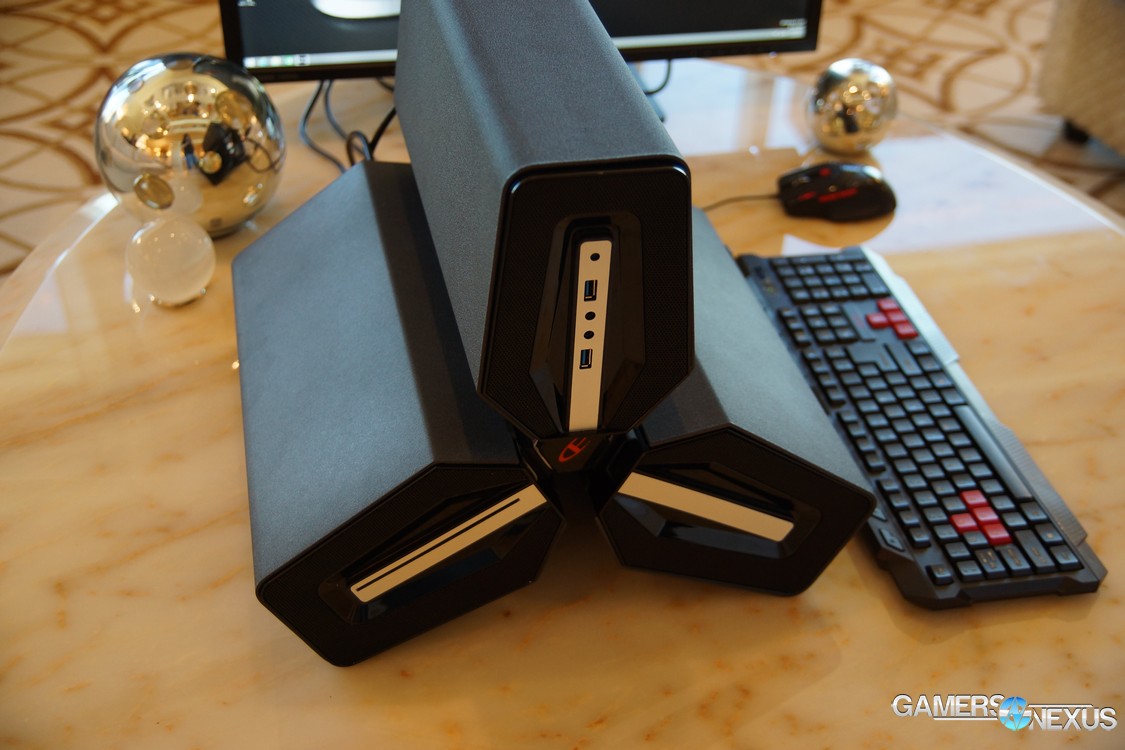 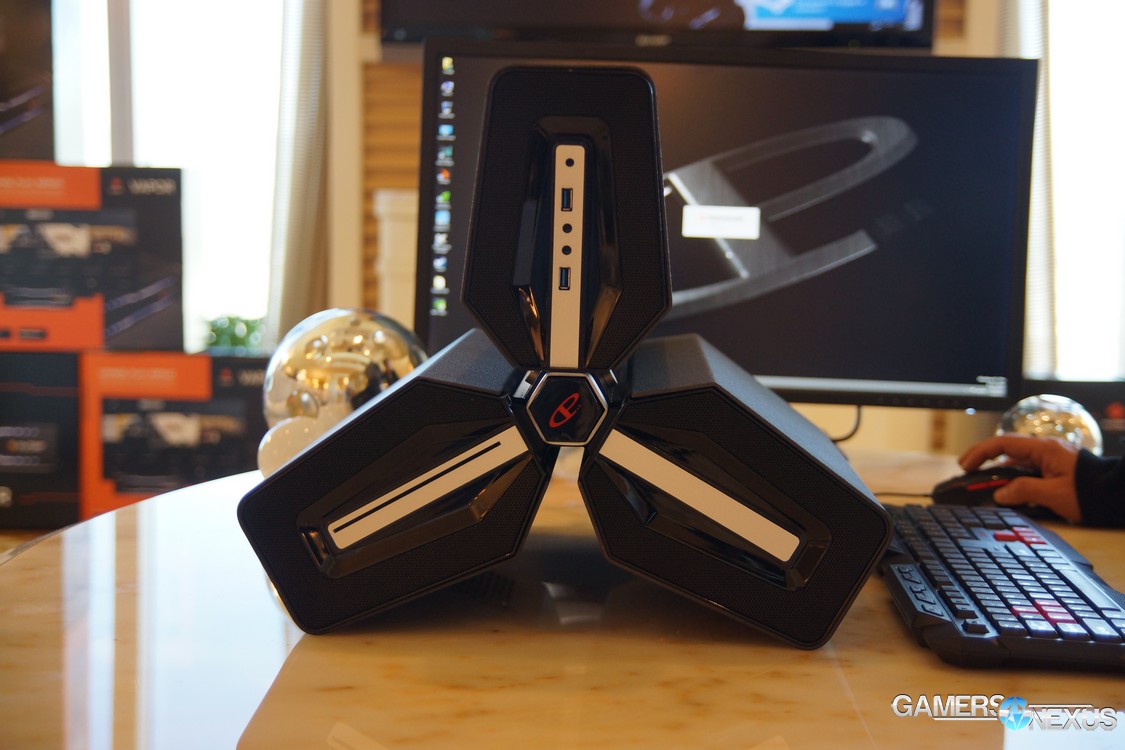 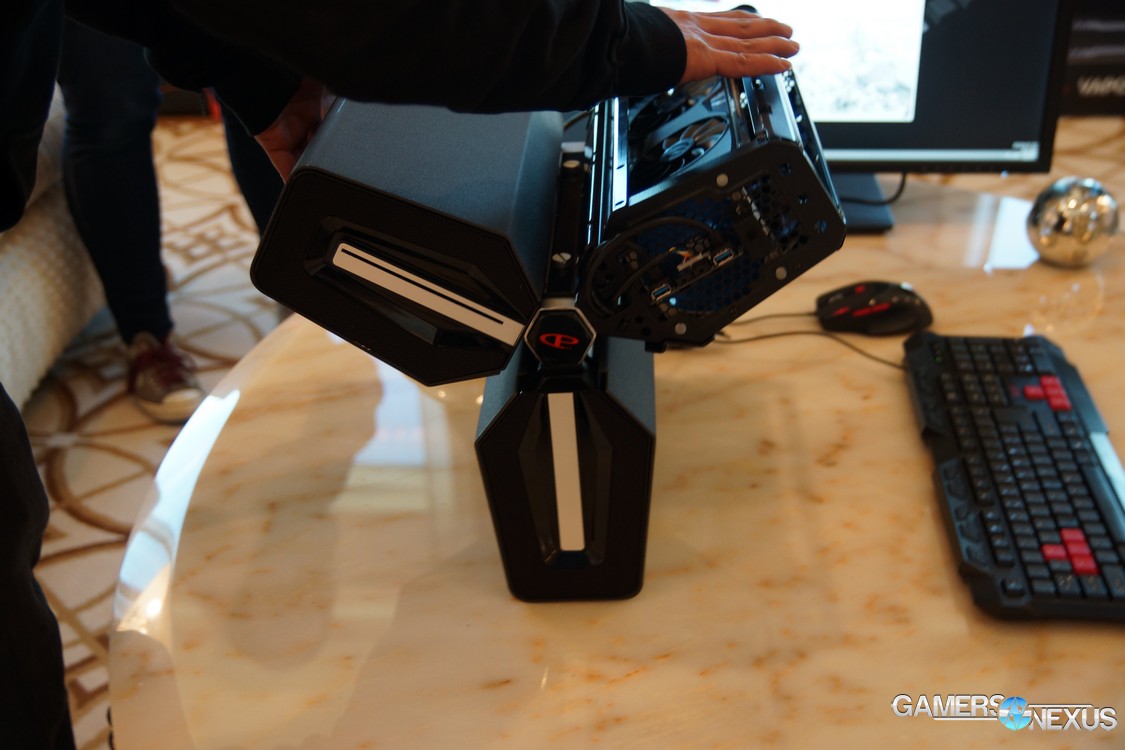 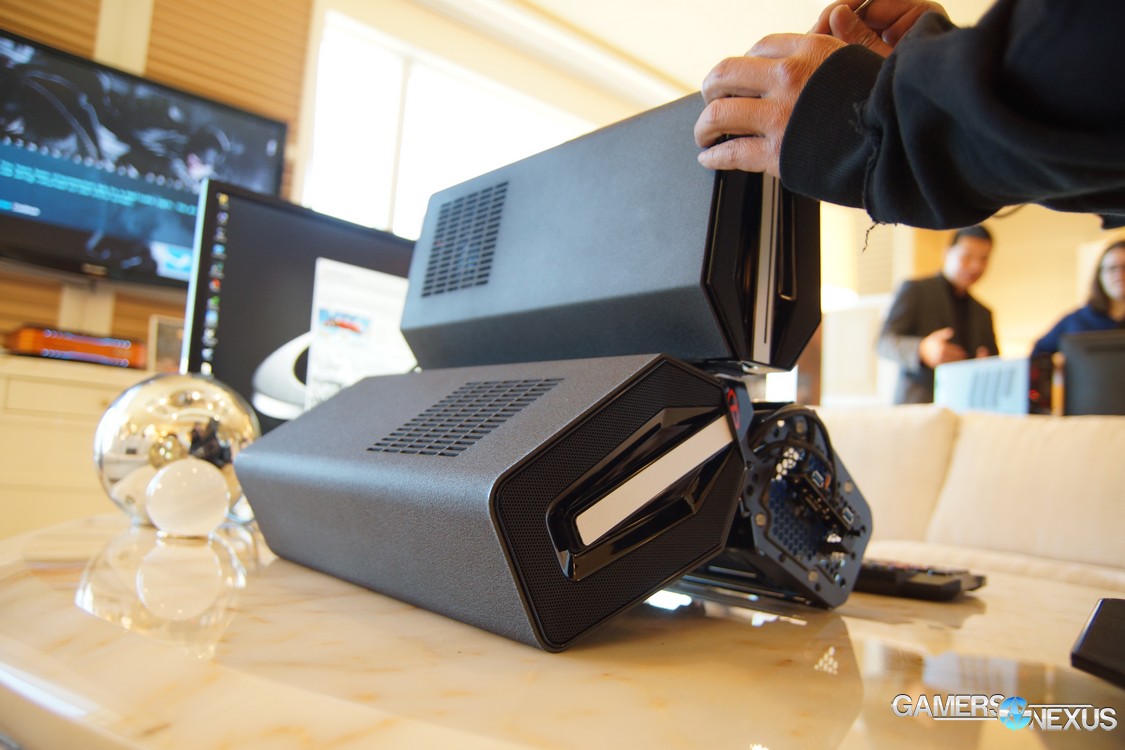 The Trinity case spikes out in three prongs and rests on two, with one pointing straight upward. An adventurous user could balance the Trinity atop a single prong, though it'd be a bit precarious without a custom stand. Each prong is shorter than 12" (exact specs not known) from center to the end, supplying ample space for mini-ITX motherboards. The entire unit is about 13-15" in depth and about 15-18" wide (one prong to the other).

Full PSU support is offered, including longer 1500W PSUs. The GPU compartment will support a single, full-length video card and uses a flexible PCI-e bridge to connect to the motherboard. This adds an insignificant amount of latency and shouldn't be a concern for gaming performance.

In terms of hard specs, the Trinity supports 3x2.5" SSDs on the rear side of the PSU mounting bracket, with an additional 2x3.5/2.5" slots toward the front of the compartment. A word of caution: Performance HDDs generally don't appreciate being mounted at an angle, so while support for rotating the Trinity is offered, we'd discourage rotating the HDD compartment anywhere but straight up.

The central channel offers a very press-able power button with cable channeling. Extension cables are routed through this channel, attached to which are the component power cables (snapped-in from individual compartments). We found this design to be a clean and clever resolution to cable management problems unique to the case. 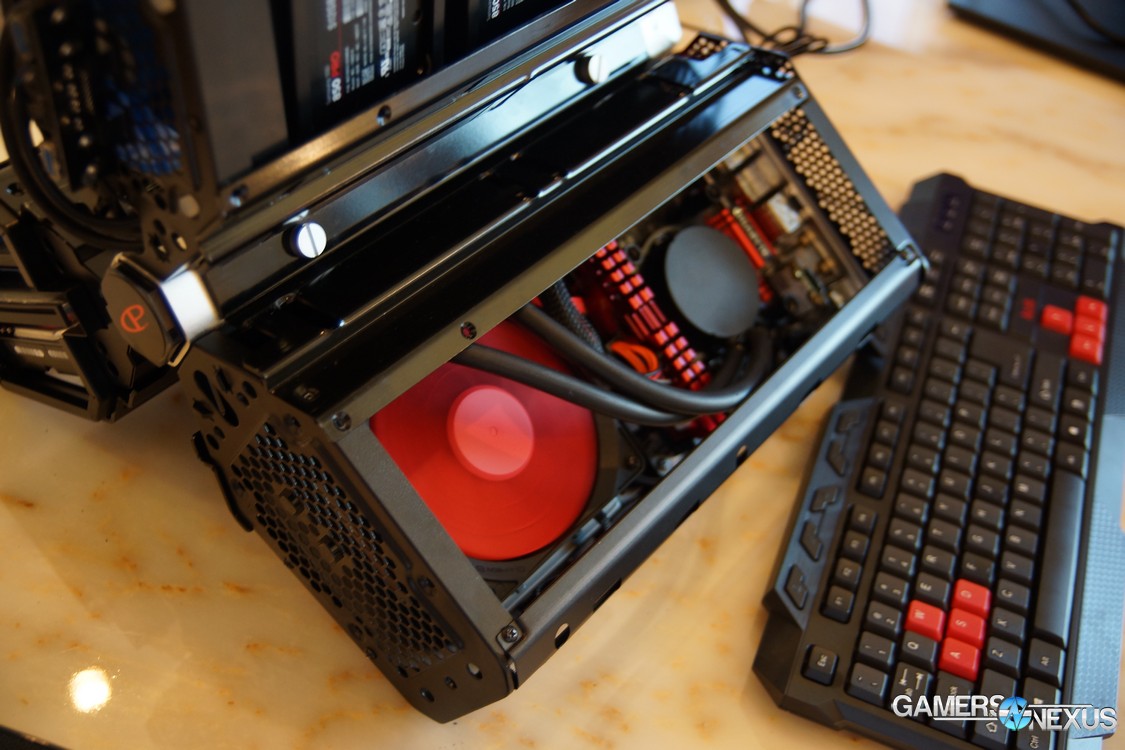 The Trinity enclosure will be priced at around $350 as a standalone unit. It's a big price-tag, but not unreasonable for the massive amount of steel and tooling required. In-Win's D-Frame launched at $400 in limited quantity, so there is a market for these types of cases -- it's just not for everyone at that cost. A full system build would be the cost of components + labor + the enclosure, so that'll be determined by the user. We were assured by CyberPower that although building will be more difficult than an average system, the assembly cost would not increase. You'll be paying the difference between some other case and the Trinity, so build cost is increased by $350-$X, where X = the cost of the standard case.

DeepCool's engineering is high-quality, as always, but we're holding our breath to test noise levels, thermals, and accessibility until a review sample arrives. I'm concerned about the noise of the pre-installed 90mm fan and its ability to cool, but the thickness of steel should help buffer noise and the natural air tunnel produced by the compartments may aid in thermals. I hope CyberPower decides to introduce other accented color options -- I feel like if you've got $350 for the case (which can be purchased standalone), you're enough of a showman to potentially warrant more than just a flat black.

It's an interesting design, that's for sure. I like the enclosure in concept and in execution and found the solutions to obvious problems (bridges for components, cable routing) to be clever. At $350 for just the case, it's certainly an enthusiast's toy. The case is huge in all dimensions and not necessarily practical, but it's unique. Whether that unique flair is worth the extra cost is entirely up to you as a user -- I can't make that decision. The pricing is fair for the amount of hardware involved, though.

Recapping: Build quality, design, and execution are good. I'm concerned about the 90mm fan's abilities and noise, rotating a hard drive on a 120* angle, and general size and post-build accessibility. You won't really be moving this around. The price is too high for most builders, but the same people who can afford a D-Frame would likely be interested purveyors of the Trinity. I am legitimately impressed by the vision for the Trinity and found its tooling to be well thought-out, despite the obvious price and mobility obstacles that limit the audience. Builders with a massive budget and an eye for the unique should be paying attention to the Trinity, especially with DeepCool backing it.