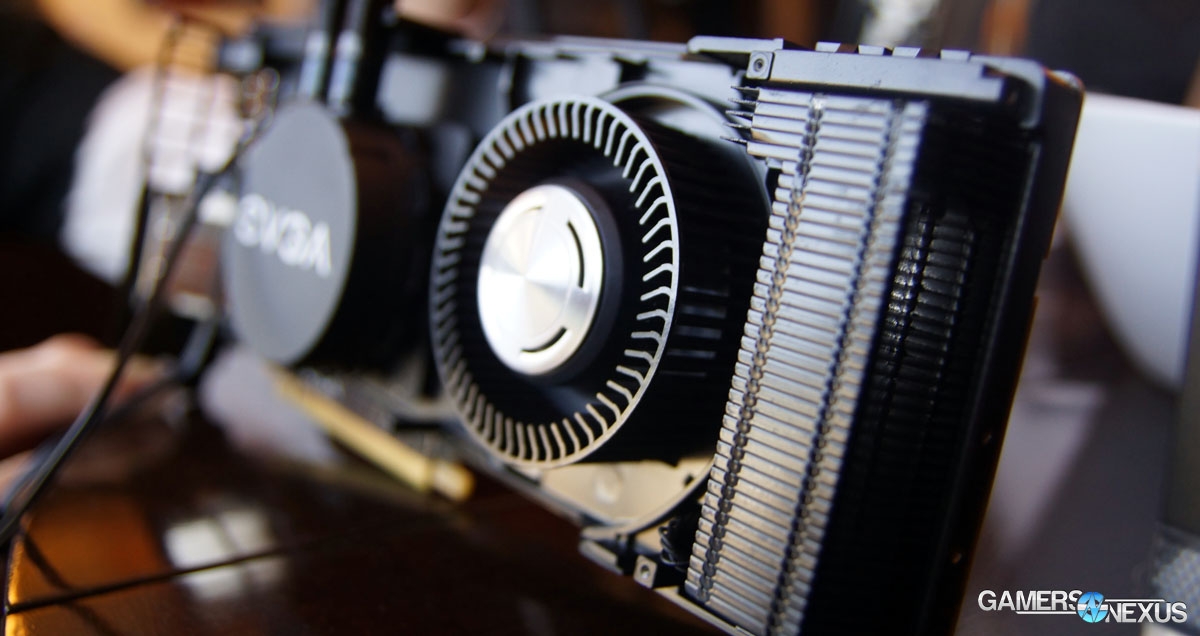 Maxwell architecture has effectively been solidified in the market at this point, a statement firmly reinforced by the onslaught of aftermarket high-end overclocking cards beginning to ship from various board partners. EVGA's CES 2015 suite spotlighted its new KINGPIN version of the GTX 980 alongside a CLC Hydro-Copper version of the GTX 980, both allowing additional OC headroom and other features.

The KINGPIN series is in-part designed by world-renowned GPU overclocker "K|NGP|N." EVGA works closely with the overclocker -- as exhibited by their previous-gen GTX 780 Ti KINGPIN card (regularly available at $570) -- and has taken his demands under advisement when designing the Maxwell GTX 980 variant on the Kingpin brand. The new KINGPIN GTX 980 has several extreme OC features, including memory "heaters," a 14-phase power design, 3 BIOS chips, EVBOT support, multimeter read-outs, and ACX 2.0. 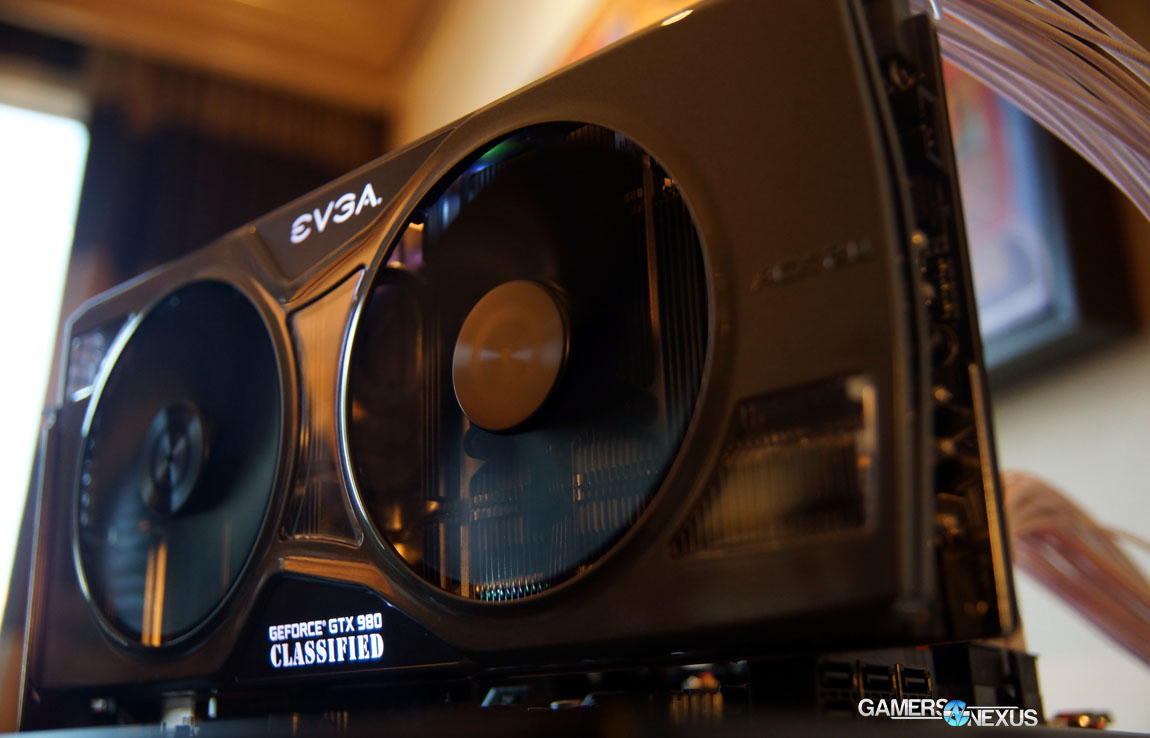 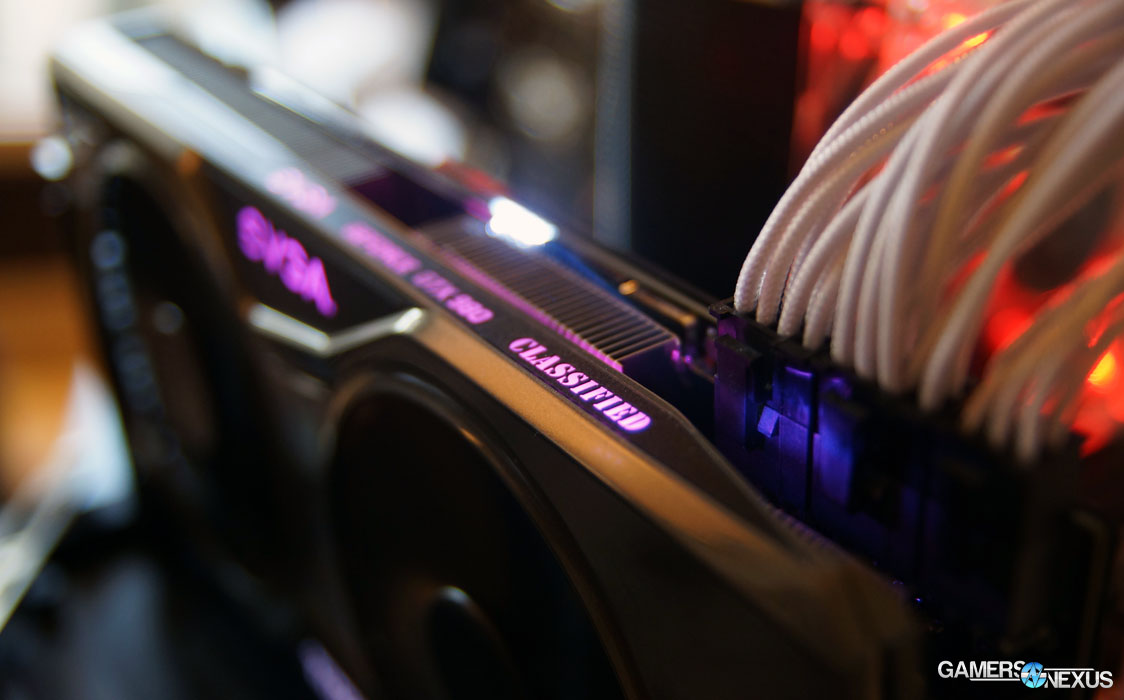 The memory heating element was added for LN2 (liquid nitrogen) overclockers. Although the GPU and VRM benefit from LN2 in extreme OC use cases, memory that gets too cold (-30, for instance) can experience instability and limit overclocking endeavors. EVGA's memory heater keeps the memory warmed to what the company deems an optimal temperature for such overclocking applications.

The VRM is a similar design to what we've seen from EVGA before. With Maxwell now under the hood of KINGPIN, the power target % (explained in our OC guide) can now be increased beyond reference to allow "greater than 300W TDP, but it could be more -- we don't have numbers at this time." This is backed-up by the power pin-out, requiring 1x6-pin + 2x8-pin connectors to pipe additional wattage to the chip.

A standard ACX 2.0 cooler is mounted to the video card with no CLC, as KINGPIN really is meant to be fully-utilized by folks who will be hacking the card in various ways or custom cooling it.

Three individual BIOS chips are present on the board, granting confidence when hacking firmware for finer voltage tuning or clock modifications. If the firmware is bricked in an update, the card can switch to a second (or third) chip for future attempts. This also allows easier modifications when tweaking firmware hacks. 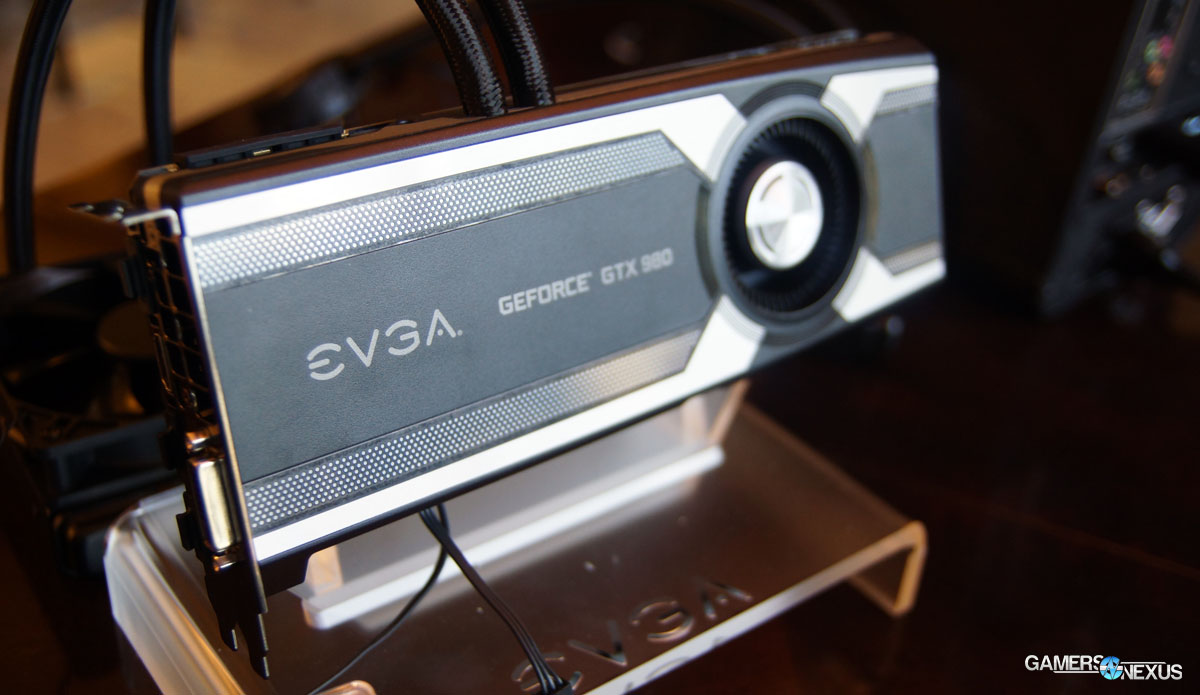 Other than the KINGPIN, EVGA had an Asetek-cooled GTX 980 Hydro-Copper present with an accompanying squirrel-cage fan for heat dissipation. The primary market for the Hydro-Copper seems to be users who demand silent cooling rather than overclockers, though the nature of more efficient thermal dissipation lends itself to greater clock potential. EVGA told us that the Hydro-Copper under 100% load operated at "about 40-45C," which is a promising preliminary metric for the card. We'll try to get hands-on with this one for further validation once released.